After almost two years of a long distance relationship that has involved numerous trips to Boston, I finally convinced A to come along for a weekend visit. This allowed me plenty of time to amass a weekend's worth of "favorite" spots to eat that I could now share with A. In my opinion, a weekend in Boston is not complete without a late brunch at Zaftig's, a Jewish-style deli in Brookline. It's no secret that this place is good- we typically wait at least an hour for a table, and it has won a series of accolades that would make any successful restaurant envious. 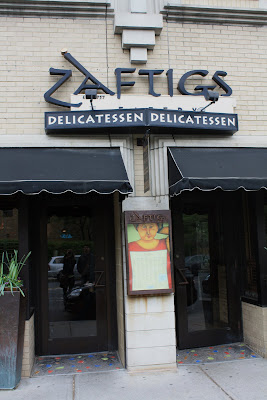 We're typically served bagel chips with a sweet cream cheese spread to snack on while we wait, but they didn't seem to be offering it this weekend. Quite sad. We spent a decent amount of time weighing our options (and there are MANY on this menu), and I eventually decided on something I hadn't tried- the quiche and mixed greens ($9.95). I chose the ham and cheese version over the veggie, which I am sort of regretting. The quiche certainly had potential- a flaky crust, thick layer of firmly cooked eggs encasing chunks of ham, caramelized onions, and shredded cheddar. However, I think the premake-and-reheat combination for this type of dessert dish did not do it any justice. The eggs ended up a bit rubbery and the crust gummy. A good smear of ketchup helped, but thats not typically my style. The mini side salad was great- dressed simply with olive oil & lemon juice and a touch of salt and pepper, just the way I like it. The greens hid a surprise pile of sweet, ripe strawberries. 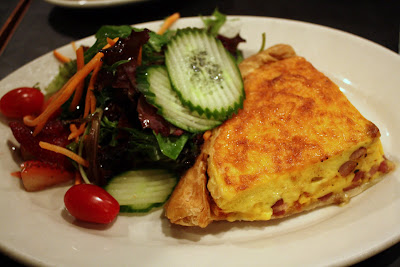 Since I'm a bagel fiend, I also ordered a whole wheat bagel on the side ($2), which comes with a healthy serving of cream cheese. Lightly toasted with a nutty flavor, chewy and slightly sweet. It's hard to get a good bagel in Philly (recommendations welcome) which makes ordering a fresh bagel from Zaftig's a must. 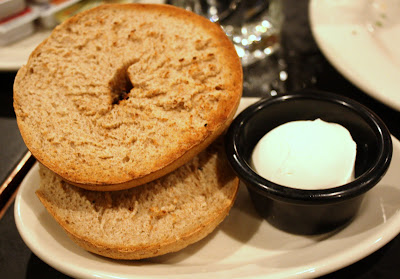 A ordered a couple of smaller items, starting with a cup of cold borscht ($3.75). The thin beet soup had a terrific flavor with lots of interesting additions- a solid golf ball blob of cream cheese, chopped potatoes, scallions, and (my favorite) chunks of half-sour pickles. The cup was a notably small serving, exacerbated by the deliciousness of the soup- just a good mix of ingredients that was easily something that you would want to continue eating long after it was consumed. 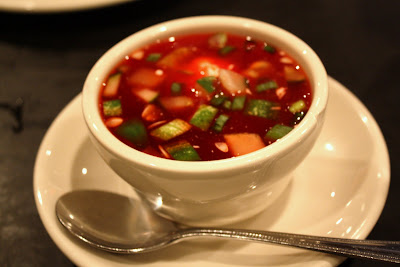 She also ordered something off the starter menu, the loaded latkes with smoked salmon ($8.95). At the base of the pile was a small dollop of dill sour cream. Next up, a dense ball of thick shredded potato well-crisped in the deep-fryer. A few slivers of smoked salmon and then the layers repeated. Trout roe added an extra dimension of smoky saltiness. The latkes themselves were a good inch and a half thick, and A likened them to "giant McDonald's hash browns" (a good thing, in her book). So while the latkes were quite satisfying, their size called for a bit more of the other ingredients to even out the dish. 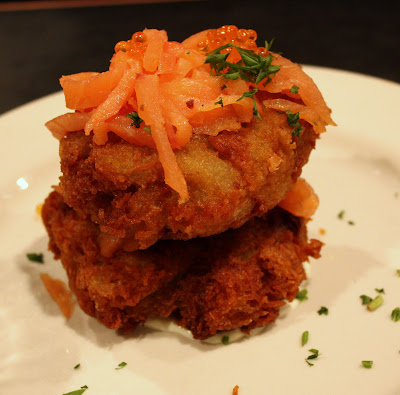 My boyfriend ordered one of our favorites, the breakfast sandwich ($10.95), typically served on an english muffin, but is of course, far better when consumed on a bagel ($1 extra). Two drippy fried eggs, two thick slices of grilled ham, and a slice of fresh tomato are smothered in melted muenster cheese. This sandwich is for hungry people only.. it is a serious beast to conquer. The simple mix of breakfast staples seem to increase exponentially in flavor when paired together. Arguably the best breakfast sandwich I've had. A side of crispy home fries and a few random pieces of fruit finish the plate, but the sandwich itself is most certainly the star of the show. 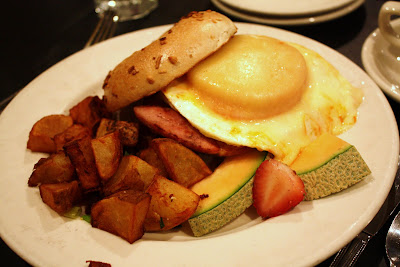 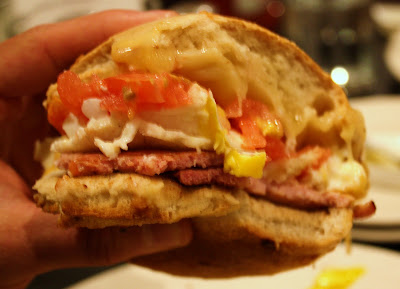 Even though this trip wasn't the absolute best of my meals at Zaftig's, it's such a fun and cute atmosphere- bustling waitstaff zipping around attending to patrons chatting animately with friends and family (lots of kids!). The coffee is capped off with diligence, and any odd requests to alter dishes are appeased without a blink of the eye. My positive feelings about this place can't be dimmed by a dry quiche or missing bagel chips- there's always something new (or an old favorite) on the menu to look forward to on your next visit. If you're shipping up to Boston, make sure to check it out.

Zaftig's Delicatessen
Brookline, MA
Posted by A and J at 7:02 PM