Dim sum is an experience that you know you shouldn't repeat often, yet sometimes you just can't resist. J and I first tried this practically-all-you-can-eat-Chinese-food-delight last year, and loved the lively atmosphere, the sharing of plates among many people brought together for a common, delicious goal, and of course, the food. When a friend suggested we gorge ourselves the day before the annual 10-mile Broad Street Run, I signed right up.

Last year, we went to Ocean Harbor. This time, the organizer of the event insisted that Ocean City (directly adjacent to Sang Kee, not the town in New Jersey) was actually superior- I think it might be one of those "Pat's vs. Geno's" arguments. However, upon arriving I did notice some key differences- Ocean City is much brighter and cleaner than Ocean Harbor, there are constantly new carts of food circulating, the restrooms are well marked (and clean), and the staff is friendly and accommodating. You can deduce what you will from that on my memories of Ocean Harbor. 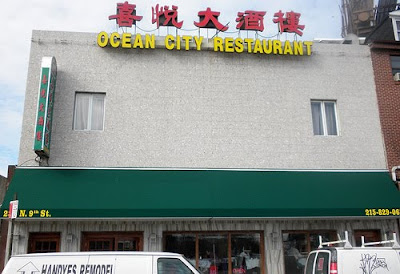 As we waited for the rest of our party to arrive, the waiters brought out pitchers of water (absolutely a requirement at this salt-fest, and a no-no at other dim sum spots) as well as large kettles filled with chrysanthemum tea. The tea was bitter with a definite floral flavor, but with the addition of a few pieces of "rock candy" (crystallized sugar cubes), it was a perfect comforting drink that I kept returning to throughout the meal. We also selected a few items from the trolling food carts that we knew would be great served hot or cold. And so the eating began.. and basically didn't stop for over an hour. Many of the food items were practically identical to those we ate at Ocean Harbor, so indulging was both a gustatory pleasure and a replay of fond food memories.

We started with what may be the sweetest, most dessert-like item: the red-bean filled sesame balls (also known as matuan): rich, sweet, and still my favorite traditional dim sum item. The waitress was kind enough to slice each in half, and I snagged a half to split with my "sharing partner" (usually known as my boyfriend). Dim sum is meant for sharing, and since we had a large group and a huge number of items, it was easier to split one piece of each item with him. 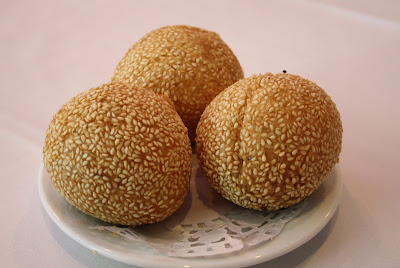 Then came a long stream of dumpling type dishes- basically, several renditions of "take a food item, wrap it in dough, and steam/fry/bake it." I'm pretty sure you can't go wrong with this formula, especially when each bite is smeared through a mix of soy sauce and chili oil. 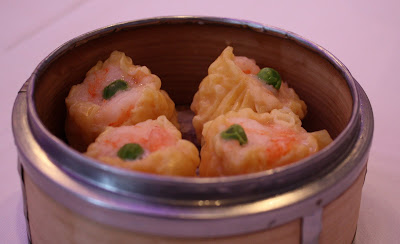 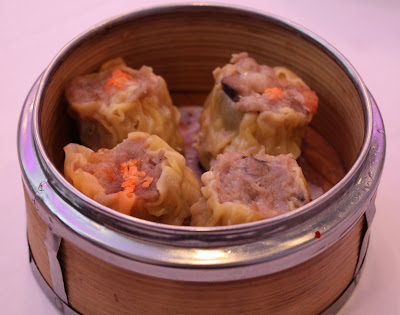 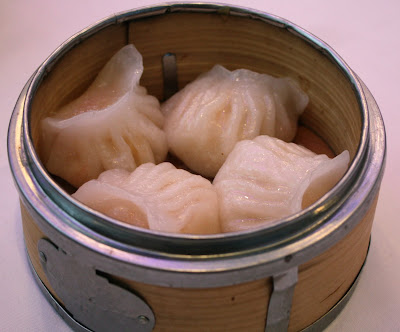 These three were fairly generic, but were still those types of foods that you could eat a million of and still enjoy. They were also super easy to split into two with a fork (yep, those were provided too, with no dirty looks), and still provide a substantial bite.

Two of my favorite dishes from our first dim sum trip were up next: the bao buns and the lotus leaf rice. The barbecue bao bun at Ocean City is thick and doughy, but slightly dry, and the meager portion of barbecued pork did little to provide necessary moisture. I'm not sure if our batch had been sitting around for a while before we dug in, but it didn't live up to its potential. 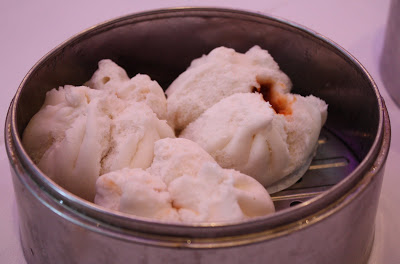 The other variation of the steamed bao bun served was filled with little bits of wilted cabbage, veggies, and pork, and was far superior. The bun itself was thinner, and the bun-to-innards ratio was much more enjoyable. 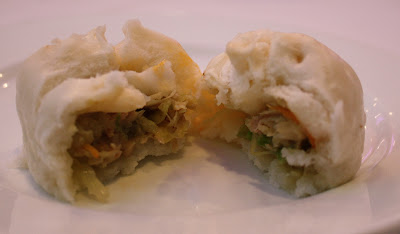 This item was served again later in the meal, with very similar flavors and fillings, but pan-fried instead of steamed. This cooking technique gave each bun a crispy outer edge and helped alleviate the dry, fluffy feeling of the dough. The pan-fried, vegetable version was my favorite of all the baos. 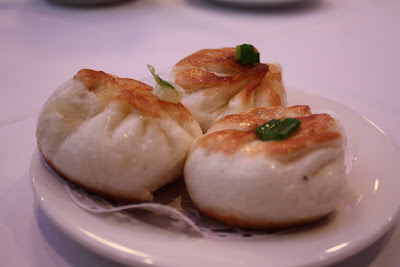 The lotus leaf, however, was overall one of the best savory items of the meal. A pile of rice mixed with vegetables and bits of meat is steamed within a gigantic leaf, and upon unwrapping the leaf, looks like an innocent brick of rice. 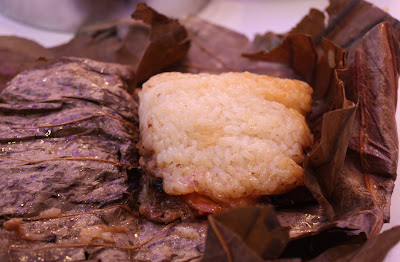 Upon scooping out a few forkfuls chopstick-fuls, the bounty within is revealed. The rice is super sticky and easy to navigate with the chopsticks, and delivers the flavor of the meat and sauce within, as well as the slightly earthly flavor of the leaf itself. It's kind of like a perfectly portioned, portable meal. 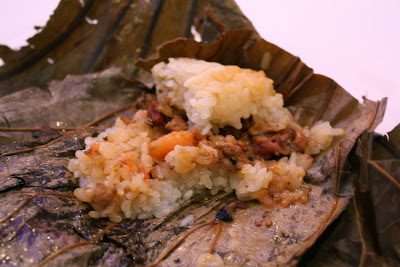 The next few dishes to arrive began to vary from the "food item wrapped in dough" theme. We sampled a couple of protein-heavy, ball shaped items, one made from ground pork/beef and one made from ground shrimp. The beef meatballs looked semi-unappetizing, but tasted familiar- somewhat of a combination of your neighborhood Chinese take-out and your Italian grandmother's famous meatballs. When my boyfriend asked what they were, he mistook my answer for "meatwad" and now I may never think of them the same. It was an adequate accidental nickname. 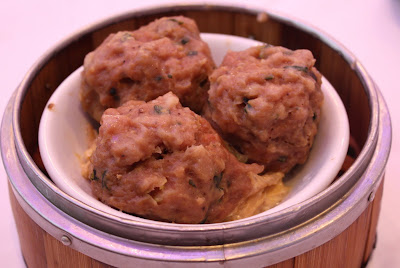 The shrimp balls were different as they were dipped in a thin batter and deep-fried. The extremely generous portion of shrimp gave it a chewy texture and a mild flavor, but I felt a little greasy afterwards. I would have preferred a steamed or pan-fried version. 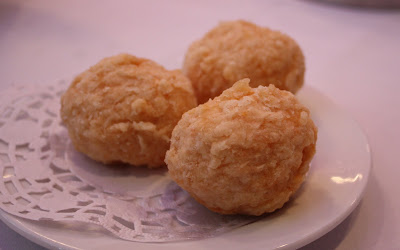 The final few dishes were all unique compared to our last dim sum trip, and I had mixed feelings about them as a whole. The clear winner was pan-fried dumplings filled with perfectly steamed leeks, one of the few glimpses of vegetables I had throughout the meal. The crispy, phyllo-like shell was a nice little cradle for the fresh, flavorful greens. I actually stole an entire extra of these dumplings all for myself (guilty!). 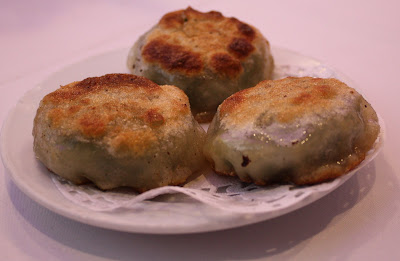 A few members of the party were quite excited to have the next dish arrive at the table, and so my expectations were high. Deemed "Chinese manicotti," squishy, wet noodles were wrapped around different fillings- we sampled both shrimp (two whole shrimp per tube) or pork (a more solid filling of ground meat). Each order was topped with a sweet sauce before being placed on the table. These were probably the most difficult to move, split, and eat, and most of our attempts ended up with the noodle and the filling completely torn apart. Maybe I was too full at this point or my taste buds were shot, but they didn't excite me. 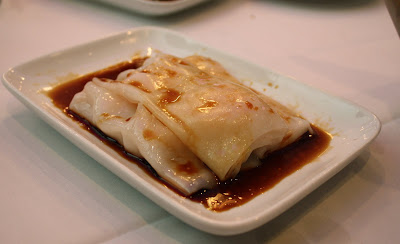 As the meal began to wrap up, and everyone at the table began to slow down, my friend insisted I try one final dish: the turnip cake. Similar to the taro cake we enjoyed at Ocean Harbor, the turnip cake is actually made from shredded daikon radish and rice flour (there aren't any turnips, sadly). After a heavy steam bath, the cake becomes somewhat gelatinous and is able to be sliced into large chunks. Its flavor and texture reminded me of a combination of polenta and mashed potatoes- simple comfort food that I highly enjoyed (especially with that chili oil I was adding to everything). 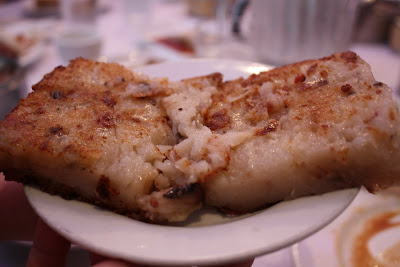 The restaurant still wasn't too crowded at this point, but a trip to the restroom allowed me to survey the other diners-- we were the only non-Asian-American's in the entire restaurant, and we were also in the minority for having ordered dim sum. Many of the diners had ordered large dishes off the regular menu, all of which looked interesting and delicious. The waiters let us leisurely scrape up the remaining bites of food and slowly pay our bill (which came to $12 per person with tax and tip- an absolute steal considering all the dishes we tried!). Just a few words in closing: I would highly, highly recommend attending your first few dim sum trips with an experienced dim-summer, and if you can snag one that speaks Mandarin and/or Cantonese, you'll be even more well-off!