I've visited Kanella several times since starting this blog, but have always had some hesitation about writing it up- almost for fear of breaking some kind of spell. I'm almost out of fingers to count the number of times I've eaten there, and that is saying A LOT. We don't frequent specific restaurants on principle. As you can imagine, Kanella holds a special place in my heart (and stomach) as my favorite place to eat. A & I debated on where to take the 'rents for dinner while they were here, and Kanella won without too much of a fight.

Snagging reservations only one day in advance had us eating at 6 PM. The place was packed the entire time, though notably, the owners parked their two kids at a four-top, taking up some prime real estate. The simple decor, with its striking Mediterranean sea blue color palette, exposed brick, and rustic wooden furniture, is comfortable and inviting; soothing in a familiar way. The service is impeccable, with well-trained staff members quick to play on a good sense of humor. The Cypriot chef, Constantinos Pitsillides, has a stern eye on every dish coming out of the kitchen. He also makes his presence known in the dining room- at one brunch even personally replacing a French press of coffee that he deemed incorrectly prepared. 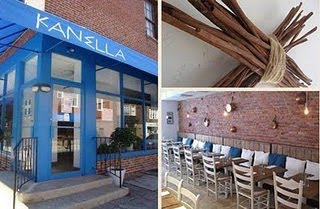 Quite honestly I could describe the experience of eating at Kanella for days, but I'll move onto the food. First up is the bread- dense and chewy with a perfectly powdered crust- this is what my dreams are made of. A thin tahini dip adds another dimension to the already nutty flavor of the bread. 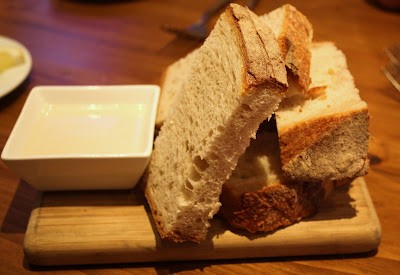 Since we were sharing apps, we went with a standard- the dips of the day ($8). I've had various renditions of this dish, but this time, we were served a trio with bases of eggplant, beets, and lentils. The beet dip was like a finely ground beet, but with an extremely concentrated flavor. The lentil was pretty plain, leaving the eggplant dip as the consensual favorite. Creamy with just the right amount of eggplant chunks (and no eggplant skin), the flavor was rich without being overwhelming. Though served with grilled pita, these could honestly be enjoyed by the spoonful or slathered on the delish bread. 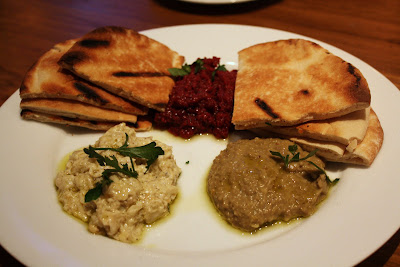 We kept with the carb-heavy theme with the flatbread ($8)- a slightly thicker bowl shaped pita is spread with yogurt and chopped olives and then covered with slices of marinated eggplant and zuchhini as well as somewhat of a surprise ingredient- dried apricots. A sprinkle of goat cheese and fresh herbs tops it off. The whole thing was like a pita pizza- it was actually "glued" to the plate with a dab of yogurt to keep it from sliding around. It was a tad on the small side to share between the four of us, and because of the shape and size somewhat difficult to cut into quarters. The combo of flavors was nothing out of the ordinary, but there was a solid mix of sweet, salty, creamy, and savory. 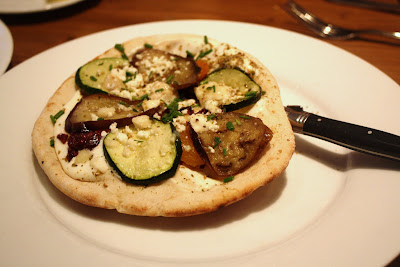 My entree option was a no-brainer- after my Dad sent me some pictures from Greece last summer of stuffed calamari, I knew I needed to try this dish for myself ($24). Two squid bodies are stuffed full of an incredibly flavorful rice mixture- pine nuts, lemon zest, feta cheese and vinegar meld together to make a compact stuffing. The slippery calamari packages this up, adding a chewy wrapper- though it didn't have much flavor of its own, the heavy-handed citrus was a great complement oozing from within. Served on a bed of slow-cooked green peppers that look a bit like pickled jalapenos, fat capers, and huge chunks of garlic- overall, it was a good balance to the carb-heavy start to the meal. 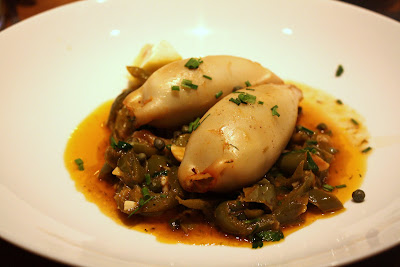 A initially ordered the Hirino ($23), a pork loin kebab served on top of another pita with an assortment of sides. Our mom chose the Moshari ($23), a grilled veal flank steak dish. Upon serving, A noticed some serious food coveting and agreed to switch plates. The Moshari comes with a solid serving of veggies- sauteed green chard with thick-cut mushrooms and fresh beans in a rich mushroom broth. Cooked till just tender, the greens were fresh and vibrant. The meat was beautifully cooked as well- pounded thin and coated in a lemon-herb marinade. Simple yet so satisfying. 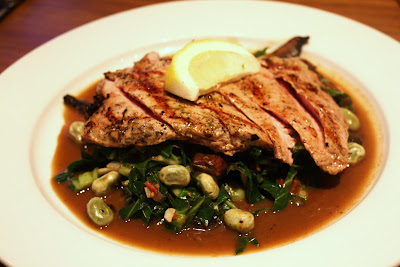 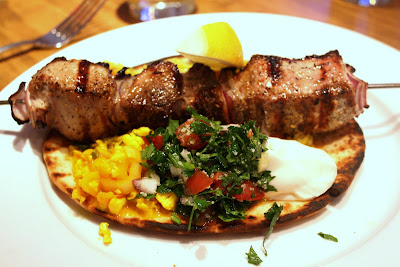 The final entree of the night was the whole fish ($28)- a dorado (aka mahi-mahi) is wrapped in a grape leaf, then spends a brief time on the grill before finishing in the oven. This definitely calls for some serious deconstruction, involving peeling chunks of the flaky white meat off and leaving behind a bare bones fish skeleton. Apparently, fish have really tasty cheeks- the waiter checked to ensure empty jowls as he cleared the plate. The fish was also served with a chard mixture, this time a cold, almost raw rainbow chard salad with peppers and onions. Light and refreshing. 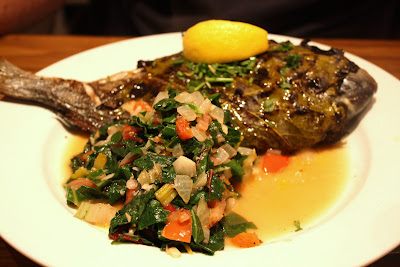 Not wanting to end the meal, we stayed for dessert. We ordered a large French press of decaf Counter Culture ($10), incubated to make a thick, dark and roasty rich coffee. A dab of cream made for a heavenly cup of brew. 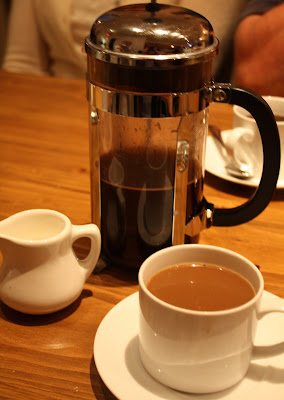 As our waiter was describing some of the desserts, Constantinos came out of the kitchen and simply pointed at one of the choices before moving on to check on another table. Of course, chef knows best, so we immediately ordered the pistachio and olive oil cake ($8). A somewhat crumbled piece was served with a scoop of ouzo ice cream. The texture of the cake is due to the pistachio flour that infuses the treat with a beautiful green color and nutty flavor. Olive oil provides a rich moisture- overall, the cake isn't terribly sweet but the flavor profile and crumbly cakiness make it a great choice. The ouzo ice cream follows in this note, serving as a cold and creamy spoonful with a hint of licorice. 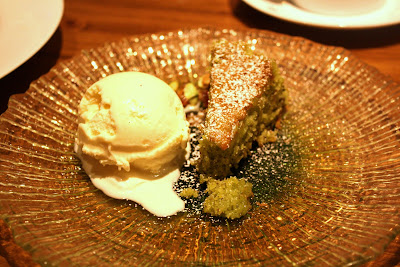 We also made an excellent decision in choosing the sticky date and chocolate cake ($8). This is like some sort of crazy fusion of chocolate cake batter, a cinnamon roll sticky bun, and bread pudding. A caramel glaze is infused throughout, causing each bite to glue your teeth together and smother your tongue in a sweet and spicy dark chocolate mush. I'm not kidding. You must eat this IMMEDIATELY. 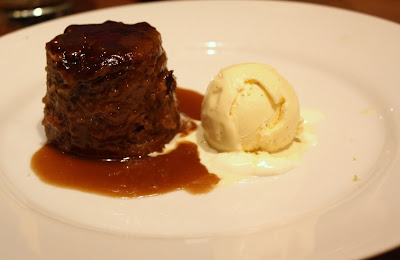 I don't think I can say enough good things about Kanella. Consistently outstanding food, perfect array of menu items, great atmosphere, five star service- our meal was perfectly paced, allowing us a solid two-and-a-half hours of amazing eats. Whenever I am asked for restaurant recommendations, this is at the top of my list, and for good reason.