It's been nearly a year since J ventured to Meritage for their specialty dish- Korean Fried Chicken. It was a much hyped meal that lived up to its publicity, and we were definitely part of a larger group who was disappointed to see it taken off the menu. Apparently, we made such a big stink that chef Anne Coll realized she had to bring it back- but compromised with a two-night-a-week return. Word is that the kitchen at Meritage is too small to produce large quantities of a time- and space-intensive dish such as this.

I can't decide whether I'm proud or embarrassed to say we staked out our spot for the first evening of the KFC's re-unveiling. This time, I was trying it for the first time, and J was experiencing it in a different way- instead of a "meal for two" as it was served last year, it is now a "large plate" meant to serve one. Since we like to eat more than 1/2 a plate, we ordered some appetizers to build a full meal. Once our order was placed, bread service arrived- an adorable, fluffy round bun served with salted (literally) butter. 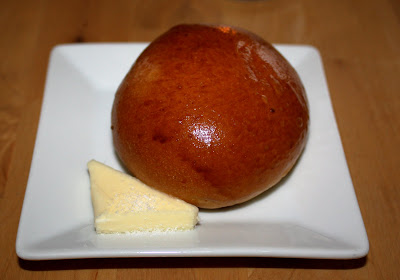 The dining room was pretty empty, and we enjoyed having a little peace and quiet for our (unusual and much appreciated) mid-week dinner out. We got a secret sneak peek of the KFC as the couple next to us ordered it as well-- and even snapped pictures of it with their iPhones. Blogger city?

Our first "snack" was the lentil fritters with mint chutney ($4). We were excited, since our last run-in with lentil fritters was pretty mind-blowing. Coll's rendition is definitely more complex than the donut-like fritters at Philadelphia Chutney Company, and more closely resemble falafel. Lentils and finely chopped vegetables are combined in a batter, then fried in perfect finger-food size, and served with a deliciously cool mint sauce. 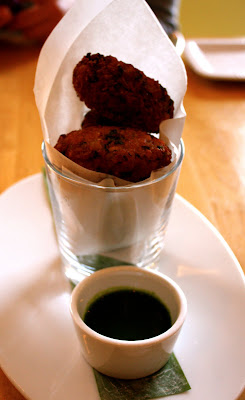 We also ordered an item off of the "small plates" section of the menu- the avocado-crab salad ($13). I was expecting a bit more of a lettuce based salad, but instead we received a deconstructed snack consisting of a well-formed pile of pure crab meat, an avocado mousse, and fried wonton chips for scooping. The micro-greens gave a little crunch to the soft crab, and together the flavors provided light, spring-like bites, with the melt-in-your-mouth wontons adding a touch of Asian flair. 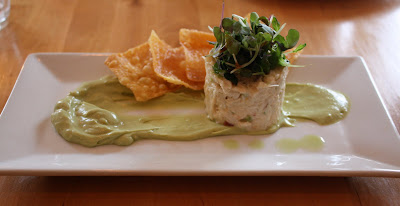 Our final appetizer was a special of the night- which we embraced, since we were there for THE special of the night. Plus, it helped stretch the Korean theme. The Korean Pork Belly Taco ($5) caught my eye as we passed a diner noshing on one at the bar, and once our waitress described it, I was all over that. Unfortunately, compared to other Korean taco-like items we've eaten before, this rendition was a little lacking. The pork belly was thinly sliced and thus became over-cooked and a bit dry, and the tortilla base was also slightly dry. The flavors of the sauce were fantastic though, and I used it to drown out the few mishaps. 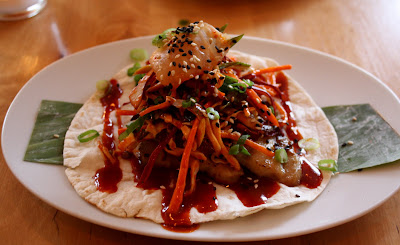 After finishing our random "first course," we didn't have to wait long for our eagerly anticipated plate of KFC ($18). Although the chicken is intended to have an Asian inspiration, it is served with two classic down-home Southern sides- which I still haven't decided is brilliant or odd (it could be both). Nicely cooked, soft, meaty (in both a textural and flavor-profile way) collard greens gave us a good dose of veggies, while the macaroni and cheese transported us back to childhood. Elbow macaroni coated in a subtle cheese sauce was topped with a generous layer of panko bread crumbs and baked into crunchy, salty, smooth comfort. The chicken is served in three easy-to-eat pieces, of which two had bones and one did not. The outer coating wasn't crispy as typical fried chicken is, mostly because of the heavy coating of sauce: that delicious, savory Korean barbecue sauce-- identical to that used in the taco. However, I appreciated this, since it didn't suffer from the crispy-skin-dry-meat problem that lots of fried chicken unfortunately falls victim to. It also may or may not be due to the extensive brining process the meat goes through before frying. The three pieces were well-portioned for our appetizer-heavy meal, but would also be plenty for a solo diner. Although I was happily satisfied, as our waitress cleared our plates and asked about our KFC experience, J commented that it wasn't quite as good as her first time. I'm not sure if Coll changed the recipe or is just a little rusty, but I'd still highly recommend you schedule her KFC into your mid-week eating plan.

Meritage
500 S. 20th Street
KFC served on Wednesdays and Thursdays only
Posted by A and J at 8:07 PM