This past weekend we met up with some family in Newark, DE for a meal postponed from the last time we ate in this cute little college town. Ali Baba Middle Eastern Cuisine came highly recommended from a foodie friend, so we had lofty expectations.

Arriving in the middle of a monsoon, we snagged a metered spot on the street- parking is somewhat spotty in the area. The front entrance to the restaurant is less than inviting- a somewhat tacky bright red and yellow plastic awning covers the front porch. However, the inside is gorgeous with intricate tapestries, inlaid tables, and plenty of comfy lounge-y low tables perfect for a long meal. We started out with mugs of hot mint tea. To me it was more like hot sweet tea with a touch of mint- tons of sugar. Good for my sweet tooth, but I can imagine many disliking the almost overwhelming syrupy flavor. 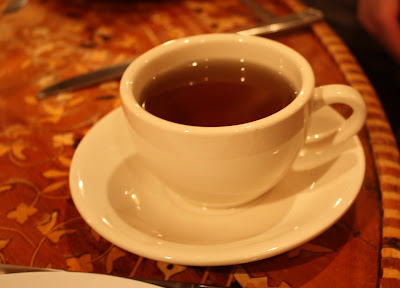 We quickly placed an order for a ton of appetizers- our group was large and we knew we could conquer the task ahead. Of course, hummus ($7) was a requirement, and came served in a large pool covering an oval plate. A drizzle of olive oil and a good dusting of paprika made the dish visually appealing. Super creamy and heavy on the tahini, the overall texture was a bit on the thin side. Light notes of garlic and lemon could have been a bit more bold, but spread on a triangle of pita, it was just right. 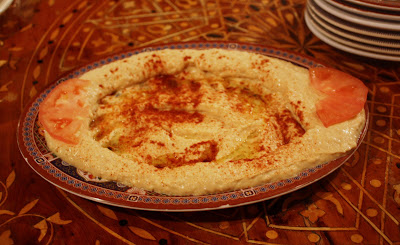 The pita came out in enormous quantities, and was great for scooping up bits of this or that. The almost paper thin quality made it acceptable to eat several square feet worth of bread. Another favorite pita topper was the Fattouch salad ($7). Otherwise known as Lebanese bread salad, the dish is comprised of huge chunks of tomato and cucumber, a bit of onion and parsley, and a really light dressing of oil and lemon juice. Crispy pita chips give the salad its name while creamy crumbly feta gave a punch of saltiness. Altogether the salad was just really bright and fresh and delish. 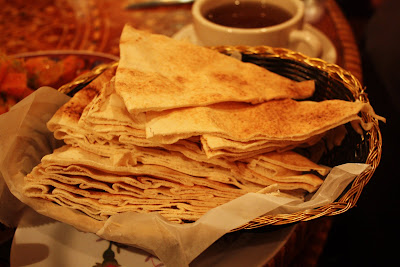 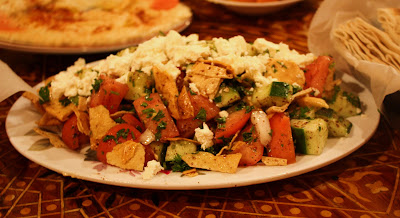 I'd say the fan favorite appetizer was the Moroccan carrot salad ($6). We ordered two plates of these, and they all disappeared. Huge chunks of carrots were pickled in vinegar alongside tons of spices (and LOTS of salt), garlic, onion, and parsley. They had that pickly crunch to them without the snap of raw carrots. The natural sweetness took the edge off the acidic vinegar. Definitely a very unique dish, and addicting! Our grandpa even ate a few which apparently is pretty much the first time in his life he's been seen eating carrots. 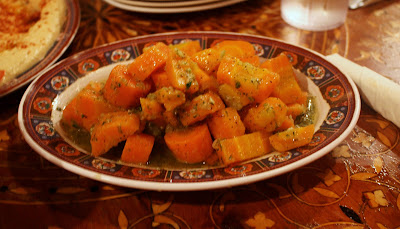 We also threw in a last second order for the Bastilla ($8), a baked pastry type appetizer. A few thin sheets of crispy pastry were layered with scrambled eggs, shredded chicken, and almonds, and the whole thing was topped with a thick dusting of powdered sugar and "grill marks" of cinnamon. Cut into wedges and eaten a bit like a pie, the sweet and savory dish certainly is a great concept. The nuts and chicken trapped between the flaky pastry and topped with a bit of sugar- seems a bit like a Middle Eastern Monte Cristo. However, the whole thing seemed a bit overdone- the pastry was thin and dry, the egg mixture was a bit rubbery, and the flavor from the filling was lost to the sweet and spicy topping. Good in theory, not great in (this version anyway) practice. 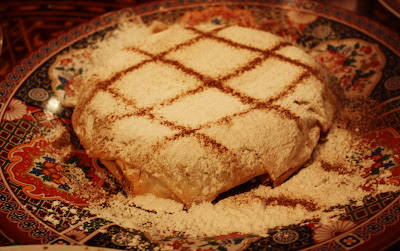 At this point in the meal there was a pretty big lull in terms of the food, but it gave us a nice time to sit and chat and sip fresh cups of tea. Our waiter slowly cleared the table to make room for the main courses. The table surface actually got extremely cluttered between utensils, glasses, cups and saucers, plates to eat off of, and then the serving platters. We definitely did our fair share of shifting dishes around and consolidating food.

At lunchtime there are a variety of of pita pizzas and wraps, but for dinner the options are a bit more limited. We started with three different types of kabob- shish (lamb), chicken, and kafta (ground beef)- ranging from $12 to $14. Each dish comes with your choice of spiced rice or hummus and tabbouli. The lamb and chicken were both amazing- huge chunks of juicy, salty meat with tons of smoky grilled flavor. Both were perfectly cooked and sandwiched between pieces of pepper and onion. A small cup of creamy garlic sauce was another highlight- just the right amount of kick and a great accompaniment to the meat. 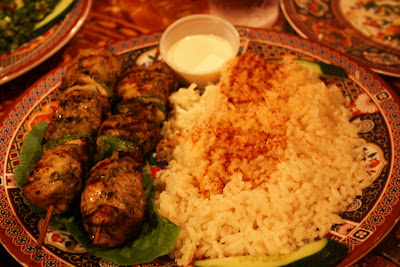 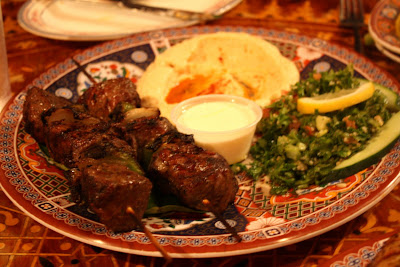 The kafta kabob was... weird. Not that it was bad, it was just like a long meatball on a stick. Or a hamburger-y corndog. Well seasoned and a good chewy texture but... the concept was just strange and it was hard to eat. 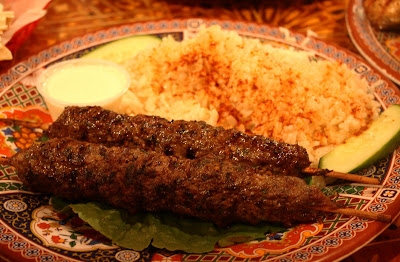 We also order two half-chicken dishes, the Moroccan chicken ($14) and the Dajaj Mashwy ($12). The former was superb- falling off the bone meat without an ounce of dryness, slow-cooked with a spicy harisa cumin sauce, essentially spicy red peppers and mild green peppers cooked down to a flavorful salsa. You could probably pick this thing up and shake the meat off the bones. It was insane. It was odd then that the Dajaj Mashwy was almost the complete opposite. Very plain, sauceless chicken had a strange congealed appearance and relatively dry meat. Thankfully the raving about the Moroccan chicken largely outweighed the disappointment of its tasteless counterpart. 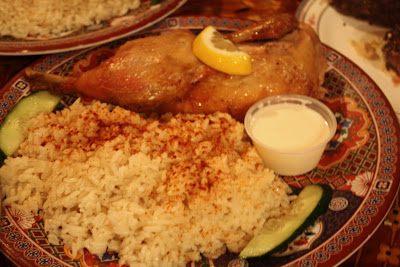 The last dish of the evening was a vegetarian platter ($10). Nothing too exciting- more hummus, baba ghanouj that lacked much of an eggplant flavor (A mistook it for more hummus) and a citrus-y tabouli (ie chopped parsley salad). Additionally, there were two adorably heart shaped falafel and two stuffed grape leaves. While they weren't outstanding or particularly memorable, they played a solid role as Middle Eastern staples. 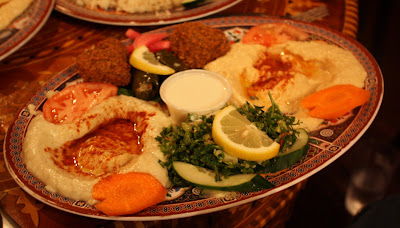 Overall the meal was a real hit- we all got to taste a huge range of dishes on the menu (my favorite type of meal) as well as relax in the laid-back environment and enjoy the company. Sheltered from the thunderstorm outside, the beautifully decorated interior has us feeling tucked away in a little oasis. The whole ethnic experience makes for a fun meal- with great food to boot.