Even though A & I were technically still detoxing when we made our first trip to Blackbird Pizzeria, we justified the carb-heavy meal as a post-long-run refuel as well as the fact that everything on the menu is vegan (but, as I previously mentioned, vegan does not always equate to healthy). 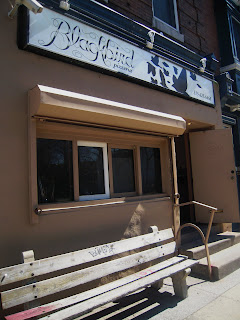 While we waited in a short line to place our order, we picked a few things off of the menu that would give us a good taste of everything. We wanted to try a couple types of pizza because all of the "specialty" options sound amazing. However, when you order by the slice, you have to pick from what is currently available, and the only specialty was a fresh out of the oven "nacho" ($3.75/slice). This pizza is covered with a thin layer of sauce, cheddar Daiya cheese, avocado, jalapeno peppers, and small bits of caramelized onion. Let's start with the crust: super thin and floppy underneath all the toppings but with a thick and chewy outer rim- just the way we like it. Even though the pieces are generously sized, the relatively thin crust make them on the "lighter" side- I'd definitely need several pieces to fill me up. Splitting this with A meant only a few bites of pizza with a great ending (the crust! so good!). A few complaints: the toppings were definitely on the meager side. Also, the cheese actually seemed like nacho cheese- really pasty and artificial tasting. Obviously, this is vegan cheese, and it might seem more "real" when it's not super hot and melty. Overall it was decent considering it was vegan, and the crust was legit, but certainly not the best pizza I've ever had. 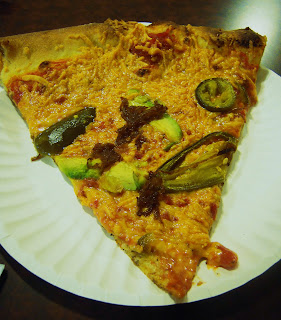 Since the pizza options were limited, we each picked a sandwich as well. A went with the chickpea salad hoagie ($7), a vegan take on a tuna or egg salad sandwich. All of the sandwiches are made on huge vegan hoagie rolls from Baker Street, which we both loved. The perfect density and softness for a sandwich with a chewy and not too crispy crust. However, the quantity was a bit overwhelming- good for a big appetite or for sharing. The chickpea salad was really creamy, with bits of sweet onion and artichoke. A handful of mixed spring greens and a few thin slices of tomato topped it all off. The flavors were very reminiscent of tuna salad- possibly some type of relish and/or mustard in the mix to spice things up. As good as A's choice was, we both agreed that my sandwich was the real winner of the meal- the bbq portobello ($7.50). This sandwich started off with a slightly spicy, crunchy coleslaw, providing both texture and moisture. Huge chunks of portobello were encased in a cornmeal crust and fried, giving them a firm outer shell. The mushroom taste was most certainly lost to the other components, but they added a meaty heartiness to the sandwich. Pickled jalapenos kicked up the spice factor, while a sweet and tangy BBQ sauce mellowed things out. Honestly the BBQ was the most prominent flavor, and I prefer my sauce to be more on the vinegary/smoky side of the spectrum. However, with all the other components, I wanted to eat this sandwich forever. Even though it was huge, I only left a tiny nub of sauce-coated bread uneaten. 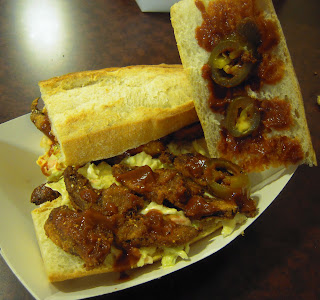 Of course our eyes are almost always bigger than our stomachs, and we wanted to try the antipasti salad ($7). This salad was more than a meal in and of itself, instead of an appetizer as we had hoped. The environmentally friendly paper container is packed with spring greens and covered with separate piles of toppings. Roasted red pepper strips and marinated eggplant were the more standard toppings- the eggplant was super soft, completely losing the typical tough, starchy texture of raw eggplant. It soaked up a lot of oil from the marinade, and had prominent fennel and vinegar flavors. Seitan was shredded to make "pepperoni"- I think this is what they use in their vegan cheesesteaks. A bit peppery and chewy, it was a good replacement for meat- a little like beef jerky. Tofu was sliced thinly and baked, removing some of the moisture and giving it a texture similar to mozzarella. A creamy lemon-peppercorn vinaigrette tied everything together, though we really only added it to the greens- the toppings are good eaten as you would eat true antipasti. We both found it a bit strange that they didn't take advantage of other vegetarian options: olives, pepperoncinis, artichoke hearts, mushrooms, etc., but they provided a creative salad with vegan ingredients they already had on hand for other menu items. 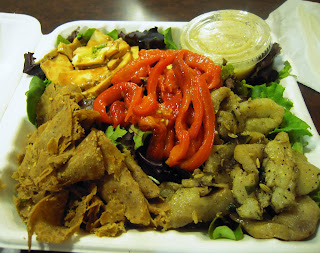 Obviously with all of this food we left completely satisfied (almost to food coma status), and we were really pleased with the meal. Similar to our experience at Horizons, the creativity of the menu items while maintaining 100% vegan standards was impressive. Though we only tried one type of pizza, we preferred the sandwich options- perhaps we just need to try a more typical slice. Blackbird also offers a pretty large array of vegan dessert options, which I think they source from somewhere else. The atmosphere is notable- a fun hangout with art on the walls and a stellar music selection. Cozy without being cramped, with seating available for groups large and small.