I, like many others I can only assume, am inundated every day with a million emails from Groupon, LivingSocial, etc, etc. I usually just delete the offer (I don't want a massage in Conshohocken or art lessons in South Philly), but if it's food related it usually gets a second glance. However, I'm still fairly picky-- I won't buy a Groupon for a restaurant I don't love or one that I haven't said "Ooh! Let's go THERE!". I was pretty sure my dreams came true when I received an offer through LivingSocial for a "Progressive Dinner" food tour, visiting three Jose Garces restaurants; first one for appetizers, second for a main course, and third for dessert and coffee. I'm somewhat wary of "food tours"- they usually don't seem worth the hefty price (in my opinion), but I'm fascinated by the idea of progressive dinners (I kind of want to do them on a regular basis but I don't know many restaurants that are OK with me just popping in for an appetizer) and of course, with Jose himself.

I bought the deal ($35; normally priced at $65) and coerced my fiance and two friends to buy it as well so we could make it a group outing. We decided on a date (the tour is offered most Sundays-Thursdays), and met our tour guide at the designated time in front of Amada. Our tour guide, Jeff, is one of the owners of the company (called Ready To Nosh, possibly my least favorite aspect of the "culinary tasting adventure" business), and an incredibly friendly guy-- very easy to just sit down to dinner with him. There were also two other members of our party, and lucky for us, three no-shows (more food for us!). Amada was empty at 5PM on a Sunday, so we got two choice tables by the window, with food served right as we sat down. The tapas menu at Amada was perfect to start the meal. 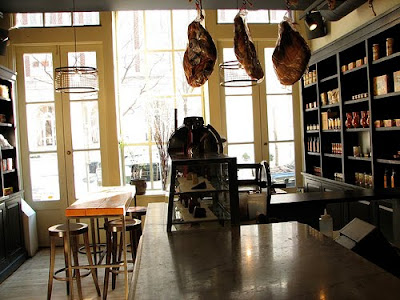 If you had to order a couple dishes to share amongst a group and still get a solid taste of Garces' flavors and style, the cheese, charcuterie, and olive plates would be a perfect choice. First up: the cheese board (regularly $15 for the plate of three with accompaniments). That evening's choices were manchego, cana de cabra (a soft goat's milk cheese), and aragones (a hard cow's milk cheese with a washed rind). Generous portions of each cheese are served with sliced baguette and one "sauce" per cheese-- truffled lavender honey, cherry and fig compote, and white sangria honey + golden raisins, respectively (although mixing and matching isn't frowned upon). 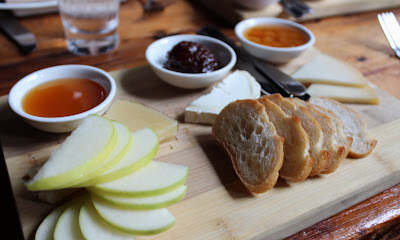 I'm obsessed with hard, salty cheese dipped in honey so I was basically in cheese heaven. The cherry + fig marmalade was also spoonable on its own, although in combination with the creamy, slightly goaty cana de cabra, spread on a thin sliver of sharp green apple, it was worth the entire food tour in and of itself.

We also received the mixed charcuterie plate--overall, it was one plate of cheese/meat/olives per couple. It was a LOT of food, but we loved it. The charcuterie of the night included (I believe) two types of chorizo, lomo embuchado (made from pork tenderloin), serrano ham, and salchichon (pork sausage). Seeing as serrano ham can retail for over $40/lb, I once again felt I was getting my money's worth (the plate regularly goes for $16 at Amada). More baguette, an amazing spicy dijon mustard, and a couple small pickles completed the deal. You could make a few little open faced sandwiches, but for the most part I ended up eating the meat rolled up with a little mustard smeared inside. 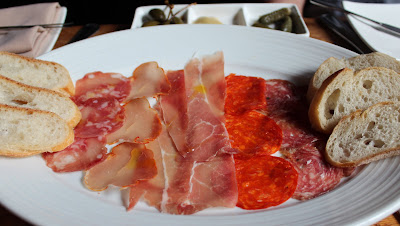 With the fun combinations of bread, apple, cheese, meat, and condiments, these two plates kept us busy-- it was entertaining to mix and match and taste a million different wonderful flavors. However, I didn't abandon our third (and final) plate of the our first stop- the olives. Oh, the olives. I think I ate at least ten, and could have kept going if it wasn't for the high salt content. A mixed batch, I couldn't leave the huge, meaty green olives alone (but of course sampled the entire variety). The plate came with a fun olive fork- much like a fondue fork, it made spearing the olives easy without greasing up your fingers. Too bad you still have to rid yourself of the pits somehow... 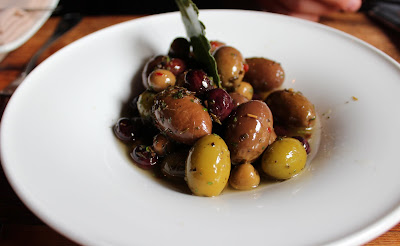 The dinner was arranged so that we would spend 45 minutes at each spot, with a leisurely 15 minutes to walk from one spot to the next. Perfect weather allowed this time between eats to be quite enjoyable, giving us a few minutes to digest, take in the sites, and discuss what was next on our menu. Our second stop was Chifa, Garces' Peruvian-Cantonese fusion restaurant that I have been wanting to eat at pretty much forever. Once again the restaurant was dead on a Sunday evening, but it was still fun to see the amazing decor- Chifa is pretty unassuming from the outside, but as soon as you walk in, you can tell it has a lot of attitude. It's one of those places that has a mix of spaces and tables, all of which I wanted to sit at. 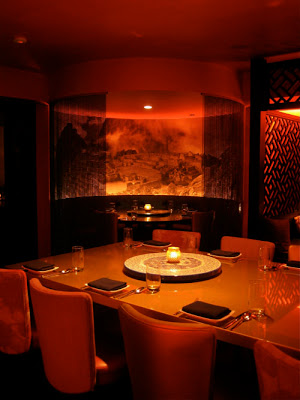 Our "tour guide" had pre-selected two dishes for us to sample here, but first we started with what may be one of my favorite foods in the world- the bread. A classic Brazilian (and apparently Peruvian) bread, called Pao de Queijo (in Portuguese), it's made primarily with cheese and yucca flour, which gives it a super chewy texture. Warm, dense, chewy and ever-so-slightly flaky around the edges, these buns alone are worth the trip to Chifa (as well as worth the entire food tour alone.. sound familiar?). They're served with what is probably a delightful guava sauce, but don't touch it- enjoy the cheesiness all by itself. 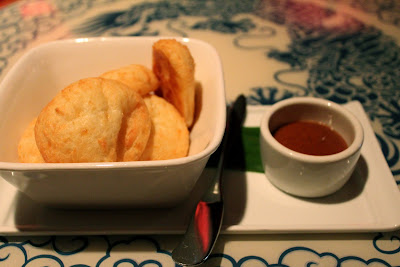 The first dish almost made me forget about the cheese bread- perhaps because they were similar in texture and shape. The somewhat infamous pork belly bao bun (also found at Tyson Bee's, Suzy Wong's, Ocean Harbor, and Ocean City) has found its way into my dreams since this meal. The most perfect steamed buns imaginable- fluffy yet dense, light but not dry, slightly sweet yet without too much flavor to overwhelm the perfectly cooked thick cut pork belly and its intense Korean-barbecue-like sauce. 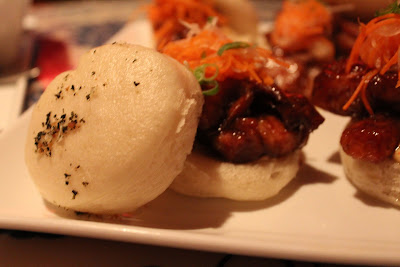 These suckers usually run you $9 (for two?) and they'd be worth every penny. Every part of this little sandwich was a total delight, and I did what I could to snag one of the extra buns, even though I was getting quite full by this point (must have been all those olives). 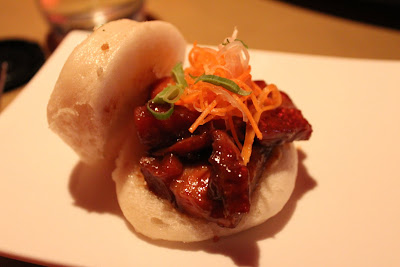 Our final dish at Chifa was slightly more upscale, but by no means more flavorful- the "pulpo" or rock octopus, served as large, lightly fried legs atop a sauteed ginger-onion mix and a spicy ginger sauce, as well as a few token pieces of purple potato- pretty, but random. Ringing in at $17 normally, this dish was great-- octopus is one of my favorite sea animals to eat, and the thick, well cooked pieces were a total indulgence, but I wouldn't order this again if I went sans food tour group. 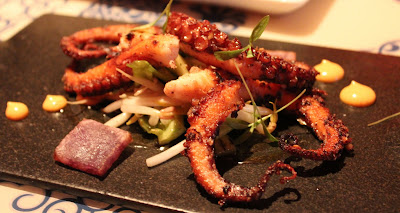 Moving along to our final stop, we took a little detour to walk through Washington Square. The tour is mostly focused on food, but our tour guide pointed out the Eternal Flame at the Tomb of the Unknown Soldier- a landmark I've somehow never seen (or noticed?) even after seven years as a Philadelphian. I'm slightly ashamed. Our tour guide told us that it was one of only two Eternal Flames in the United States, but Wikipedia refutes that. Learn something new everyday. 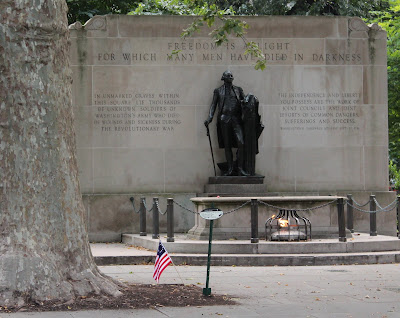 The walk to Garces Trading Company was slightly longer, but we needed it. However, having been to GTC several times in the past, I knew we were in for a real treat. Or five.

We started with the trademark GTC French pressed coffee, and I happily sipped my cup of decaf while we waited for our desserts to emerge from the kitchen. First out was an enormous plate of assorted macarons- the fluffy, soft French cookie with a sticky filling. We sampled a range of flavors from peanut butter & jelly to strawberry to blueberry to salted caramel to lemon-coconut and more. I must confess I tried them all, but most of them by nibbling off a corner before passing it to one of my dining mates. These things are amazing- I don't know how you pack so much flavor into such a little cookie. The coconut-lemon and PB&J were my favorite: the coconut on the outside of the former gave it a fun texture, while the combination of flavors in the latter are always a winner in my book. Usually priced at around $2 a pop, I once again found myself internally thanking myself for purchasing the LivingSocial deal. 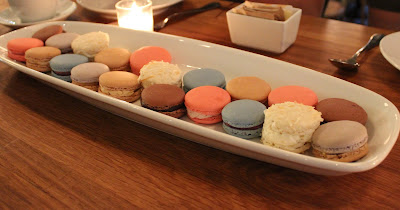 The cookies and coffee weren't even close to the end of the meal. The waitress began delivering large pieces of cake, but was interrupted by our tour guide who insisted we get a choice between the cherry-chocolate and the lemon. The waitress seemed unphased and continued serving, casually asking if we'd just like to have both. Two slices of cake. Each. We were both amazed and horrified- we were already stuffed from the first 2/3rds of the meal, and there was no way these two large pieces of cake were going down the hatch as well. I sampled a few bites from both pieces and managed to take another 1.5 slices home for future consumption.

The Cherry Torte starts with a dense flourless chocolate cake, and is topped with a fluffy cherry mousse and a final layer of meringue, lightly toasted. Extremely rich, the sweet mousse was a nice match for the intense chocolate flavor of the torte. Garces is smart to play on a flavor combination that is practically no-fail, and dress it up a bit with the complex torte and mousse. 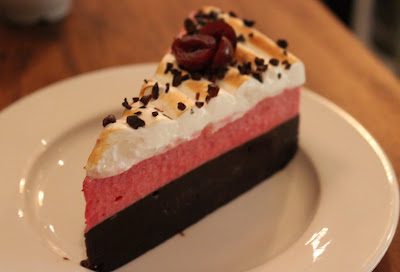 Our tour guide raved about the Lemon Gateau, but I'm not sure I agree that this was the better of the two, though I do have a soft spot for lemon desserts. Another layered cake, this piece included cool lemon cheesecake, nutty hazelnut cake, and a lemon mousse, topped with a sliver of colored white chocolate. The lemon flavor was intense, but somewhat masked by the overall high sugar content. The completely different textures of the alternating cake layers left me wanting to scrape each off and enjoy it on its own- especially the curd-like lemon topping. An excellent end to one of the more memorable meals I've had recently. 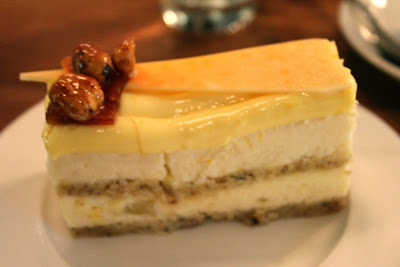 Overall, the experience was perfect- a sampling of foods from THREE amazing restaurants, playing up the talents of each spot and providing a decadent meal that would be impossible to find at a single place. Our tour guide was open and friendly, entertaining us with stories from past food tours and guiding us through each dish (while enjoying it himself as well!). For $35, I honestly feel like I stole from the Ready to Nosh company (especially considering group buying sites take half of the price of each deal purchased). This meal was an incredible deal, but I also think it would be worth it to pay full price. Jeff told us that they're planning another round of LivingSocial at some point, and I will be sure to snatch up a ticket to one of the other tours at that point. Keep an eye out for it, and enjoy the Garces Trifecta for yourself!
Posted by A and J at 8:44 PM