While Garces and Vetri are strongholds in the Philly restaurant scene, there are certainly other chefs that hold their own and successfully manage multiple restaurants around the city. This past February, Mike Stollenwerk added a more casual gastropub to his mini-empire, forming a seafood triumvirate. Though we weren't entirely fond of Fish, the stiff and awkward atmosphere was the primary turn-off. Of course we always want to give chefs a chance to redeem themselves, so while A was tucked away in the Poconos, I planned a weekend adventure to Northern Liberties, complete with a visit to Fathom Seafood House.

The place is small, with about half the indoor seating along a bar that stretches the length of the narrow space. Picnic tables outside allowed us to sit comfortably and enjoy the last bits of daylight while we waited for an indoor table. Note: There was a bit of impending rain, otherwise we would have been just fine eating outside.

After about a 40 minute wait, we were seated at a small table near the door. While the restaurant was bustling with waitstaff and diners alike, the small capacity kept the noise levels to a busy hum. The menu is a compilation of seafood-oriented bar food- lots of fried things and sandwiches, though they do have several "plates" if you're in the mood for a formal entree. However, my dining mate and I were embracing the casual atmosphere and ended up ordering a few snacks to share and some sandwiches. However, I first had to test the most basic element of seafood- oysters. 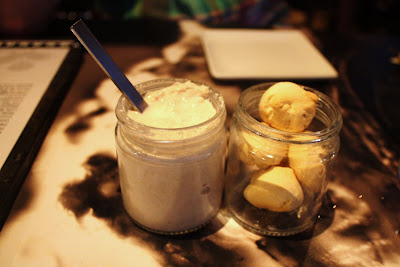 Two East Coast oysters ($2/ea) were served on a rather large bed of ice, complete with lemon, a classic mignonette, and cocktail sauce. A jar of giant oyster crackers and horseradish also adorned the table, available for consumption at any time. I keep my oysters simple, adding just a dash of mignonette. While the oyster was on the small side, it was a little bubble of salty joy on my tongue, slipping down my throat and leaving a trace of the sea behind. Definitely fresh, and well complimented by the splash of vinegar. 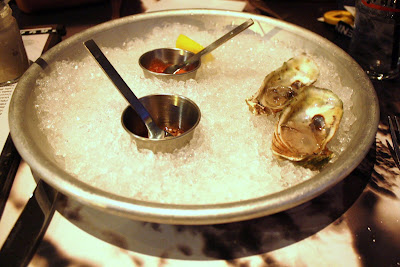 My choice from the snacks menu was the calamari ($10), a seafood standard by which a restaurant can be assessed. I've had my fair share of calamari, and I can honestly say this is the my favorite rendition yet. The squid is thinly sliced, with a few tentacles thrown in for good measure. Incredibly tender, neatly coated with a whisper thin breading, and piping hot after a quick dip in the fryer. You know how young vegetables have a baby softness to them? That's how the calamari felt, except at full size and with full flavor. The squid were mixed with such a unique combination of accoutrements- plump yellow raisins, pickly capers, crunchy toasted pine nuts, kalamata olives, a few tufts of baby arugula and a drizzle of creamy rouille sauce- an olive oil based concoction made with breadcrumbs, garlic, saffron, and chili. Somehow all of these elements seemed to infuse right into that delicate squid meat to make for an absolute orchestra performance in my mouth. If you go to Fathom and get only one thing, make it this calamari. 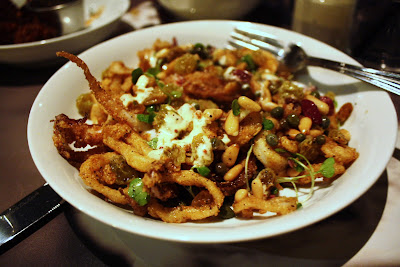 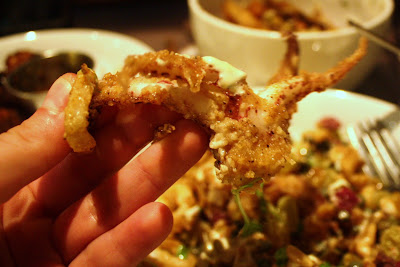 I also suggested ordering the "Fathom Fries," a code name for seafood poutine ($7). In my opinion, thick cut potatoes drenched in gravy and cheese curds are a true treat. Fathom kicks this dish into high gear with the addition of Old Bay seasoning, large cubes of salty, firm cheese curds, lump crab meat, and a rich but not-too-thick gravy made with crab stock to punch up the essence of seafood. The crab meat was less "lumps" and more "bits" which allowed a little bit of meat to stick to each fry. The fries themselves were hand-cut with remnants of skin, giving them a rustic appearance and a bit more substance. By all means, this dish is over the top, but definitely a good one to split for the table. 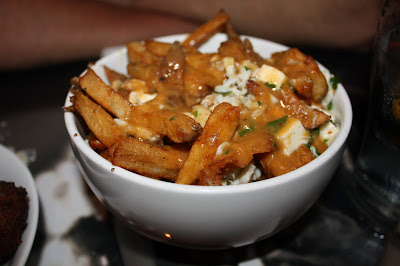 Last up for the appetizers was a newer item on the menu- the crab, corn, and bacon fritters ($8). Seven hush puppy type fried nuggets per order, all a mass fluffy dough encasing whole kernels of corn. The outer layer was quite dark, which I usually turn my nose up at (a sign of old frying oil), but here it added a sharp crispness to counter the soft innards. Bits of crab studded the cross section, with the smoky flavor of bacon firmly infused in every bite, but without being overwhelming. A spicy, drippy whole grain mustard sauce added another element of smoky meat, cut by a bit of vinegar. Another great app to share. 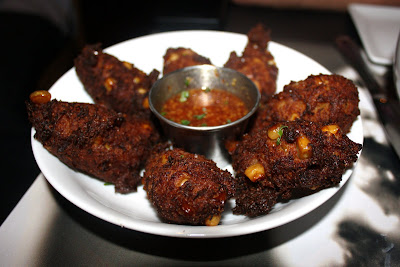 As absurd as it is, I couldn't resist the lobster grilled cheese ($15). Crispy, butter soaked sourdough; stringy, melted slightly sharp fontina cheese; fat pieces of sweet lobster meat; a few tart green tomato chunks; and, just for good measure, a creamy truffle aioli for dipping. Tell me that doesn't sound fantastic... and I'll call you crazy. I'm a big fan of grilled cheese, and a big fan of lobster, and I wasn't shocked that the marriage of the two was so wonderful. I was a little concerned that the lobster would be lost in the midst of the other components, but Fathom is in no way stingy with their application of the sweet meat. The high fat content of the fontina keeps it mild and ensures perfect meltage. Though the sandwich came with fries, I fulfilled my fry quota with those of the crab and cheese curd variety. 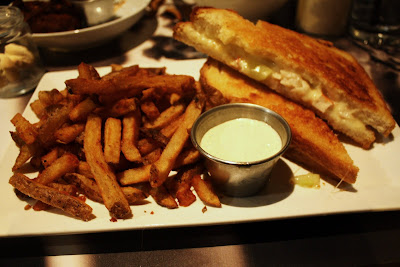 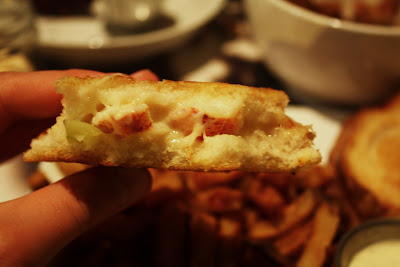 My friend ordered the crab cake sandwich ($13), a thick patty of peekytoe crab served on a brioche bun and topped with roasted tomato and a frizzy tuft of frisee. He barely got through a bite of it after our appetizer affair, but took it home for next-day consumption. He declared it his "least favorite" of the night, but I'm sure its status as leftovers played a role in the ranking. 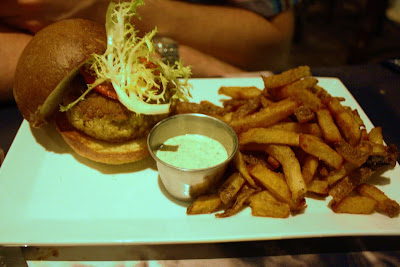 Although Fathom certainly can't be directly compared to Fish, or even Little Fish, this no-frills, comfy, "down home" corner seafood restaurant is right up my alley, especially on a summer weekend evening after an afternoon in the sun. I have to make once concession- the food took an unusually long time to come to the table. As time has passed, this bothers me less and less, but I was definitely annoyed at the time. We were eating after the dinner rush, and the place (and menu for that matter) isn't all that big. Hopefully this isn't a recurring issue, but I can only hope our return visit will involve more prompt service.