This summer has been full of great eats (I mean, welcome to our lives), but particularly so since we've been taking advantage of a friend's nearby urban backyard, complete with grill. We made a classic potato salad for our first barbecue at her house, and collaborated to make our first homemade grilled pizzas on another occasion. We were recently invited back, and planned a grill-only dinner focused on a few select ingredients. Our assigned ingredient was "potatoes," and J dutifully perused the internet and found a unique sweet potato based dish that is cooked solely on the grill.

Known as "Grilled Sweet Potato Salad," I hesitate to actually call it a potato salad. Rid yourself of thoughts of cool red potatoes, or mayonnaise, or even anything savory. This creation, originating from the great Emeril Lagasse (who, incidentally, was perhaps our gateway into the world of combining cooking and media). A sweet and spicy mixture of mango, sweet potato, bell pepper, and a variety of spices lends this dish a laid back, island quality. 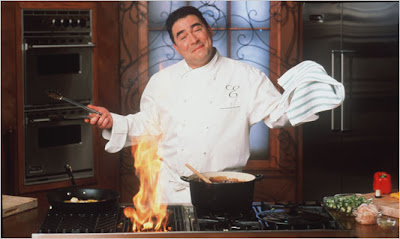 Grilled Sweet Potato 'Salad' (Serves 8 as a side dish) 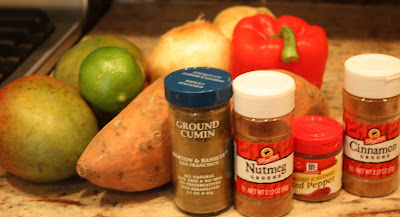 The hardest part of this recipe? Peeling, seeding and dicing the above ingredients. You will eventually end up with a gigantic bowl of fresh fruit and vegetables, hopefully all of which are cut to approximately the same size large-ish chunks. 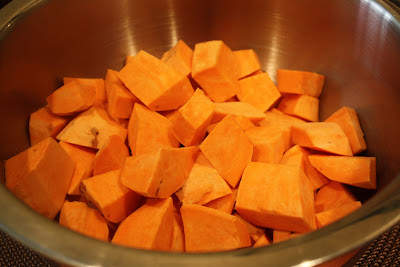 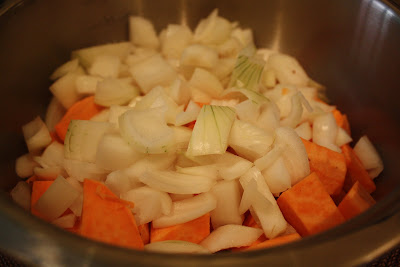 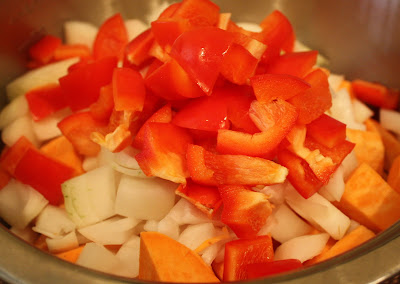 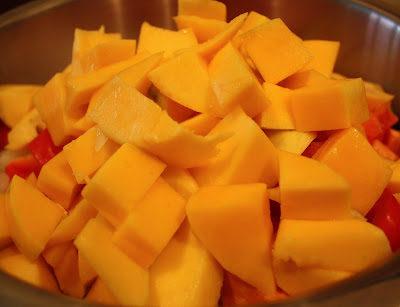 Yes, this salad is full of red, orange, and yellow- something that didn't appeal to my need for green, but is oddly beautiful. The next step is to add the "dressing," a mix of the following.

Once these are combined, pour over salad and mix well. 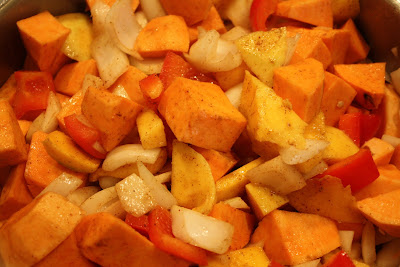 We then carted the 15 pound bowl over to the location of the grill, and prepared the dish for cooking. At this point I realized an important, and slightly sad detail: this doesn't NEED to be grilled. You could prepare it just as easily in an oven, set at 450 degrees. Regardless, we were there for the grill, and forged on. We laid out two squares of aluminum foil and piled half of the mixture onto each. Then, we covered the piles with another piece of foil and wrapped up the edges, like so. 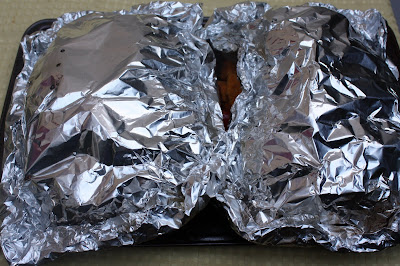 These pouches were then arranged over the pre-heated charcoals, and cooked with the grill closed for 30 minutes. Once the veggies are tender (don't overcook, or the vegetables lining the bottom layer of foil will burn!), remove from heat. You can serve this immediately, if you want a piping hot dish, or allow it to cool to room temperature. 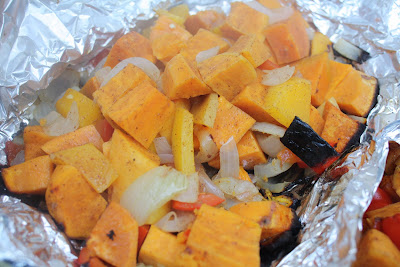 The final ingredients can now be added, as they are essentially garnishes: peanuts and chopped cilantro. Since we're not huge fans of the herb, we went with peanuts only, although I think the cilantro would lend an additional element of crispness and coolness that this dish was lacking. 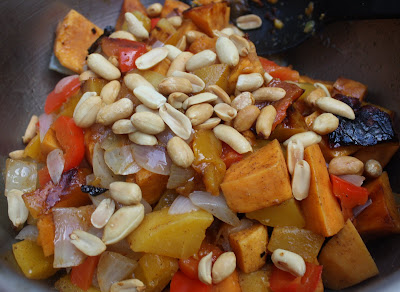 We served the potato mix with amazing Corn and Cheese Cakes made by my other Food Network fave, Giada de Laurentiis. Smoked cheese is mixed with fat breadcrumbs, corn kernels, sour cream and chives, and then grilled just like little meatless burgers of my dreams. The smoked cheese made everything melt together into one solid, yet soft patty and lent the cakes an almost bacon flavor. I will be making these again.. at home.. without a grill. 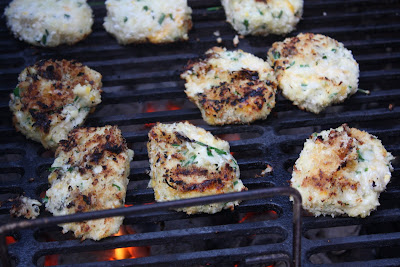 The potato salad was an interesting mix of flavors, with a direct syrupy sweetness coming from the warm mangoes, complemented by the cumin, cayenne, and cinnamon. The size and color of the ingredients left each bite a surprise- one taste-tester was confused after an expected piece of soft sweet potato was in fact a chunk of fruit.

If I had to make one change, it would be to leave out the cinnamon- I was craving something salty, but instead was met with a mouthful of an almost dessert-like flavor. I must say though, eaten cold as leftovers the following day, the flavors were much more pleasant- I think the heat of the ingredients emphasizes certain flavor aspects which are absent once cold. I can't imagine a better side dish for a beach grill-out or a Caribbean themed party- and grilled or not, you should end up with the same sweet outcome! 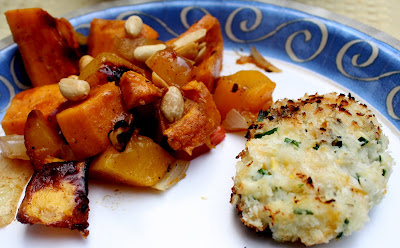