After returning from a glorious week long vacation in the Smoky Mountains of Tennessee, we were looking for somewhere low-key to get dinner. I gave my boyfriend a few options of gastropubs in South Philly that we've been meaning to check out, and he immediately chose Watkins Drinkery "because they have a sweet shield in their logo." They also had rabbit poutine among other interesting-sounding dishes on their MenuPages menu and the prices looked perfectly reasonable. A somewhat long and sweaty hike later, we were enveloped into a cool and dark bar. 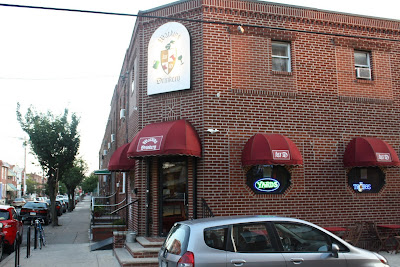 The space is small and dive-y, but the service was spot on right from the beginning. We were the only ones eating food the entire time we were there- most patrons were far more interested in the beer offerings (OK, it is a bar, but still!). The menu takes some creative and interesting liberties on standard pub fare- several vegan/veg options as well as a wide range of atypical and adventurous choices for the carnivores.

We started out with two appetizers- the first being a major hit- the kangaroo nachos ($9.95). An enormous plate of super crispy house cut tortilla chips were smothered with slices of tallegio cheese. This type of cheese is soft with a rind, similar to a brie but not quite as mild- slightly sweet with a bit of a tang. I loved having chunks of rind on my chips- its my favorite part of the cheese! The kangaroo meat was crumbled and resembled a well-seasoned, slightly smoky ground beef sausage. Chopped apple, poblano peppers, and fennel "salsa" constructed a sweet, spicy, and earthy trifecta that didn't sog up the chips like normal salsa can. We literally ate every bite of this- the combination of flavors was just so new to the tongue, it was impossible to deny even the stray chip crumbs at the end. 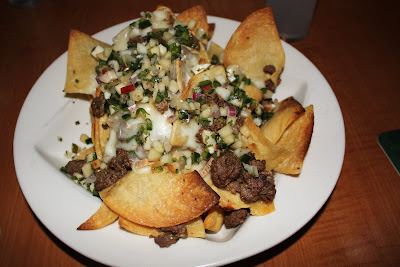 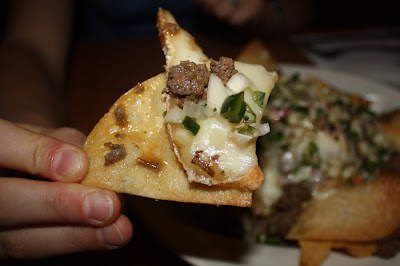 Check out the cheese on that one!

The other app was much less of a hit- the conch fritters ($8.95)- but was more reasonably sized- four half-dollar sized fritters could serve as an app for one. As A & I are Floridians, we've had our fair share of conch, even boiling a live one out of its shell at the beach when we were kids (all in the name of science, right?). The conch in these fritters was practically nonexistent. Though the peppery cornmeal-tinted breading was great, these could have passed as flat hush puppies. A tequila-lime aioli was superb- creamy and sour- I just wish there were bigger chunks of conch to take a swim in it. 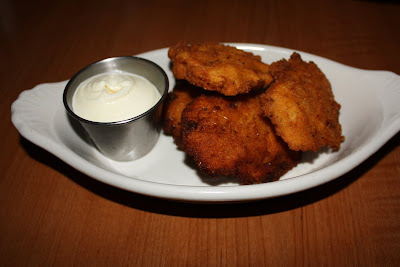 Though there are a few "large plates" entrees, the sandwich offerings were all calling our names- it was tough to choose only three from the list. I made the last minute decision to get the House-Smoked Boar Belly LT (their take on a BLT, $8.95), which was somewhat of a surprise since pork belly is not my favorite. However, the extra twists to the sandwich piqued my curiosity- fried green tomatoes for the T, mustard greens for the L. The strips of pork belly were slightly chewy with a decidedly barbecued flavor- like super thick cut bacon or pancetta dipped in barbecue sauce. 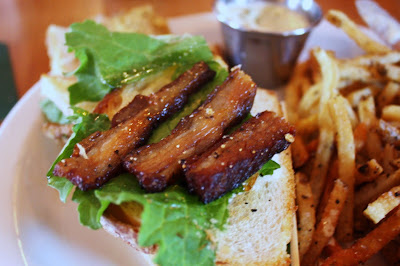 A smear of the sriracha tinted mayo served alongside kicked things up a notch, while the lightly toasted sourdough bread brought it back to its BLT roots. No doubt, this was a terrific sandwich. Thin-cut, super fresh and crispy fries doused with fresh ground pepper came with each of our sandwiches, which probably contributing to the eventual gut-busting feeling we attained by the end of the meal. I can usually stop after just a few, but the salt and pepper combo was irresistible (I sense a trend for WD here). 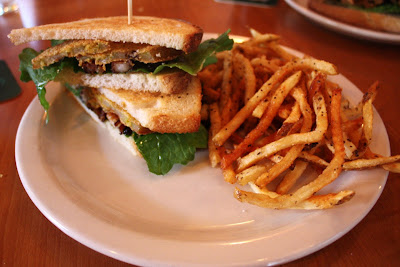 A chose a fancier sandwich- the house smoked salmon ($9.95) served on a dark pumpernickel which was unfortunately dry. The salmon didn't seem traditionally smoked, more of a thinly sliced cooked fish feel and taste. Generous amount of pea shoots added a nice fresh crunch, while a tzatziki counterbalanced a bit of the dryness of the bread. Candied onions were lost to the other dominant flavors of the sandwich. Overall a somewhat strange combination that didn't quite hit the mark. 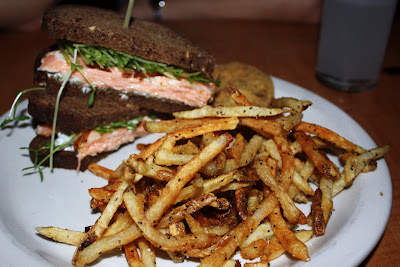 One of the specials of the evening was a fried oyster po' boy. A opted out of ordering it because she knew she'd have to share (c'mon, you know the feeling), leaving it as an easy choice for my boyfriend. Huge, crunchy fried oysters peeked out from inside a toasted ciabatta roll (a bit too toasty in our opinion) and just oozed flavor between layers of buttery Bibb and juicy tomato slices. A bit of the sriracha mayo didn't hurt either, but the oysters provided plenty of savory salty goodness to hold up the sandwich on their own. The peppery breading gave structure and texture to the otherwise slippery oysters without being overwhelming. Another spot-on sandwich. 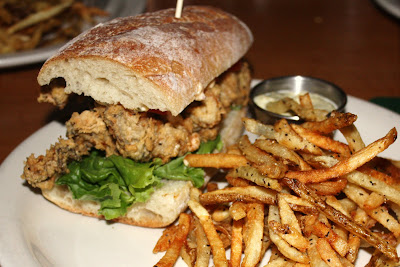 Obviously after all this deliciousness we were at maximum capacity, so I didn't even take a look at the dessert menu. Considering the oddities of the main menu, let's hope they keep the sweets a little more normal. Our meal at Watkins was certainly not without flaws, but with such unique offerings and great South Philly prices, we're sure to return.