As A mentioned in her previous post, we've been trying to eat fish on a more regular basis. One of the most classic uses of fish is, of course, fish and chips- a pub food typically associated with the UK. Battered and deep-fried fish served alongside french fries... delicious, but not exactly the epitome of health. Many of our meals are inspired by what we get in our CSA, and an enormous unused beet from a long-ago stash inspired the idea of beet chips. If you're following my train of thought, you probably get where I'm going with this- a healthy spin on fish and chips. 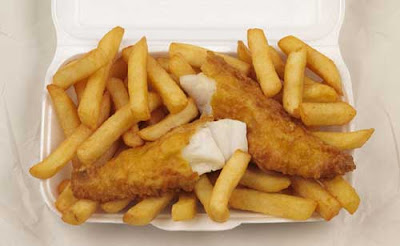 We're pretty much kale chip experts at this point, but we thought it would be fun to expand our horizons and try a range of veggie chips all at once- beets and dumpling squash courtesy of our CSA, kale and parsnips from our neighborhood produce shop. 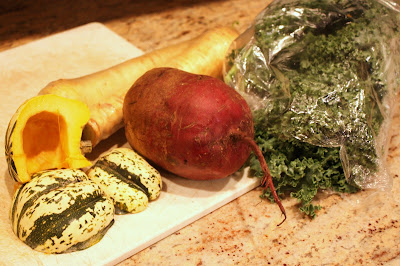 While kale chips simply required a haphazard tearing procedure to form chip sized pieces, the harder roots and squash demanded the use of a special tool- the mandoline. The simple hand-held device contains a protected blade over which peeled vegetables are run to form uniformly thin slices. The parsnip was the easiest to slice- easy to grip with a small surface area. I wanted to make large slices of beet, but its difficult to apply pressure over the entire area as it runs across the blade. Your best bet is to cut down your veggies to mimic a parsnip- long but with a small cross-section. 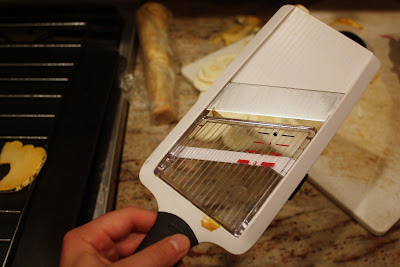 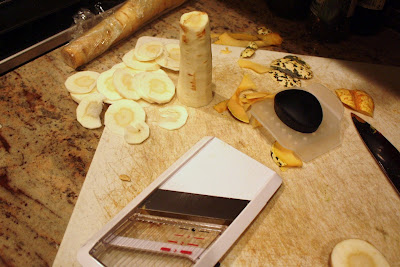 Arrange the slices on a baking sheet, preferably on a raised rack to allow airflow around and under the veggies while they're in the oven. The goal is to remove the water from the chips completely. Adding a mist of cooking spray gives the chips a crispiness instead of a more dehydrated feel. Of course, a good sprinkling of salt is a must as well. Into the oven at 425, and your work is done. 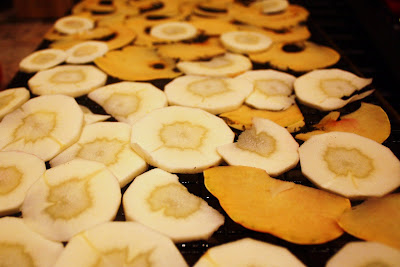 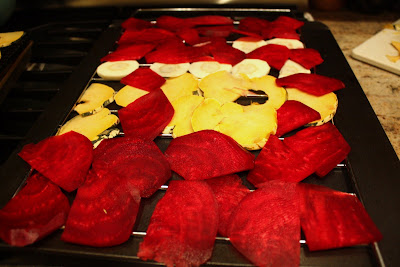 While the chips were crisping up, we went to work on the fish aspect of the meal. As part of the Foodbuzz Tastemaker program, we got another fun free sample to test out in the kitchen- Kikkoman's Kara-Age Soy-Ginger Seasoned Coating Mix. Kara-age is a Japanese style of deep-frying similar to tempura, but involves a lengthy marinade, a potato starch coating, and a swim in the fryer. This Kikkoman product intends to give chicken or fish the flavor and texture of this process, but without the work- or the oil. 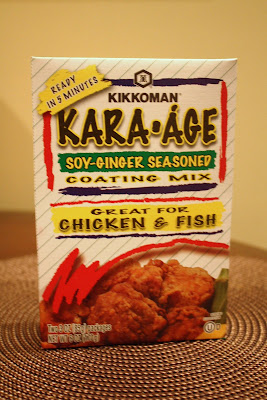 A picked up a thick piece of frozen cod at Trader Joe's, which made some perfect 1 & 1/2 inch cubes. 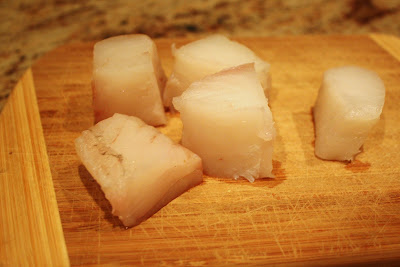 While a couple tablespoons of canola oil heated in a large pan, the fish cubes were dipped in water and dunked in a bag of the seasoning. The box contains two four-serving bags, and one of these packages was perfect to coat a little over a pound of the fish. The potato starch in the seasoning stuck in a even, thin layer which browned up well in the oil. I rolled the fish over after two minutes, and the pieces were cooked through in four. 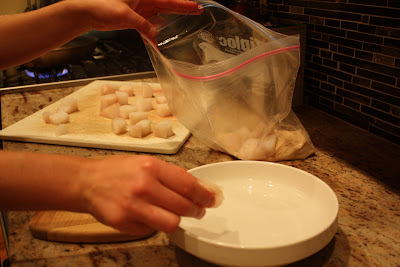 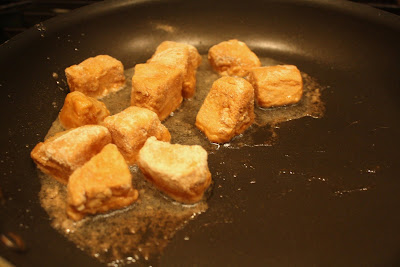 Kale chips cook quickly (cook time is relative to thickness), so we pulled them out after 15 minutes. Because we had three pans of vegetables in the oven all at once, the others took a bit longer- we ran low on patience after another ten minutes. Look for curling, slightly browned edges and a drier appearance to the slices. Since the surface area of the beet chips was pretty large, they probably could have gone for another ten minutes or so, but it seems like beets always take longer than you'd like. 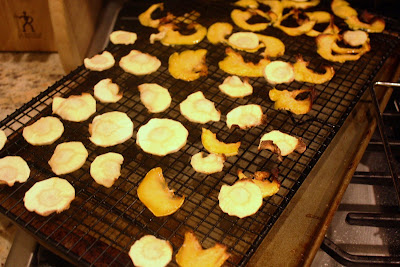 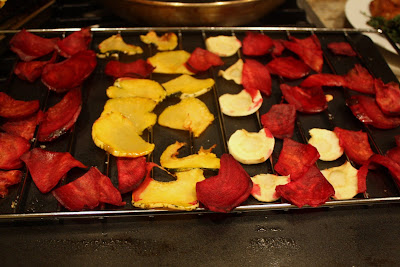 The fish turned out great- crispy on the outside, flaky on the inside, with a hint of ginger- nothing over-powering, quite subtle. No doubt, cod is a fantastic choice for fried fish. 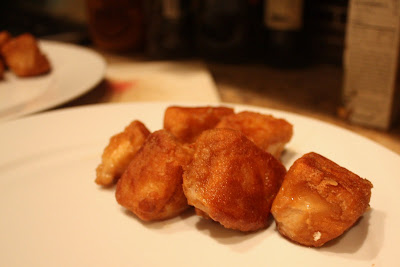 Although the chips weren't perfectly crispy, the thin salty slices were fun to eat, and a great way to use up (and consume!) some vegetables. Choose things that have a lower water content- which is why roots and squashes work well. Our meal came together well- definitely a fun twist on the usual fish and chips! 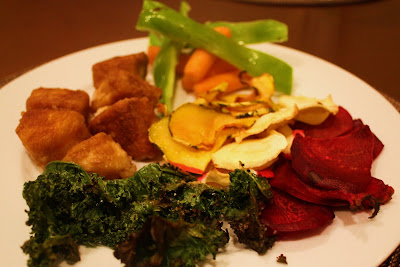