A year ago this past weekend, A & I set off for a fun exploration of uncharted territory- Passyunk Avenue in South Philly.  It was such a fun afternoon, and we've returned to South Philly more than once for a variety of delicious, casual food.  While the occasional fancy meal is a treat,  Philly has a ton of more laid-back restaurants with great reputations- and they're a bit easier on the wallet.  To commemorate the anniversary of our personal "discovery" of South Philly, we headed to South Philadelphia Taproom.  The kitchen is run by Scott Schroeder, whose history mixes experience in both gastropubs and fine dining restaurants- the result of which is a somewhat whimsical menu.  A couple years ago Adam Erace described the food as "down-to-earth, with a fine dining emphasis on doing things from scratch."  He knows what's up.


With almost everything on the menu demanding to be ordered, plus a number of drool-inducing specials, we managed to pick out an eclectic variety of food to share (as always).  First up was the vegetable special of the day- elote ($4).  A popular Mexican street food whose name translates simply to "corn on the cob"- yet this was no standard summer treat.  Sweet yellow corn was grilled till the kernels soaked up some smoky flavor, wrinkled up a bit and loosened at their roots.  The corn was then skewered on a handy wooden stick, slathered with mayonnaise, dusted with parmesan, and finished with a sprinkling of cayenne and chili powder.  Knowing my distaste for mayo, A took one bite and said "I don't think you're going to like this..."  Fortunately, it's really just the slimy texture of mayo that gets to me, and between the grated Parm and a huge mouthful of sweet corn kernels, my mouth was too happy to register any slickness.  My favorite part was how far down to the core I could bite, thanks to the cooking process. 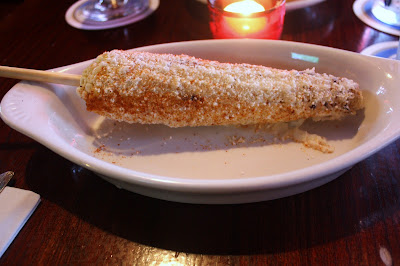 We also got a side order of pickles ($3) which were fun to snack on throughout the meal.  A mix of vegetables included the standard cukes and pepperoncini's as well as carrots, cauliflower, mushrooms, and even celery!  I didn't love the "real" pickles that much- a little soggy and bland- but those pickled button mushrooms might be my new favorite thing. 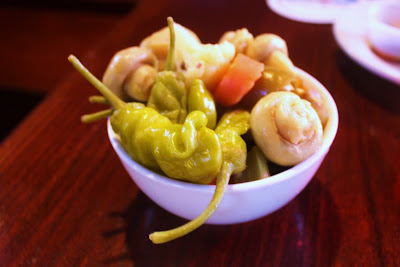 Another daily special was something called "Mexican Construction Worker-Style Headcheese Tacos" ($1/each), which we clearly could not ignore.  We've never had headcheese before- a gelatinous block of meat bits held together by gelatin boiled out of the skull and other "leftover" animal parts- typically pig.  On its own it was a lot like a fatty, solidified Thanksgiving gravy (pretty weird) but became a fun snack when served on a crunchy mini corn tortilla and topped with raw onion, a slice of jalapeno, a sprig of cilantro, and a few drops of lime juice.  After all of THAT, the texture and flavor of the headcheese played more of a supporting role and we were glad to have tried something new. 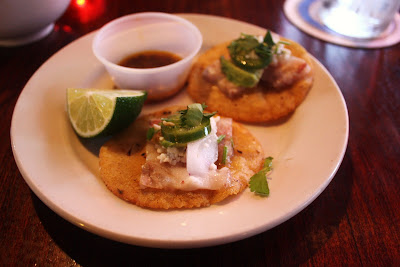 The grilled haloumi salad ($10) was my favorite part of the meal.  Large chunks of juicy galia melon (a green-fleshed honeydew-canteloupe hybrid) and cubed cucumber made up the soft and crunchy bulk of the salad.  Lots of chopped fresh mint and a creamy jalapeno-tinted yogurt dressing gave a great contrasting flavor profile to match the contrasting melon/cuke textures.  Overall just very cool and refreshing, perfect for these last days of summer.  A large slab of salty, squeaky haloumi picked up some gorgeous grill marks and lots of grill flavor and paired well with the sweet melon. 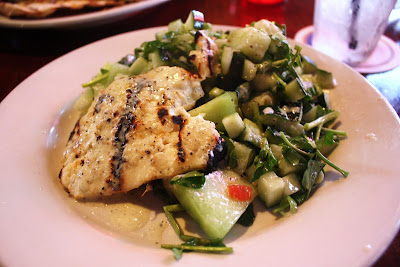 We also ordered the vegan pizza ($9) from the appetizer portion of the menu.  Instead of going the Blackbird route, SPTR keeps it simple with a cheese-and-meat-less flatbread.  A thin pita-type bread is grilled till crispy, then topped with a roasted eggplant "sauce," spicy marinated cherry tomatoes, baby arugula, and a blended kalamata olive pesto.  I liked the ideas of incorporating vegetables with a puree- the eggplant was creamy and I thought I tasted a bit of avocado in the mix, while the olive puree gave a superb salty, savoriness to each crunchy bite.  While this is in no way "pizza", it was still really filling- we took home half. 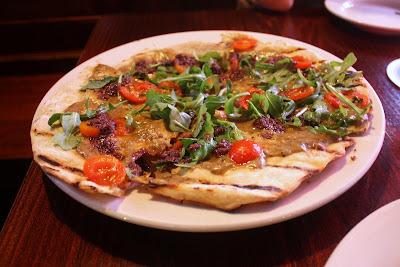 Remember how I said the salad was my favorite? I lied.  After digesting for a bit and watching the beginning of the Florida-Kentucky game (+5 points for putting the game on after our request), we ordered dessert- an epic "Fried PB&J" ($6).  I can't remember where I read about this concept, but I recently became obsessed with the idea of a fried peanut butter and jelly sandwich, and I was pleasantly surprised to finally see it on a menu.  I love regular pb&j, so a fried version clearly had to be an extra delicious treat- and I was not disappointed.  This version was pan-fried with a brown sugar covered crust, making for a crunchy crispy exterior.  Slightly warmed sweet strawberry jam and creamy peanut butter oozed out of the center, but the thickly sliced bread was well-structured making it less messy than you might think.  Not really that dessert-y, but you can add a scoop of vanilla ice cream for $1.  Maybe next time? 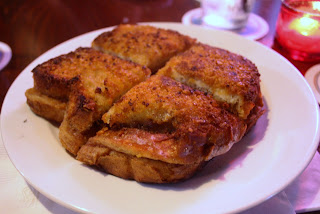 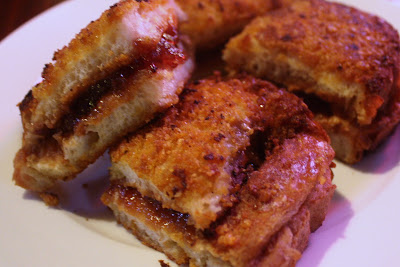 Although it is a far hike coming from Center City, SPTR offered some good eats representative of the great gastropub scene going on in Philly.  We're so glad we've continued to visit South Philly!

South Philadelphia Taproom
1509 Mifflin Street
Posted by A and J at 10:56 AM