As a member of a research lab, I'm used to people constantly joining and departing as they move through their careers. In a few short months, I will be the most "senior" member of my lab, which is quite terrifying. With the impending departure of a few co-workers, someone suggested we all get together for dinner- a good way to spend some time together in a non-science environment. Brainstorming places with a large capacity and affordable (we're all broke researchers) led us to the Chinese Sichuan restaurant Han Dynasty, a favorite of several of the members of our group. A & I enjoyed a collaborative dinner there last year, but as Han himself pointed out "that wasn't [his] food."

While they do their famous 20-course tasting menu once a month, the great thing about dining at HD with a crowd is the option for a personalized tasting menu no matter the date. After confirming that, of the fourteen diners, no one had any food restrictions, we were offered the choice of a $15 ("mostly chicken and vegetable dishes"), $20 ("other meat/seafood"), or $25 ("way more food than you can eat, you'll take a lot home") menu. We opted for the mid-range option, specified medium levels of spiciness, and elected to get all different entrees instead of duplicates.

The appetizers came out fast and all at once. It was challenging to snap pics before everyone dug in, especially with the banquet table format. Up first were two bowls of noodles, one a plain bowl of cold sesame noodles and the other the infamous Dan Dan noodles. The sesame noodles were pretty bland- no spice to speak of- which allowed the soft texture of the ramen-like noodles to play a more prominent role. It was surprisingly easy to grasp pillow-y mouthfuls, even with slippery plastic chopsticks. The Dan Dan noodles had a darker sauce, thanks to a more complex sauce- this rendition includes sesame paste, soy sauce, chili peppers, and a little sugar.  Han even took the time to tell us the origin of the name- it references the pole on which street vendors carry their noodle-wares.  Regardless of the nice story, the subtle sweetness, soft texture, and latent heat made these a hit.


We also had two other noodle apps- dumplings and wontons both in chili oil.  With the bath of chili oil, the spice level is definitely present, but not over-powering.  The dumplings were a lot softer, with crumbled pork and broth inside, while the wontons had quite a bite- two thick layers of noodles pressed together with a drizzle of oil and a generous sprinkle of sesame seeds.  Loved the texture on these.

Scallion pancakes are another classic Chinese appetizer- this rendition is extremely flaky, almost like the buttery outer layers of a croissant. 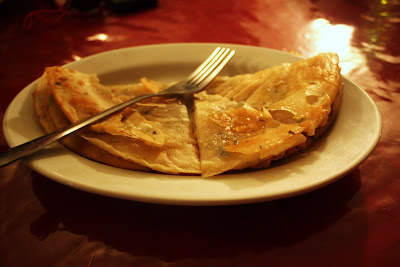 A very popular item at HD are the spicy crispy cucumbers, a cold appetizer of crunchy chunks of cuke swimming in a thin sauce reminiscent of a potent kimchi- salty, gingery with a subtle sourness and a good kick, the kind that sort of catches you in the back of your throat after you think you're safe. 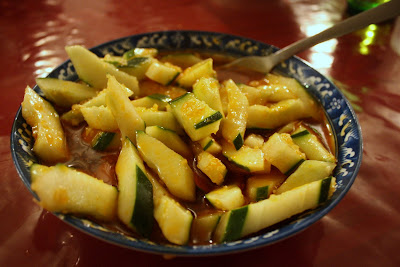 My favorite appetizer was the Fried Taiwanese sausage- two links sliced thinly to enable sharing. Pork meat and fat, a little Sichuan pepper, and a lot of sugar combine to make a terrific sweet and spicy sausage. It's a little greasy on the inside, so the best pieces are the ones on the end, complete with a covering of incredibly crispy skin. I was definitely surprised by the sweetness of the meat- the feature that classifies it as Taiwanese- but amidst all the spice and salt of the other dishes, it was a real palate pleaser.   The sausage is served with raw garlic... I'm not sure why. No one ate any. 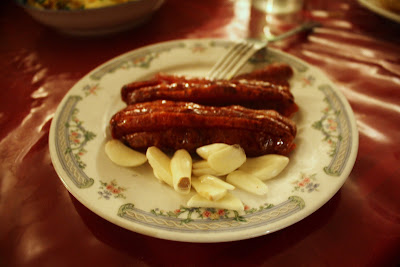 We didn't have much of a break after this round of dishes- the sheer number of them and the logistics of passing them around the table lengthened the appetizer course considerably. Of note, we did have two servings of each appetizer for the table- I think we got all the standard, popular dishes- no tripe, beef tendons, or rabbit, which could have been fun. The first main dish I snapped a pic of was the one "super spicy" dish that Han provided for us. Chicken cooked "Dry Pepper Style"- chunks of meat with a crispy outside thanks to three "flash" dips in the fryer. There were also some green onions, whole garlic, and two types of peppers- dried red chilis and big chunks of green long hots. At the very end of the meal I was brave enough to chew a few pieces of the dried chilis- paper-y and a bit hard to eat, but with a manageable burn. Three in a row and I was definitely feeling it, but mixed into a dish I think they had a great flavor. The long hots were apparently much hotter, so together I'm imagining this dish could really get you sweatin'. 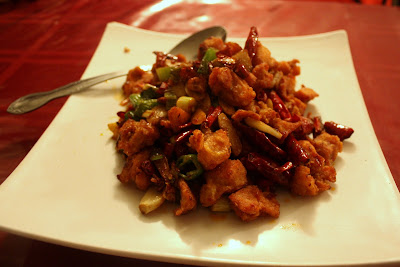 As promised, our meal included a few seafood dishes. At HD, various cooking styles are used to create dishes with your choice of protein. Unfortunately, both of our seafood dishes were fried. The first was a simple pile of fried chunks of a white fish, with a few leeks and a very light sauce (if any). Reviewing the cooking options on the menu, I'm not entirely sure which one this was. The batter on the fish was thick and greasy, causing the fish to have a mushy texture and a flavor overwhelmed by the oily outside. Not my favorite. 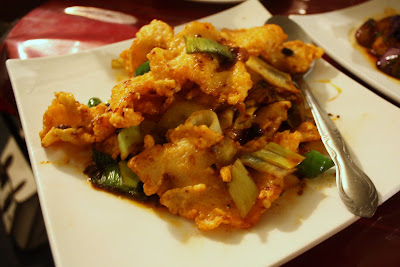 We also had two plates of Salt & Pepper Shrimp- battered and fried on a bed of lettuce and sauteed peppers. The batter on the shrimp was a lot less greasy, but the crustacean meat was overcooked and on the rubbery side. After tasting these two dishes, I would definitely not recommend ordering any fried seafood. 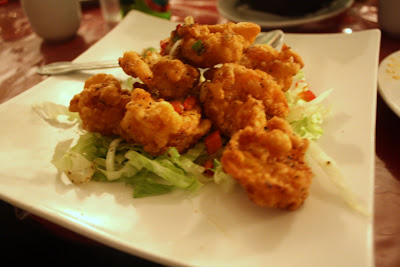 A lot of the dishes started to look the same to me- strips of stir fried meat with various vegetables and sauces. The common theme of salt, spice, and oil had me questioning whether I had tried a dish or not- which also says a lot about the number of plates we were served. I did enjoy the pork "Long Hot Pepper Style"; this time the peppers are de-seeded and shredded, providing a mild heat and the illusion of eating thin slices of green peppers. Unpictured were similarly styled dishes: a cumin crusted lamb dish stir fried with bell peppers and onions- unfortunately, the cumin crust seemed gritty and overwhelmed the flavor of the meat; we also had a double-cooked style beef with leeks, peppers and chili oil that seemed similar to the long hots and pork. 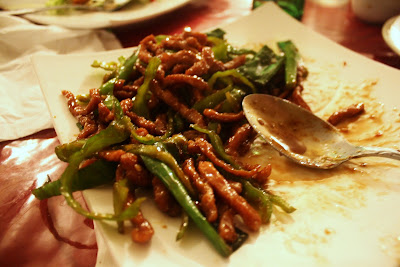 The last entree, and a rather popular one, was the three cup chicken. The name refers to the equal ratio of sesame oil, rice wine, and soy sauce- a winning combination in my book- in which the chicken is cooked. Ginger and garlic play supporting roles. The meat itself is marinated in baking soda, and then sauteed and simmered in the three-cup sauce. This combination ensures that the meat is extremely tender- the meat really seemed to lose all degrees of chewiness and felt a little like mini marshmallows. Texturally this might be a turn-off to some, but I found it to be unique and enjoyable. Sesame oil adds a depth of nutty richness to the chicken, and there's a hint of sweetness in the reduced glaze of the sauce. 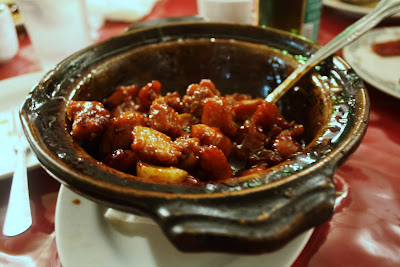 Although there were a few dishes I wouldn't order again, the overall experience at Han Dynasty was great- loved the traditional apps, the space was great for our huge group, and the personalized service from Han himself seemed special. If you have a hankering for some really flavorful authentic Chinese food, consider heading down to Old City.  It helps if you have a big group- you get to try tons of stuff for cheap!