One of the many, many things I love about my fiance is his family- not as big and sprawling as ours seems to be, and with the added bonus of being local, they've made it almost effortless for me to get to know and love them. Long before our engagement, I felt like part of the family, but since we've made it "official," I feel even more connected. Recently, we made plans to have dinner with one of his second cousins- in my family, I have no idea who my second cousins are, but in his, they practically grew up together.  As one of the few family members I've never met, and a frequent blog reader, meeting over dinner seemed necessary.  We decided on dinner at Meme, as I'm still excited about any restaurant that is part of the Savored system. 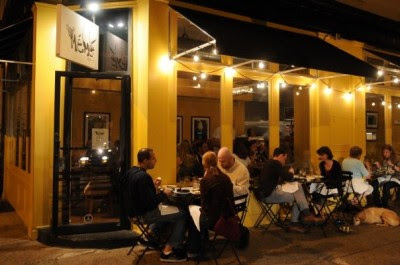 Even though Meme is only a few blocks from us, I've never been in- the menu is pretty tiny and never really piqued my interest. However, its convenience, blogability (yeah, it's a word), and 30% off status made it easy for me to recommend the spot- plus, the chef, David Katz, has a great reputation.  We met for a midweek meal, which I always consider such a treat.  The outdoor sidewalk seating was full, but the small yet spacious interior left us picking our table of choice.  The simple, succinct menu made it easier to make a few choices for starters, and allowed us to sample half of the entree choices. 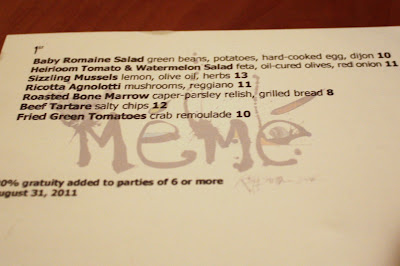 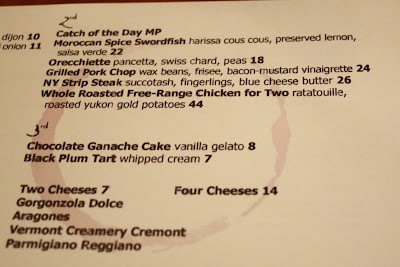 The pace of the meal was slow, giving us plenty of time to catch up, as well as enough time to really enjoy each dish.  Bread service arrived right after ordering- boring, but adequate. 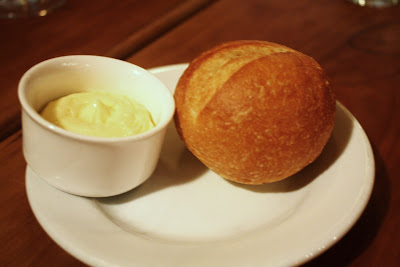 I'm always interested in a restaurant's "signature dish," and I've heard time and time again about Meme's Sizzling Mussels ($13).  The most interesting part of this dish is its presentation- the mussels are removed from their shells and cooked in a screaming hot cast iron pan.  As the dish is brought to the table, you can hear it coming- each little mussel literally sizzling and steaming as it arrives.  The pan looks rather small, but if each mussel was tucked into its shell, it would be an impressive pile of shellfish.  Each one made a great little bite- just a hint of lemon and herbs, not drowned in sauce as you usually find them. 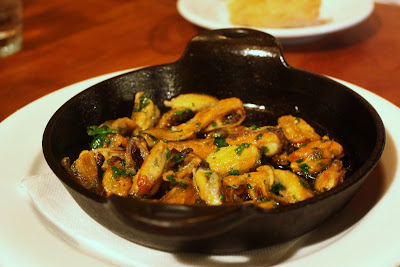 Since I chose the mussels, my fiance passed the torch of choosing the second appetizer to his cousin, who picked the Heirloom Tomato and Watermelon Salad ($11).  As I was just saying how much I love watermelon and feta, I was immediately on board.  The salad was small but easily shareable- small stacks of heirloom tomato slices and watermelon chunks, topped with slivers of red onion, salty oil-cured olives, and crumbled feta, all served over a simple base of high-quality olive oil.  The combination of salty and sweet was just right here, with the olives adding a surprising extra dimension of flavor.  Together, the mussels, watermelon, and bread made a perfect starter triumvirate. 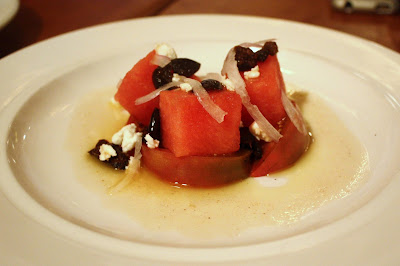 J and I are trying to make a conscious effort to eat at least one serving of fish a week, and since I had no plans for creating a fish-based meal at home, I chose the Moroccan Spice Swordfish ($22) as my entree.  Served over a bed of Israeli couscous spiced with a bit of harissa pepper, the swordfish was sliced thin and grilled until soft and juicy.  Swordfish steaks can be notoriously tough, but the thinness of the filet made it fork tender.  A small dollop of lemon preserves went almost unnoticed, but the thin salsa verde added a touch of herby oil.  The grill left a thin layer of crispness on parts of the fish, aided by a coat of salt- almost overwhelming, but since I'm a salt fiend, I loved it. 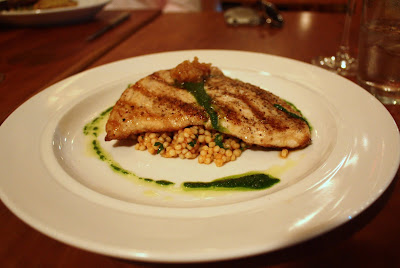 I usually make it a rule to only photograph/write about dishes that I have a fair share of, but the other entree choices at my table were impossible to ignore.  Up first was the NY Strip Steak ($26), which was an impressive cut of meat.  After sampling it, I have to say it's one of the best, affordable steaks I've had in the city.  Accompanied by roasted fingerling potatoes (which were described as having a memory-inducing, familiar earthy flavor) and fresh corn succotash, this is my idea of a perfect summer meal. 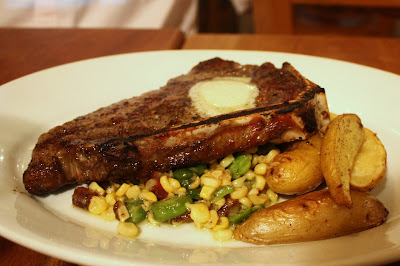 I also sampled the Grilled Pork Chop ($24), which rounded out 3 of 3 perfect proteins on the table.  Another large portion, the meat was almost melt-in-your-mouth-soft and had a sweet ham-like flavor, with a hint of smokiness from the grill.  Served with firm wax beans and a frisee salad (the only off-note of the night- the mustard dressing reminded me of burnt charcoal), the combination of greens and meat were appreciated. 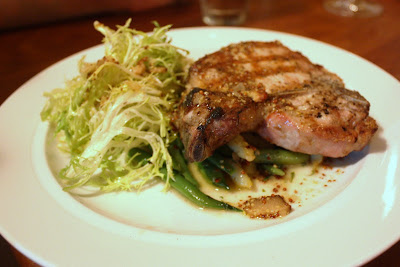 The dessert menu at Meme is tiny- only two options (as well as a list of cheeses).  Since the meal was deemed a belated engagement celebration, ordering both of them to share was a must.  My choice was the Black Plum Tart ($7), which can only be described as a gourmet Toaster Strudel.  A thick layer of fried phyllo dough held up thin slices of tart black plum.  The thick plum reduction had enough sugar to make each bite almost jam-like, and the fresh whipped cream and sprinkles of powdered sugar gave it that extra special touch. 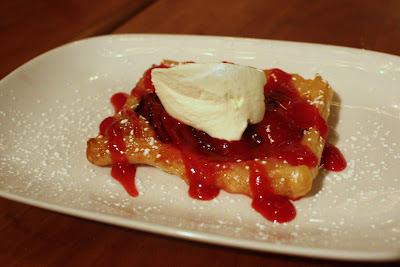 As much as I liked the plum tart, the real dessert winner was the Chocolate Ganache Cake ($8).  The word ganache always makes me think of thick, bitter dark chocolate, but this cake was more like a fluffy, semi-sweet brownie.  The outer edge was slightly crispy, but yielded to a soft, almost gooey inside.  I easily could have eaten the accompanied creamy vanilla gelato all on its own, but the combination of chocolate and vanilla is timeless.  Split among three, the two small desserts were just right to end the meal. 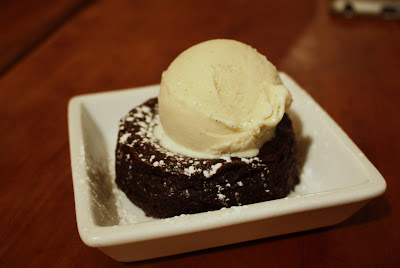 There is nothing negative I can say about our dinner at Meme- the food was classic yet creative, the flavors seasonally appropriate, the portions satisfying, and most dishes well-priced (with 30% off, even better, although our server at first charged us full-price).  With its quiet, casual, neighborhood feel and stellar location, I can certainly see myself returning.  Best of all, the meal was the start to yet another lifelong friendship I am thankful to receive as part of joining a new family.