Food trucks.  I find a lot of people are surprised that we're generally wary of/don't frequent them.  I recently read somewhere that the average American eats out 5-6 times a week, and most of these meals are lunches.  If food trucks qualify as eating out, this actually makes sense.  If you are in or around University City during lunchtime, and you're an "Average American," chances are you're hitting up one of the dozens of mobile restaurants.  Our 1-3 meals out per week usually fall on the weekends at dinnertime, but this week we went out on a limb and hit up KoJa, a classic Penn campus truck serving Korean and Japanese food (hence the name). 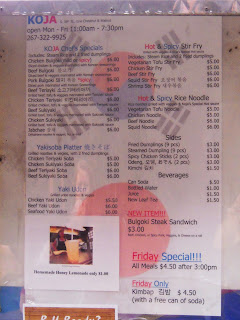 Many of the trucks are only open during the lunch rush, but KoJa is one of the few that seems to be open whenever you need them.  Their truck is easy to spot, colorful and bright, a big step up from the plain silver exterior they had when we were undergrads. 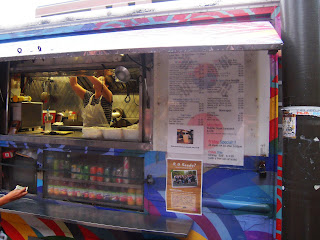 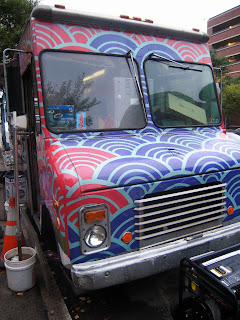 Thankfully there was no line when we went- I find the long lines at some trucks negate the convenience of ordering your food on the sidewalk.  The server was friendly, although not particularly interactive.  J wanted to try a few items and started with the steamed dumplings ($3).  Nine mini dumplings were accompanied with a side of sweet, garlicky soy sauce.  Upon first bite we first noticed the thick, chewy wrapper.  J compared it to "a big bite of pasta," which isn't a positive comment.  We were also unsure of the contents of the dumpling- chicken? Mashed vegetables?  It probably shouldn't be that difficult to tell. 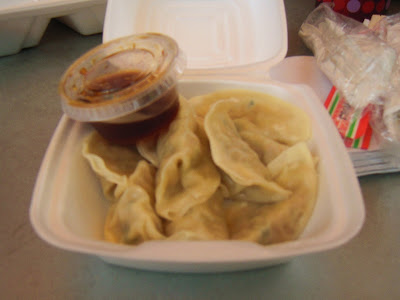 While the dumplings didn't hit a high first note, I was pretty much in love with the Chicken Stir Fry ($5).  An interesting take on stir fry, as all the items weren't fried together, but with a bit of rearrangement and a few good mixes, I was good to go.  Large cubes of chicken are cooked in a spicy red chili sauce (similar to sriracha), alongside shreds of cabbage and onion.  The pile of steamed white rice seemed large in comparison to the smaller quantities of meat and veggies, but eventually I realized rice was what was keeping the spiciness at bay.  I can tolerate a good amount of heat and this hit the spot.  The dish was also served with two fried dumplings- the same as J's side order, but with an ever-so-slightly crispier exterior. 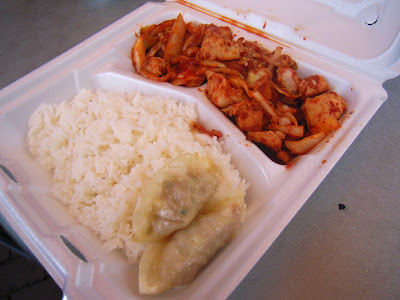 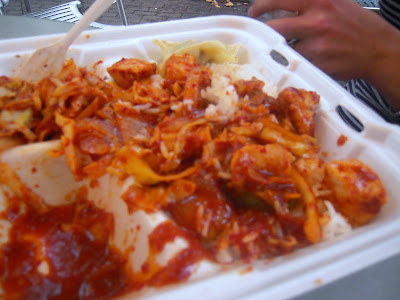 A magazine clipping posted on the side of the truck announced the Bulgogi Steak Sandwich as one of the Top 10 latest and greatest sandwiches in the US.  We're not sure the exact source of this ranking, but we couldn't pass up a sample of the sandwich ($3).  Served on a classic hoagie roll, it actually resembles a typical Philly cheesesteak- slivers of cooked beef, onions, peppers, a creamy melted white cheese (my tastebuds say American), and a dab of sweet chili sauce.  22nd and Philly recently named this sandwich as one of their favorites in the city, but ours wasn't anything special.  The marinated meat had great texture, but it could have used a lot more flavor. 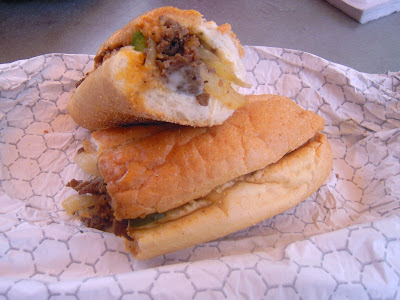 As a quick, cheap dinner KoJa (and most of the other food trucks on campus!) certainly sufficed.  It's a longstanding business for good reason- inexpensive, flavorful food that targets the right market.  However, we both walked away with the mutual agreement we wouldn't run back.  Next time we're in the mood for a food truck dinner, we're hoping to check out one of the latest additions, Cucina Zapata.