A good brunch never fails to hit the spot- we've waxed poetic about this late morning meal more than once.  After a few days in Florida being slaves bridesmaids in our older sister's wedding, we needed to spend the day catching up on errands and putting in a few hours at work. We decided to treat ourselves to a meal out to start the day.  There is a little weekend brunch spot that I occasionally pass on my way to Trader Joe's, but I had never really heard anything about it.  The name "Day By Day" doesn't do much for me either, but its convenient location between home and work made it a good option for the occasion. 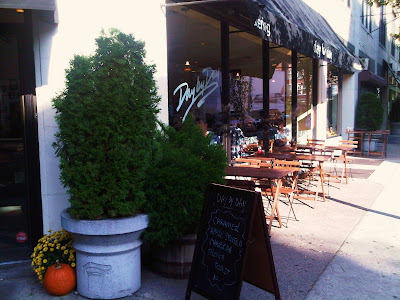 We walked in a few minutes after they opened at 10 AM, and it was already almost full of diners- a good sign right off the bat.  While we were waiting to be seated, I scanned the baked goods menu- each section of the menu is posted at least once on chalkboard menus scattered throughout the space.  In order to cram as many patrons in at once, we were seated awkwardly close to another duo... practically at the same table.  Oh well, I hear communal dining is the new thing. 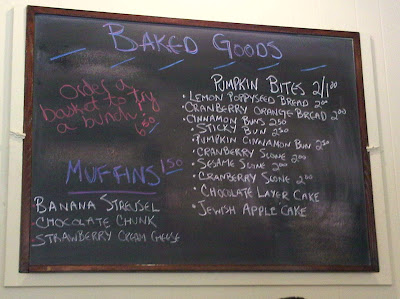 DBD serves La Colombe coffee, but I had about eight cups more coffee this weekend than I typically do, so I opted to start with a pick-me-up of the sugar variety.  We chose to try the pumpkin bites (2 for $1).  The mini-muffin/donut hole hybrid had a subtle pumpkin flavor that gave way to more of a cinnamon and nutmeg spiciness.  A generous coating of cinnamon sugar added sweetness to balance the spice, as well as giving the moist and fluffy cake a crunchy exterior. 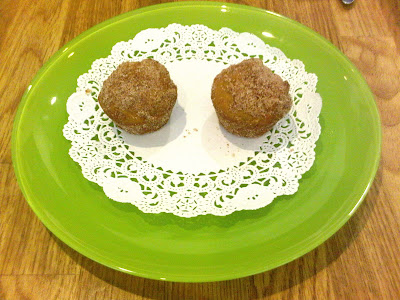 The menu has all the brunch staples- from pancakes to poached eggs to Huevos Rancheros- as well as a specials menu that I assume changes from time to time.  A ordered from the "regular" menu- the potato pancakes benedict ($12.50).  DBD keeps it simple- no heaping sides of hash browns or toast come with each dish, just a few pieces of fruit.  Two flat palm-sized potato pancakes were made with shredded potatoes cooked to a crisp.  I really enjoyed the crunchiness of the pancake, as the toppings are on the soft side.  Poached eggs released their golden yolks over a bed of smoked salmon.  The ultra savory yolks were well complemented by the salty salmon.  A very thin Hollandaise sauce was undetectable, which was actually a nice change- no overpowering flood of butter. 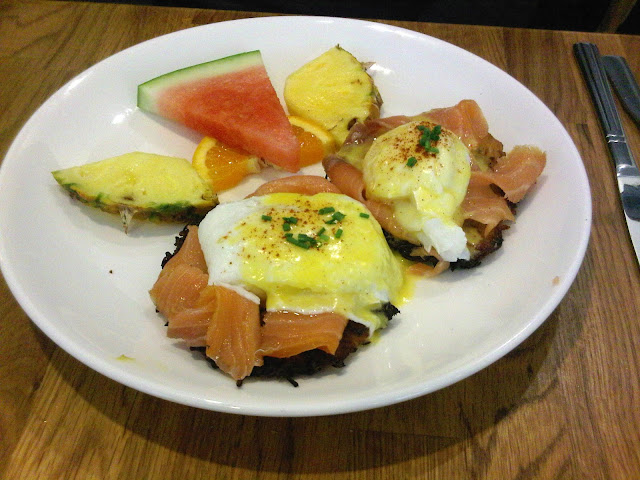 Since A's dish was savory, I was "forced" to order something sweet.  This was a no-brainer for me- the special french toast of the day- caramel apple stuffed french toast ($10).  Four super thick slices of challah sandwiched a gooey cream cheese, cinnamon, dried apple, and walnut filling.  Fried in an egg batter and served hot with a glazed apple topping, this was the definition of indulgence.  I've tried my hand at stuffed french toast, but DBD definitely out did me here, especially with the pool of caramel butter sauce at the bottom.  You had me at gooey cream cheese. 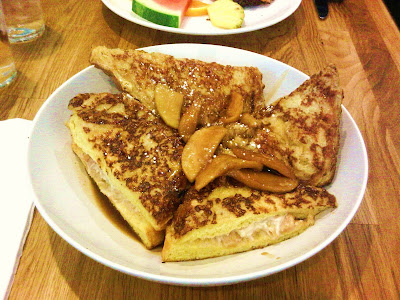 Although the food wasn't anything new or particularly exciting, I think that they seem to excel at making very solid versions of all the brunch classics- and I'm not really looking for anything more.  Judging by the steady stream of customers, Day By Day already has a large group of loyal regulars.  You can call ahead to save a spot if you're planning a mid-brunch-rush visit.  They also serve lunch during the week, and run a catering business.  I need to stop in again soon, if only for some baked goods!