I'm definitely a creature of habit.  When my boyfriend comes to visit, I always cook a somewhat fancy dinner on Friday night, and we'll go out on Saturday- that way the 90% PHL flight delay rate won't interfere with a reservation.  This week we had a leftover butternut squash from the CSA, so I planned to make a rather elaborate butternut squash ravioli.  After poking around the Rittenhouse farmer's market on Saturday, I realized the bf didn't even know what a butternut squash looked like... so I present to you, a butternut squash.

How cool is that??  A fun spin on a carved pumpkin.  But no, seriously, look for this in your grocery store or farmer's market:

I did a little prep work and cooked the squash a few days ahead when I was already heating up the oven for some beets.  Just cut the squash in half lengthwise, dig out the seeds, place it face down on a baking sheet, and bake for about 30 minutes at 400F.   I let it cool for a bit and then scooped out the flesh and stored it in the fridge till I was ready for it.

On Friday, the first thing I did was prep my pasta dough.  I've made pasta before, and it's super easy.  I did modify my recipe quite a bit, using different flour, an egg substitute, and no oil. 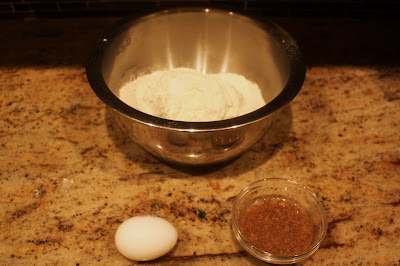 Mix salt into the flour.  Make a well in the flour and add your eggs into the well- we were low on eggs so I used one regular and one "flax egg"- 1 Tbs flaxmeal plus 3 Tbs water, which also gave my pasta a fun flax-flecked appearance.  From the center, mix the flour into the wet ingredients, then slowly add the water until all the flour is incorporated.  Knead for a few minutes until the dough comes together in a ball, then let it sit for at least 15 minutes.

While my dough was "resting," I prepped some ingredients for the other aspects of the meal.  I had planned a mushroom sauce, so I thawed out some ground beef and chopped a medium onion and a package of mushrooms. 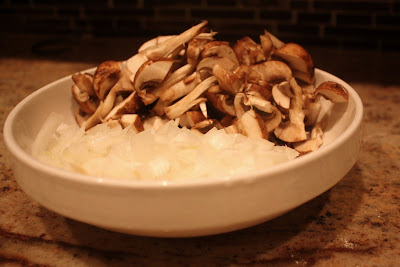 I also sauteed two cloves of garlic and a shallot in a little olive oil and mixed it into my pre-cooked butternut squash.  After a couple nights in the fridge, the squash had released some liquid, allowing me to pour that off in order to make a thicker ravioli mixture. 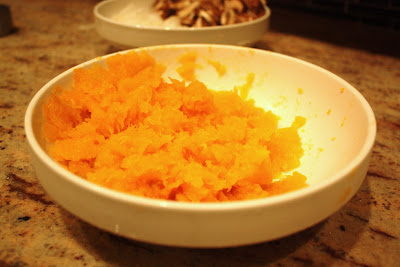 By far the "hardest" part about this recipe was forming the ravioli pieces- it takes a bit of elbow grease and a bit of time.  Keep a little bowl of flour handy to dust your surfaces to prevent the dough from gluing itself down.  I took a small fistful of dough at a time and rolled it out on my Silpat.  As I've said before, roll that dough out as thin as you can- the thinner the better.  I was trying to get dinner on the table, so I was a little sloppier about it- which is fine if you don't mind fat pasta. 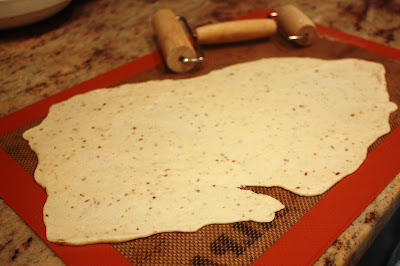 I really wanted to make consistently sized, round ravioli but couldn't come up with a good instrument with a sharp edge, so I just eye-balled square pieces with a butter knife.  Place the squares (or circles!) on a floured piece of wax or parchment paper.  And take your time- it may seem like the cut pieces are drying out but this is actually a good thing. 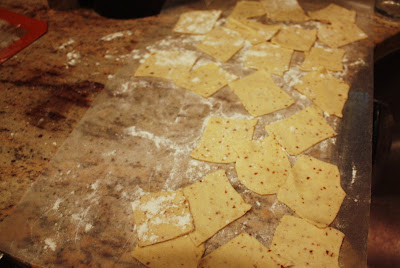 After I cut all the pieces, I finished prepping the filling, mixing a quarter cup of crumbled goat cheese, a splash of cream, salt and pepper and a few grates of fresh nutmeg into the butternut squash.

Making the actual ravioli is done in three easy steps.
1. Place a small blob of filling on top of a piece of dough (yes, this is a scientific process).  After a few you will get a good feel for how much you can use without overflowing. 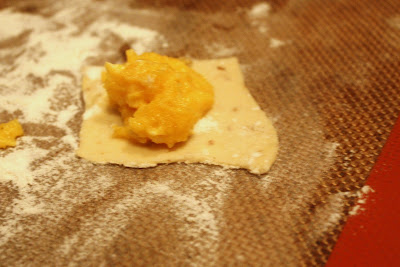 2.  Dip the tip of your pointer finger into a small bowl of water and trace the outside of the dough. The goal is to re-wet the edge of the dough.

3.  Place another piece of dough on top and press down along the seam.  It's not so much a sliding motion-  more like you're pressing a row of buttons. 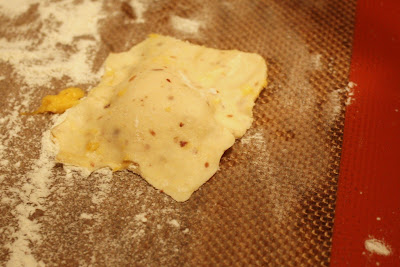 If you're going for visual appeal, you can trim the edges.  Then place the ravioli back on your floured surface.  Repeat until you run out of dough or filling! 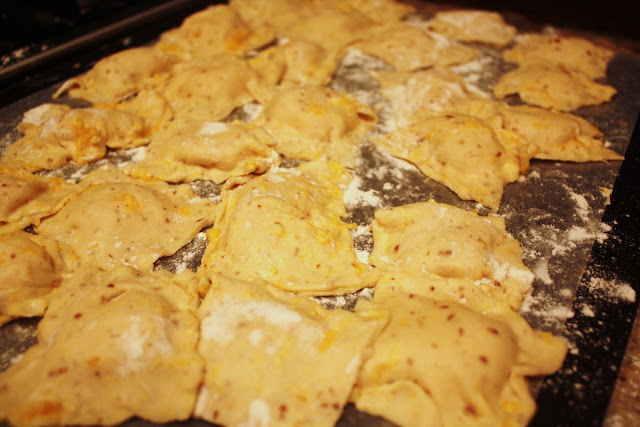 While I boiled a pot of water for the ravioli, I sauteed my pre-cut veggies and about 2/3 of a pound of ground beef, seasoned it all with salt and pepper and 1/2 tsp of thyme, and let it simmer in a 1/4 cup of chicken broth. 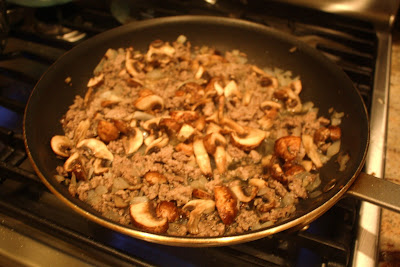 When the water was rapidly boiling, I dropped in 6 to 7 ravioli at a time.  If you try to cook too many at a time, the weight of them will cause them to stick to the bottom.  Thankfully, they float to the surface after about two minutes, inviting you to scoop them out into a waiting serving vessel- I opted for a shallow bowl. 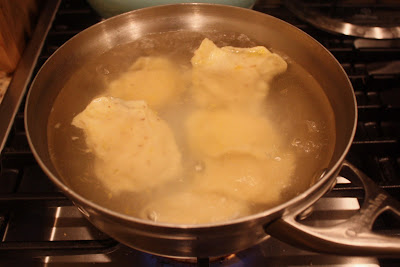 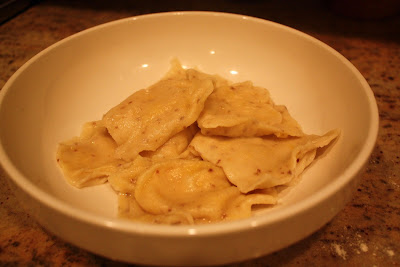 When I had my last batch in the water, I added a few handfuls of spinach and a splash of cream to my "sauce"- which really turned out as more of a chunky topping. 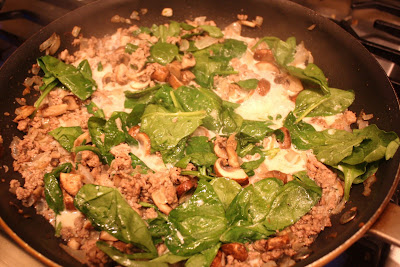 I topped everything off with a sprinkle of goat cheese and we dug in. Everything came together pretty well- I thought the nutmeg and sweet squash in the filling and the more savory mushroom-thyme flavors of the "sauce" balanced one another.  The fresh pasta was a "fancy" touch, and a fun way to get my boyfriend involved in the cooking process- two ravioli-makers are faster than one! 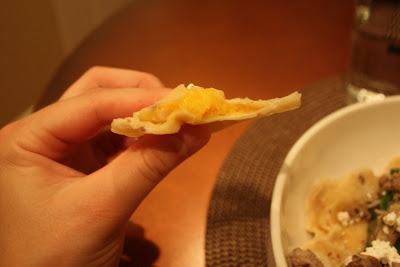 While the meal was certainly more labor intensive than our usual "thirty minute meals," a bit of planning ahead  helped to get all of the components to come together at the same time.  Another one of my "creature of habit"... habits... is to write out all of the ingredients and a general plan on a notecard- an easy way to keep track of the cooking process along the way!
Posted by A and J at 9:02 PM