A couple of weeks ago, Groupon offered a deal we just couldn't refuse- a six-course meal for two at the Argentinian-Italian restaurant 943.  For $30.  Which breaks down to $2.50 per dish.  Are they crazy? We quickly scored Saturday night reservations- a requisite seeing as they turned down every single group that came in without one.  The space is nestled right smack in the middle of the Italian Market, in a surprisingly airy and spacious spot off the awning covered street.  Black and white tiled floors, sparse decorations, vast front windows, and plain white walls make the space seem somewhat industrial and sterile.

As soon as we were settled in at our table, the waitress brought us a complimentary ramekin containing bits of a sharp white cheese and a mildly spicy hard sausage.  Even though I felt a little weird eating them with my fingers, it was certainly a unique start to the meal.  They also provided us with a more standard bread basket- slices of soft and crusty Italian baguette served with a bland sweet pepper oil for dipping.  A little seasoning would have gone a long way.

There were two options for almost all of the courses in the deal (we ordered from a special tasting menu) so we were able to eat everything they were offering.  The first course was a salad- I chose the Ensalada de Atun- essentially a fancy tuna salad made with calamata olives and red onion served over spinach.  Half of a flavorless fig and a sweet balsamic reduction finished the dish.  I was expecting a thinly sliced seared tuna, but still enjoyed the pile of fish- the slight brine of the olives was enhanced by the sea-salty tuna. 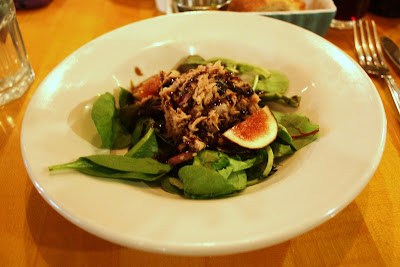 The other salad was a simple house variety- iceberg lettuce and a few cherry tomatoes simply dressed in a lemon-y olive oil and a bit of salt.  We enjoyed the slightly tart dressing, but this salad was still incredibly boring.  A few more fresh vegetables wouldn't hurt. Of note- the portions of the salads were much smaller than standard portions, which as part of a tasting menu was much appreciated, but you can expect a larger dose of greens when ordering from the regular menu. 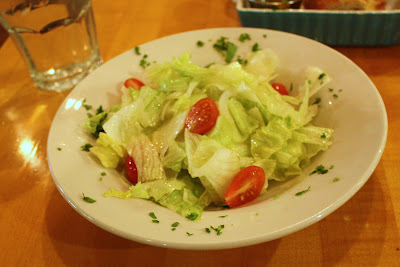 The second course was an empanada.  Our options were ham and cheese, beef, and chicken- we chose the first two.  The filling of the ham and cheese was molded to the floor of it's thick wrap of pastry, making it flake apart a bit during consumption.  I loved the crispy rounded edge of the crescent shaped empanada, but the salty flavor of the filling was rather one-note, reminiscent of a grilled ham and cheese sandwich straight from an elementary school cafeteria.  The more robustly packed beef empanada had a good mix of juicy ground beef cooked with some chopped olives and a bit of chili powder, lending the illusion of a pastry wrapped taco.  Enjoyable, but again just relatively boring.

Up next was a sausage course- choice of blood sausage (morilla) or a spicy chorizo.  We've never had blood sausage so we were excited to try something new.  Made by mixing pig's blood, pork fat, a few chunks of meat, and cream together to form the filling, this was definitely... interesting.  It had the texture of soggy bread- we actually both commented that it felt like we were eating a non-food substance, almost like a paper pulp.  The flavor was slightly metallic and the dark color off-putting-- I think it is safe to say blood sausage is not our new favorite food.  However, the chorizo was a highlight of the meal- snappy skin, well-seasoned meat, the right amount of greasy juice oozing out on every bite... I could see this being fabulous in a sandwich or soup.

Our fourth course was a shared vegetable dish- grilled asparagus served over a white bean and tomato base and topped by a fried egg.  The bean mixture was hearty and tasted as if it had been carefully tended through a long and slow stew.  Vibrantly green spears of asparagus were slightly smoky, their softness pairing well with a bit of fluffy fried egg white. 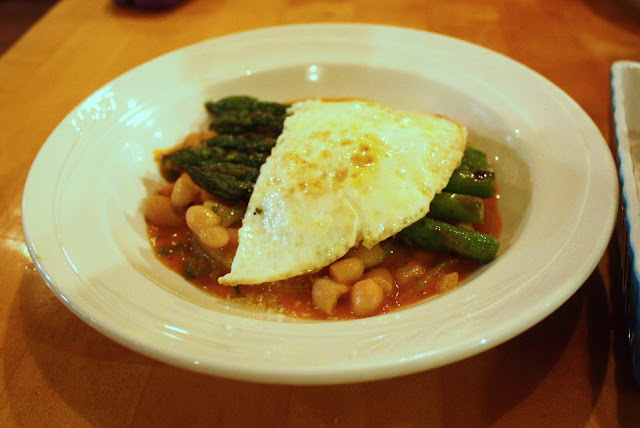 Our main entree options were the ravioli of the day (two choices here), a grilled NY strip steak, or short ribs.  A chose the butternut squash and goat cheese ravioli served with a mushroom sauce.  Large, thin squares of fresh pasta pocketed a small dab of sweet and creamy filling.  A shallow pool of earthy mushroom broth and a dusting of parmesan contributed an array of savory flavors.  The pasta had a firm bite without being chewy- after my foray into fresh pasta making, I can really appreciate a restaurant quality version. 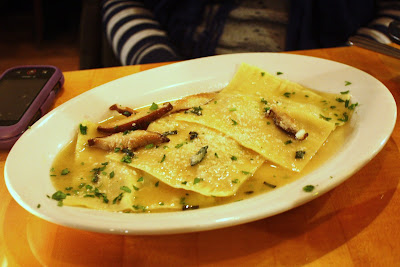 Under A's direction, I ordered the NY strip- a half portion of meat that still came as a solid serving size.  My medium-rare order was cooked to more of a medium-well, but the meat was still flavorful and juicy (aided by some melt-in-your-mouth marbling) with a nice peppery crust and beautiful grill marks.  Served with a simple side of green beans and fingerling potatoes, it just seemed like a standard steakhouse meal.  The oily, parsley-heavy chimichurri sauce wasn't quite enough to take this dish to the next level. 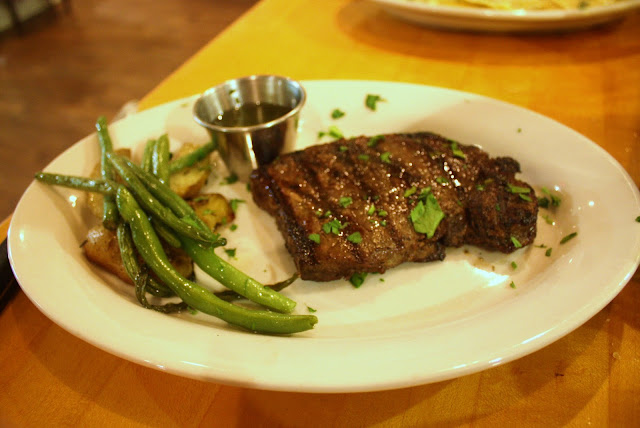 We were understandably stuffed at this point, so we were again thankful for small portions, this time in the form of dessert.  We're not typically fans of phlegm-y flan, but the sweet and creamy version at 943 ended up being a hit.  The dessert was more firm and less jiggle, and was served with a blob of dulce de leche caramel, the plating of which seemed like an awkward after-thought.  Regardless, the milky custard and sweet caramel made for a supremely mouth-watering end to the meal.  A simple wedge of flourless chocolate cake was fudgy and rich, but nothing exciting.

There is absolutely no denying that this meal was daylight robbery on our part- a pretty solid meal for incredibly cheap.  But I still left with a feeling of disappointment- everything was just. so. basic.  I really wish they would have delved a little deeper into authentic Argentinian flavors instead of playing it so safe.  I also felt that the fusion of the two focus cuisines wasn't all that translatable, emphasized by the restraint in the kitchen- were there really any dishes that incorporated concepts from both?  I'm glad we could check 943 off our list, but we won't be rushing to return.