Hopefully everyone had a terrific Thanksgiving holiday weekend- A & I were split up as I traveled home to Florida and she stayed in the Philly area.  Before I left for home, I met up with a friend who was in town for dinner at Cooperage- a small, casual spot located in the Curtis Center on Walnut Street.  When Cooperage originally opened, the food was heavily influenced by the South, with menu items like fried green tomatoes and mac n’ cheese.  As it has evolved, the menu has become a little more generic with just a subtle Southern accent.


The space is broken into two distinct areas- a U-shaped bar with a TV broadcasting the current game and a quieter section with booths for diners.  The décor seems Middle Eastern, with ornately patterned curtains, lots of throw pillows, and sequin embellishments- certainly beautiful but gives the restaurant a bit of an identity crisis.  We were thankful for the quiet booth- the host made sure to let us know that our table would be an “intimate” setting.  The limited number of patrons meant we got perfect service from our friendly waitress.

We split a couple of appetizers- starting with one of the remnants from the original menu- the pulled pork nachos ($8).  Served on a wooden board, four thin and crispy tortilla chips acted as the base of little pulled pork mountains.  Minimal sauce coated the finely shredded meat, allowing the slow-cooked smoky flavor to shine through.  A slightly sweet pineapple and purple onion salsa and a bit of lime crema added upscale nacho accoutrements, while a drizzle of sriracha sauce made for customizable spice levels.  While this was no pile of gooey, meaty nachos, we both really enjoyed the more “grown up” version of the dish. 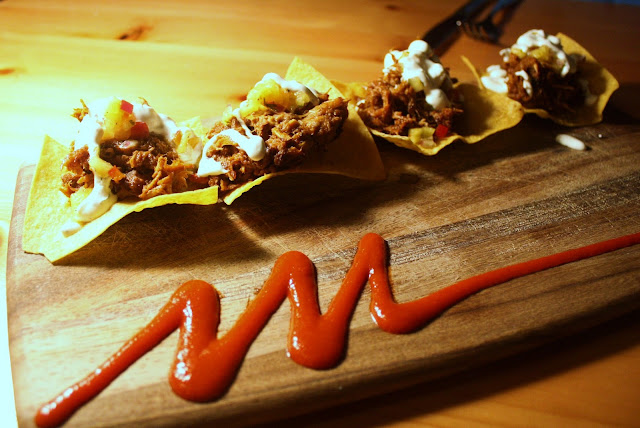 We also ordered traditional buffalo wings ($8)- 10 pieces of fried chicken tossed in a not-spicy-at-all sauce that could have used a good kick of heat.  We both felt that the wings could have used more sauce, but the creamy bleu cheese dressing made up for this deficiency.  The meat itself had a great texture and flavor, as if it’d been marinated in some kind of a tenderizer.  Crunchy carrots and celery sticks rounded out this very conventional appetizer- a good rendition, but certainly not the best. 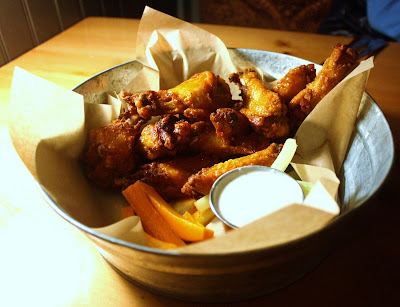 I tried to pick out the most “Southern” entrees but ended up ordering the crab cake sandwich ($11)- a well-formed hockey puck patty of finely shredded crab meat served atop a pillow-y brioche roll.  Simply adorned with a fresh leaf of butter lettuce and a drizzle of aioli, the lightly fried crabcake played the starring role.  The texture of the egg-washed brioche highlighted the softness of the crab and made each bite very gratifying.  All sandwiches are served with potato chips, which can be substituted with fries (sweet potato or regular) or a salad for an extra charge.  The $3 side salad was completely worth it- a generous pile of cucumber, peppers, tomatoes, carrots, purple onions, and mixed greens tossed with a light house vinaigrette.  Perfect for satisfying the constant vegetable consumption requirement. 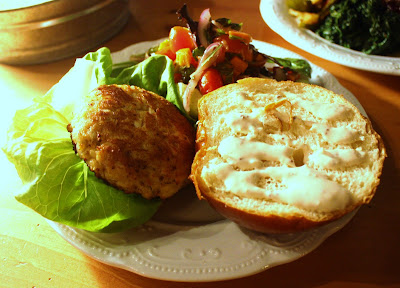 My friend ordered the BBQ chicken ($14), a quarter bird with crispy darkened skin slathered with sauce.  He chose sweet potato fries and spinach as his two sides, but the kitchen sent out sautéed zuchhini instead of fries.  Fine by us- we got a large basket to share as an apology.  I didn’t think the fries were particularly sweet potato-y (quite light on the inside) but they were super crispy, salty, and addicting. 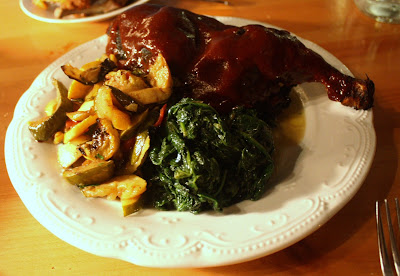 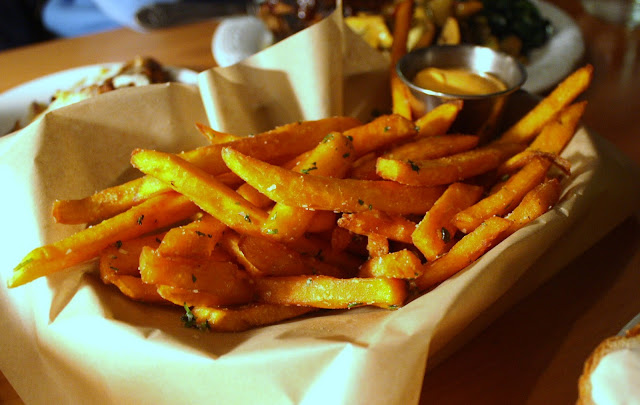 I’m a little disappointed that we didn’t get to experience the more original initial menu offerings, but Cooperage provided us with a great place to catch up and eat an inexpensive, tasty dinner.  The multiple personality aspect actually benefits the restaurant by providing a little something for everyone.