This isn't the first time, and it certainly won't be the last, but after reading a recent review of a new restaurant (Grand Opening signs still up!) nearby, we were inspired to check it out for ourselves.  After some post-work shopping on Chestnut Street, it made sense for us to head right to Wajoe, a casual Korean BBQ restaurant that fits in well with the sushi and Thai restaurants in the area. 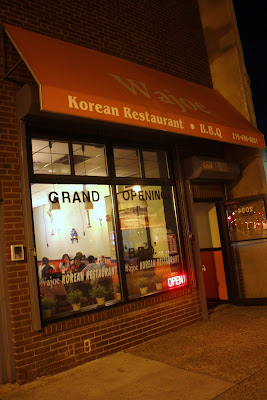 A has a recent obsession with anything spicy, so she was a big proponent of making a visit.  After scouring the Yelp reviews, she made the executive decision to opt out of trying the true Korean BBQ dishes- even though each table is equipped with a fancy built-in grill complete with individual venting systems.  Clean lines and warm colors complement the industrial look of the self-cooking equipment. 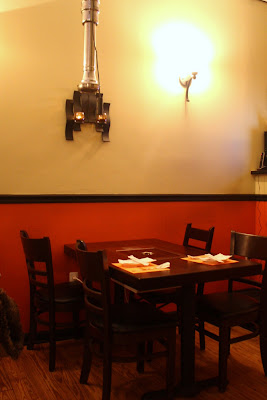 The menu is nicely divided into categories- apps, BBQ, hot pots (soups), noodle dishes, and rice dishes- and includes basic English descriptions and pictures.  After we placed our order, we received the obligatory Korean banchan including the standard kimchi.  The fermented, pickly cabbage maintained a good crunch and a mild spiciness- good by us.  The rest of the banchan was served in individualized plates and were a little on the odd side- a rather plain coleslaw, cold steamed broccoli, and soft, slightly sweet potatoes.  They just seemed so.. American.  And plain.

Although many of the appetizers sounded good, we decided to try something new- the ddukbokgi ($8.99), a mix of "rice cakes" and vegetables in a spicy chili sauce.  Rice flour and water are mixed together and shaped into thick, chewy tubes, and served with thinly sliced carrots, onions, and cabbage that are stir-fried with a sweet and spicy red sauce with a hint of garlic.  Simple and delicious. 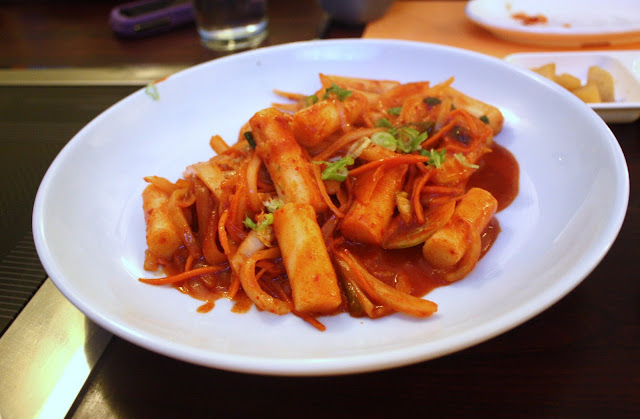 Since I branched out a little for the appetizer, I felt justified in ordering my favorite Korean dish- the Dolsot Bibim Bap ($10.99 for the beef version).  Served in a piping hot bowl, the dish includes white rice, spinach, carrots, cucumber, bean sprouts, a few shavings of rib-eye, a sprinkle of dried seaweed, and a fried egg (the piece de resistance).  Obviously a solid mix of ingredients, but the key is breaking open the egg yolk, adding a good bit of chili sauce, scraping up the crispy rice from the bottom of the pot, and mixing everything together.  I probably should have let the rice crisp up a bit more, but the gooey mess was everything I remembered it to be.  I'm big on having a good mix of flavors and textures, so this dish clearly suits me well. I only wish the chili sauce had been slightly spicier.