I had another bout of baking inspiration this week.  They seem to be coming more frequently... I blame the impending doom of winter.  Although I certainly can't complain about the gorgeous days we've had recently!  Anyway, Philly Weekly recently had a lovely feature of 50+ Things You Must Eat Or Drink in Philly.  I'm a sucker for a good list, but one item in particular struck my eye- the Bacon Brownies at Watkins Drinkery.  As PW stated: "Salt and chocolate. It's a thing."  I have to agree- that Salted Caramel Budino (with chocolate cookie crust) at Barbuzzo is nothing short of phenomenal... but I'm getting distracted again.  Although we were fans of Watkins, the trek is a little far, so I thought to myself, "Self, how hard can it be to make brownies with bacon in them?" 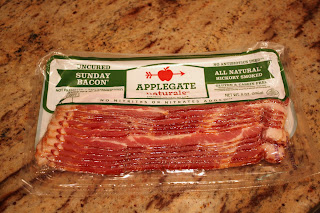 I ended up choosing a recipe that was a little more ambitious, so truthfully, the answer to that question is "moderately hard."  Or maybe just "easy to screw up."  Based on this recipe, the brownies have multiple components, starting with the simple task of cooking the bacon.  I used a very "natural" version that I have found to have a great texture and flavor.

The recipe only calls for two pieces of bacon, which is the first thing I would change- more bacon please!  Next time I would go with at least twice as much meat.  I crisped up the bacon to make it easy to crumble- an important quality for this treat. 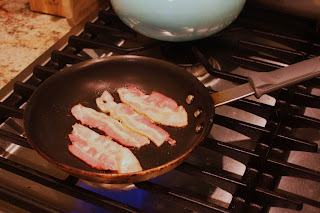 After the bacon is cooked, remove it from the pan to cool.  Then add 1/2 cup of cream (I used half and half) to the pan of bacon grease- it will bubble a bit and then cool to make bacon-infused cream.

The next part is somewhat difficult- making the caramel.  Reading through the recipe made it seem super easy, but when you add high heat and sugar, you can often end up with a sticky disaster.  The first step is melting one cup of sugar in a pan.  As I said, the recipe called for high heat, which meant the sugar melted rapidly and required a lot of attention.

Unfortunately you can't exactly turn down the heat of the sugar once it has reached its melted state, so my sugar ended up with a mildly burned quality- not good for caramel.  As soon as it was melted (it gains an amber color as it melts) I turned the heat down and added a stick of butter, which created a rather combustive reaction.  Super bubbly.

After the butter melted, I turned off the heat, poured in the bacon cream, and crumbled the cooked bacon into the mix.  Because my sugar got a little too hot, there were little hardened sugary clumps in the mix.  I figured it'd all be going back into the oven anyway, and let the mixture begin to cool. 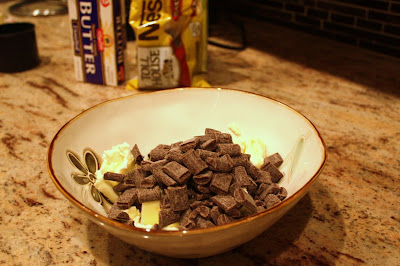 The next step is making an actual brownie batter.  Another stick of butter and 1/2 a bag of semi-sweet chocolate chunks were melted in the microwave- 30 seconds, stir well, repeat until blended (don't overdo it!).  Combine this with 1/4 cup of cocoa powder, three eggs, another cup of sugar, 1 tsp vanilla extract, and 1 cup of flour.  I was surprised there wasn't any salt (wasn't that the idea?), so I added a teaspoon to the mix.

Double line an 8" square pan with aluminum foil and grease with butter or non-stick spray.  Spread half of the batter into the bottom of the pan- this requires some patience as the batter is pretty thick.  Then drizzle a third of the caramel over the batter.

Next, spread the remaining batter over the top and add the rest of the caramel.  My caramel was nowhere near cooled so it pooled over the top.

Bake at 350F for 40-45 minutes.  While your house begins to smell chocolate-y and delicious, take gratuitous pictures of your cat.  Wait, no, that's not part of the recipe... 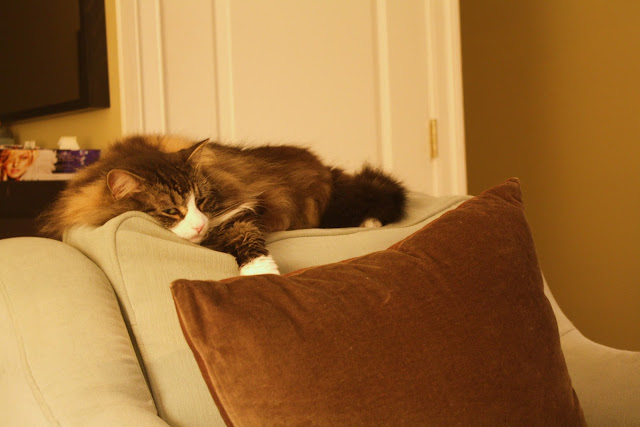 After the surface of the brownies was firm, I allowed them to cool for about an hour and a half.  The high butter and sugar content makes them incredibly sticky and moist- and difficult to cut.  The cooler, the better.  Cut into small pieces- trust me, a few bites is all you need.

As I indicated at the beginning, the brownies aren't terribly bacon-y.  There's a very mild hint of bacon, mostly due to the small chunks that are few and far between.    And since my caramel wasn't exactly caramel, the brownies were instead just extremely dense, chewy, and rich-- and extra sweet! 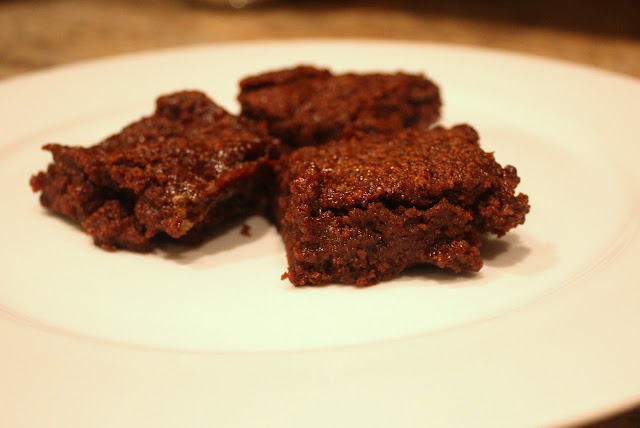 Next time I would absolutely use more bacon (and more salt), and perhaps follow a more exact recipe for caramel-  I think a candy thermometer may be essential.  Regardless, these were some darn good brownies.  We wrapped up about half the pan into individual servings and popped them in the freezer- a single pan will serve a sweet tooth for quite some time.
Posted by A and J at 9:23 AM