After our trip to Royal Tavern a few weeks back, I was positive the next place to cross off my list was its sister restaurant, Khyber Pass Pub.  Well, to be honest I had made the decision about the time I saw the menu at Khyber- full of Southern delicacies like fried okra and fried green tomatoes (yes, there is lots of frying down South).  Khyber just celebrated their one year anniversary as a restaurant in its new rendition- previously, it had been primarily a small live music venue.  Its location in the midst of Old City probably suited it well for more of a nightlife spot, but I'm happier with another great restaurant.

While the bar scene is alive and well, there is a separate (slightly) quieter dining room for focusing on the food.  While a friend and I caught up, I placed an order for two of my most favorite Southern foods that I never see in the Philly area: boiled peanuts and fried okra, both of which are actually part of the Daily Specials chalkboard menu (they've been specials for at least a little while, but I'd still hurry to get them while you can!).  The boiled (correctly pronounced more like "balled" if you're Southern) peanuts were just like the roadstand variety you can get anywhere in the rural South- boiled for hours in their shells until the entire thing is soft, easy to pull open with your fingers, and holding salty, brined soft peanuts within ($3).  If you've never had boiled peanuts, I suggest you change that immediately (recipe found here).  And when you do try them, don't expect them to be at all like the roasted peanut you may be accustomed to!

The second app was actually ordered off the side item menu- a small crock full of fried okra ($5).  Okra is diced into bite size pieces, battered in a cornmeal based crust, and then fried until the vegetable is softened and the outer coating is nice and crispy.  They were served with an "Alabama white BBQ sauce," which I must confess I know nothing about.  It tasted a bit like a thinned out mayonnaise mixed with just a hint of spice.  My only complaint was that the tiny pieces were sort of difficult to eat- it's not something I really want to use a fork for, but dipping made it impossible not to get your fingers in everything.  Together, though, these two starters made for a great start to the meal, giving us plenty of time to peruse the menu and decide on our main courses. 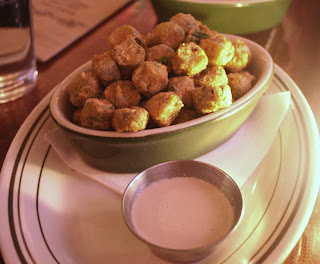 There were so many fun options (the Smoked Duck, Cashew Peanut Butter and Pepper Jelly Sandwich might bring me back all on it's own), but I went with a classic Southern staple- the Memphis-Style Fried Chicken plate ($15).  In order to investigate the authenticity of this dish, we've planned a trip to Memphis for this weekend.  Well, that might be a stretch, but we actually ARE going, and now I'm super pumped to eat the fried chicken.  And to continue my streak of honesty, I'm really not sure what makes this chicken Memphis style.  But I can tell you one thing- it is delicious.  The plate came with a generous three pieces- a wing, a thigh, and a leg.  The crispy, salty coating had a bit of cornmeal in it (similar to the fried okra), and was not too thin nor too thick.  Steaming hot even fifteen minutes after its arrival, the inner meat was juicy and maintained great flavor-- too often, fried chicken is very boring under that thick outer skin. 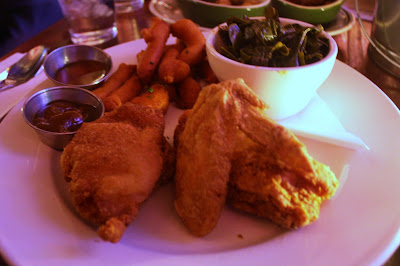 The plate came with two sides, of which I chose a forever favorite, collard greens, as well as another special side item, the hush puppies.  The collard greens are actually vegan, one of a number of dishes offered to our crazy non-animal-eating-friends.  I was actually a little wary, since one of the best ways to make collards shine is to add a good amount of smoked meat.  However, these greens were spicy and rich, while still maintaining their deep earthy flavor.

The hush puppies were extremely strange- if anyone is used to this type of hush puppy, please comment and provide me with the origin!  We're used to hush puppies being fried balls of dense cornbread, but instead, these were long pieces of dough that seemed flash fried like a doughnut.

I wasn't a huge fan (probably because I'm going to be loyal to the type of puppy I know and love), but the two side sauces were particularly noteworthy.  First, the molasses butter combined the dark sweetness of brown sugar and the smooth coolness of butter into something I'd like to drown in- it was basically caramel, before the cooking process.  The other sauce was a pepper jelly, which I have little experience with, but I'm definitely a big fan- sweet yet spicy, it's the best of both hot sauce and sweet jam.

My friend really wanted to try the Khyber Gumbo, a notoriously rich mixture of slow cooked chicken, andouille sausage, and veggies cooked in a Cajun-style deep, dark roux ($8/bowl).  Served over a pile of white rice, this would make a perfect quick, inexpensive dinner on a cold night.  The bite I had was just as I thought it would be upon first sight- rich with the flavors of multiple kinds of meat, with lots of cayenne pepper for a slow burn. 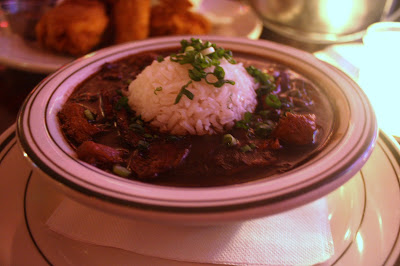 I also got a chance to try a bite from Khyber's extensive barbecue menu, as my friend also ordered the brisket sandwich.  While it wasn't the best barbecue I've had around town, it would definitely hit the spot if a craving arose.

While the scene and food at Khyber are quite different from what you'd find at Royal Tavern, it was somehow exactly as I imagined it might be- a good crowd, but still easy to have an audible conversation, dark, but not in a creepy or romantic way, and great eats, certainly not in a health-conscious manner, but soulful and rich, just like the South.