We've just wrapped up a crazy month at work (although we do seem to say that a lot, don't we?), and as a little treat to ourselves, we decided to jump in on one of Meritage's weekly tasting menus.  I often see these menus floating through the blogosphere, usually highlighting a seasonal or rare ingredient. Otherwise, this little neighborhood gem of a restaurant isn't on the forefront of our must-revisit list, though it really should be.  It's good for just about any occasion- you can catch a game in the front room with a short list of delicious bar snacks, meet up with a group of friends for a fun and filling mix of small plates, or make it a romantic date spot.  We've been ourselves a handful of times- usually for one of their specialty dishes, the Korean Fried Chicken.

Back to the important part-- the tasting menu.  The reason it caught our eye?  Foie gras. Four glorious courses of foie gras.  Five, if you include the amuse bouche, which also incorporated the infamous ingredient.  For a reasonable price of $39/person, no less! 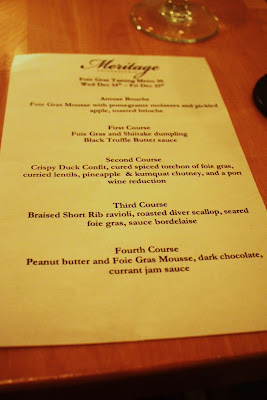 While we love foie (sorry, PETA), we were also recently discussing an article we read in the Economist, highlighting a recent scientific (yay, science) look into what makes good foie gras.  Apparently, some ducks just make bad fatty livers.  Who knew?  The tasting menu came at a good timing, since we were well-primed for some "meat-butter," as J calls it.

Note: the article also has a fascinating picture of how exactly a goose is force-fed.  I'll refrain from showing it here, for those who find it cruel.

Meritage has consistently solid service, and our waitress was attentive without being needy.  Even though we ordered the fixed price, fixed dish menu, it's still nice to have someone checking in on you.  After placing our order (we didn't even need to open the menu), we received bread service, which seemed a little unnecessary, since our amuse arrived almost immediately after.

A little slice of soft toasted brioche was topped with a dollop of creamy foie gras mousse, as well as a couple pieces of spicy pickled apple to add a bit of crunch- it was a good combination of sweet and salty. While just a tiny bite, it set us up for a solid meal to come. 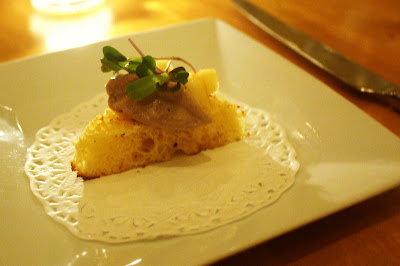 Our second dish arrived a bit too quickly- more than a minute to eat the amuse isn't necessary, but it's nice to take a breath before diving into the next dish.  The first course consisted of two dumplings, stuffed with foie and shiitake mushrooms.  Dumplings have always been a specialty of Chef Anne Coll, which might be explained by the fact that she trained under the dumpling master herself, Susanna Foo.  This rendition was superb- very crispy on the outside, which might be a turn-off to some, but is how I happen to like them.  The inside was rich and meaty, more solid than we expected (more like a meatball than typical foie texture), and dripping with the rich truffle-butter sauce.  Completely over the top, it was definitely one of our favorite dishes of the night. 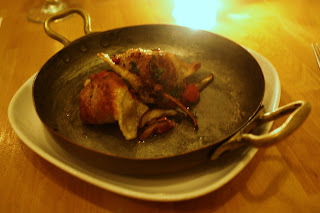 The second course was again extremely quick to come out, making me nervous that our meal would last half an hour, but I was quieted by the flavors- and foie- of the plate in front of me.  While the initial menu called for duck confit, our waitress informed us ahead of time that we would be getting duck breast instead.  Disappointed?  Maybe for a minute.  We did notice that a couple who was seated shortly after us did receive the confit, so maybe it was still in the preparation stage when we arrived.

This was actually my least favorite dish of the night, not because of poor preparation but because of a contrast in flavors I didn't love.  The base of the dish consisted of curried lentils- amazing on their own- and was topped with thin slices of perfectly rare, buttery duck breast.  The busy-ness started when the meat was topped with a sweet, tangy pomegranate reduction.  There was also a small pile of a kumquat-pineapple chutney, as well as the obligatory foie, served torchon style.  A torchon- meaning towel in French- is essentially a long roll stuffed full of foie (or other ingredient), which is then carefully sliced into tight discs.  Overall, we liked each component of the dish, but it didn't come together.  At all. 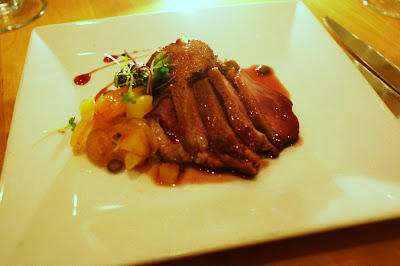 The fourth course redeemed anything we didn't like about the third, presenting us with one of the best dishes we've eaten this year.  A fun little stack of ingredients, topped with the best part of all- a small filet of foie.  Look at that.  It's huge.  The second layer was a monstrous roasted diver scallop, for size comparison- and this wasn't just any scallop.  It was perfectly cooked, meaty yet soft, and surprisingly, a perfect partner to the foie.  We both ate this in tiny slivers, scooping both layers on our forks before taking a bite.  The bottom layer was a single braised shortrib "ravioli" (seemed a lot like a dumpling!) in a bordelaise sauce that complemented the rich meat well.  A side of spinach was a bit of an afterthought, but we always appreciate a spike of greens.  To us, it was almost like two dishes- the foie + scallop, and the ravioli + spinach. 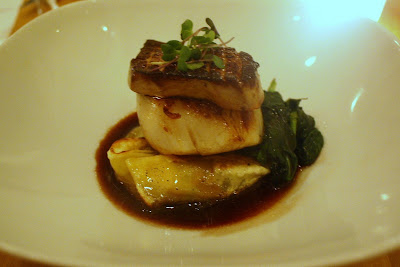 While some savory tasting menus either skip dessert or forego the special ingredient, we were completely fine with a sweet take on the stuff.  Foie mousse was mixed with peanut butter, which actually helped reduce the meaty flavor of the liver.  It didn't hurt that it was encased in a solid coating of frozen dark chocolate and served over a smear of currant jam sauce (reminiscent of a seedless raspberry jam).  The peanut butter and jam combination is timeless, and had us almost licking our plates. 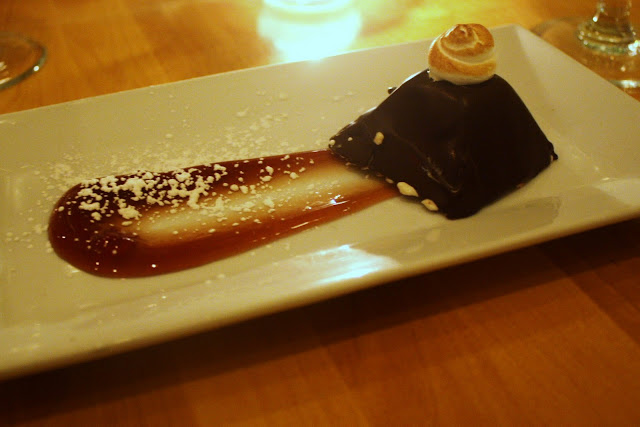 Although foie is known to stir up some controversy, we try to focus on the final product- something absolutely delicious that should probably only be eaten on special occasions in small quantities.  In this case, we felt that the tasting menu was a good way to get our fill, as well as to have a mini-celebration of our recent accomplishments.  As much as we love it, it will probably be awhile until we order foie again (famous last words, probably).  The foie-based tasting menu is no longer available, but we recommend you keep an eye on upcoming options- if they're anything like this, they're well worth it.