While we've recently been professing our love to the gastro side of the gastropub, most of our favorites are a bit of a hike away.  And although we're fine with walking down to Passyunk on a warm day, our Floridian roots keep us indoors more during the winter.  Thus, we were pretty excited to see that American Sardine Bar- cheffed by SPTR's Scott Schroeder- was slated to open a little closer to our neighborhood.  It's still technically in South Philly (since when is "Point Breeze" a common name for the area?), but just a couple blocks past Washington. 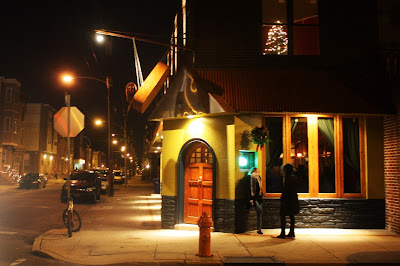 The corner spot has the best marker- a giant hanging sardine can, rolled open-- you can't miss it.  While the downstairs has a long bar that takes up the majority of the narrow room, the upstairs offers a quieter, more open space.  We sat ourselves at a communal table and admired the eclectic art while deciding on some eats.  The menu isn't provided to each individual diner, but is posted on a chalkboard located in the corner of the room.  Apparently it's common for groups to snap a picture on an iPhone and pass it around the table.  Thankfully, it's pretty simple, consisting mostly of sandwiches (notably, no burger, which didn't break my heart but might be disappointing to others). 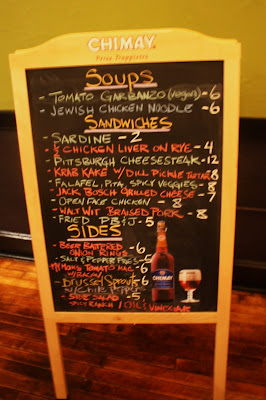 We ordered a mix of items in an attempt to eat as much of the menu as possible.  J started with the Jewish Chicken Noodle Soup ($6, if you didn't notice on the above menu), which epitomizes the Schroeder specialty- comforting and familar, but with a bit of a spin.  The soup was steaming hot, with loads of egg noodles, soft carrots, shredded chicken and a touch of dill for extra flavor. 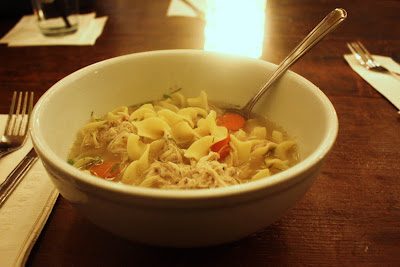 We put my fiance in charge of eating one of his favorite sandwiches (I've decided he literally lives on pulled pork sometimes), the Walt Wit Braised Pork sandwich ($8).  He was slightly skeptical, since he wasn't sure he'd like the flavor the Philly-area beer lent to the meat.  Thankfully, the flavor was subtle, letting the pork take center stage on a perfectly toasted, odd shaped ciabatta roll spread with a creamy goat cheese sauce.  I would never think to put pulled pork and goat cheese together, but the combination was delicious. 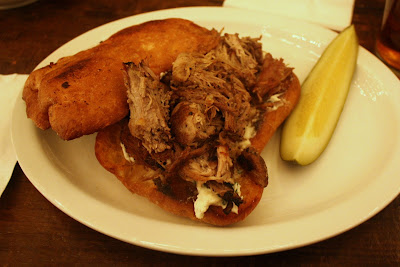 Although ASB is sandwich-centric, the sandwiches stand alone-- if you want a side, you'll have to fork over another $5-6.  Although this pushes your total sandwich+side price to the $15 range, it's worth it- the sides are (mostly) large portions and not just afterthoughts to your main dish- you could easily make a meal out of a couple of these.  The three of us split a bowl of mac n' cheese with tomato and bacon ($6).  Familiar elbow macaroni in a simple cheese sauce is updated with a touch of tomato sauce mixed in (no tomato chunks!) and a hint of bacon. 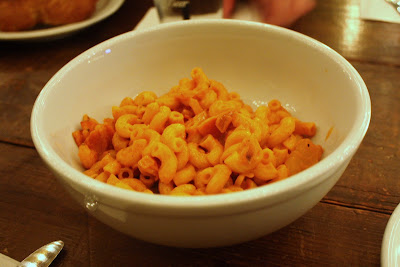 My addition to the table was the Falafel Sandwich ($7), served on a massive piece of fluffy naan (which the waitress wasn't certain was housemade), three massive fried falafel balls, and a pile of veggies.  A tzatziki-like sauce provided a coolness to offset the slightly spicy pickles- my favorite part.  It was almost impossible to eat- way too big to pick up- but I made it work by tearing off pieces of naan and filling it with chunks of falafel and a little pile of veggies, making many mini sandwiches out of the single large one. 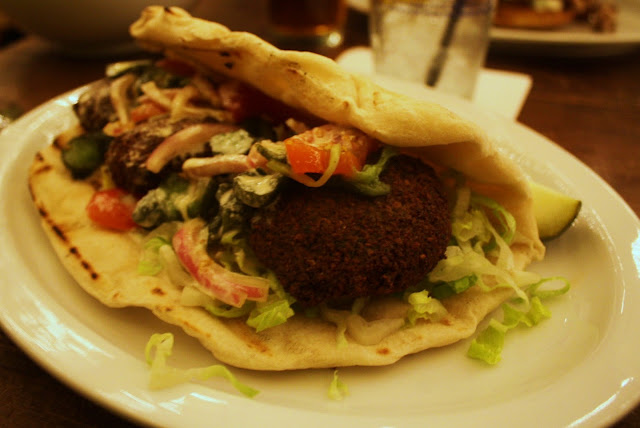 On the side, I ordered an absolute auto-order- roasted Brussels sprouts ($6).  While the portion was a bit measly (I expected maybe twice this amount), the flavor was over-the-top good.  Sliced in half, the mini cabbages were toasted until crispy on the outside and soft on the inside, with a solid amount of oily richness in each bite.  The veggies themselves didn't have a lot of heat, but end up with a tiny piece of chili pepper on your fork and BAM, you're reaching for your water.  In a good way.  While the Brussels don't top those at Varga, they definitely come pretty darn close. 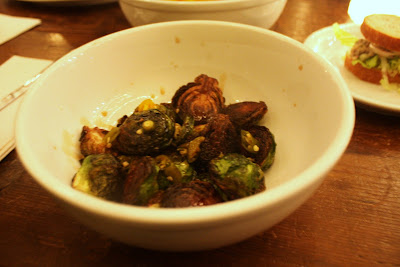 Our final bite of the evening was in reverence to the name of this new spot, the Sardine Sandwich ($2). I was laughing at the tiny price of this dish, but quit laughing when it arrived at the table- it really is small.  The bread is thinly sliced from a narrow baguette, and topped with a pile of shredded lettuce and red onion and a scoop of sardine salad.  If you're wary of sardines, you shouldn't be.  Especially in this rendition, it's particularly reminiscent of canned tuna.  The sandwich is finished with a slice of hard boiled egg (in the back of the picture, and can be used for a size reference!). Tasty, but tiny.  If you're set on the sardines, order three of 'em. 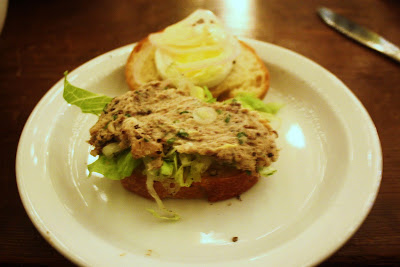 Overall, it was a solid showing of Schroeder's talent in the kitchen.  While the menu is significantly abbreviated compared to SPTR, it's kind of like a fun little brother to the original.  With its more convenient location, we think we'll add this to our go-to list for an inexpensive, quick dinner with friends.  We'd love to see it bring in additional quality restaurants to the area, as it could certainly use a few upgrades.