You've heard it here before- we love barbecue. After many months of planning, A & I finally traveled to one of the BBQ capitals of the world- Memphis, Tennessee.  Though our real reasons for visiting were to see good friends and to run the St. Jude Half Marathon (A's first!), we were also able to experience the highlight of Memphis cuisine.  Everyone has their own opinion about what the true "best" place in Memphis is, but our friends have established a list of their personal favorites. BBQ is always best eaten with a very empty stomach, so we planned our meal to fall after we were finished running.  Unfortunately, this meant skipping out on their favorite- Central BBQ- because of long lines (too hungry to wait!).

The Bar-B-Que Shop was a close second on the list, and with empty tables, a great bet.  We immediately put in an order for a Combo Cheese Plate ($11.95)- not something I would typically order, but I trusted our friends' experienced judgement.  This basket of delight was great for nibbling on while we waited for the main event.  Blocks of creamy cheddar cheese, saltine crackers, and explosively juicy pepperoncini peppers played supporting roles to the meaty stars- barbecued bologna and Polish sausage drenched in sauce.  Barbecued bologna was definitely new to me- thick strips of soft, slightly chewy meat (sort of like a good pork loin) exuded a smoky, slightly sweet-and-salty flavor, with the sauce adding a vinegar-based acidic element.  Well-balanced flavors and with a great texture- impossible not to like.  The sausage had a similar flavor profile, but with a touch of spice, a hint of garlic, and the best part- the addition of a snappy ring of casing wrapped around each fat, dollar-coin-sized slice. 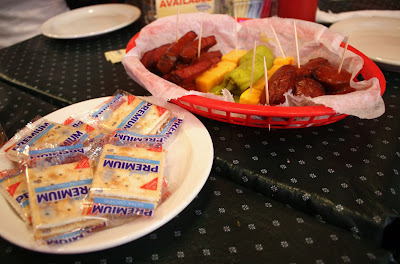 Memphis BBQ is most reknowned for two things: pulled pork and dry-rub ribs.  We got neither.  Oops!  Instead, A ordered the pulled beef sandwich plate, served on Texas toast ($7.50).  Large hunks of slow-cooked brisket smothered in a sweet tomato and vinegar sauce and creamy coleslaw on fluffy thick-cut white bread- how can you go wrong? Extra sauce from a squeeze bottle is available at every table, but A decided to spice it up a bit with their "hot" sauce which was more vinegar and less sweet than the regular, with a great low-burning heat. Coleslaw is served on the side as well, which helps you appreciate its flavor- minimal mayo with the unexpected addition of bits of salty pickle.  The only side that gave this a run for its money were the fries- super crispy with a thin coating of seasoned batter, similar to a Checker's style fry (my closet favorite). 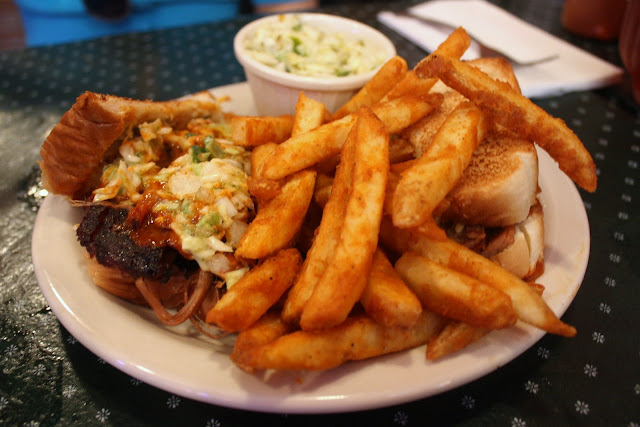 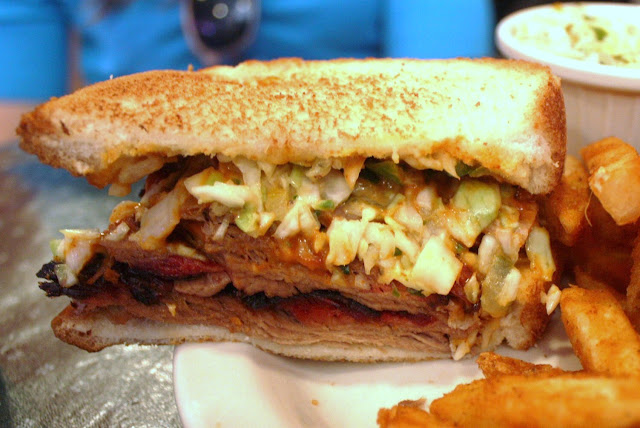 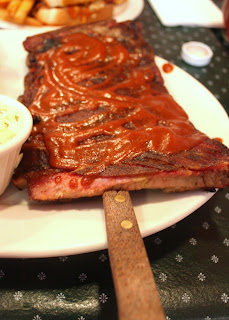 Since everyone else at the table got pulled pork sandwiches, I knew I needed to try something a little different- the BBQ spaghetti was a little TOO different, so I opted for a "Regular Rib Order" ($15.95).  These are served dry or wet, and I like me some sauce, so.. dry it wasn't.  Eight meaty pork ribs came alongside baked beans, slaw, and Texas toast (we've now covered the entire list of available sides).  The ribs still had the coarse pepper-y rub coating their surfaces, which was complimented by a good slather of tangy sauce.  Falling off the bone, the smoky pork meat was dark in color, juicy and rich.  While I've already sung my praises to the coleslaw, the baked beans and toast were nothing special.


I also tasted a bite of the pulled pork sandwich, but with all the fixin's it was hard to say what made it better than others I've tried.  Surprisingly, considering how hungry we were post-race, this was enough food for us to bring home half the meal to eat the next day.  The ribs weren't all that great as leftovers, but I think that is to be expected.  Overall, the down-homey, quiet Bar-B-Que Shop was a great place for us to fill up on great Memphis BBQ.  Of note, our waiter was ah-may-zing... possibly the nicest waiter I've ever had.  He was just so cheerful- and with a heavy dose of Southern hospitality, he had us feeling like royalty.

Next time we'll have to make it to Central BBQ- I hear the BBQ nachos are something special!