This month's Burger Club meeting brought us to the other side of town, a fun little adventure to Fishtown and Frankford Hall.  It takes a lot to get me out on a weeknight, particularly when it requires a long trek, but this meeting was worth it.  If you haven't been yet, Frankford is one of the coolest places to hang out in the city- let alone as a food or drink destination.

A large, airy indoor space complete with foosball and table tennis leads you to an enormous courtyard packed with picnic tables.  In the summer, you've got the occasional umbrella up to block the sun, and in the winter, you've got heater after heater to keep the space temperate.  To order food, just pop on over to the counter outside, place your order, and a waiter will bring your food over as soon as it's ready.

Frankford Hall is styled after the German bierhall, and according to others, is pretty authentic.  The menu reflects lots of German influence, including soft pretzels (one regular size, one twice the size of my face), spatzle, a variety of brats and sausages, and even a liverwurst sandwich.  The burger menu makes its way outside of the German style, lending a short but solid list of options.

The choice that caught my eye was the Atlantic "Lachs" burger, which technically isn't a burger at all, and almost got me kicked out of the club.  A seared salmon patty is full of bits of scallions and onion, and topped with crunchy, vinegary pickled red onion, spicy arugula, and a touch of tartar sauce ($11).  It's also supposed to come with a few slices of avocado, but ours sadly came without. 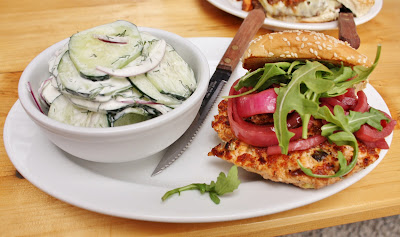 The patty was a little bit dry and rather flavorless, and wasn't saved by the toppings.  I will say that the onion was awesome but overwhelmed the rest of the ingredients.  Definitely not worth almost losing burger privileges! 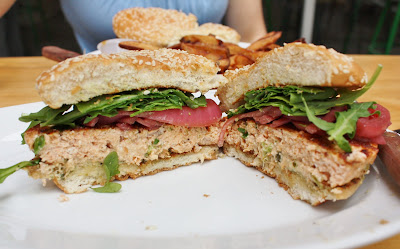 Each of the burgers comes on a small, soft, sesame studded Martin's potato roll, and typically comes served with fries.  However, I felt that the cucumber salad would be a good complement to the salmon, so substituted it in (for no extra charge!).  Definitely the highlight of my meal- I can't decide if this says more about how little I like the burgers or how much I loved this salad.  Thinly sliced cukes are tossed with slivers of red onion, fresh dill, and a delicious sour cream sauce.  The combination is refreshing and really satisfying- and for some odd reason, reminded me of McDonald's secret sauce. 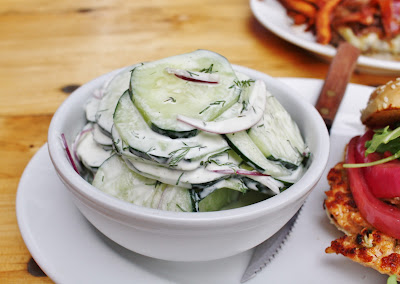 The "big guy" on the burger menu is called the Kanzler, which essentially is the German equivalent of President.  A dry-aged beef patty (about 6 ounces?), grilled bacon (still pondering how you grill bacon), gruyere, and balsamic soaked caramelized onions are all piled onto the Martin's bun ($12).  All the components you might expect for a solid burger, but this isn't worthy of it's title.  Was it bad?  Definitely not.  But it wasn't something we would order again.  The combination of the slightly oversalted meat and the salt content of each of the added toppings left us... thirsty.  The meat was high quality, but overcooked (a request for medium came out well done). 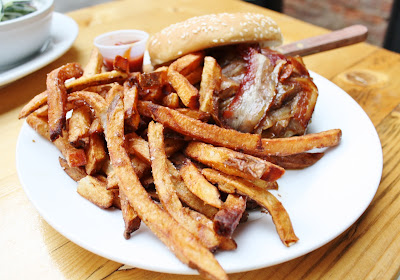 The side of fries was generous, a good sized portion to split.  Long enough to dip into the curry ketchup (apparently a very German thing) but it seems you either like this combination or you don't.  We're still on the fence-- we like ketchup and we like curry, but for some reason the marriage of the two didn't hit the spot the way American ketchup does. 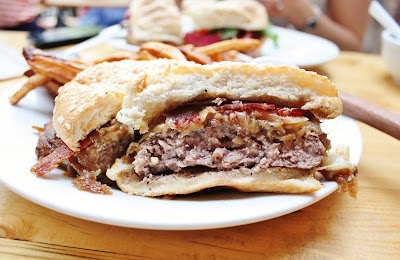 The fun atmosphere at Frankford Hall will forever be calling our name, but next time we stop by I'll be jonesing for some potato pancakes or a brat, not the burger.  We think we might have been forever spoiled by the Supper burger, so perhaps our criticism should be taken with that in mind, but we certainly don't think these were worth the trip.  Thankfully, enjoying the sunshine, seeing friends, and of course, the cucumber salad, were!