I bet no one is surprised that we're writing about Shake Shack.  Between our recent obsession with burgers and the fact that Shake Shack's cult following is just ripe for the blogging... well, it wasn't open long before we made plans to check it out.

Thankfully in the early evening on a Monday, the line was pretty short, barely extending beyond the door.  A friend of ours happened to walk by and hopped right to the front of the "VIP line" as he called it (actually the "C line" available for anyone ordering only custard or other cold items).  We probably waited in the regular line about ten minutes before placing our order. 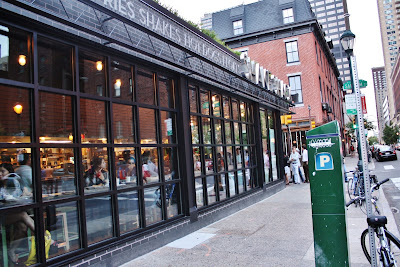 While we snaked through the short line, we checked out the menu taking up up one giant wall of the front of the restaurant. Shake Shack actually keeps it relatively simple- a few burgers, a few dogs, fries, shakes, and custard.  Their most interesting offering is called a "Concrete"- a thick custard with fun and creative mix-in combinations. 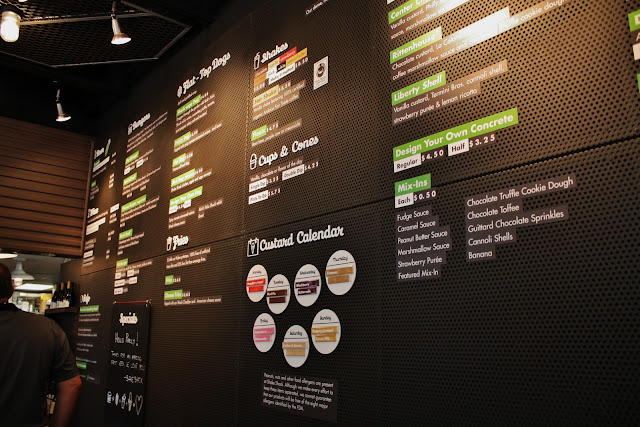 Although Shake Shack is undoubtedly most well known for its original location in New York City, Philly's Shake Shack definitely plays up its newest home with personalized messages, Philly-themed Concretes and even t-shirts (LOVE shirt not shown).  One of the rotating custard flavors is "Coffee and Donuts," made with La Colombe coffee and doughnuts from Federal Donuts.  Please and thank you.

After placing our order, we snagged a table and waited with our Cheesecake Factory-style buzzer.  Unfortunately, cold and hot items are not prepared in the same time frame, meaning our ice cream was pretty soupy by the time the burgers were ready.

We were able to ignore the soup situation and dig right into the piping hot sandwiches.  I ordered the single Shack Burger- a pretty normal rendition of a cheeseburger with the addition of secret Shake sauce ($4.55). 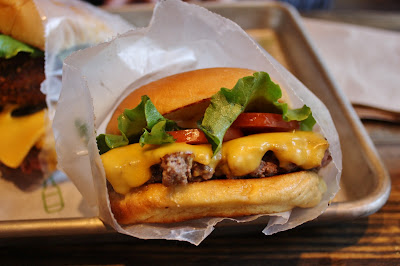 We requested the meat to be cooked rare (options are rare, medium, and well-done with medium being the standard.)  The meat was certainly cooked to order, with a seriously pink center that extended right to the edge of the patty.  The patty itself isn't very big, but it has that quirky handmade shape that peeked out from within the egg-washed bun.  I really loved the flavor of the meat, the Shake sauce (apparently a blend of ketchup, mustard, pickles, and a few spices), and the fresh hit of lettuce and tomato.   This was a solid cheeseburger- a good melty cheese, meat cooked to order, not oversalted- my only real complaint was that I could eat my half in just a few bites. 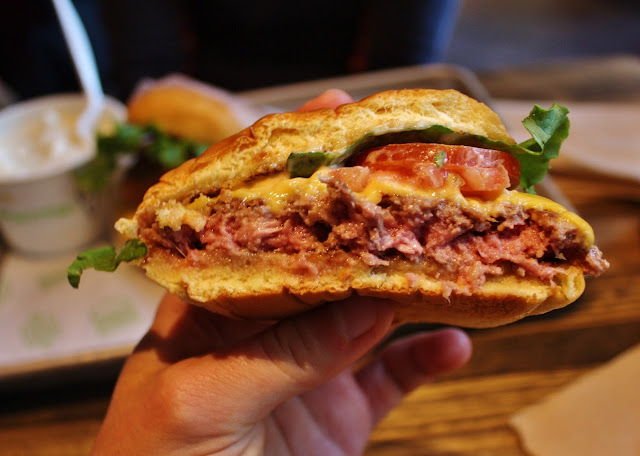 The other burger we tried was the Shake Stack, a Shack Burger with the addition of a cheese-infused deep fried giant portobello mushroom ($8.60).  You can also order a 'Shroom Burger as a vegetarian option, so this is really like two burgers in one. 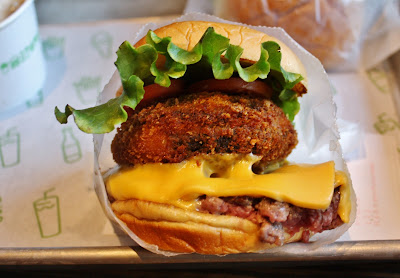 The mushroom is filled with Muenster and cheddar cheese, creating a Giant Cheesy Mess when cut in half.  A little internet detective work suggests that this is actually two mushrooms sandwiching a bunch of cheese, explaining the science behind the GCM.  I actually thought the additional American cheese on the meat was overkill, but the juicy and crunchy portobello(s) added a ton of flavor and texture- our unanimous favorite. 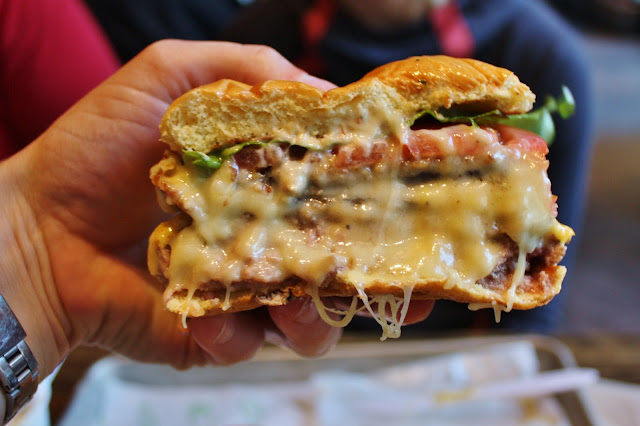 Of course we're huge custard fans (sorry for cheating on you Rita's!) so we ordered a couple of half Concrete's- mostly because we couldn't decide between two of the flavor combinations. The half-serving was the perfect amount for one, but maybe not a great deal at $4.25.

First up was the "Center City Pretzel"- vanilla custard with chunks of soft pretzel, caramel and marshmallow sauces, and bananas.  We loved the vanilla and banana combination but the pretzel chunks were soggy and stale at the same time- it didn't quite work here.  The degree of meltedness probably didn't help, nor did it really seem like the thick custard we're accustomed to- much more like ice cream. 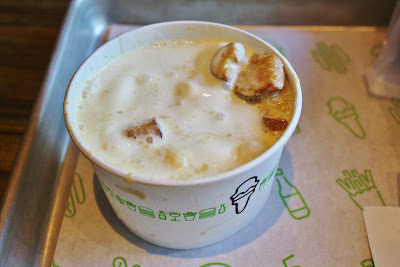 There was no way I was ignoring the Rittenhouse-Squared, a mix of chocolate custard, La Colombe coffee beans, coffee marshmallow sauce (what the...??) and chocolate truffle cookie dough.  Everything about this was fantastic- the coffee flavor really stood out and gave a decent amount of crunch.  The cookie dough was blended in pretty well- a few chunks would have been nice- but it gave it an extra dimension of chocolate-y richness. 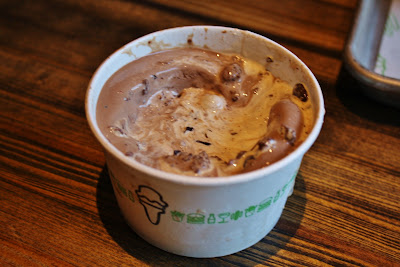 We ate with a few burger connoisseur friends, and the general consensus was that Shake Shack is a bit overrated.  I'm not sure how a place with so much hype behind it could possibly NOT be overrated, but I personally felt that I got a solid meal for a decent price.  Had I waited more than a half hour, I might not feel the same way.  There was some comparison with other fast-food burger options (primarily Five Guys) which has some legitimacy.  However, the quality of the meat and the ability to order a cooking temperature makes a significant difference in my eyes.  If the line isn't out the door, I'd hop back in it anytime!