There's nothing that says summertime quite like catching a Phillies game at Citizens Bank Park.  I was lucky enough to fill in for A's fiance and watch Halladay get injured pitch against the Nationals last week.  Even though we didn't win, it was an exciting game- getting to know some of the new guys (loved the Kratz home run!) and seeing Chooch get ejected. 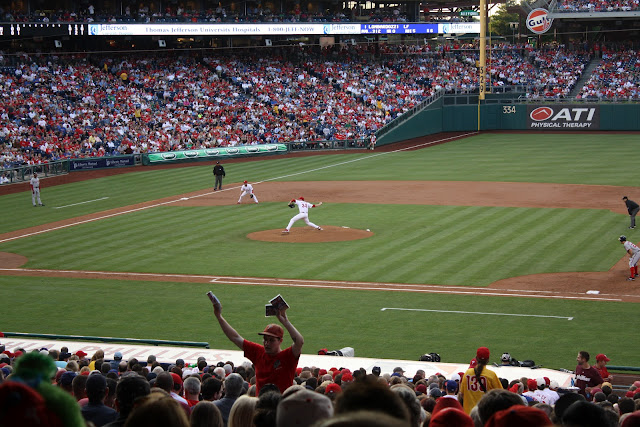 Even though it was Dollar Dog Night (gag), CBP is actually quite well-known for their array of ballpark food, rating at or near the top of many a ranking.  There are sit-down options, enormous sandwiches, plenty of vegetarian offerings, and of course all the staples- hot dogs, peanuts, and pretzels.

We made it to the game with time to peruse some of the options, purchase some dinner, and snag some standing room only space along the first base line all before the first pitch.  We usually enter the ballpark at the Third Base Gate, and one of the first food carts to appear is the Panini's stand right outside gate 133. 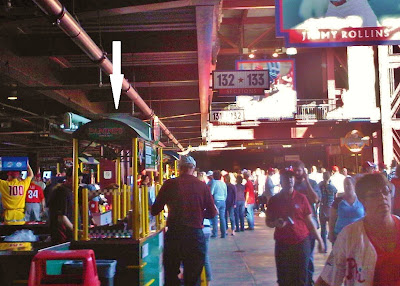 The options here are pretty slim- either chicken pesto or an "Italian Market" panini, each for $10.  I couldn't turn down capicola and pepperoncinis, so I went with the latter.  The bored looking guy manning the stand handed me a pre-made, foil wrapped brick from a warming drawer- for ten bucks, you sure get a weighty sandwich. 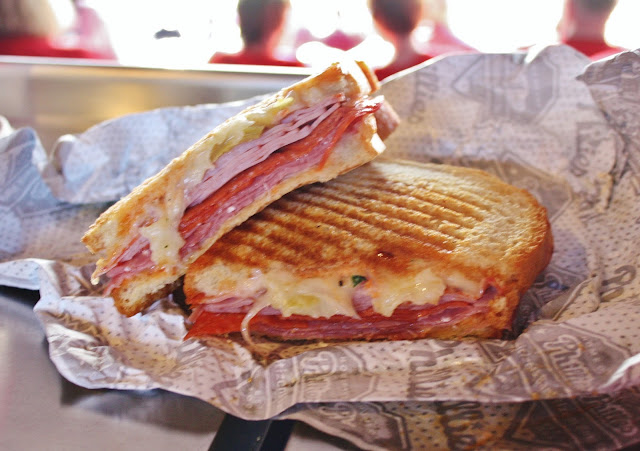 The bread actually maintains a good amount of crispiness from its perhaps-long-ago rendezvous with the panini press.  Layers of capicola, pepperoni, and Genoa salami are smothered in melted provolone with a bit of red onion and tomato to accompany all that meat and cheese.  There was plenty going on in this sandwich to make it interesting, but it was a little too intense (and heavy..) for me to consider eating the whole thing.  However, this would be a great option for a meat-loving dude- and certainly a good value as ballpark food goes. 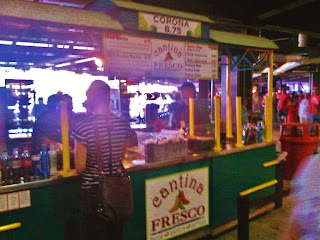 Right around the corner, on the other side of home plate near section 122, is another crazy good deal.  For $8.75, Cantina Fresco sells a hefty serving of BBQ nachos (shredded chicken or pork).  You can also get vegetarian Ancho Chile Nachos and several types of tacos.  There are tons of topping options for the nachos as well- these aren't just chips and cheese!


A went all-in with the toppings- tomatoes, salsa, black beans, a thin guacamole, extra pickled jalapenos, and shredded cheddar, followed by an unfortunate dousing of nacho cheese around the rim of the bowl.  Between the shredded BBQ-sauce soaked pork, the pile of toppings, and the pound of gooey cheese, this could serve as a hearty snack for a four-person family. 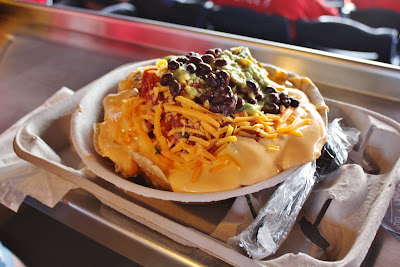 However, it also serves just as well for a dinner, especially after most of the nacho cheese has been removed.  The BBQ pork has a sweet sauce- I'd prefer spicy with a bit more vinegar- but these are easily the most serious nachos I've ever eaten.  Don't forget a fork- the weight and juiciness of the meat turns the bottom layer into somewhat of a chip graveyard, but it's still plenty tasty. 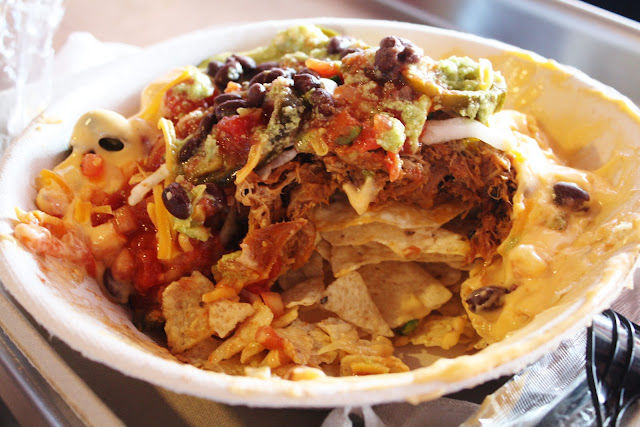 After several innings of cheering, we wandered over to "Dessert Alley," the unofficial name for the sugary area of sweets and treats near Section 140 (right next to the Left Field Gate). The options are spread over three purveyors- the funnel cake stand, Turkey Hill Ice Cream (which also sells Gina's cupcakes and bags of mini-donuts), and a burger stand that also does milkshakes and ice cream sundaes. 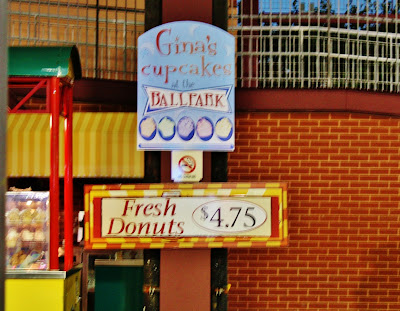 We opted to split some ice cream in it's most fun mode of delivery- the helmet cup.  For $6 you get a mini red plastic Phillies helmet packed with your choice of ice cream flavor.  Other flavor options are offered in a full pint for a quarter more. 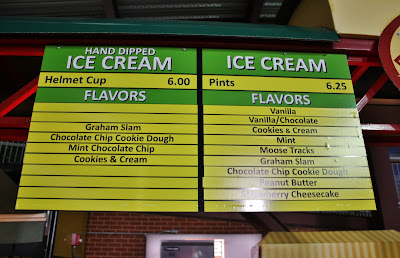 While we waited in line, I checked out Gina's cupcakes- next time I need to try the cannoli flavored cake, topped with crumbled pastry, chocolate chips, and powdered sugar.  For less than $5, you can also get a bag filled with mini cinnamon & sugar donuts- another great option for a family. 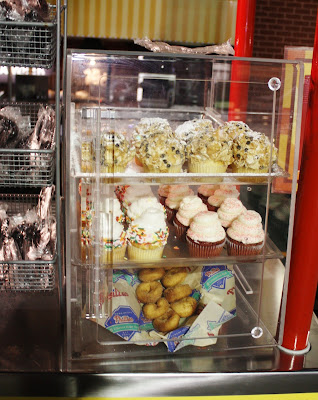 We decided to try the cookies & cream- a vanilla based ice cream blended with chocolate wafer cookies (dare I say Oreos?).  I'm not sure I've ever had Turkey Hill, but we were very impressed with the quality.  Extremely light, easily scoopable, with an almost fluffy texture and of course plenty of frozen, creamy sweetness.  It took us the better part of the 8th inning to get through this! 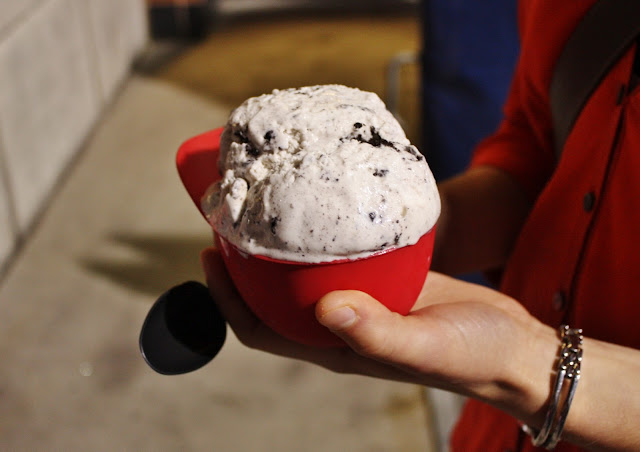 We've always been a little hesitant to eat at the ballpark, preferring to eat at home before the game or just pack some snacks (I do need to remember the sunflower seeds for next time!).  However, our venture through a miniscule portion of the offerings at CBP have us excited to go back and check out even more.  It was surprisingly affordable and far exceeded our typical expectations of ballpark food.  Go Phillies!