One of the best parts of food blogging is getting to know other food bloggers- it's always fun to find people who share a common interest, and better yet, one that's easy to come together as strangers and meet over.  We recently attended an event featuring Michael Natkin, food blogger and newly published cookbook author, to meet and mingle with other local food bloggers (and Michael himself!).  The center of the event was his new book, titled after his blog, Herbivoracious.  The event was held in a meeting space at R2L, which neither of us have ever been to.  Needless to say, we were in total awe of the views from the 37th floor of Two Liberty Place. 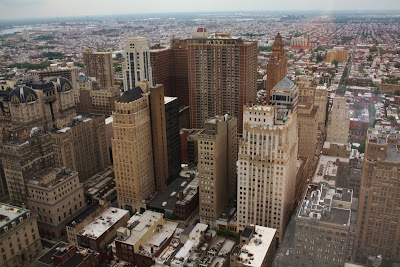 The event was very laidback, with no real structure- just come, eat and drink, meet Michael, and enjoy yourself.  As the book features vegetarian dishes, we were treated to a number of R2L's renditions of veggie based appetizers- some of which are on their regular menu.  We noticed they have a fondness for truffles and blue cheese, both of which are fine by us.  The servers were kind enough to allow us to photo some of the passed trays- kind of necessary in a room full of bloggers!

Our favorite of the night (and it seemed the whole room's favorite as well!) was the Crisp Risotto Arancini with Truffle Sauce- a smooth interior of melted rice surrounded by a crisp fried shell, well complemented by the rich truffle flavor.  These little guys are only available on the Happy Hour menu, which we suggest trying out for a less expensive way to enjoy the views and some good eats.

Beyond the food, meeting Michael- who is extremely down to earth and easily approachable- as well as making some new blogger friends made the night a success.  We also walked away with a copy of Michael's new book, which was beautifully displayed alongside samples of one of the featured recipes.

The Grapefruit Crudo was a small bite that had huge flavor- bittersweet grapefruit paired with creamy avocado, salty capers, and a splash of olive oil.  I thought this was a perfect example of most of the recipes in the book.  While there are some simple, classic recipes, the majority of them take a unique approach to food- pairing and grouping foods in ways I would have never imagined.  He also spans a wide range of cuisines, making even some of the most foreign cooking styles and ingredients seem remarkably doable. 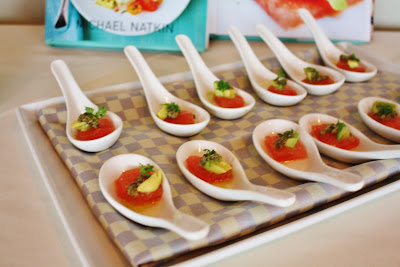 While flipping through the book, it was hard to pick out a SINGLE recipe that I wanted to make-- eventually I plan to cook my way through many of the options.  However, one recipe that I kept coming back to was the "Loaded Otsu Noodles."  I don't even know what Otsu means (a quick Google search tells me it's Japanese for "strange, quaint, or stylish") but the mix of ingredients in this recipe had me craving the flavors.

The recipe is a bit of a riff on the classic Asian-inspired "soba noodles in peanut sauce" (does this dish have a real name?).  However, Michael bulks it up by adding in chunks of crispy tofu, as well as giving an extra spike of both flavor and nutrients with eggplant and cucumber.  While the ingredients list is a bit long, and the instructions lengthy, this dish was worth the extra few steps necessary.  Overall, the recipe probably only takes about 45 minutes to come together.

For me, Step #1 was to get the eggplant in the oven.  I chose to broil, although the author also suggests using a grill pan.  Slice, coat with olive oil, and broil for about five minutes before flipping and repeating.  The broiling gives an extra dimension of flavor relative to a simple roast, as it adds a bit of a char.

It's also suggested that the sauce (Step #2!) be made ahead of time to allow for maximal flavor depth.  It calls for a tahini base, but I threw some peanut butter in as well, since I really wanted these noodles to be extra nutty.  The recipe calls for a few ingredients I didn't have on hand-- including a sweet soy sauce and a specific chili pepper.  However, several possible substitutions are provided which worked just fine!  I love a cook that is sympathetic towards a poorly stocked kitchen.

Onto mini-project #3: prepping the tofu.  I chose to use a SUPER firm (yep, that's what it was labelled as!) block of sprouted tofu, which worked beautifully.  The chunks of tofu should end up crisp (not falling apart), and a softer tofu wouldn't have been able to stand up to the job.  A little look into my favorite method of prepping the soy stuff: slice into 1/2-3/4" slices, lay on a clean, absorbent, low-lint (very important) towel, fold over and lightly press down for about a minute.

These slices of tofu were then pan fried in a generous amount of sesame oil.  Just leave them be in the pan for about five minutes per side- the crispier the better.  It's actually difficult to overcook it, in my experience. 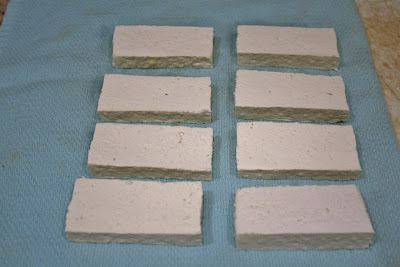 Steps #4 include boiling the soba noodles- we used Japanese somen instead, which gave a bit of a different taste AND texture, as somen is a thinner noodle made of wheat as compared to the nuttier thicker buckwheat soba.  Next time, I'll use whole wheat spaghetti as a better substitute if I can't find soba.

Step #5? Chop an English cucumber and some green onions.  Then, the whole dish began to come together-- draining the noodles and tossing them with the sauce, the roughly chopped eggplant, the cucumber, and the tofu (also diced into 1" pieces).  The recipe also includes a sprinkle of sesame seeds but I substituted sunflower seeds for that necessary crunch.

Served in a wide, shallow bowl over some crisp iceberg lettuce, this dish is best at either room temperature or right out of the refrigerator.  The noodles soaked up the sauce, giving them plenty of nutty flavor.  The cool cucumbers balanced out the bit of heat from the sriracha (a little extra drizzle doesn't hurt!).  Leftovers the next day were even better! 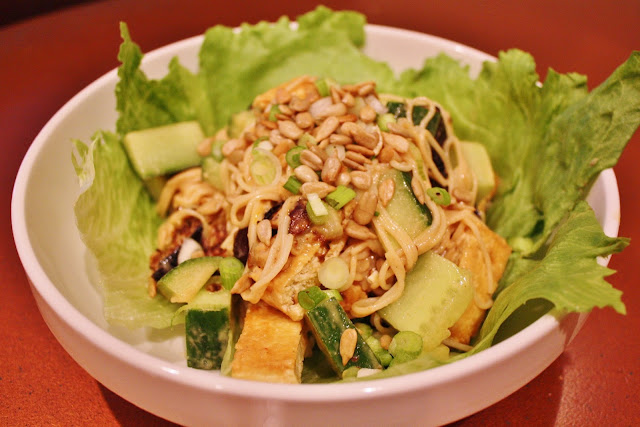 Even though I didn't follow the recipe exactly, I think the dish came out as Michael intended- a hearty vegetarian dish bursting with flavor and fun.  While I hesitate to say the cookbook would be a good buy for a real meat-and-potatoes family, it's perfect for an adventurous amateur cook open to adding more veggie meals into the rotation. 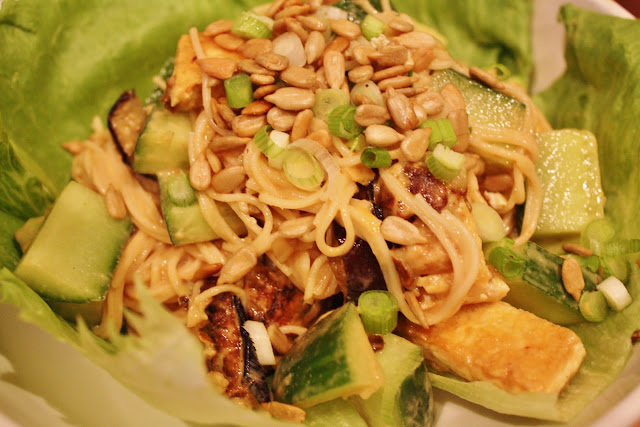 Thanks to Michael and his team for a great event, a great book, and many great meals to come!
Posted by A and J at 8:13 AM