Several of my friends are minorly obsessed with Matt Levin- and for good reason.  His Wikipedia page describes him as an "American celebrity chef," which I find rather amusing, but it's a telling statement  (I also learned he went to college on a lacrosse scholarship..).  It seems as if everything he touches turns to gold-- from his days at Lacroix, to the eventual opening of his first solo spot, Adsum.  Although Adsum had some great reviews and seemed to be consistently busy, it eventually gave way, and Levin floated around before joining forces with the Cuba Libre crew to open Square Peg.

Located in the old Marathon at 10th and Walnut, it's an enormous space-- a bit ambitious, in my opinion.  The decor is odd-- a lot of exposed brick leftover from the Marathon space, with the addition of enormous canvas pictures.  Not sure whether these pictures are supposed to be a riff on "real" art, but they are strange in a distracting way.

The hostess and waitress were good natured about our group of six's staggered arrival, and the service was relatively consistent throughout our meal.  A few requests about the source of some of the meat products on the menu had our waitress fumbling around, but eventually we got some satisfactory information.  The menu is full of creative riffs on classic American eats- with a good emphasis on the fun-but-not-so-healthy.  This isn't a farm-to-table bistro or a well-balanced menu, but a no apologies assortment of foods you won't find anywhere else- hence the name of the restaurant?

Our group ordered an assortment of appetizers to begin, starting with the White Chocolate-Habanero Chicken Wings ($11).  For a plate full of chicken, I wondered about the price point on this- which would be a continuing theme throughout the dinner.  You might be ordering foods that seem inexpensive, but expect to pay a hefty price for Levin's magic touch.  The wings were sticky and crispy on the outside, but a little dry on the inside.  The white chocolate plays a starring role, making these quite sweet, with a hint of heat from the habanero.  A creamy blue cheese dip didn't seem like a good match and went untouched. 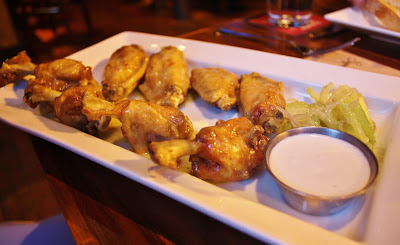 Under my influence, the table did order a dish to share.  From the "All Day Breakfast" menu, the Breakfast Poutine came highly recommended from Twitter friends who had previously dined here.  And allow me to pass this recommendation on to you, friends, as it is a bowl full of decadent deliciousness.  Don't think about any potential health hazards, just enjoy. The pile of crispy yet soft skin-on fries has a thick layer of salty sausage gravy, chunks of bacon and squeaky cheese, and two perfectly cooked sunny-side-up fried eggs ($13.50).  Again, a ridiculous price for inexpensive ingredients, but just do it-- especially as a shared appetizer, it's worth it.  The sausage gravy is crazy good, and letting those egg yolks run over the whole mess takes it to the next level- a level I didn't even know existed. 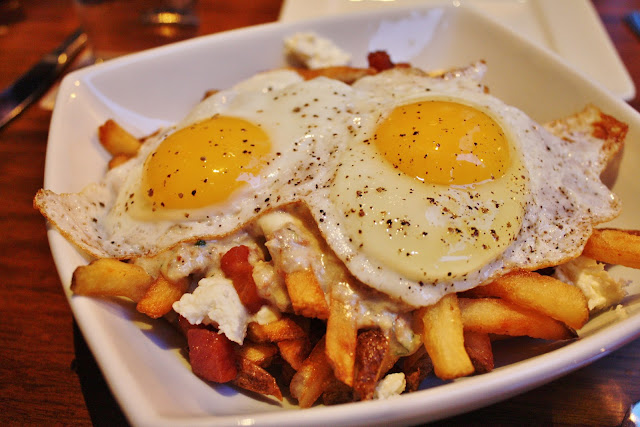 Since we were dining with a larger group, many dishes managed to hit our table, most of which I didn't personally try.  However, it was fun just to see them arrive and hear general comments, both praise and criticism for what Levin is trying to do.  First up: the Monday night special (there's one dinner special each night of the week), the Homemade Pierogies ($14).  The runner brought these to the table with the announcement that they are "the best pierogies your mother never made," which was quite a statement.  Stuffed with creamy potatoes, the crispy, fried outer pasta-like shells formed a good textural contrast.  A sprinkle of fried onions and bits of crisp bacon brought some additional flavor components, getting this dish great reviews. 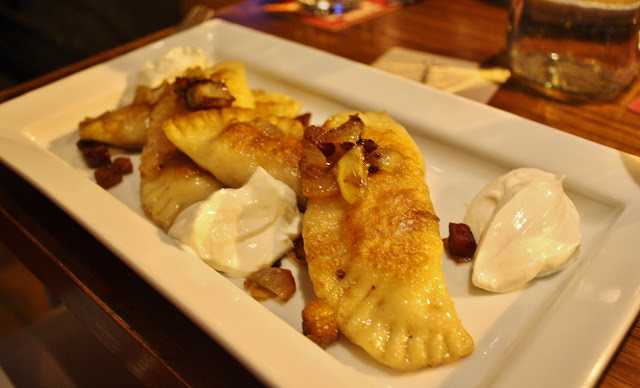 Next up were a few dishes that seemed relatively uninspired compared to the rest of the menu, but I suppose Levin had to throw a few "regulars" in there to please the masses.  The Hanger Steak is served as a long strip of well-cooked beef, with sides of heavily creamed spinach (I think that's a 6:1 ratio of cream to spinach..) as well as a pile of the same fries used in the poutine ($23).  A huge pat of bacon butter will appeal to every diner with a Y chromosome, but was less exciting than it sounds. 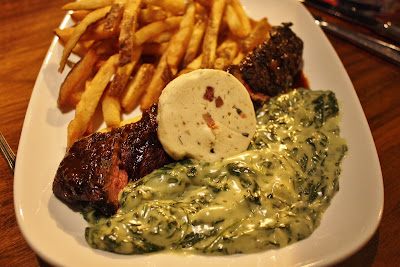 The burger is another fairly normal dish- served with sharp white cheddar, pancetta, roasted onions (ours was ordered without), and the usual lettuce and tomato, you've pretty much got yourself a regular cheeseburger for a few more dollars than you'd spend elsewhere ($16).  Solid, but nothing to write home about.  And when there is LOTS to write home about here, just skip it. 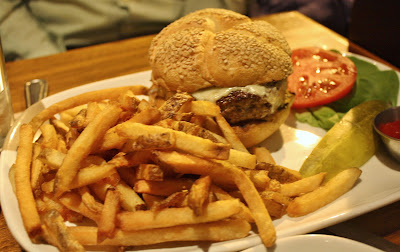 Another tablemate ordered the dish I was eyeing up, giving me a major case of food envy once it arrived-- the Crispy Red Fish Sandwich looked phenomenal ($15). 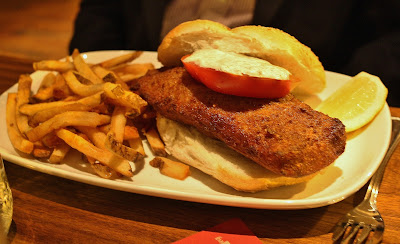 A huge chunk of redfish is coated with a thin layer of breadcrumbs, fried, and served on a long roll with thick slices of heirloom tomato and Green Goddess (avocado based?) dressing.  Again, not terribly different, but all components that I could certainly get behind.

Another dish I was eyeing was the Fried Chicken Tacos ($8.50).  Technically an appetizer, in conjunction with another small app or a side it could certainly work as a full meal.  These tacos are a bit ballsy- chunks of fried chicken are coated in a black pepper caramel sauce and served with an oddly aromatic coleslaw.  Papery flour tortillas were substantial enough to hold everything together, but the overall flavor of these was... confusing.  The sticky, spicy chicken was good on its own, as was the vinegary slaw, but together, the flavors clashed instead of complemented. 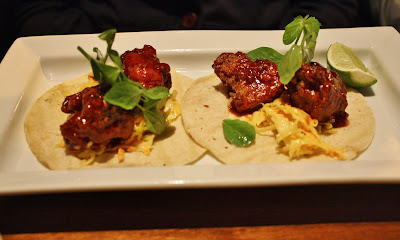 Another highly anticipated dish (based on recommendations) was the Mac n' Cheese "Grilled Cheese."  Three small sandwiches (3/4 of a regular sandwich total) consist of toasted white bread encasing an inner filling of creamy mac n' cheese ($9).  A brilliant idea!  Served with a side of tomato soup for dunking, this seems like the ultimate childhood comfort food mash-up.  However, it didn't meet expectations- the mac n' cheese was dull and the bread a bit too soft.  Great concept though- perhaps we just had a bad batch? 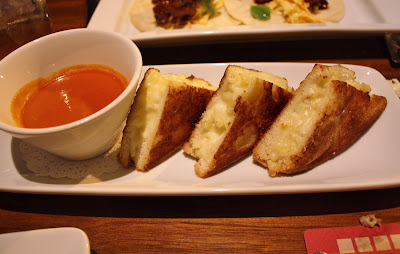 Ordering somewhat against my will, I decided to follow yet another recommendation and try the Cheesesteak Pot Pie ($16).  Described on the menu as "The name says it all"- unfortunately, this isn't quite the case.  As soon as the waitress mentioned that there are onions, peppers, and mushrooms in the dish, the other interested parties backed out, leaving me alone to sample the goods.  While there is a much more beautiful picture on Square Peg's website, the basic principle is a bowl of cheesesteak innards topped with a crispy puff pastry hat. 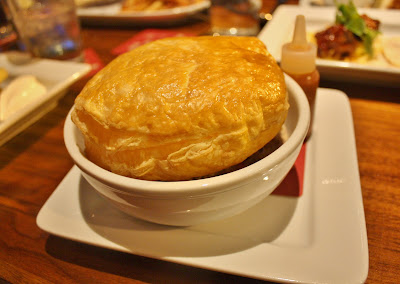 Once you pull the pastry away, the bowl is a bit unappetizing to look at- a mix of shaved ribeye, chopped onions, red peppers, and sauteed mushrooms in a thin cheesy soup.  If this mix was actually served on a roll, I think I'd like it better- I had a really hard time combining the pastry with the meat mix.  As soon as you touch the pastry, it crumbles everywhere, and good luck trying to rip a piece off- it turns to pastry dust and sprinkles over the table.  It's fun to look at, and conceptually solid, but if you're going to make a cheesesteak pot pie, I'd much prefer a typical piecrust pastry encasing the goods. 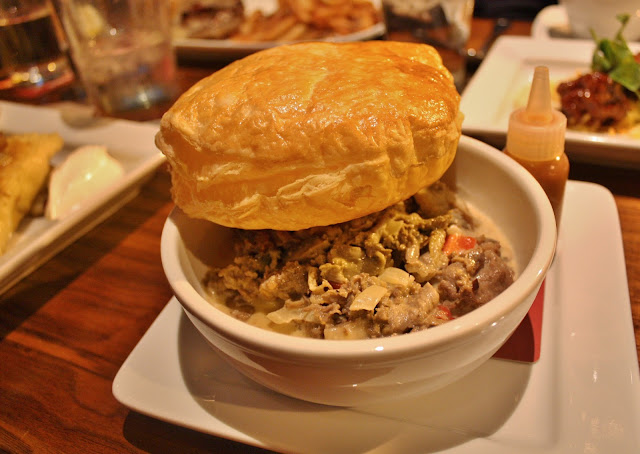 The small bottle of sauce accompanying is NOT ketchup, as I was warned by the waitress, but is actually a sriracha-based hot sauce.  Considering my love for sriracha, you can bet I was excited, but it didn't seem like a good flavor match for the pot pie.  Instead, I used it to coat my small side of boiled collards ($5).  I sample collards whenever I can, so they really need to "Wow!" me to become memorable.  These didn't.  Simple, solid, but nothing I couldn't make myself. 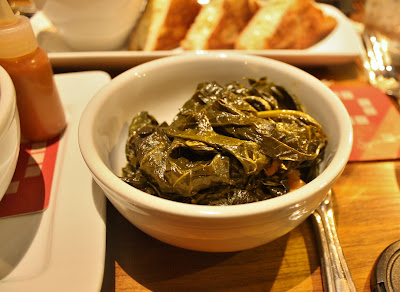 The dessert menu at Square Peg is just as fun and playful as the dinner menu, forcing us to order a few to try.  The Carrot Cake Sundae ($7) sounds like a match made in heaven- however, we probably should have read the description a bit more carefully.  Cream cheese icing ice cream, carrot caramel, and candied walnuts were all well-made and delicious on their own (and even in combination!).  However, we were all expecting maybe even just a few sprinkles of cake itself, which sadly did not exist.  Cream cheese icing ice cream though... has Ben and Jerry's come up with that yet?? 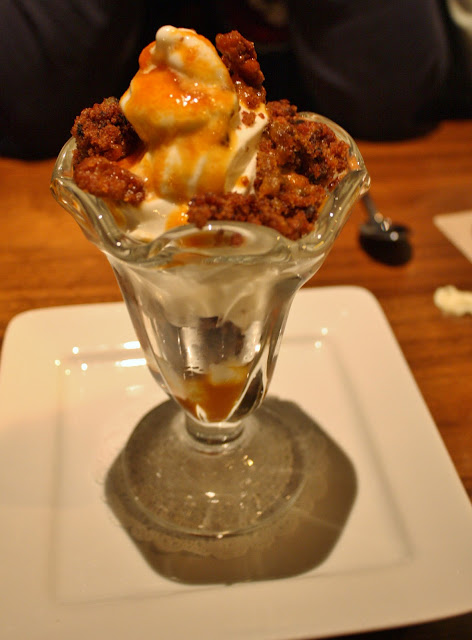 We also sampled the Chocolate Pudding Pie, which is my new favorite dessert (sorry no pictures!).  Not pudding or pie in any sense, but a dense layer of dark chocolate with a bottom layer of crushed pretzels and a sprinkle of salt made this a perfect salty-sweet ending to the meal.  Well caramelized banana slices are a fun but almost unnecessary topping.

Our meal in total took over 2.5 hours-- of which I typically wouldn't complain.  I LOVE long meals spent with friends, but as we began the meal fairly late on a weeknight, we were all itching to get home.  The interlude between appetizers and our main dishes was far too long, particularly as the restaurant was beginning to empty out at that point.  By the time we left, we were one of the very last groups, and even the bartender seemed to be closing down shop.  We all agreed the menu was fun, and the meal enjoyable, but the prices steep even considering the "celebrity chef" and the Center City locale.  I would return, but only for a few carefully selected dishes (that fish sandwich...).  At least here's to hoping Levin can stay grounded in one place for more than a season or two.