It's not a secret that we have a slight serious food crush on Peter McAndrews.  We've eaten his ridiculous sandwiches at both Paesano's, tested the Italian cuisine at Modo Mio, and even gotten up close and personal with the chef himself (and his outrageous personality) at COOK.  While we were at COOK, he talked briefly about his soon-to-be-opened restaurant, Popolino, located a few blocks west of Northern Liberties.  It went directly onto our mental list of restaurants to check out. 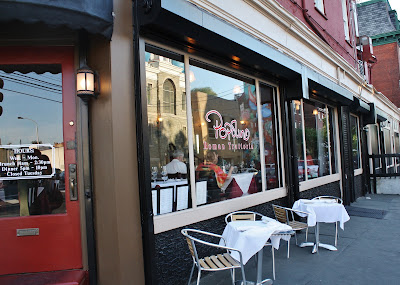 Unfortunately, Popolino (which means "the common people") has gotten some bad press, including a somewhat scathing review from City Paper's Adam Erace.  He did note that the very recent change in kitchen staff might make a difference- and if our experience was any reflection of that change, his prediction is more than accurate.

The space is on the smaller side, but open and bright, complete with tiled floors and Roman-inspired decor.  Our waiter, Scott, was incredibly helpful throughout the meal- we could not have asked for more personalized service.  As we settled in and perused the menu, he brought out a little bite to jump start our palates- thinly sliced pieces of toast topped with a slightly sweet compilation of balsamic-glazed onions, peppers, and golden raisins as well as a salty bit of cheese (feta?).  Simple, yet fun and flavorful. 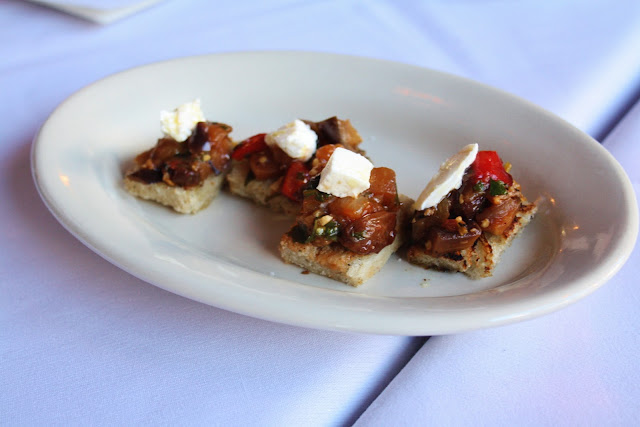 The menu is full of Roman-inspired dishes- Peter initially wanted to incorporate plenty of offal, but apparently the commoners weren't too pleased. The most affordable way to eat is to opt for the Menu Turista- if you've eaten at Modo Mio, you're familiar with this.  For $40, you can pick one choice from each section of the menu.  We all decided to go this route, with our perpetually hungry friend ordering a few extra dishes on the side. 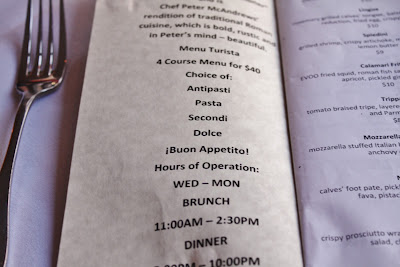 A fun list of appetizers include the option of ordering a mix of room-temp antipasti from the "Tavola Calda"(which for some reason translates to hot table, not cold table as I imagined it might..). The Tavola Calda takes up a pretty extensive amount of space in the center of the dining room.  Ten vegetable dishes, a few olive choices, and a block of proscuitto are up for grabs, though your waiter will make up the plate for you (with your input, of course). 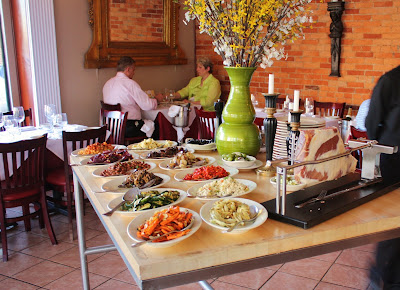 We placed our order (including one plate from the Tavola) and then received the bread service- a wedge cut from an extremely dense, well-crusted housemade loaf with a nutty aftertaste.  A bowl of buttery olive oil is lined with garlic puree, easily coating bits of bread. 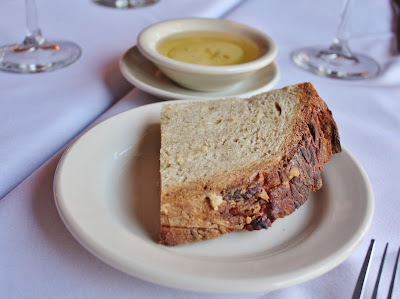 Our table shared almost all of our dishes, which is always fun- we got to try so many different things, but to simplify I'll just discuss the plates A & I ordered.  We started out the sharing with A's Tavola plate- her only specific request was for the carrots, which were cut into star shapes and lightly marinated, turning the crunchy vegetable a bit soft.  A few toasted slices of almonds added back some texture.  I ate more than my share of the olives- the green was crisp and meaty while the black were pickled a bit longer and therefore less astringent.  Skinny strips of sweet and sour red pepper were our least favorite, primarily because the complexity of them contradicted the simple, bright flavors of the other vegetables. 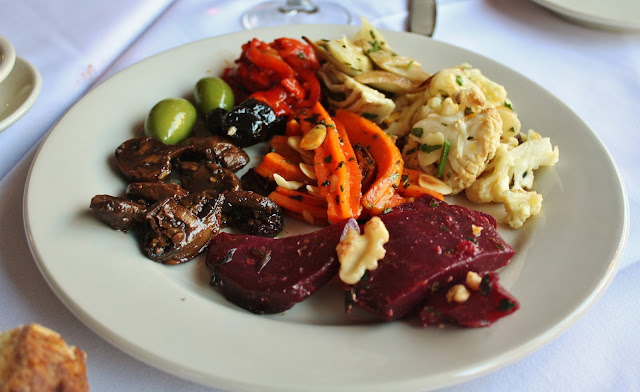 My antipasti choice was one of my favorite dishes of the night- the Nervetti, a crispy fried slice of calves' foot pate.  Creamy on the inside- the standard texture of a well-sieved pate.  The flavor was lighter than I was expecting, obviously much less metallic than the usual liver-based pate.  An interesting assortment of toppings made each bite a bit different- pistachios, fava beans, sliced olives, baby raddichio and a dollop of a fruity jam (unfortunately without a flavor I could identify).  Everything about this dish was playful, with the fried pate grounding the other flavors with its richness. 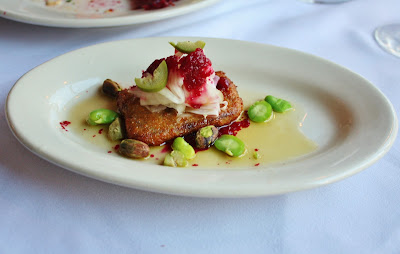 Though I didn't try it, I loved the idea behind the Lingua- a slice of grilled calves' tongue served atop thinly sliced fries and topped with a fried egg.  Reminiscent of a certain breakfast poutine, McAndrews is taking an unusual cut of meat and making it extremely approachable. 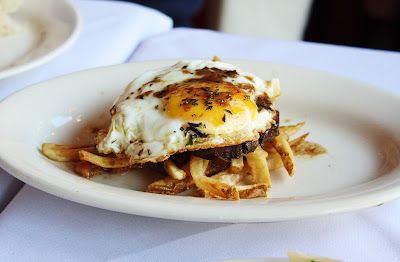 The pasta dishes are also quite inventive, straying from traditional flavor profiles.  However, I chose one of the simplest- the Bucatini all'Amatriciana, a hollow spaghetti tossed in a surprisingly spicy tomato sauce intensified by bits of salty guanciale. I always love the springy bite of bucatini, and these sauce-slicked noodles were no exception.  Shaved pecorino cheese softened the acidity of the tomatoes, but the sauce was intense.  No surprise- A loved it. 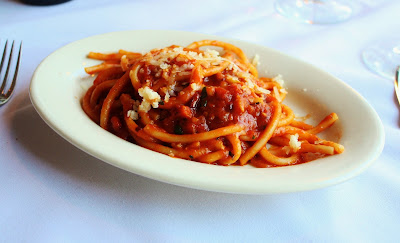 A ordered the canneloni, paper thin rolls of pasta stuffed with veal and nestled into a sweet, cocoa-tinted tomato sauce accented with extra juicy raisins- a Roman twist on a mole?  Perhaps with a bit of cinnamon?  Completely unique. 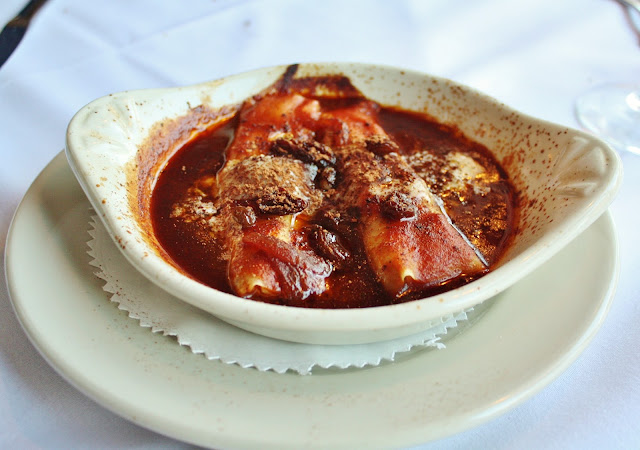 Unfortunately, the gnocchi di castagne was quite disappointing- the tiny fluffy pillows of chestnut and riccota gnocchi had little to no flavor.  However, one of the specials of the evening- hand-folded pockets of pasta stuffed with creamy sweetbreads and peas- redefined delicious.

The secondi course reads like a list of proteins, and each plate was relatively unadorned- don't expect "sides" to come with your meat.  I chose the grilled rib-eye, the one dish that I thought came out a tad too salty (a common complaint on Yelp).  The caper-based sauce contributed to this dilemma, but the meat itself was well-prepared- tender and juicy with plenty of flavor, the way a ribeye should be. 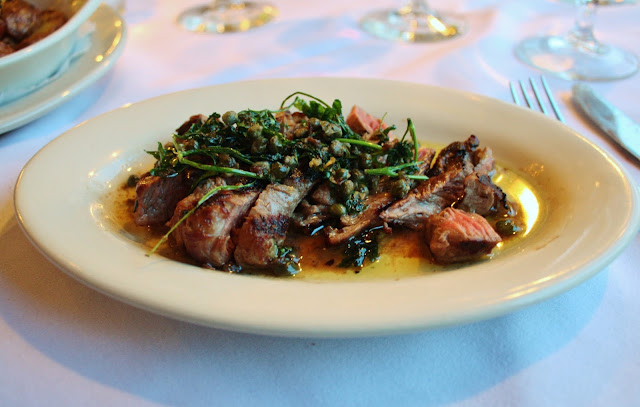 While we were starting in on our dishes, a server came by with a couple of "freebies" from the kitchen.  Apparently if you break out a few cameras and talk about little else but the food, the staff takes you somewhat seriously.  These herb and butter rubbed roasted potatoes were a great starchy compliment to my ribeye. 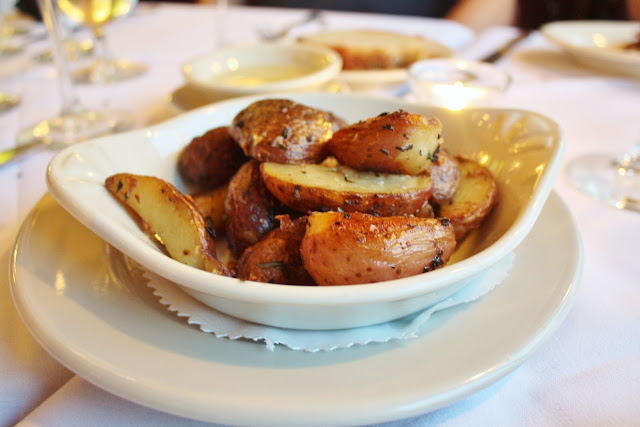 A chose something a bit lighter- the seared bass.  Flaky chunks of the white fish paired well with a topping of lightly dressed fennel and raddichio and a drizzle of oil and pesto.  Indicative of Popolino's new menu for the spring/summer months- almost everything has changed from the current menu posted online. 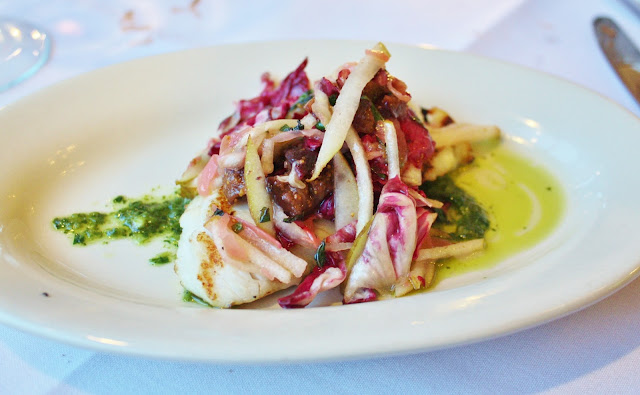 A surprise Rocket salad also made its way to our table- a pile of arugula lightly coated in a bit of olive oil and lemon juice and dusted with shaved Parmesan.  Nothing you couldn't make at home, but a nice accessory hit of greens. 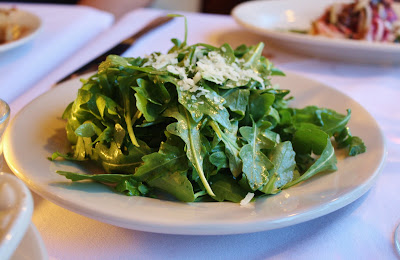 Scott recited the dessert menu for us- a short list of Italian staples.  I claimed the panna cotta for myself, which was served with a macerated strawberry topping.  A thick, creamy pudding with a bit of summer fruit? Don't mind if I do.  Not particularly inspired, but a nice sweet end to the meal. 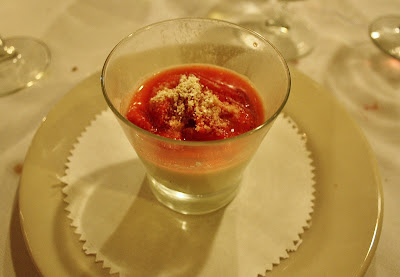 A chose the budino- a cappucino flavored pudding topped with a puddle of whipped cream and a few blueberries.  I can't help but compare every budino to Barbuzzo's infamous salted caramel version.. and obviously this one wasn't even in the same ballpark.  However, it was a decent replacement for an after-dinner cappucino. 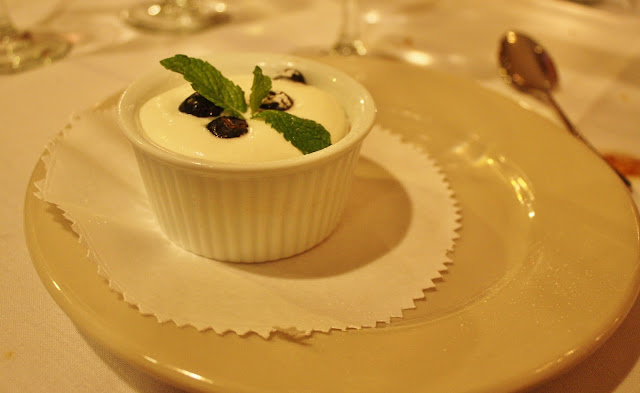 As I stated at the beginning of this post (long, long ago if you've made it this far...), our experience seemed to be the polar opposite of the "sweaty chaos" endured by Erace.  The service was spectacular (thanks again, Scott!), and almost every dish passed around the table received words of praise.  I can't comment on the authenticity of the "Roman trattoria," but to us, it was clearly another success to add to McAndrew's expanding empire.

Popolino
501 Fairmount Avenue
BYOB and cash only
Posted by A and J at 4:11 PM