We very rarely buy ice cream to have around the house.  With a Rita's right down the street, and the #1 Place to Eat Ice Cream in the WORLD around the corner, why would we buy the grocery store kind?  However, we were recently offered the chance to try Graeter's, an ice cream company based out of Ohio.  With a long history (founded in the mid-1800's), this place has developed a faithful following.  Our media rep informed us that Oprah Winfrey gets the stuff shipped to her no matter where she is, and they have the magazine mention to back it up.  At $70 to ship six pints, you really gotta love this stuff to pay the price.

So why were we offered the chance to try it ourselves?  Good news for us Philly folks- Graeter's has worked out a deal to sell their goods at local Weis'.  I'm already on the hunt for the nearest one... and a friend with a car.  The company sent us four flavors to try, all in their "Signature Chip Flavors" line.  Each of these flavors is special as it contains a massive amount of chocolate ribbon chunks.  The first one we tried was the Mint Chocolate Chip. 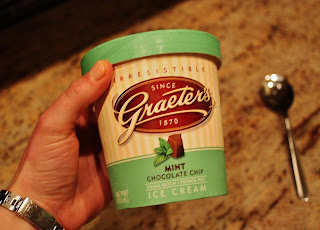 One thing we noticed throughout each of the varieties we tried is the pure flavor, which reflects the pure ingredient list.  The list looks similar to the types of ingredients you would use in homemade ice cream- real cream (from farms that don't use artificial growth hormones), pure cane sugar (no artificial sweeteners or corn syrup), and no iffy ingredients I can't pronounce.  Look at the label on the ice cream you typically eat-- probably more stuff in there than you thought/there should be.  I will note that most of the flavors contain one or two soy products, which is unfortunate for those with allergies.

The Mint Chip was subtly minty, and not in the least bit weirdly green-- just natural mint extract.  The texture is unbelievably creamy, with just the right amount of crunch from the chocolate swirled throughout.  Graeter's uses a "French Pot" process, which blends the cream and the egg together into a smooth custard while slowly swirling in a frozen metal pot.  As it freezes, it's scraped off of the side and folded into itself, preventing air contamination (hello freezer burn!), and creating a super dense texture.  What makes the process even more unique is that only two gallons are made in each batch- makes me feel kind of special! 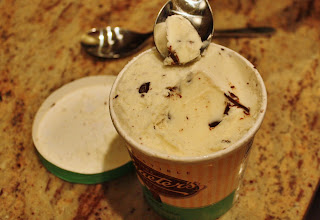 I'm usually not a huge fan of vanilla ice cream, since it's a bit on the boring side.  However, I loved the Graeter's version-- partially because of the chocolate!  Even without it, the richness of the ice cream itself would have been just as enjoyable.  The use of Madagascar vanilla gives it an extra vanilla punch you don't usually find in vanilla "flavored" products.  This pint was a good example of the huge chunks of chocolate you find throughout- not just tiny specks you hardly notice, but good solid pieces that melt in your mouth. 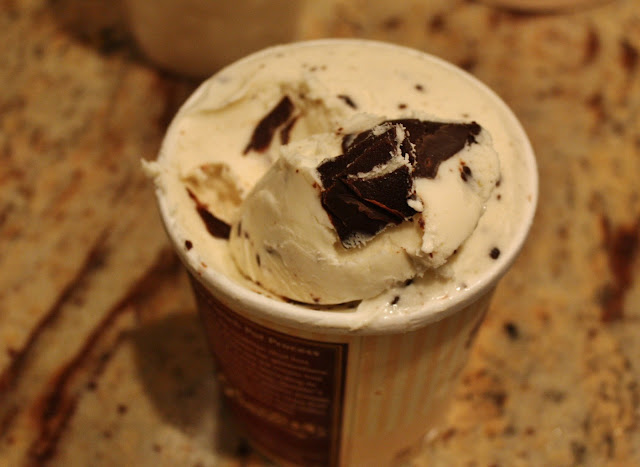 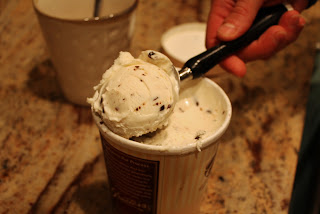 We hit jackpot with the third flavor we tried, the Chocolate Chocolate Chip.  It was both of our favorites- and for good reason.  Cocoa plays a huge role here, but isn't overwhelming- just the right combination of bitter and sweet.  Sprinkle a little salt on here, and you've got one of the best simple desserts you can find.

Another thing you might be wondering-- the nutritional status of ice cream is never great, but Graeter's is particularly high in fat, as it's made with mostly heavy cream.  You might find that your frozen yogurt or sorbet can rack up 150 calories per serving, but the good stuff here will get you twice that.  However, I find that just a few bites (about the size of a single scoop) is just as rewarding and satisfying as a whole pint of the "low fat, 1/2 the calories" kind. 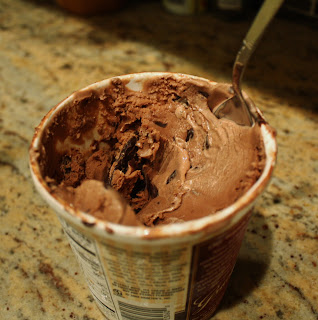 We unknowingly saved one of the best for last- one of the companies all time best sellers, the Black Raspberry Chocolate Chip.  For some reason I was under the impression that it was Black Cherry, and since neither of us love cherry flavored foods, we continued to overlook it.  However, it was a sleeper hit, with a bit of a tart tang from the black raspberry puree that plays a starring role.  The chocolate was a perfect match for the fruit, the combination contributing to my fondness for this flavor. 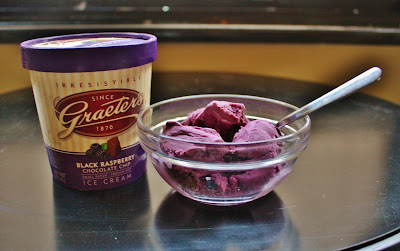 A big thanks to Graeter's for shipping us some samples- the values of the company, their commitment to natural products and old-fashioned production techniques speaks to me, but the textures and flavors of their ice cream seal the deal.  If you live near a Weis', look for this stuff soon, and send me a pint of the Peanut Butter Chocolate Chip if you see it!
Posted by A and J at 8:11 PM