Even though we love exploring the entire city, it's always fun when we acquire a new neighbor.  A new food-producing neighbor is the best kind of neighbor!  Formerly the little pop-in-and-take-out Pad Thai Shack, the narrow storefront on 18th and Sansom was reconfigured by Nicole Marquis (hence, Marquis & Co on the logo), who formerly ran the amazing but now defunct Horizons.  Now the spot is known as HipCityVeg, and the concept is a vegan, fast food joint based squarely on plant materials. 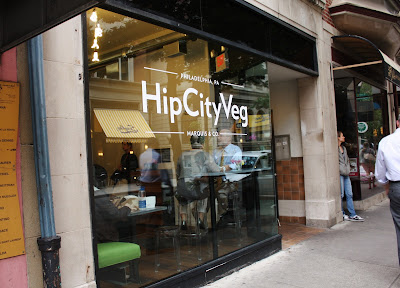 Most of the customers are coming in to grab food to go, as seating space offers only four two-top tables and a tiny counter.  Each of the three times I've visited I've noticed a LOT of traffic.  Thankfully, they are quick and efficient- get you in, get your order plugged into the iPad with the cashier, and in a few short minutes, you're out with a bag of food.

The menu offers a good range of eats for such a tiny place- primarily salads and sandwiches, but also smoothies, several dessert options, and some fun drinks.  Prices are a bit steep, but considering the quality and range of ingredients you're paying for-- as well as the all-plant-based compostable packaging- I'm OK with sucking it up and paying a few extra bucks.

We placed our order for a few dinner items, but chose to get a "Groothie" to split as we waited ($4.50).  A smoothie concoction served out of a fun frozen drink machine, the ingredients inside can vary a bit but usually contain the staples of kale, apples, and bananas.  On our visit, we got the added bonus of pineapple.  Together, they blend up into a deliciously smooth and refreshing sweet treat.  A little pricey, as I will probably continue to point out, but on par for other nearby smoothie makers such as Pure Fare and Jar Bar. 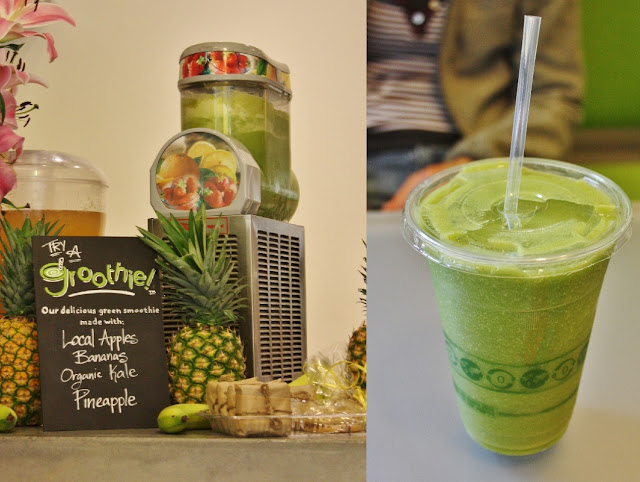 HipCity is completely vegan, but vegan doesn't have to equal healthy!  I honestly feel like most of the offerings would be satisfying for vegetarians, vegans, and meat eaters alike (22nd & Philly found a veggie sandwich that may finally live up to it's meat counterparts!).  Sweet potato fries are a popular side option here- crispy, salty sticks that come with an interesting sauce, a cilantro black bean concoction ($4).  A great flavor combination with the sweet potatoes, but honestly I think I just prefer regular ketchup.  Still, this was a decent sized portion that is great for sharing. 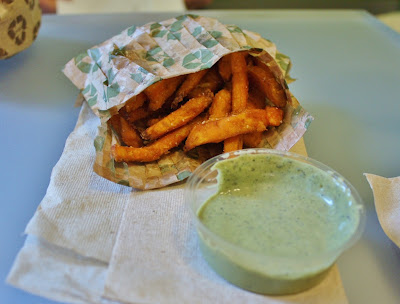 As I'd already tackled the HipCity Ranch (still my favorite menu item), and the Tofu Curry Wrap (also fantastic) on previous visits, I felt the Buffalo Bella was the third most delicious sounding sandwich option ($8.50).  Many of the sandwiches are served on the same bun- a round, fluffy, almost overwhelmingly large one.  The Bella doesn't have a faux meat product, but instead is filled with crispy fried portobellas- can't go wrong there. 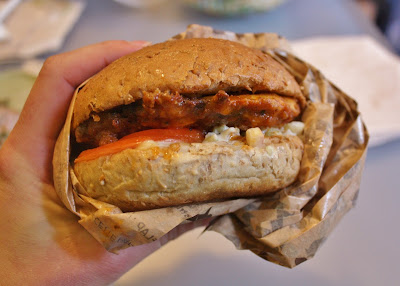 Served with thinly sliced tomato and a creamy celery slaw, the sandwich is almost certainly modeled after the typical buffalo hot wing in terms of flavor profile.  Unfortunately, I think they forgot the addition of buffalo sauce- it wasn't spicy and was missing that vinegar kick.  Good, but definitely would have been better with more sauce and a little less bread.

We debated between several of the other menu items, but I pushed for an order of the Udon Noodle Salad, as the ingredients list sounds phenomenal ($9).  Spicy "chick'n" strips are grilled to a crisp and have a really meaty flavor and texture-- seriously.  A lot of faux meats are nothing at ALL like meat, but here they do an excellent job fooling my tastebuds.  The salad underneath consists of spicy arugula, lots of udon noodles, shredded carrots and cabbage, some sprouts and a little daikon radish all tossed in a thin sweet and salty black bean dressing.  Just as I was expecting, a great ratio of different flavors, textures, as well as healthy/non-healthy ingredients.  Plenty of noodles to fill you up, but also lots of greens for added crunch and nutrients.  A complete meal in a bowl-- and for less than $10. 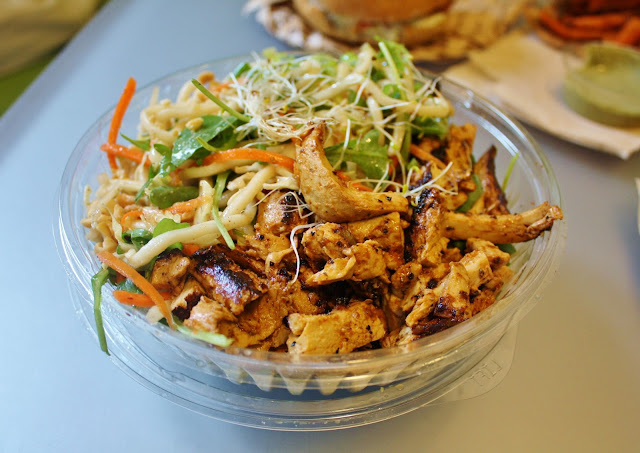 Seeing as I've been here three times since they opened two months ago, they must be doing something right.  Perhaps it's the trifecta of location, flavor, and speed (plus added bonus of lots of veggies!), but whatever it is, they've got me hooked.  Every time I walk by I wonder why I didn't make plans for a pit stop- and I can tell I'm not the only one!