At the beginning of the year, the "Midtown Village" duo of Marcie Turney and Valerie Safran revealed their latest project, a complete transformation of former Indian restaurant Bindi into a Spanish tapas spot called Jamonera.  At this point in their careers, it's inevitable that anything they open will be successful.  Craig LaBan sure thought so, awarding Jamonera (a play on the Spanish word for ham, an ingredient seen throughout the menu) three bells only four short months after opening.

It took us awhile to make it there ourselves, but a sweet rewards check from OpenTable encouraged us to make a reservation- the bill at tapas restaurants always seems to add up quickly!  The space is pretty dark- lots of rich colors, a copper bar, and wood chandeliers- definitely unique.  We were sure to request a brighter table in the window thanks to the longer summer sunlight.

Like any tapas place, the menu is extensive and everything sounds delicious, making our decision making a bit difficult.  The majority of the items are under $10, and our waitress suggested three items per person, also standard for a tapas menu. 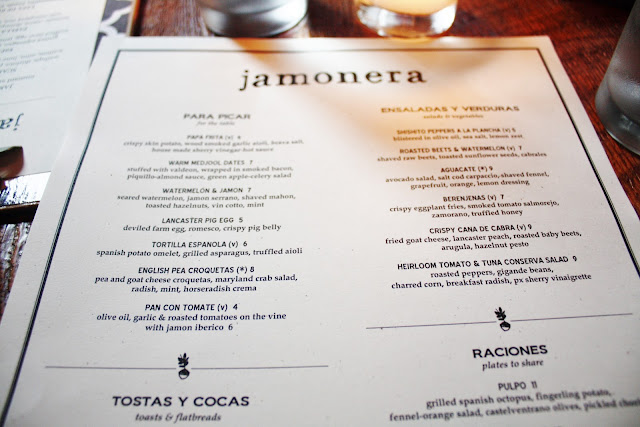 The first dish out of the kitchen was the berenjenas ($7), probably the most beautiful plate of fries I've ever seen.  Long cubes of eggplant are lightly breaded and flash-fried, making the porous starchy vegetable soft and mild-flavored (though best eaten hot!).  A shaving of zamarano- a slightly nutty aged Spanish sheep's milk cheese- as well as a drizzle of truffle honey melted into the crispy fries. I could have done with more of each!  A smoked tomato dipping sauce was both too sweet and too acidic, but the fries were just fine on their own.  The simple fries need a simple accompaniment, and I initially worried that the kitchen was perhaps trying to do too much. 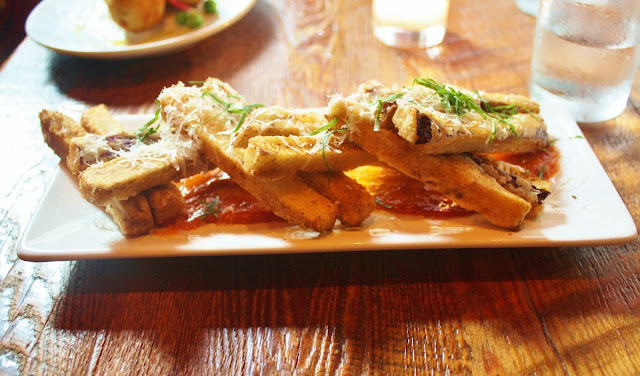 Our second dish immediately turned around the dining experience.  The English pea croquetas ($8) was one of the most creative and well-executed plate of fried food that I've ever tasted.  A mixture of peas and goat cheese is rolled into golf ball sized bites and coated in a thicker breading, similar to a hush puppy.  The bright flavor of the peas and the creamy goat cheese, though a seemingly strange combination, worked incredibly well together.  Crab salad made with radishes and fresh mint was light, contrasting the fried dough underneath and providing both a temperature and textural compliment.  A horseradish cream sauce underneath tied everything together. Plenty of components on the plate here, but the dish was one of our favorites- a sign that the kitchen is capable of producing seamless dishes with a complex ingredient list. 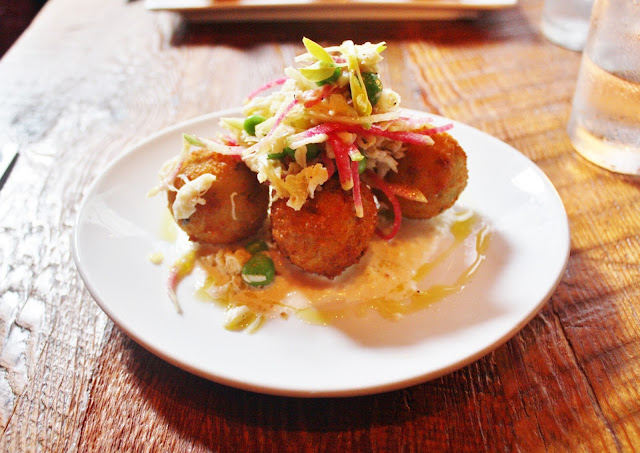 The Lancaster pig egg ($5) was an auto-order for me- I love seeing how a basic deviled egg can be kicked up a few notches.  Two essential additions were made here- fat pieces of crispy pork belly (no commentary necessary here), and a romesco sauce.  I had no idea what a romesco sauce was, but we absolutely loved it.  Red peppers, tomatoes, and almonds are blended together to make a chunky red sauce- this would have been terrific over pasta with a few olives. 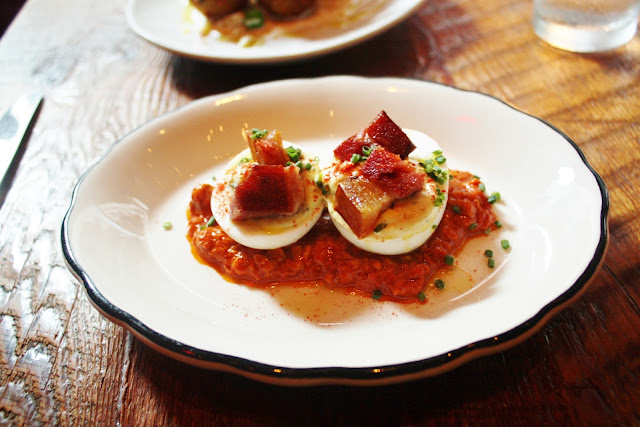 We were given a plate of olives and firm white beans at some point in the beginning of the meal, which was fun to snack on between dishes.  Olive palate cleanser?  Why not. 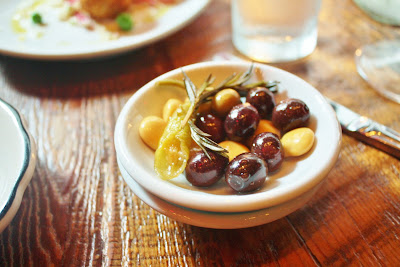 While the olives are Jamonera's version of a gratis starter, we still felt the need to order a side of carbs. Sister restaurant Barbuzzo makes a mean grilled bread, so I felt that $2 was an appropriate sacrifice for another taste.  Crunchy and charred on the edges, fluffy and olive oil permeated in the middle- almost as good as our dad's version. 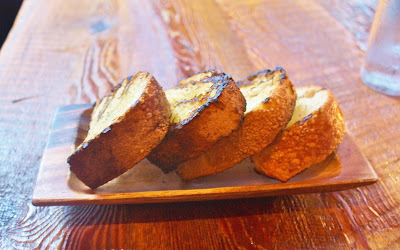 We balanced our more appetizer-like start to the meal with a couple of "raciones"- larger plates to share.
The seared scallops ($13) were another perfect reflection of summer: lightly seared with a tender center and accompanied by a summer squash, eggplant, and pepper pisto.  I fell in love with pisto in Boston, but this rendition was more appropriate for the light scallops- not as dense with each ingredient still resembling its original appearance.  A few seared baby tomatoes and a heap of chunky chickpea and olive puree rounded out the dish- a fine example of a light and fresh yet extra savory dish. 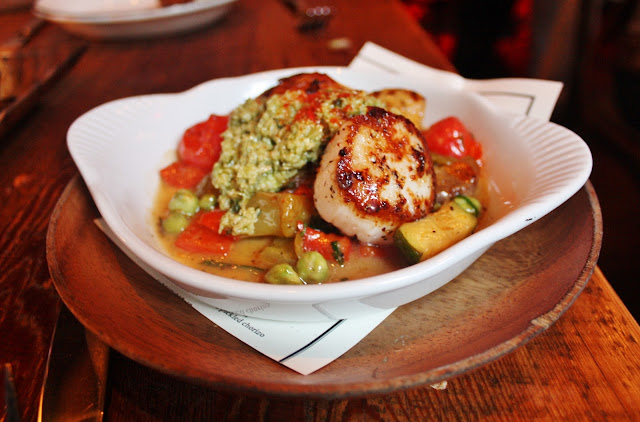 A had done some internet-sleuthing before our arrival, and she insisted we try the foie torrejas ($12)- of course, I never say no to a fatty piece of duck liver.  In this dish, the sizeable (especially for the price!) chunk of foie is kept relatively intact, allowing it to be enjoyed as is.  The rest of the components were incredibly unique, providing a sweet, almost dessert-like background for the creamy foie.  A thin piece of french toast is drenched in a thick, raisin-y sherry and topped with caramelized peaches and pickled cherries. A sprinkle of toasted almonds complete this "breakfast"- a completely new foie experience. 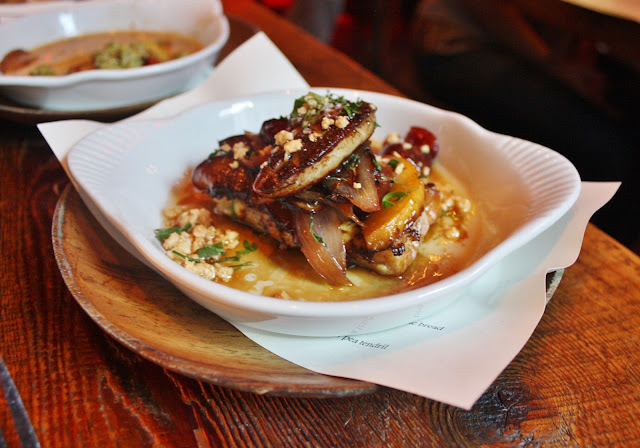 Although we had consumed plenty of food at this point, we knew dessert was not to be missed (hello Barbuzzo budino!).  Desserts here are extra-large, venturing away from the small-plate norm of the tapas style menu.  A & I agreed on the jarra de queso ($8)- quite literally a jar of cheese...cake.  This cheesecake wouldn't have been able to stand alone on a plate- it was like an incredibly light whipped cream cheese mousse with only the subtlest sweetness.  A crust of marcona almonds and brown butter provide a crunchy cookie crumble in each bite, while fresh fruit (enormous raspberries and blackberries!) celebrated summer.  A beautiful and perfect ending to the meal. 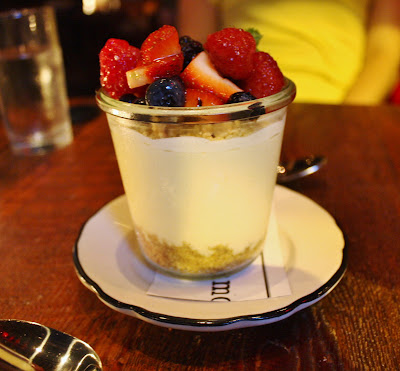 On our way home, I texted one of our friends and declared Jamonera a contender for best tapas in Philly- up against some serious competition in Jose Garces' realm alone.  The kitchen here is definitely turning out some serious foodie fodder- the complexity of the dishes provided for plenty of discussion between the visual appeal and ingredient combinations.  It also speaks volumes about Turney as a chef, that she can wander the world of flavors and cooking styles and come out with winning dishes every time.