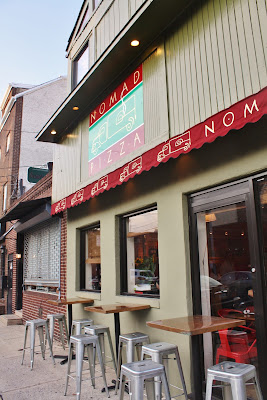 Normal people might go home and nap off a food coma after an afternoon BBQ.  Us? We eat pizza.  With our dad in town, we had to take full advantage of fun dining experiences for every meal.  One of his favorite food groups happens to be pizza (we've made this claim before, when we took him to Pitruco) and Nomad was next on our list of pizza places to "discover."  Located in what used to be Horizons, the bright space downstairs has been rehabbed and fitted with a wood-fired oven.  It was a toasty evening so we bypassed the fun sidewalk seats to grab an end of the long communal table with a view of the pizza baking.
Considering the menu consists simply of salads and pizza, we had a hard time making some decisions.  A list of seasonal specials complicated things further, offering up a NJ corn pizza that certainly piqued my curiosity.

Since we'd just eaten a burger, we decided to start things off on the lighter side, opting for the Organic Greek Salad ($10).  While Nomad sources lots of their ingredients from local and organic farms, this was the only menu item labeled as such.  Romaine spears (pared down leaves) were lined up along the plate and adorned with kalamata olives, half of a hard boiled egg, sizeable chunks of green pepper and cucumber, heirloom cherry tomatoes, a few crumbles of feta, and some pickled red onion.  A light red wine vinaigrette was drizzled over the veggies.  A bit of a deconstructed version of a Greek salad- fun and fresh. 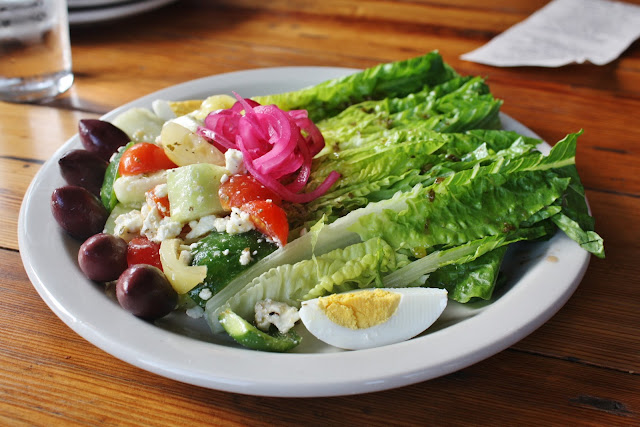 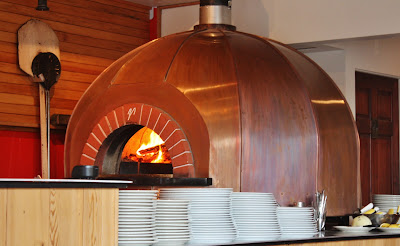 The big copper orb filled with a wood-burning fire was kept quite busy during our time at Nomad.  A rotating mix of pizza experts were on hand to shuffle the pies around and pull them out with exactly the right amount of char and an even bake.  Two couples came in after us and were served before us- if you don't order apps, the pizzas come to your table very quickly!


It wasn't long till I saw a couple of steaming plates headed our way. First up was the spicy sausage pizza ($14), made with a base of San Marzano tomatoes layered with mozzarella and parmesan cheeses, crumbled sausage, and caramelized onions.  The sausage, while we prefer slices over crumbles, was perfectly seasoned with tons of fennel seeds.  A finishing drizzle of olive oil upgrades the pie, emphasizing the creamy cheese and- no doubt the best part- the chewy crust.  Lightly dusted with flour and covered with a smattering of charred bubbles, the crust was perfect.  While it's thick enough to support the weight of the ingredients in the middle, it flares out at the edges with a crackly outer layer surrounding a soft and chewy inside.  It has a yeasty flavor, slightly sweet, that contrasts the savory toppings. 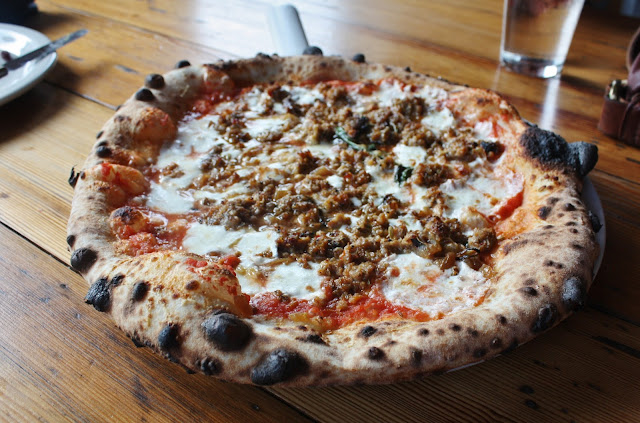 A and I wanted to try more than one other pizza without overloading our stomachs, so we convinced the pizza makers to make a two-in-one.  Both the spinach and shiitake mushroom pies have similar bases- no sauce, mozzarella and toma cheeses, and are both topped with garlic, olive oil, salt and pepper.  The spinach obviously has some of the good green stuff, while shiitake mushrooms and caramelized onions topped the other half.  Without the sweetness of San Marzanos, the salty clumps of olive oil-soaked garlic played a bigger role- one we enjoyed immensely.  The crust, cheese, and garlic finish really made the pizza- the spinach and mushrooms were just finishing touches. 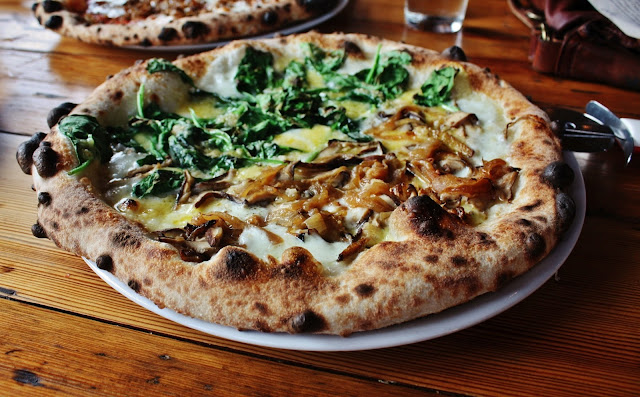 Chewy crust, stringy cheese, and tiny tidepools of garlic and olive oil... we were sold. 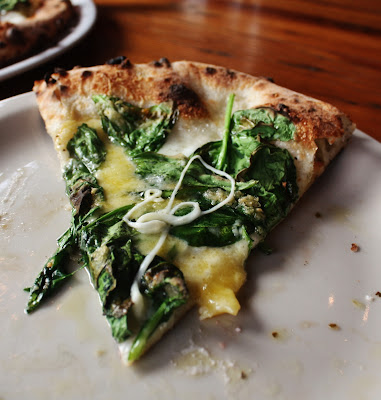 At the bottom of Nomad's menu, they define their namesake word, complete with their alternative definition of "the best pizza you've ever had."  To that regard, they're in TOUGH competition with Pitruco- I'd honestly need a side by side comparison to declare a winner.  Nomad might have a step up considering they have a bricks-and-mortar location that I can visit any evening of the week... and believe me, I want to! 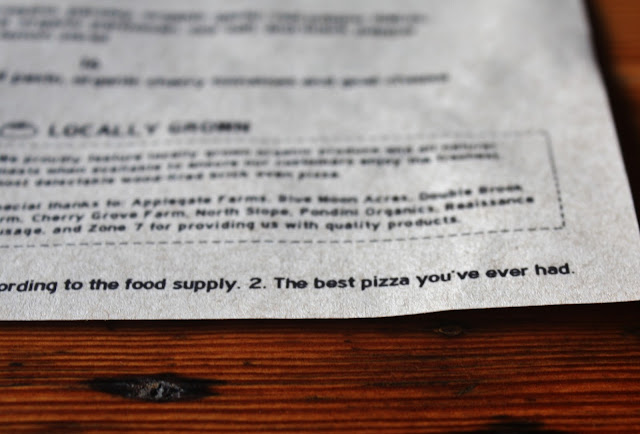