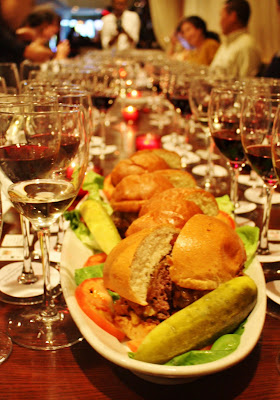 Last week, we were invited to attend a unique event hosted by a wine producer, Georges Duboeuf. The premise of the event was that wine (specifically Beaujolais, one of the specialties of this producer) and burgers pair well.  I don't claim to know anything about food and wine pairings, but the company snagged author and wine expert Mark Oldman to promote this idea.  He did a fine job of explaining the differences between seven (hence the glassware explosion on the table) different Beaujolais varieties and regaling us with some tales from the life of a "wine expert."

The reasoning behind this specific pairing is based on the fact that this particular line of Beaujolais is:


I thought the lesson was informative and entertaining, but to be perfectly honest, I was here for the burgers.  We were promised tastings from four of the "best local burgers from top restaurants in Philadelphia," and there was no way I was turning that down.  During Mark's discussion, platters of ground beef sandwiches were delivered to our table, already sliced in half to promote sampling.

First up was the Rouge Burger, a rather well-known rendition from the Rittenhouse establishment Rouge.  The first thing I noticed about this burger was how ridiculously thick the patty was.  It was also the exact same color throughout the cross-section, implying a near well-done temperature.  The patty was only minimally adorned with caramelized onion and a bit of gruyere cheese.  There were also plenty of onions mixed into the well-seasoned beef.  In this case, the patty played the starring role with a great flavor, but I felt it was a little too heavy to really enjoy- more like a brick of meatloaf than a burger.

Up next was a burger from 500 Degrees- the burger-only Rouge spin-off.  Even though 500 Degrees is essentially a descendent of Rouge, the thick and fluffy bun was the only similarity between the two.  Here, the meat was coarsely ground and formed into a more approachable patty.  A nice sear on the outside gave way to a perfectly pink center.  However, the toppings definitely came into play here- a fried egg, arugula, tomato, and braised bacon- not too much of each, but certainly enough to draw the attention away from the beef.  Although I approved of the toppings and the temperature, nothing about this burger really wow'ed me.


The third burger I tried was from Spiga- an odd contender in this "competition."  Spiga is a relatively new Italian restaurant (brands itself as "Modern Italian Dinning" on it's website. And yes, they spell dining with two n's.) that hasn't gotten the best reviews.  I was surprised they even had a burger on their menu- looking over the other options depicted fairly standard Italian dishes.  A burger? Somewhat strange. 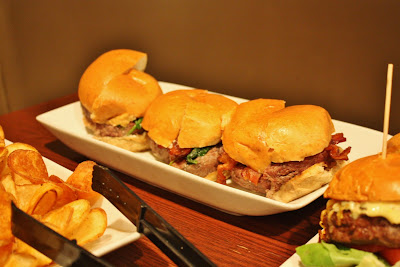 However, the burger definitely looked intriguing.  A more compact sandwich made with Angus beef, the patty is topped with sauteed spinach, applewood-smoked bacon, a creamy herbed goat cheese, and a thin layer of onion mostarda.  Definitely the most inspired set of toppings, all of which came together with the meat to create a heavenly bite.  The goat cheese seemed to meld everything together, soaking into the bun and the patty- creamy and delicious.  The meat was cooked a bit more than I typically like, but the cheese and spinach helped keep everything moist.  By far, the flavor of this burger was a unanimous favorite.

The last burger was made by the house kitchen: Alfa's Route 66 American Burger.  This was the only option with a unique bun- a really eggy, almost brioche-y potato bun that I was borderline creepily obsessed with. It was a little sweet and had that smooth texture that I love.. I could have eaten just the bun and been happy.  However, Alfa must know more than one of my weaknesses, as they added thick slices of crunchy pickles on top of a layer of cheddary cheese.  A rare patty, lettuce and tomato, and this sandwich found a special place in my heart.  It took a close second after the Spiga burger.


I was honestly pretty surprised by the outcome of our little burger fest.  I expected big wigs Rouge and 500 Degrees to step up in a big way, and they both just fell a little flat.  Regardless, it was really fun to do some burger taste-testing and compare notes with fellow bloggers and burger eaters.  Check out Steph's post for more details on the wine and her take on the burger pairings!  Of course, many thanks to Alfa for hosting us and Georges Dubouef for organizing the event (and footing the bill!).
Posted by A and J at 2:19 PM