We were recently invited to take part in a recipe contest, hosted by College Inn (you know, the chicken broth company!).  They generously provided some fun cookware and an array of different broths, from basic to complex (the Thai Coconut Curry just might be my new favorite for quick-and-easy Thai soup).  The contest is co-hosted with celebrity chef Amanda Freitag- although she keeps busy with her job as a judge on Chopped, she made time to recreate one of her father's family recipes to inspire at-home chefs like ourselves to submit their own recipes.  Since we were prompted to follow suit, we asked our dad for the recipe for one of our favorite family meals growing up-- unfortunately, it doesn't have a fun or useful name, as we've always dubbed it "Mom's Favorite Meal" (for obvious reasons).

The recipe has two secret ingredients: Marinated Artichokes (including the spiced oil marinade itself), and fresh feta in brine.  We added a third secret ingredient: College Inn Chicken Broth, of course. 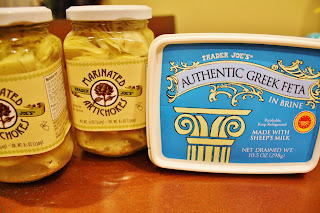 It all begins with chicken.  Four chicken breasts, sliced in half to produce eight thin pieces of meat.  After a simple coat of salt, pepper, and garlic powder is applied, we browned them briefly on each side before adding a cup of chicken broth to the pan.  The meat slowly simmered in the combined juice of the meat, a little olive oil, and the chicken broth, leaving it plenty moist. 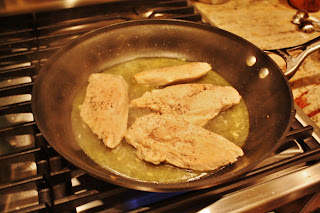 With the chicken taking care of itself, I prepared the (very short list of) additional ingredients.  My dad suggested three pounds of onions, but since I purchased mine at a local produce shop, I guesstimated with two enormous onions.  Peeled and "chunked," they began to cook down in a stovetop stock pot.  After a few minutes of "sweating" (Dad's terminology), I added the marinade from one of the jars of artichokes, providing a bit of oil to prevent any sticking, a little liquid to give the onions some steam, and a whole lot of flavor.

After another 2-3 minutes, I added four chopped Roma tomatoes (the small, oblong shaped variety), both jars of artichokes (after draining the second one), and most of the brine from the feta (save the cheese for later!).  This creates an almost soupy mix of vegetables, and some unbelievable smells.  Allow it all to cook together for about ten minutes.

Once the chicken is cooked through, I cut the breasts into strips and lay them in a baking dish, adding the chicken broth pan juice to keep all the flavor in the dish. 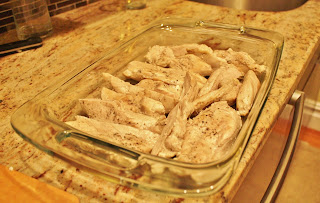 The onion, tomato, and artichoke mix is then spread on the top, and again, include the liquid, as this is where all the good stuff lives.  However, we did have to toss some of the liquid, as our baking dish was almost filled to the brim!  We don't want any spills in the oven here. 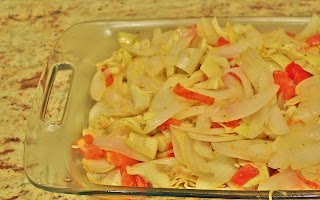 Finally, crumble the feta over the top of the mix in an even and generous layer.  I used about six ounces total. 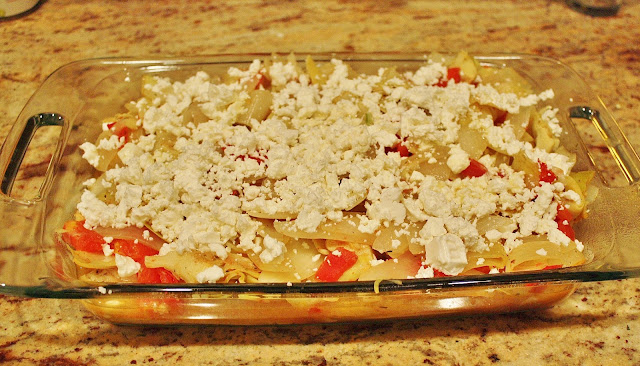 Bake at 350 for half an hour, until the feta has melted and the liquid is bubbling away.  Serve atop your pasta of choice, and make sure you dish up some of that liquid as well!  The slurpy noodles at the bottom are the best! 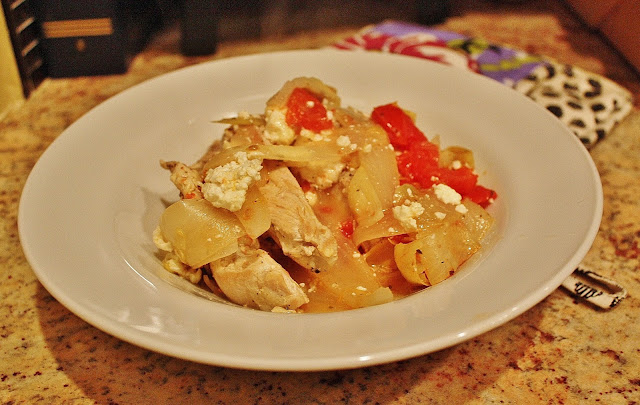 With just a handful of simple ingredients, the dish comes together quickly but provides a ton of flavor- those three secret ingredients each pack a punch.  The artichoke marinade is sweet and spicy, while the brine provides a super tangy bite, and the chicken broth adding a depth of meatiness without a ton of extra fat and salt.  Every mouthful was like a trip back to childhood (when we remember being somewhat averse to the artichokes-- how weird!).  It also can serve up to eight, so it's great for large families, dinner parties, or lots of freezer meals (the flavors are even better later).  Special thanks to our dad for sharing the recipe, and of course, our mom for making this dish family famous! 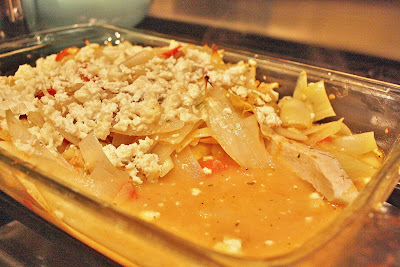 AND good news for all of you, you can still enter the recipe contest yourself- no special invitation necessary!  Share a family favorite that uses any of the College Inn products via their Facebook page, and you can win $5,000 AND a trip to San Francisco to eat your heart out AND meet Amanda Freitag-  sounds like a great prize to us.  The contest ends this Sunday, October 28th, so get your submissions in soon!
Posted by A and J at 8:06 PM