While A was away on her Jamaican honeymoon, I decided to take my own little "tropical vacation," venturing into the warm arms of La Calaca Feliz, a contemporary Mexican restaurant in the infrequently-visited Art Museum/Fairmount neighborhood. Right around the corner from the stately but gloomy walls of the Eastern State Penitentiary, La Calaca Feliz is the perfect contrast, with a name meaning "The Happy Skeleton" and a vibrant atmosphere.  Cushy red leather banquettes and the bright colors and grins of the skeleton murals provide a thematic background that is anything but deathly.

My dinner date and I had planned for a nice, long meal where we could simultaneously catch up on life and try as much of the menu as possible- the latter always being the goal of a food blogger.  After we finished placing our order, our (very sweet and attentive) waitress informed us that she thought it was "a lot of food for two people."  Well... challenge accepted.

A last minute addition to our order was a bowl of tortilla soup ($5.95), which the kitchen graciously split between two bowls. The base of the soup was a tomato broth spiced with guajillo peppers- just enough to wake up our tastebuds. The sweet and spicy were expertly balanced with a squeeze of lime juice.  Chunks of chicken and kernels of corn bulked up the broth, with the addition of a few slices of melt-in-your-mouth avocado and a sprinkle of cotija cheese for garnish.  This was a terrific start to our meal, and a perfect dish for a cool fall evening.

The first true appetizer (or antojito) of the evening was the pork belly gordita ($10.95).  The star of the plate was the crispy, salty pork belly- two enormous slabs of it.  The belly perched atop the gordita- a soft cake made with masa (corn flour) and oozing melted cheese. A smoky and spicy habanero based sauce paired well with the dense cake, while a scoop of a simple radish and shredded cabbage slaw balanced the heavier components of the dish.  Similar to the cotija finish of the soup, a drizzle of queso fresco tied the plate together with a bit of cream. 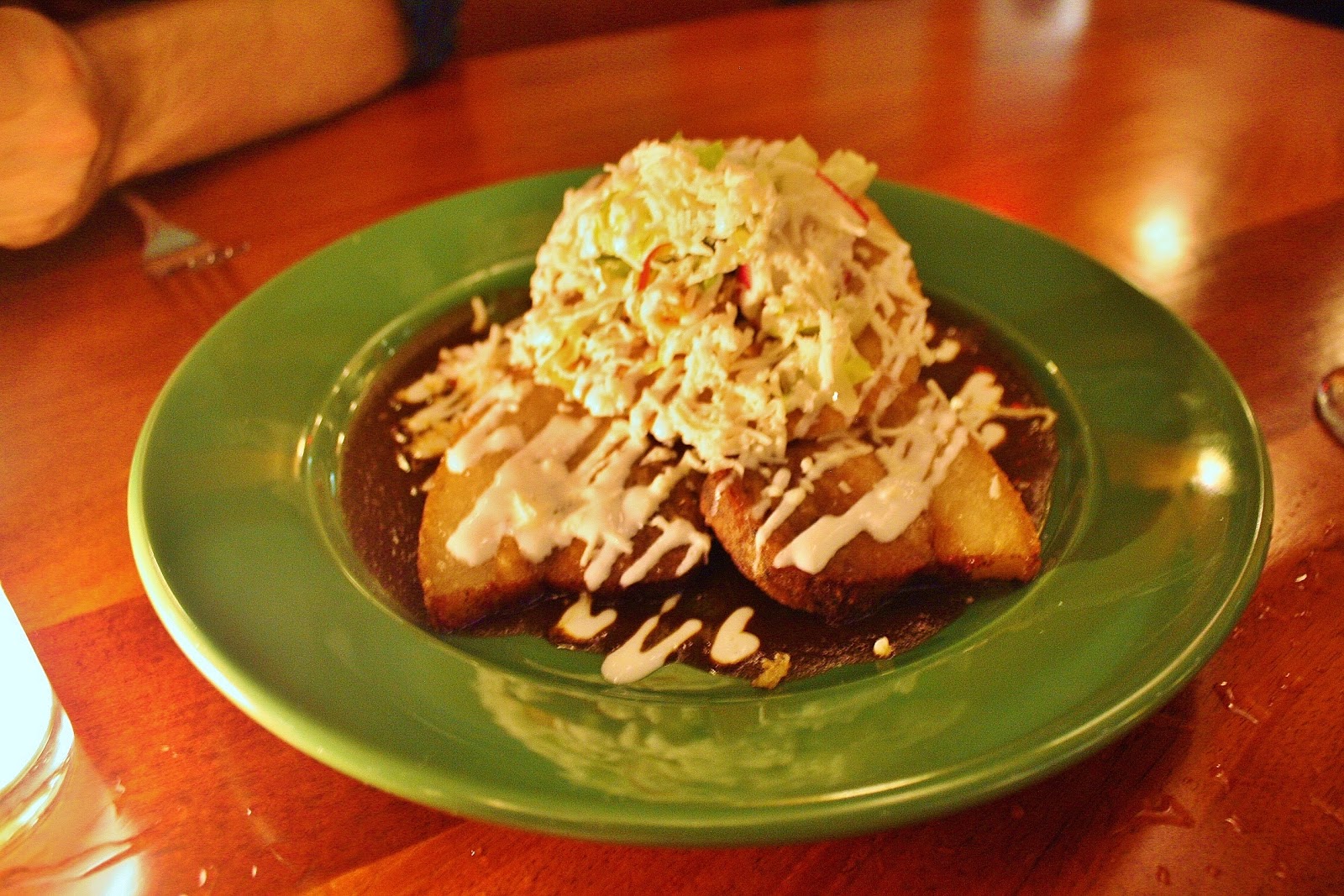 One of the more intriguing app options was the duck en nogada ($12.95)- a green chili pepper hollowed out and baked to form a softened shell for shredded duck confit. The meat itself was a bit on the salty side, but a tuft of cilantro, radish matchsticks, and the fun surprise of crunchy and juicy pomegranate seeds helped to freshen the richness of the meat.  Our unanimous favorite part of this was the pool of creamy walnut sauce surrounding the pepper- made with cream, evaporated milk, a bit of sugar, and chopped walnuts, the "nogada" was unbelievable.  This dish is popular on Mexican Independence Day as it showcases the national colors of Mexico: green, red, and white. Beware- bites closer to the stem contain a serious kick! 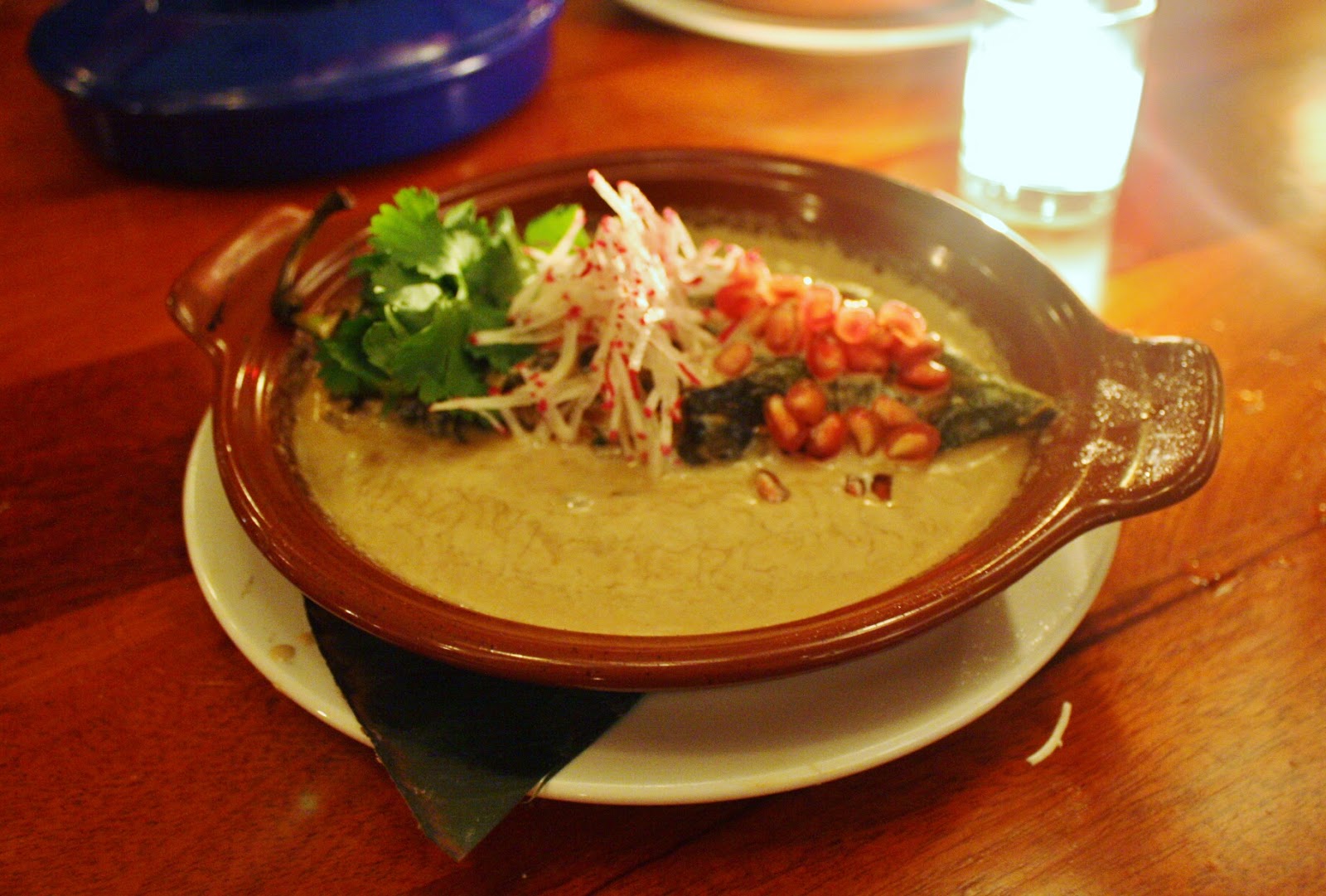 A more recognizable dish is fundido, and La Calaca offers two varieties- one with crab and one with chorizo.  We opted for the latter ($9.95), and I admit to being a little nervous about eating a pool of cheese, but the addition of plenty of strips of red peppers and mild green poblanos actually helped fulfill my veggie requirements for the day.  We were a little confused by the soft, hot-off-the-press flour tortillas severed alongside the fundido- we expected crunchy chips for dipping.  However, making a little quesadilla with the fundido turned out to be the perfect way to consume this cheese-and-pepper-fest. 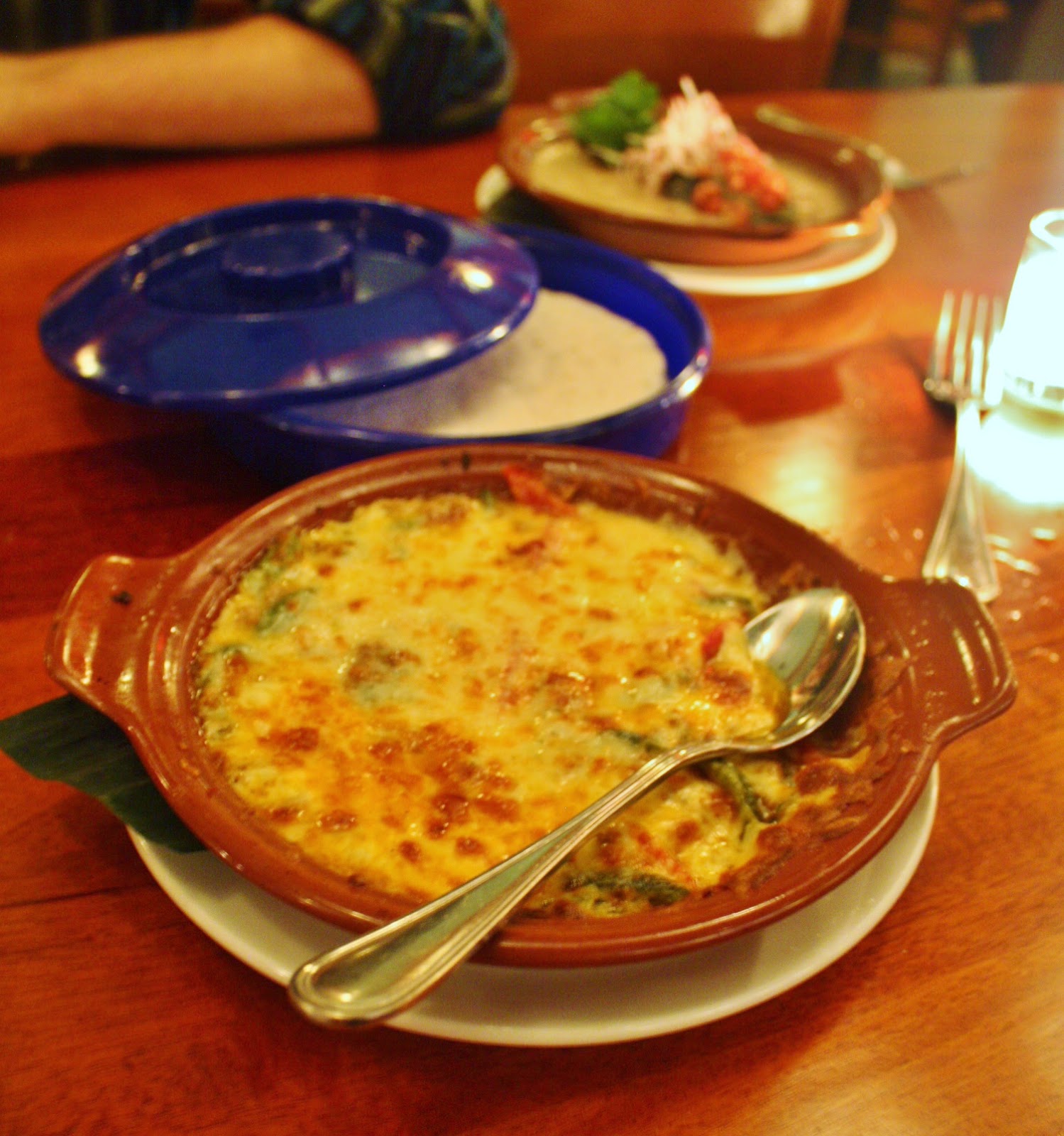 While I happily would have made a meal out of appetizers only (seriously- check out those portion sizes!), we knew we needed to try some Mexican staples- tacos and enchiladas. The Carnitas Tacos ($10.95) came as a serving of three, generously stuffed full of pulled pork braised in orange juice and Coke.  There were lots of crispy edges on the meat, providing a great texture to each bite.  The roasted red salsa as well as the sugary  braise provided a surprisingly sweet element, helping these tacos stand out from the many other carnitas tacos I've consumed in my lifetime.  Traditional toppings of cilantro, chopped white onion, and avocado sealed the deal- these are worth the trip alone. 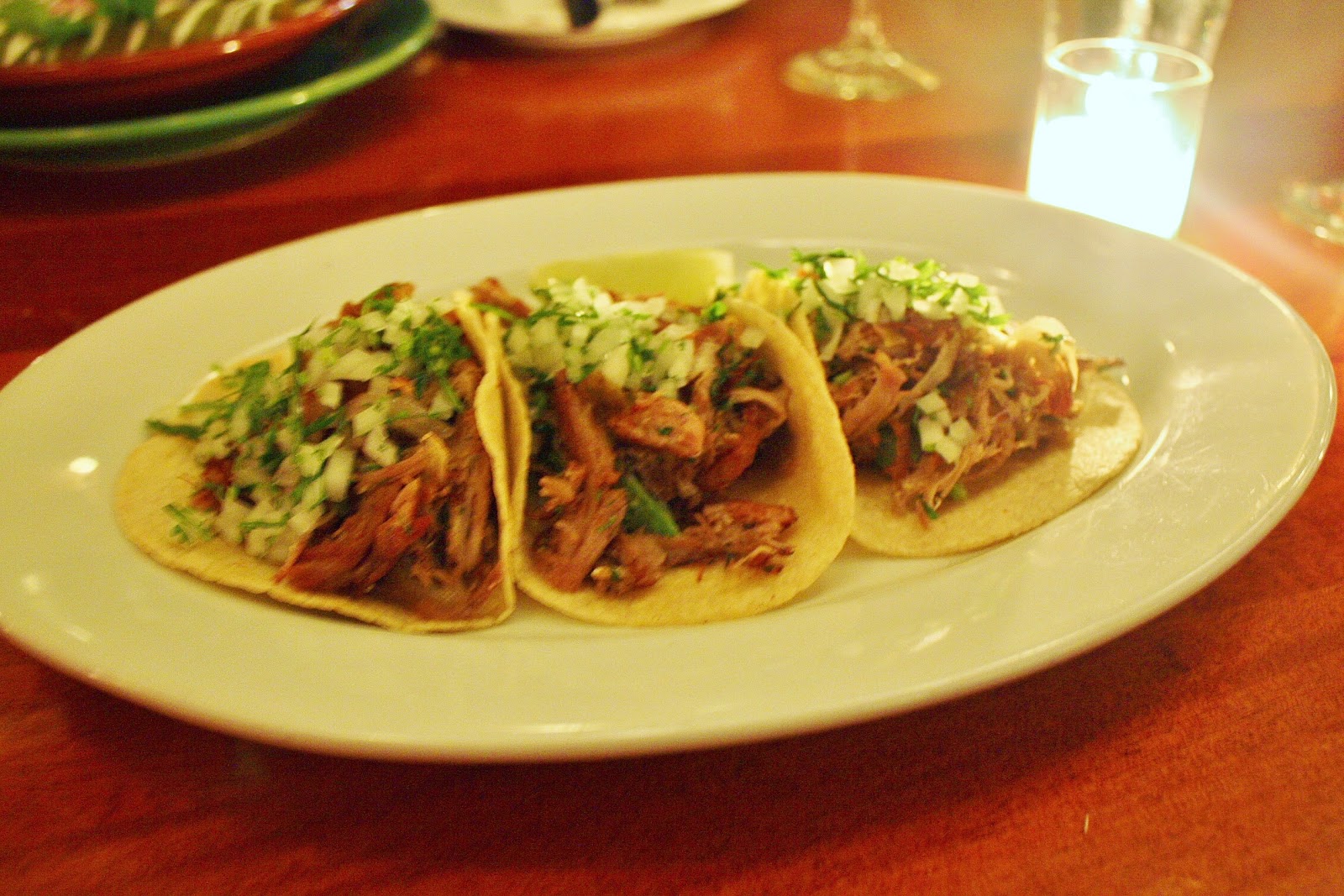 However, the enchiladas held their own as well.  We easily agreed on a chicken filling and green chile sauce ($13.95). While the chicken and poblano pepper stuffed tortillas were tasty in their own right (good ingredient proportions, well-cooked chicken), the green chile sauce was electrically vibrant- I literally wanted to ask for a glass of it.  Ubiquitous cilantro, radish, and queso fresco garnishes were simply afterthoughts. 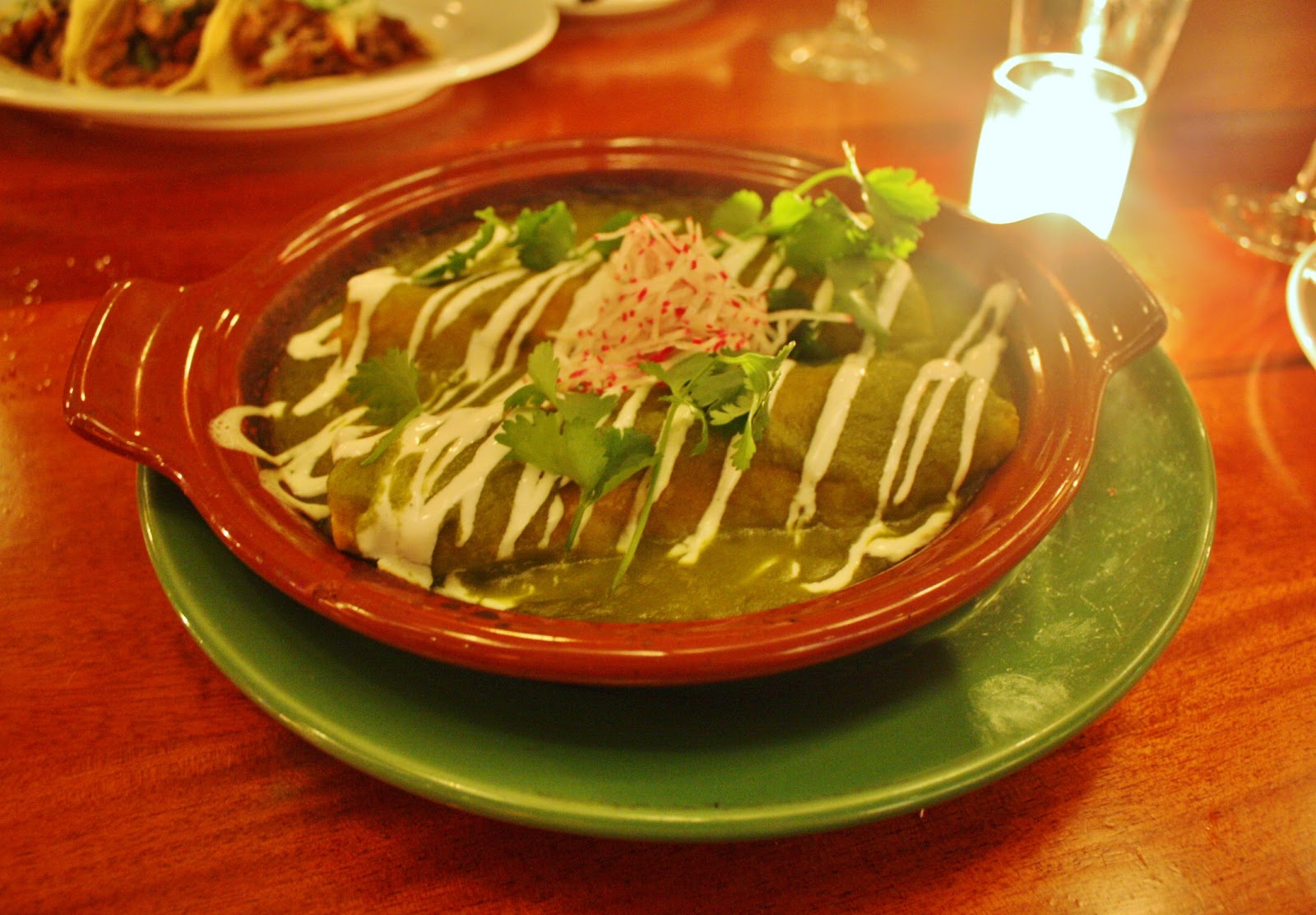 We passed over the short entree portion of the menu (gotta cut back somewhere!) but did split a simple dessert of ice cream and sorbet ($4.75).  Both the lime and raspberry sorbets provided punches of flavor that seemed extra-concentrated without being cloying- just the right amount of tartness.  The churros ice cream was much sweeter, packed with brown sugar, cinnamon, and crispy bits of fried dough.  After a lot of meat and cheese and peppers, this was a light and refreshing end to the meal. 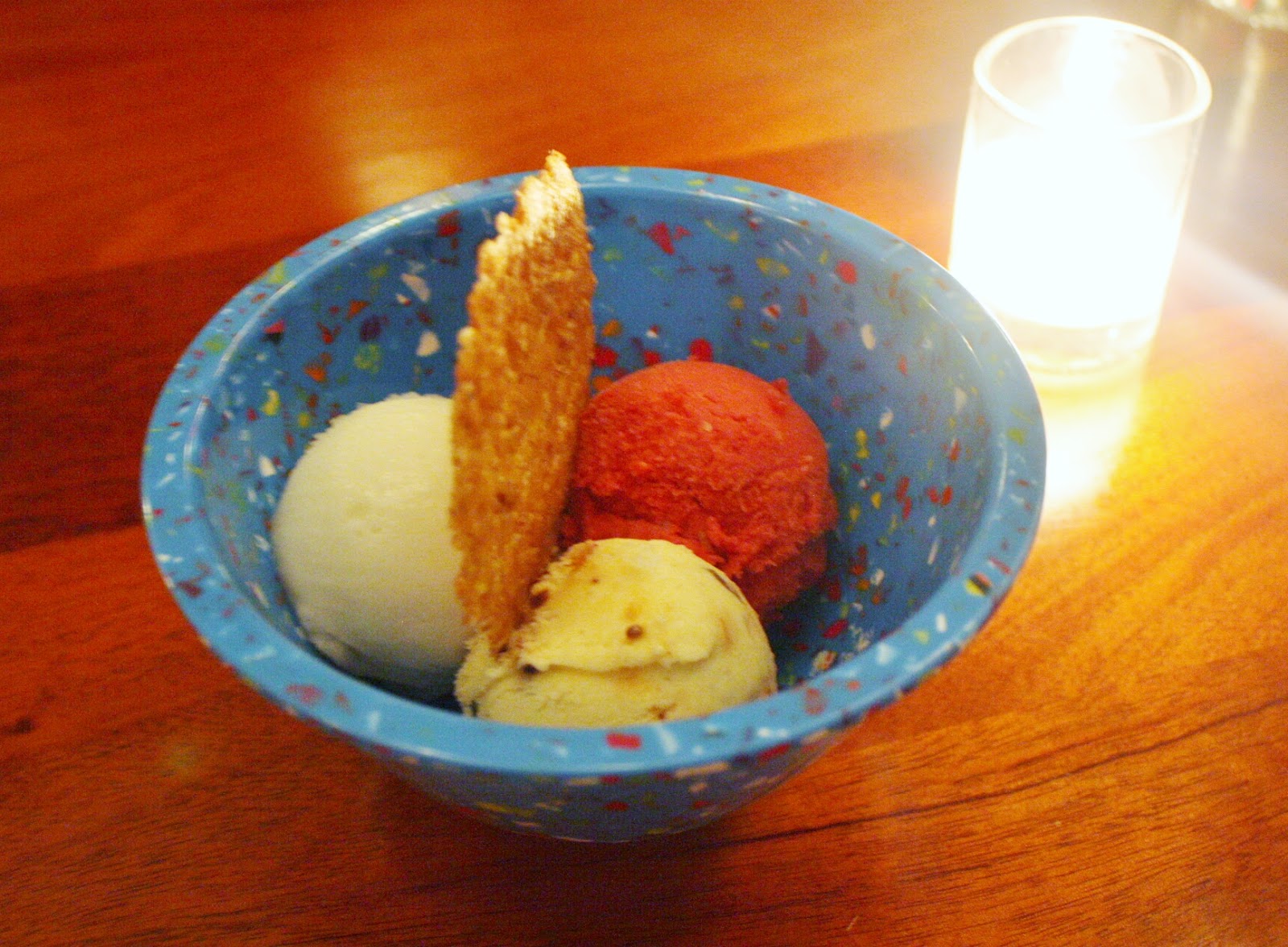 I literally can not say a single bad word about my experience at La Calaca- although I do think the waitress was incorrect in saying this was too much food.  We packed up a single taco and half an enchilada, but otherwise, it was a lengthy and enjoyable meal where we savored every bite.  Craig LaBan's 3 Bells are well-deserved.  My only question is.. when can I go back??