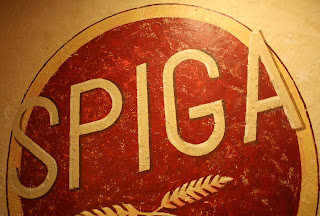 CityEats was also generous enough to provide us with a little incentive to head over to Spiga to check it out for ourselves! To be honest, it wasn't real high on my list after receiving some rather unfavorable reviews.  However, after getting to taste an awesome burger from the Italian restaurant, I knew I should give it a chance. 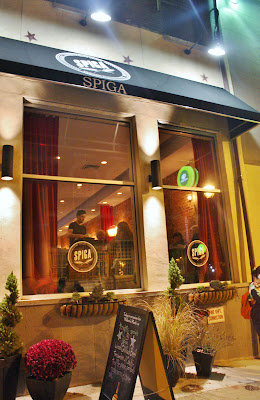 Spiga is run by a couple guys from Le Castagne, a staple in Rittenhouse Square for more traditional Northern Italian cuisine.  Spiga, with its brick, leather, and red velvet interior, sets an upscale scene for its more "modern" menu.  However, a baseball game on TV at the bar as well as the grouping of patrons in the glass-and-brick lined front area made it a bit louder than I'm used to, especially for a mid-week dinner.  Crap, I must be getting old.  But really, who likes raising their voice to speak to their dining mates? The service was hit-or-miss; our waitress checked in on us plenty of times, but she seemed to magically disappear when we actually needed something.
The menu was also slightly different than the one posted on CityEats (and on our blog!), with the antipasti option replaced by a handful of pizzas.  We tried to order a variety of menu items to get a good feel for what the kitchen had to offer.  A little bucket of bread- likened to Gumby's Pizza's Pokey Stix- was served right away.  A basic pizza dough coated with a sprinkle of cheese and herbs- quite addicting. 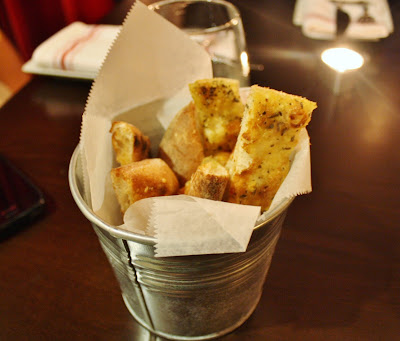 A & I tried to leave the breadstick eating to her new husband, since the two of us decided to split a pizza as an appetizer.  We easily agreed on the fig mostarda, Gorgonzola, and prosciutto offering ($14).  A thin crust pie with a classic pairing of quality ingredients made a good snack (and a great lunch the next day!) but we weren't overwhelmingly impressed.  We've been so impressed with other pizzas in the city recently that this flat, unbubbled crust just didn't measure up. 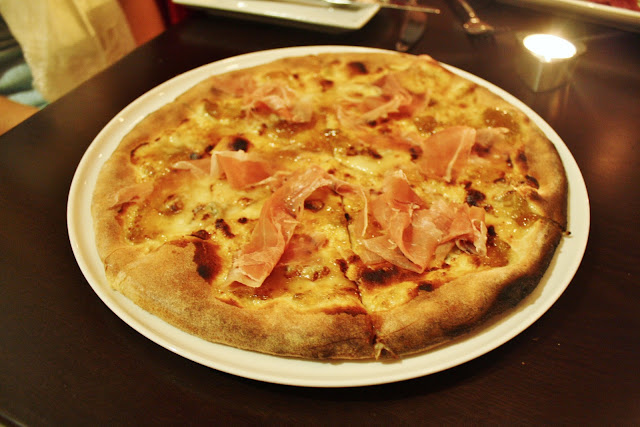 The chef's selection of charcuterie was a better bet (and a better deal at $13!), with an enjoyable array of meats including speck, soppresata, and capicola.  Olives, a sweet onion jam, and lightly pickled vegetables rounded out the plate.  We thought the speck here and the prosciutto on the pizza looked suspiciously similar, but A conducted a not very scientific taste test and decided otherwise.  Although the meats here aren't house made as is the rising trend in this city, the "chef's selections" were still quite good. 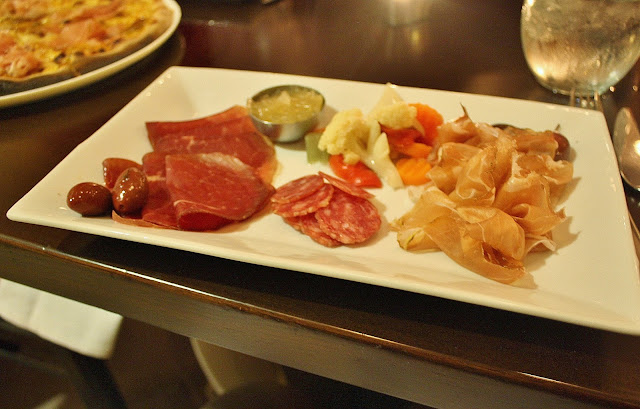 Since I can only use my marathon as an excuse for carb-loading for three more days, I took advantage of the upcoming race and ordered the cavatelli ($16).  The mini-hotdog bun shaped pasta might be my new favorite type of pasta; unfortunately it seemed as if the pasta wasn't completely drained before being tossed with the remaining ingredients- it was just a little watery.  A few chunks of slow cooked oxtail were extra-savory and well balanced by the bright herbs and lemon zest coating each piece of pasta.  Can a girl get a few vegetables? 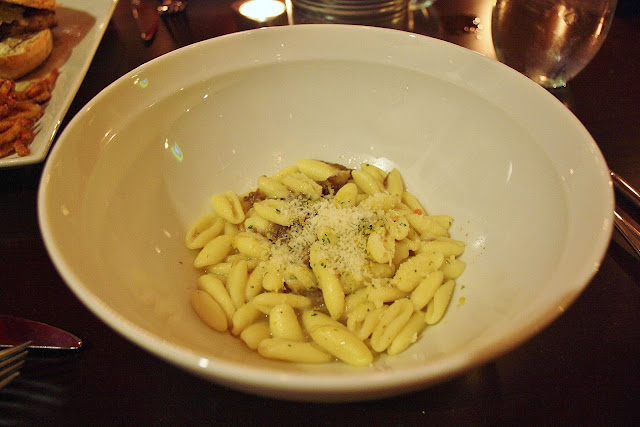 A was sold on my burger-ravings and decided to try it out for herself ($12). A thick puck of beef was unfortunately slipping off its bed of creamy goat cheese and creating a pool of greasy juice on the plate- which almost immediately was being soaked up by the bottom bun (of the slightly sweet, fluffy wheat variety).  Regardless, the bacon, sauteed spinach, and sweet onion mostarda created that same tasty combination that I remembered. 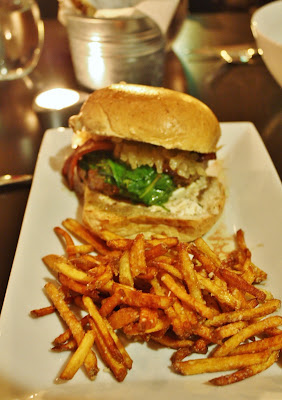 The fries were cut into tiny matchsticks and had a thick, crunchy exterior.  I personally prefer a bit more of the steamy insides myself.

The third in our trio (is this blog going to become Three Eat Philly??) continued the meaty trend with the stuffed pork chop ($24).  A thick, bone-in chop was split open and grilled to a nice medium and then stuffed with... nothing?  An accompanying pile of "peperonata" had no peppers or onions to speak of, instead offering a simple mix of lightly sauteed zuchhini and carrots.  A creamy pecorino cheese sauce added some pizazz to the dish; without it, it would be a very simple pork chop with veggies.  I can make that at home, for far less than $24. 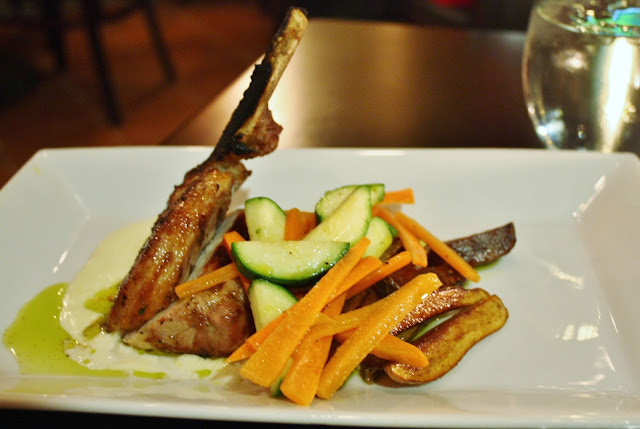 Adam Erace raved about the tiramisu cheesecake as a redemptive dish, so we figured it must be worth a try ourselves ($8).  However, ours seemed a bit different from the version he described.  An odd, slightly soggy graham cracker crust was topped with a layer of dense cheesecake- this tier was terrific.  Thick and creamy, with a hint of vanilla, the slightly sweet cake was well-balanced by a sprinkle of bitter cocoa and powdered sugar.  A coffee-infused whipped topping and drizzle of caramel completed the tiramisu flavor profile- a decent "reconstructed" dessert. 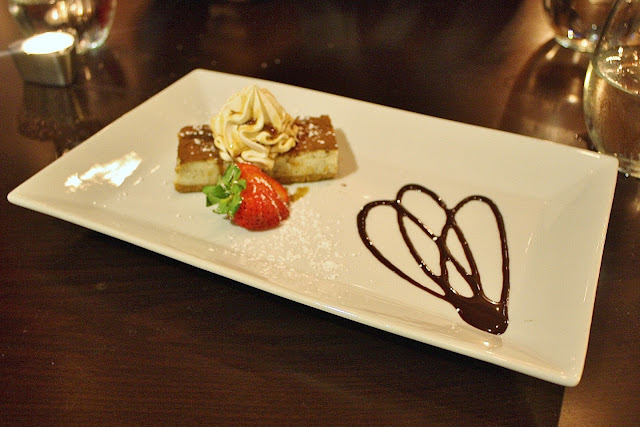 We can definitely see where critics are coming from in the sense that Spiga doesn't hold its own amongst other Italian restaurants in the city.  Considering its location in hot-spot Midtown Village, the chefs need to step up their game if they want to compete.  Overall, the dishes just didn't have much inspiration and were... well, boring.  However, our meal was never less than pleasant dining experience, and we owe many thanks to CityEats for footing part of the bill!