I'm back!  And life at Two Eat Philly goes on-- just one of us has a new last name.  I'd like to recap the food aspects of the wedding celebrations in a few posts (some of which may be written at a later date after photos begin to roll in).  The weekend started off with our rehearsal dinner, which was held at Supper.  During the early parts of our engagement, I imagined a small, intimate wedding reception at one of our favorite restaurants, and contemplated contacting Supper for the job.  When it became clear we would have far too many guests for a restaurant wedding, I still wanted to make this restaurant part of our celebrations.

While a few other restaurants I contacted quoted me outrageous per person or per group minimums, the representative at Supper (hi, Molly!) worked with my budget and offered us the Restaurant Week prices for a three course dinner.  Even though it turned out that our rehearsal dinner date didn't fall during the official RW, she still honored the reduced price.  Choosing two options for each course turned out to be the most difficult part of the planning process with her-- they all sounded amazing! 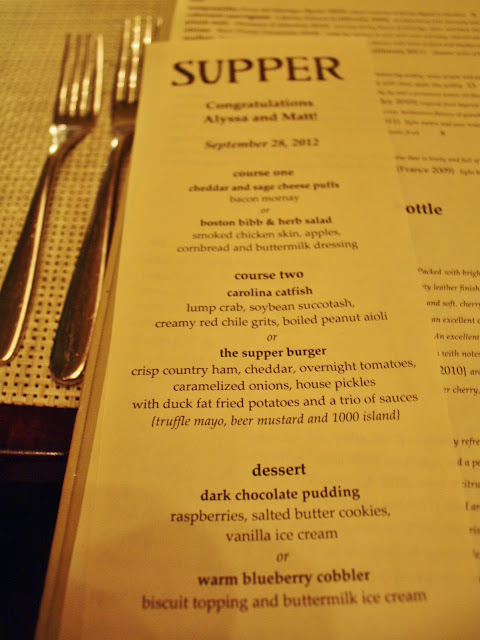 We were seated upstairs along the wall, with half of our group at one table and half at another.  The long, family style seating wasn't conducive for keeping conversation amongst the entire group of twenty, but... it was the style of seating I chose for my wedding, so I liked it!

The personalized menus were a cute touch, although I know it's commonplace in many restaurants.  I wouldn't say that the service was above and beyond what Supper usually provides, just the basics but always there when you need them.

While choosing the menu options, J prompted me to choose one option that my fiance would eat, and one that I would eat (anyone who has been a long-time reader knows we're compatible everywhere except the kitchen- but I'm slowly working on that!).  The "his" and "her" choices began with the first course, and more of our guests went with the "his" choice- can't blame them.  Cheddar and sage cheese puffs are like little savory cream puffs- filled with a touch of melted cheese and laid atop a creamy mornay sauce with a rich bacon flavor. 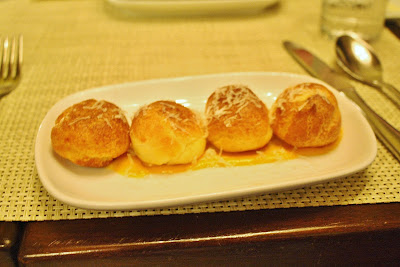 The "her" choice was right up my alley- and as the bride, I clearly get everything I want, right? (Speaking of which, how long does this fact last after the wedding...?)  The salad option isn't just a pile of boring lettuce though- freshly picked lettuces and whole-leaf herbs are tossed in a creamy, tangy buttermilk dressing and laid atop thinly sliced apples and some crunchy pieces of fried chicken skin (you know, those chewy, greasy bits that are the best part).  There was also a large cornbread "crouton" that fit my definition of a hush puppy- fried to a crisp on the outside but dense and creamy on the inside. 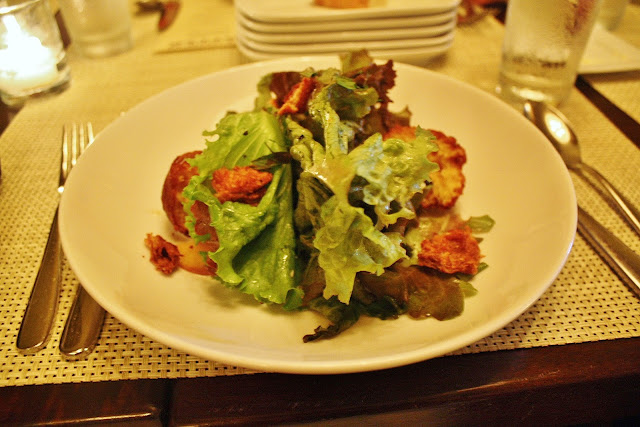 The two entrees actually stuck closely to the general themes of the first course, providing an option of classic American flavors with the famous Supper Burger, or a lighter, Southern-inspired choice of the Carolina Catfish.  For an extensive, so-many-more-details-than-you-wanted look at the burger, check out our review.  To spare those of you who have already been through that before, I'll leave out a glimpse of it here.  I will say that nobody who ordered the burger regretted it-- and several who didn't order the burger did.

However, their regrets were only passing, as the catfish certainly didn't disappoint.  The base of the dish consisted of a small scoop of spicy red chile grits.  I loved all of the Southern nods throughout the meal, with the grits perhaps being my favorite bites of the evening.  A soybean-corn succotash is topped with a few bits of lump crab meat, lending an extra seafood flavor to the dish.  The word "catfish" may scare some of you off, but the offensive-on-the-outside animal tastes rather mild.  It's similar to grouper, with slightly more flavor than tilapia and the like.  The piece de resistance on the dish was the smear on the back of the plate-- my dad kept asking the waiter quite seriously why his plate was dirty (a joke that you might only catch if you know my father).  One finger lickin' taste and he was hoping for more-- boiled peanuts pureed and spread into a sauce.  Genius! 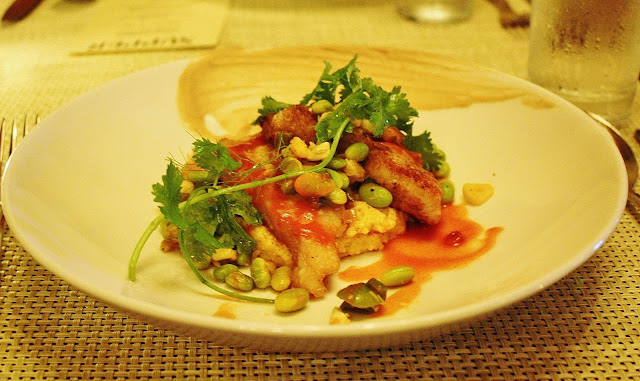 After distributing gifts and spending some time chatting with those at the other end of the table, we dove into dessert.  This time there wasn't really a his and her's option, since I wanted to eat all of them!  However, I went with the Dark Chocolate Pudding, because I knew that Supper wouldn't be serving up the Jell-O variety.  The pudding was essentially the thickest, richest, fudgiest chocolate mousse I've ever tasted- and the unbelievably large serving was impossible to conquer.  The top layers were balanced well with a classic vanilla ice cream and a few fresh raspberries, but once the spoonfuls became straight pudding, I alternated between moans of delight and defeat.  The tiny butter cookies served on the side went straight to my husband-to-be -- this was seriously like fourteen desserts in one! While I didn't get to try the blueberry cobbler, there's pretty much no chance it wasn't a delicious dessert.  Another Southern-influenced dish, fresh warm blueberries, buttery sweet biscuit and buttermilk ice cream can do no wrong. 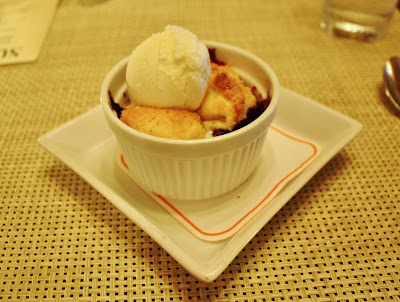 The evening was a perfect end to the last minute craziness of the week leading up to the wedding, and an amazing start to a weekend full of love, joy, and of course, good food.  Thank you to the team at Supper for making my rehearsal dinner a memorable one!
Posted by A and J at 7:51 PM