Last week we were invited to a special dinner event hosted by Knob Creek, one of a dozen dinners they are holding around the country to promote their brand.  Even though the featured restaurant was Meritage (one of my favorite spots in the city!), I turned down the invitation since I have no (actually, negative) interest in bourbon.  However, the lovely PR rep persuaded me to give it a chance- and I couldn't say no to an offer of what was sure to be a delicious dinner gratis.  The dinner featured an amuse bouche and four courses, all of which used bourbon as a flavor component. 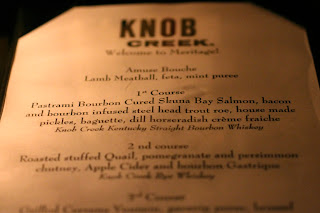 Each course was served with a different bourbon, and an expert from Knob Creek was on hand to tell the diners about the product, as well as give lots of historical information (Knob Creek was the name of the farm Abraham Lincoln grew up on!) and some fun facts from the business.  It was an entertaining evening and the food was amazing- each course highlighting Chef Anne Coll's expertise with a variety of meats and preparation styles.  The bourbon flavor was absent in the food (thankfully?) but I'm positive it was one of those extra special components that is impossible to pick out but absolutely necessary for the final presentation.

Our amuse bouche was a lamb meatball.  A unique way to start the meal-- a higher end meat served poor man's style.  Of course, it was no ordinary meatball, with a light mint dressing and a creamy feta and pepper sauce.  The tenderness of the meat actually really lends itself to grinding (there should probably be more lamb burgers in existence). 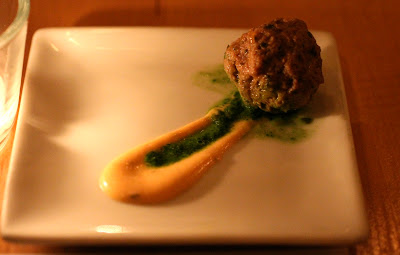 When I first viewed the menu, I was most excited for the second course, since the words "cured salmon," "bacon," "roe," and "pickles" were all together in one dish.  I mean, really.  Does Chef Coll view my food dreams?

Interestingly, bourbon played two roles in this dish.  The salmon was cured pastrami style, with a hint of rich smokiness in the flavors of the light crust.  The natural smoked essence of pastrami was really pulled out by the bourbon- I guess nine years in a burnt wood barrel does that!  The trout roe was also prepared with bacon and bourbon, balancing their saltiness with a bit of woodsy richness.  I had a hard time not putting those thin slices of salmon directly into my face, but the thin toasted baguette and the dill infused creme fraiche weren't bad companions- and by that, I mean they were perfect (the pickles DID go straight into my face). 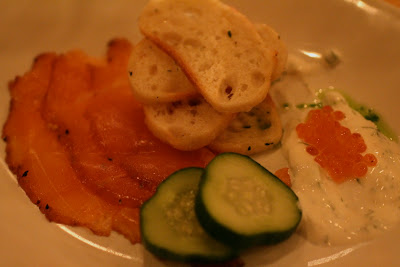 The dinner slowly moved to heartier dishes, with the second course being the most visually appealing.  A tiny quail was served whole (although with no bones present except in each miniature leg) with a hidden sweet bread stuffing.  A bed of spinach was the lone vegetable in the dish- the two sauces were both fruit based.  A chunky chutney of persimmons and pomegranate was dressed with an apple cider gastrique.  Um... gastrique?  Caramelized sugar deglazed with vinegar- which accurately describes the flavor of the sauce.  However, bourbon again provided the balance to the flavor profile- alone, this may have been too sweet and sour.  It was a fun dish to look at, but a little odd to eat- fork and knife or finger food? 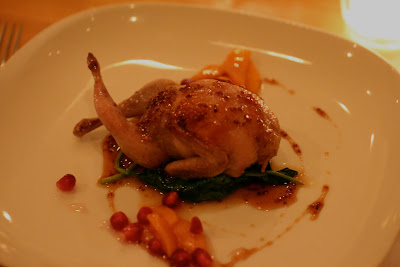 The final meat course was what everyone in the restaurant was raving about at the night's end.  Perfectly prepared venison- I had no idea game could be that tender, but this venison was as soft as filet mignon (apparently it was a particular "brand" of meat famous for this quality).  Cooked to a perfect medium rare and sliced into perfect rounds, I would like to return to Meritage for this alone.  The parsnip puree and brussels sprout accompaniments were also much enjoyed (my husband thought the parsnip was mashed potatoes it was so smooth!). 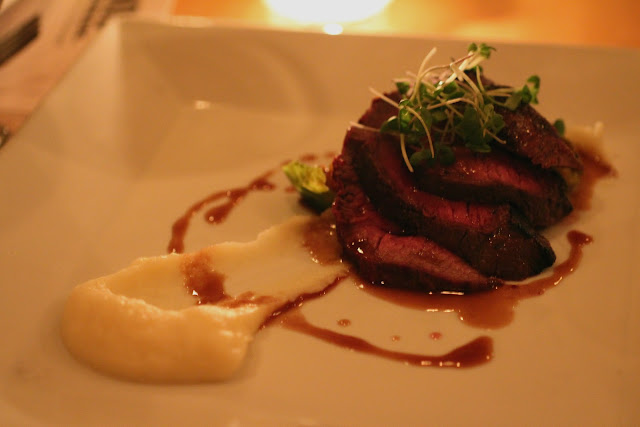 One of our table mates for the evening happened to be the one in charge of organizing and planning each of the dinners in The Standard series (and yes, she gets to eat them all!), and she made several comments that stuck with me from that night.  First, she was thrilled that the meal was not intensely heavy- the venison was prepared in such a way (and served in a reasonable portion) that even a red meat course was better than "beef cheeks or pork belly," apparently the heavier meats of choice of many of the other featured restaurants.  By the time dessert was served, I was pleasantly full but still ready for a few bites of sweetness.

A sweet potato bourbon bread pudding was coated in a walnut-maple glaze and served with a pool of salted caramel- a true Southern-inspired dessert.  Again, the flavors of the rich dessert lent itself to the smoky richness that bourbon imparts- rendering the sweetness much more palatable.  A little vanilla ice cream and a sliver of chocolate allowed this dish to cover pretty much every popular flavor of dessert without overwhelming it. 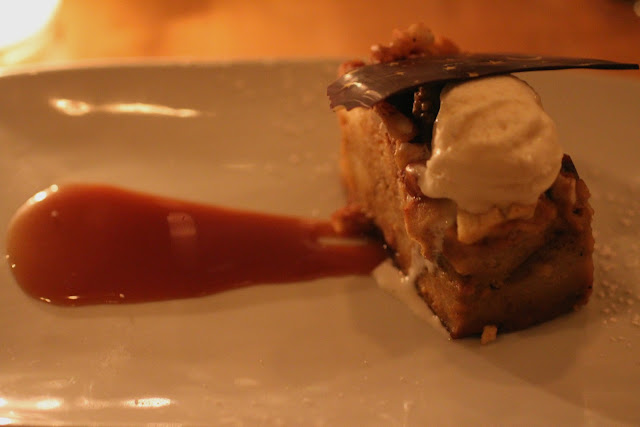 Our tablemate also praised Meritage for its excellent food- there is no doubt that Chef Coll beautifully displayed the dining scene that Philadelphia has to offer, as well as highlighting exactly what Knob Creek was looking for- a meal and a restaurant that is raising the standard of fine dining.  While Meritage doesn't get as much day to day press as some of the shinier new restaurants, it is surely holding its own as a neighborhood restaurant turning out some spectacular and inventive meals.

If you think these dishes sound good, you have the chance to try them yourself this week (December 5th-December 7th) for just $39 at Meritage.  I'm almost tempted to go back and eat them all again!
Posted by A and J at 9:30 AM