February's Burger Club meeting seemed to come up extra fast due to the short month- something we certainly weren't going to complain about since we were looking forward to our first encounter with Ela.  While we may have semi-stalked Chef Jason Cichonski, resident kitchen hottie at Ela, at last summer's FEASTIVAL event, we hadn't yet had a chance to try his restaurant.  A bit different than our typical Burger Club meeting spots (which tend to be large, bar-centric spots since these can fit a large group and usually have a solid burger), Ela is more upscale and gourmet. 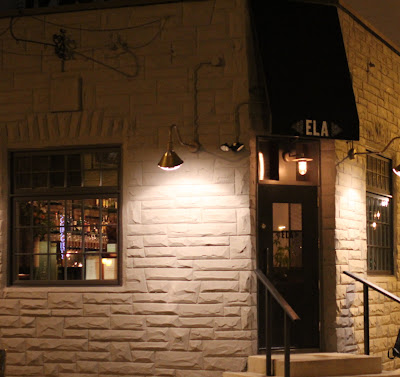 Located in prime real estate right off of South Street in Queen Village, the restaurant is actually much larger than I imagined.  The regular menu has a concise list of appetizers and entrees, which doesn't include the burger.  Actually, the burger is a special item on the bar menu, and is produced in a very limited quantity each night.  Nothing like making your burger a bit exclusive to drum up some attention.  However, Ela agreed to produce more burgers just for us.  Or, more than the typical ten, at least. 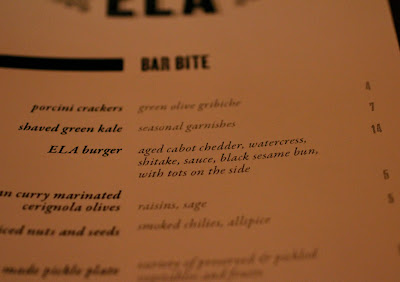 Unfortunately, the hostess and waiters didn't seem thrilled to have us for the evening, and relegated us to either the back room (with only four tables) or the bar area.  Since they knew we would have 30+ attendees, it seemed a bit odd.  Even worse, once our group reached 29 (yes, 29), the hostess refused to allow any more burger-seekers.  She would "allow" us to eat from the regular menu in the dining room, but obviously that's not what we wanted.  We were sad to see several small groups turned away.

The waitresses were slow to take drink orders and even slower to ask our meat temperature preference. But, the wait for the kitchen was almost unbearable.  We typically meet at 7PM and are wrapping up by 8PM- it's just a bunch of burgers.  However, we waited until almost 8PM just to be served- by which time I think there was a good deal of hanger abounding.

On arrival the burger looked great- a decent sized patty, an adorable bun and some good melty cheese.  However, there were a LOT of grumbles about the "tots" served on the side- averaging about ten fried potato cubes.  Didn't matter much to me- I'm there for the burger not the sides- but many in our group weren't thrilled.  I actually can't even comment on their tastiness as I donated all to my sad hungry husband. 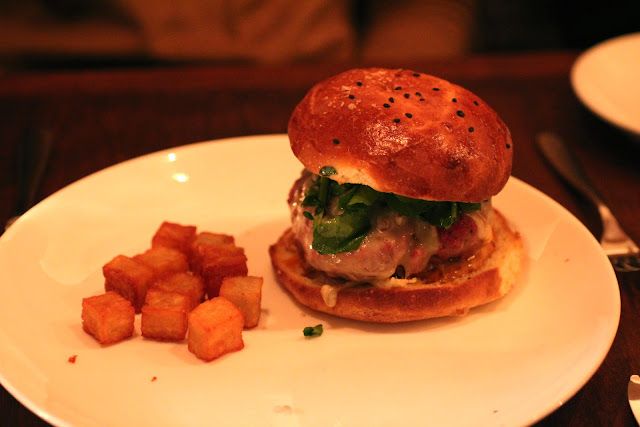 Now, on to the burger critique.  A housemade black sesame bun was wonderful- soft on the inside but a crispy exterior, with a smooth, shiny (eggwash?) glaze.  It was really perfect in containing the meat, holding up well to the thick patty.  The accompaniments include a small pile of watercress, some melty sharp Cabot cheddar, a few sauteed shiitakes, and "sauce."  Yup, just sauce.  According to Cichonski, it's made with "like, 400,000 ingredients."  We can tell you one thing- it has a very Asian profile. 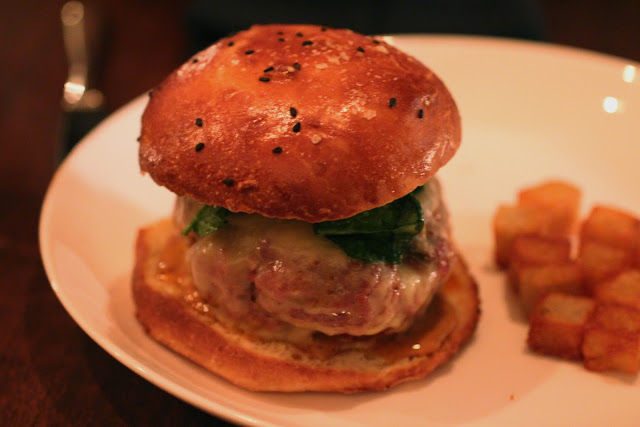 The meat-- I can only say I'm still stumped about both the color and the texture.  Half of our group was panicking because of the color-- almost bright red, regardless of what the cooking temperature request.  The rawer the better, in my opinion, but some of us are scared of raw ground beef (for good reason), and weren't up for eating a patty of beef tartare.  However, apparently the "sauce" is mixed into the house ground beef, providing this coloring that doesn't disappear with more time on the grill. 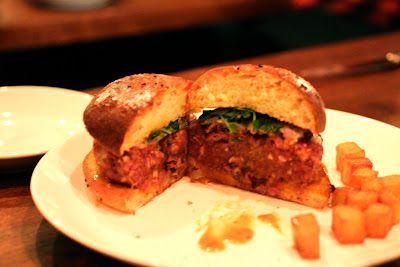 After eating half the burger, I finally put my finger on the patty texture.  Hot dogs.  Chopped up hot dogs.  Sort of chewy.. with a slight rubberiness.  After proclaiming this to my table, I think I ruined their next few bites.  Sorry!  It didn't necessarily detract from the overall experience, but it was just weird.  Should this burger be on everyone's must eat list?  No.  Was it different from anything else we've had?  Definitely.  However, our overall experience with the staff at Ela, along with the sad limit of 29 burgers, has most of us hesitant to return to try the regular menu.