Yes, we're on a seafood kick.  No, we're not sorry.  All day buck-a-shuck's drew us to Doc Magrogan's Oyster House in University City, a surprisingly sprawling restaurant with cushy dining rooms and bars tucked in and around every corner.  Online reviews lowered my expectations for service, but our super sweet waitress gave us top-notch attention- if only the kitchen hadn't been noticeably slow with our entrees.

We started out with a basket of hot (and oddly flat) rolls, which absorbed a smear of butter like a sponge.  Requisite oyster crackers and horseradish were also supplied- love those crunchy little biscuits.

I was really there for $1 oysters, so I placed an order for six and let our waitress choose for me.  Doc's offers a rotating variety- on this particular night there were 13 types, each listed with their originating location, size, and general tasting notes.  I'm no oyster connoisseur, but I enjoyed trying and comparing as many as I could.  My favorite were the Stingrays, a medium-sized sweet and salty oyster from the Chesapeake Bay.  A little splash of mignonette and a squeeze of lemon brightened the flavors of a few, but these were good enough to eat plain.  My one complaint was a little bit of grit in two or three of the oysters. 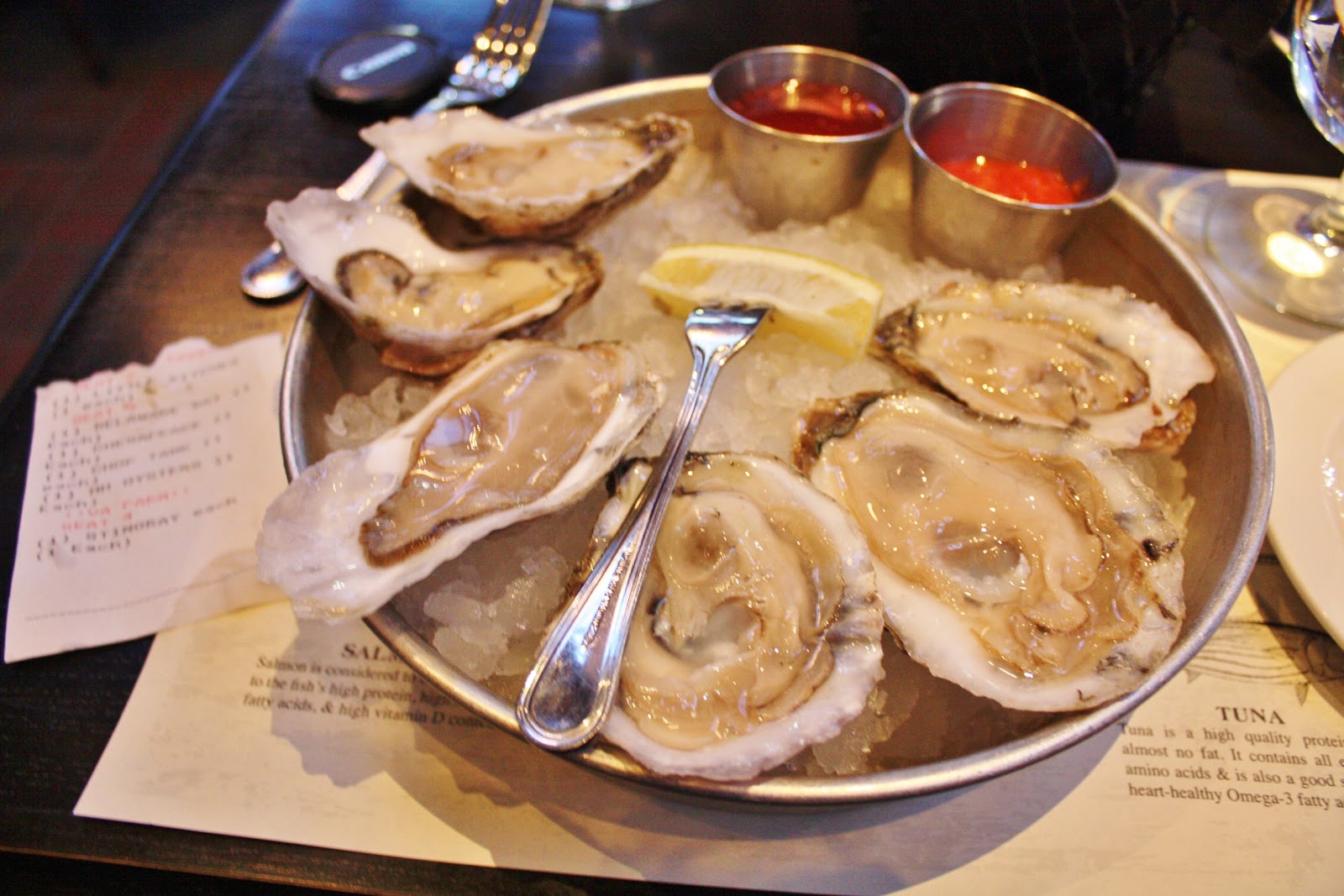 A also started with 6 oysters, choosing three Cape May Salts and three of another large, salty variety.  Apparently she prefers size over flavor- but since not everyone enjoys a mouthful of slimy bivalves, it's great that Doc's provides a substantial selection. 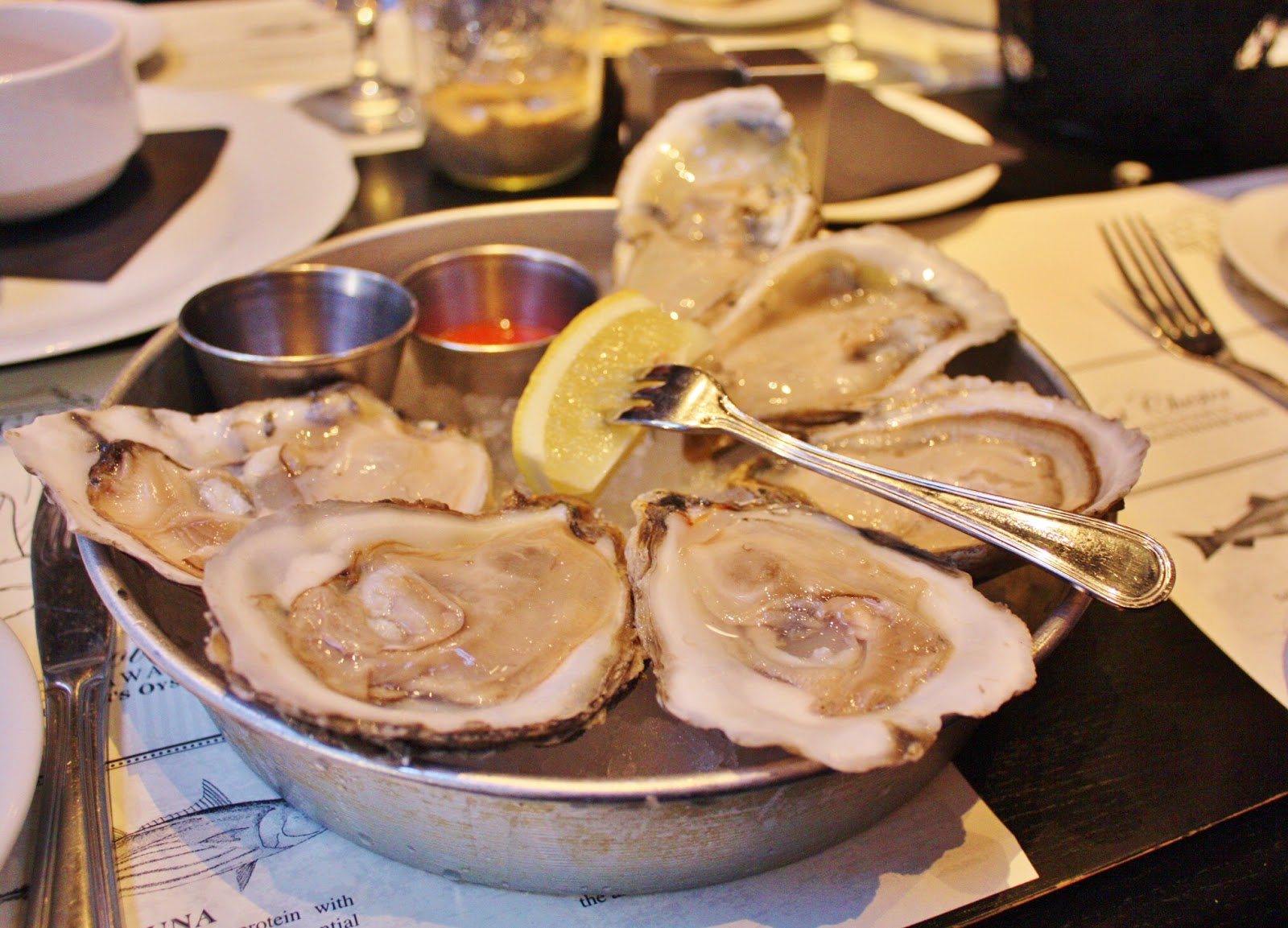 We also split an appetizer of orange sesame shrimp (~$11- estimating prices here).  Small, lightly battered shrimp are tossed in a citrus-y, sweet and sour glaze- great texture, great bite, and bright flavors.  The "Asian slaw" underneath was questionable- a little more sauce would have made it into a mini-salad, but without, it was almost a garnish.  Crispy wonton strips added some crunch. 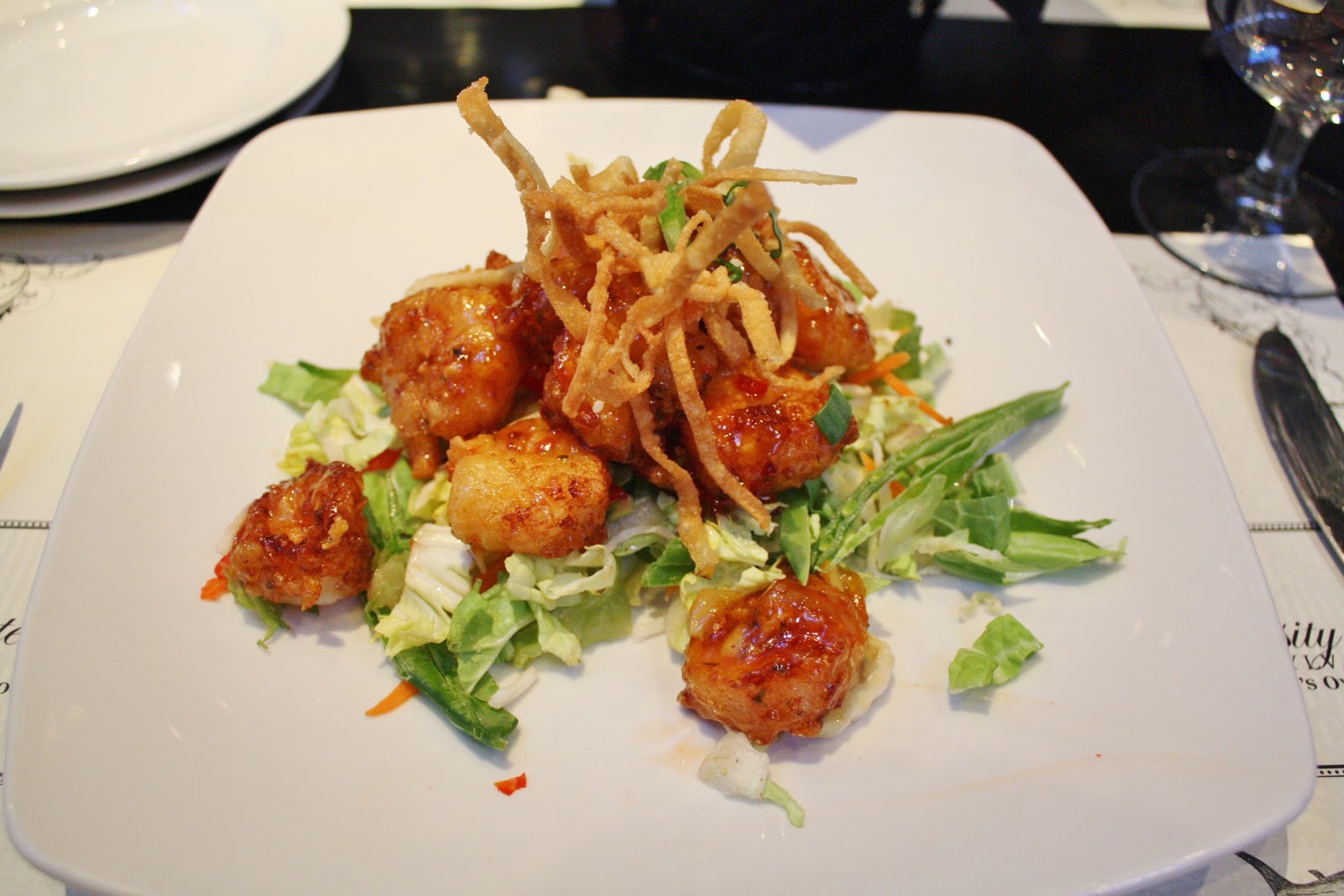 I was coming off a weekend at home eating all my favorite foods, so I opted to go light for my entree- the Ahi Tuna salad ($17).  This was a play on a Nicoise, with cold red bliss potatoes, raw green beans, chopped roasted red peppers, and some kalamata olives.  The tuna itself couldn't have totaled more than three or four ounces and honestly didn't have much flavor, seeming almost completely unseasoned.  A light lemon-herb vinaigrette was also hardly noticeable.  While I appreciated the concept of this salad, it just didn't meld into anything special- maybe because I actually had to mix the components together myself.  I told A later that I would have enjoyed 17 more oysters much, much more. 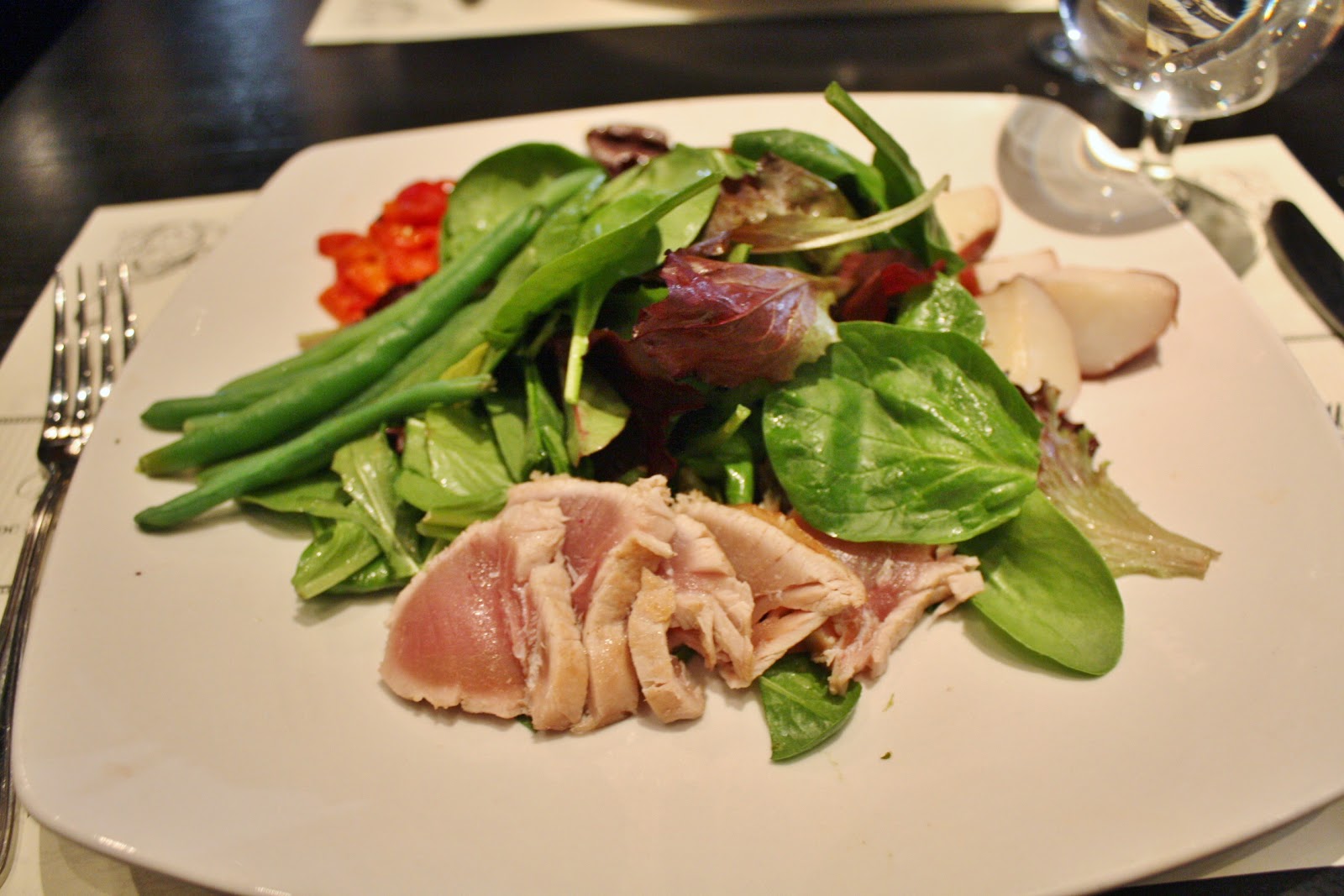 The brother-in-law is our designated burger try-er (always seeking out new Burger Club meeting places!). Doc's Old Bay Burger (~$15) is served with a melty layer of Monterey Jack cheese, a small pile of corn-and-crab salsa, and two enormous "crispy crab chips."  The burger clearly can not be eaten with the chips (unless you have an unhingeable jaw), but the chips were a fun touch- super crunchy with a discernible seafood flavor.  The thin patty  is seasoned with Old Bay and wood-grilled, providing a super flavorful exterior that masked the more delicate crab.  A toasted sesame bun earned top scores, but the fries were nothing special. 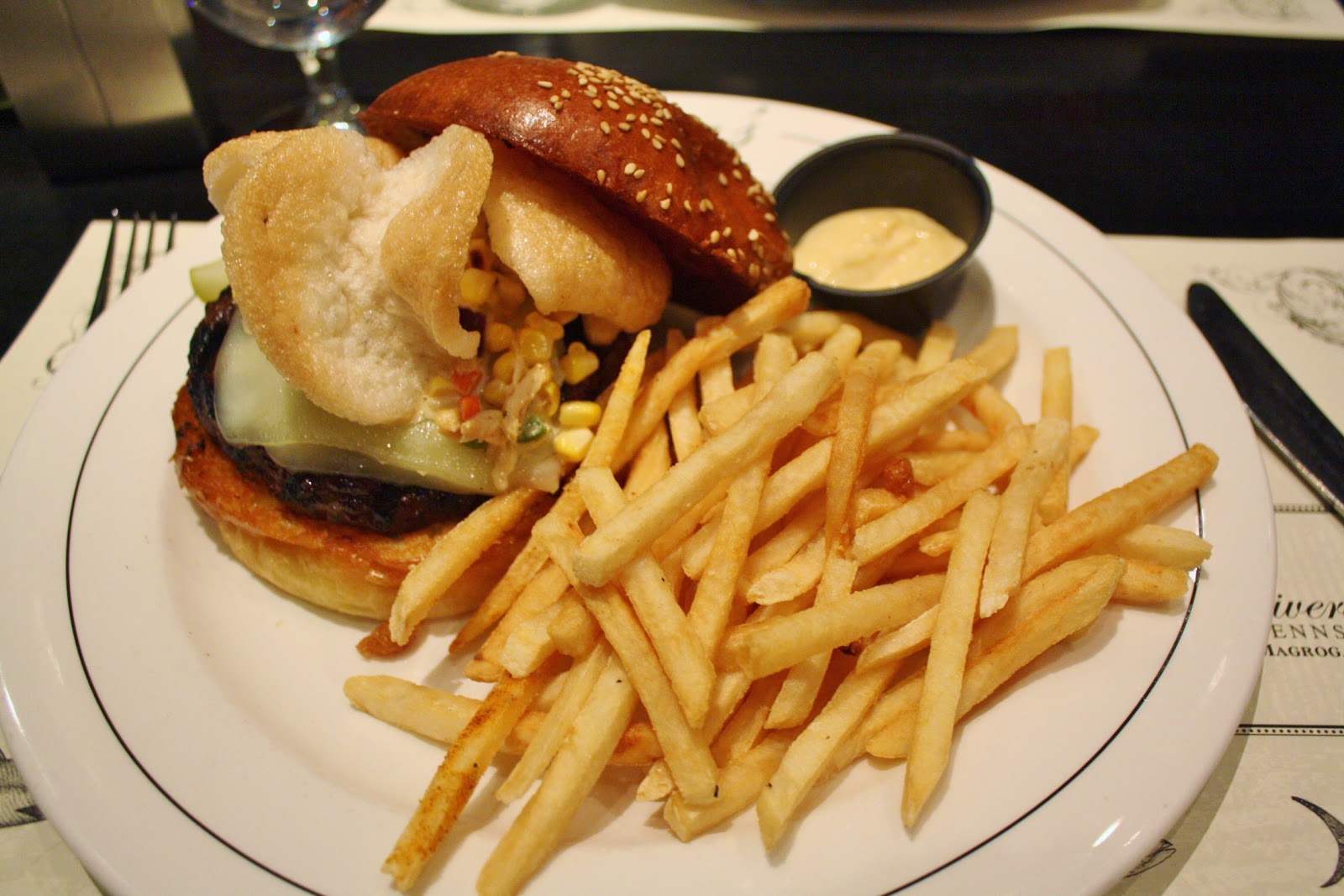 A made a much better decision with the Grilled Seafood Cobb Salad ($18).  Mixed greens, tomatoes, avocado, and hard-boiled egg formed the quintessential Cobb base, but the addition of shrimp, scallops, a chunk of salmon, and an ounce or two of crabmeat actually reflected the high price tag.  Creamy lemon-herb dressing on the side was only needed sparingly. 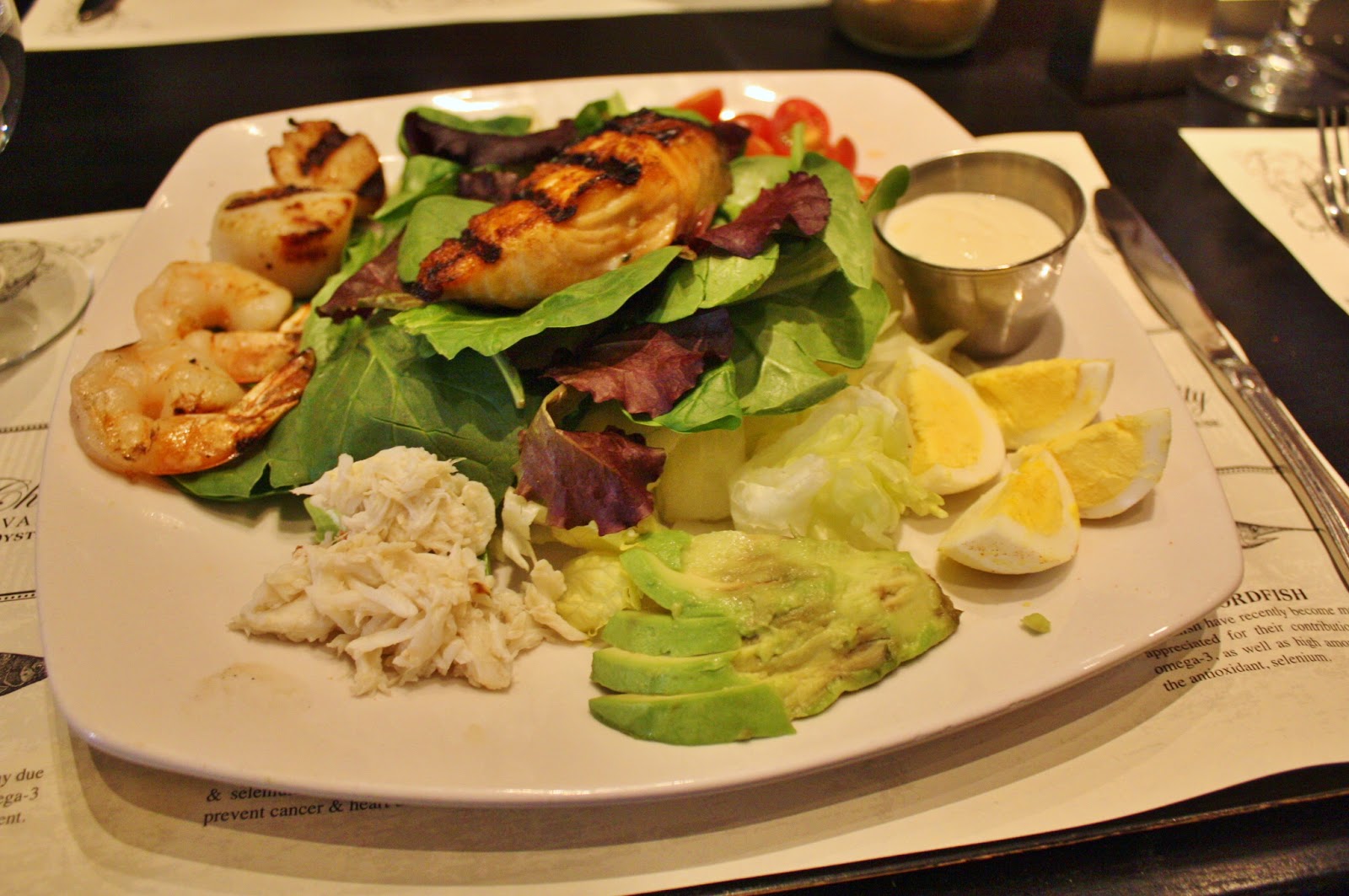 Another salad rounded out the entrees- our friend has been to Doc's before and has developed a love for their Salmon & Baby Spinach salad ($16).  I was the fortunate recipient of her goat cheese (which helped save my own salad), but the simple mix of spinach, pickled onions, and dried cherries are a great match for grilled Atlantic salmon. 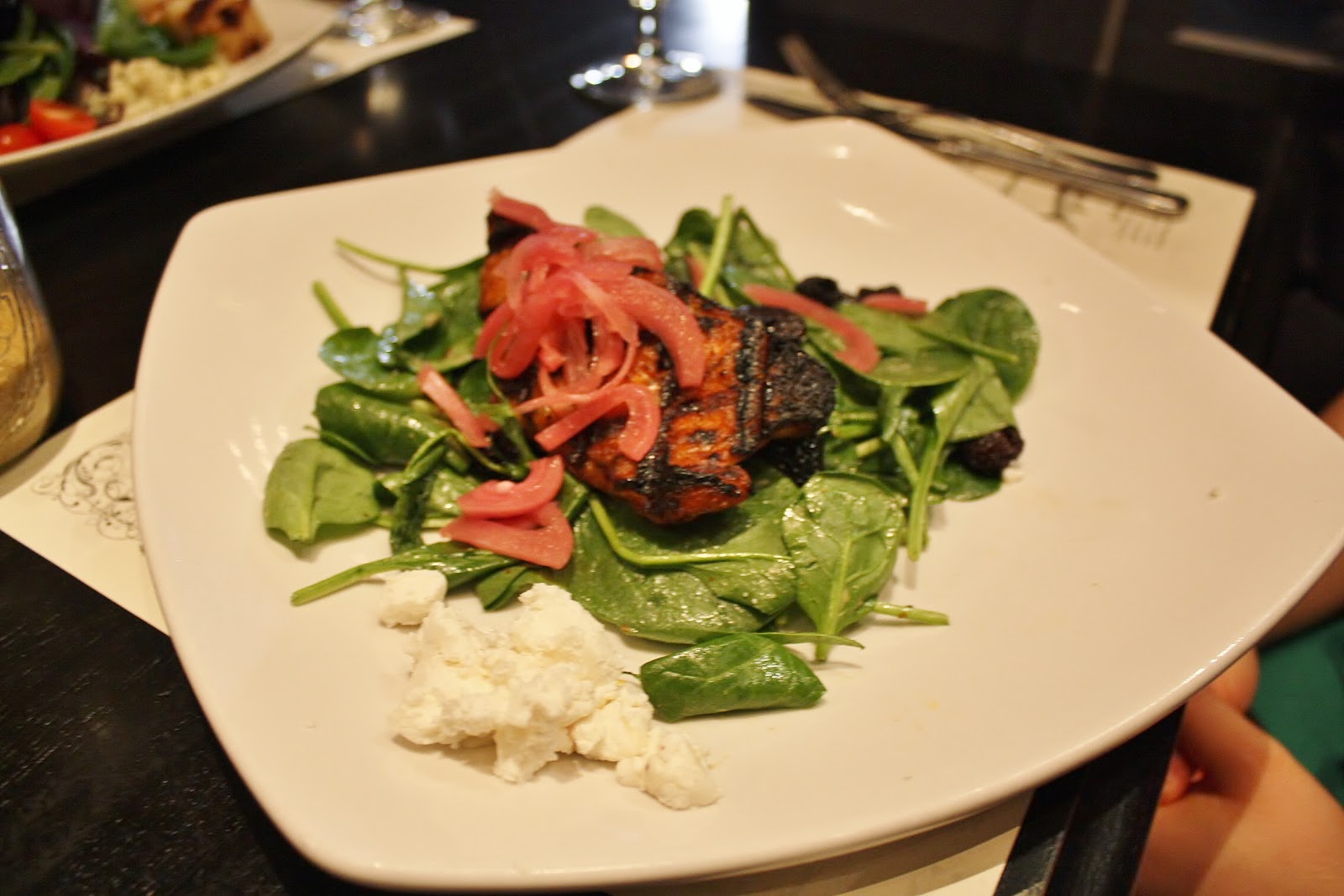 I really wanted to love Doc's- our waitress was great, the space is cozy and fun, and oysters for a dollar are always a plus in my book.  However, I definitely agree with the general consensus that it is over-priced and the wait was questionably long for a few salads and a burger.  But really, I always need more oysters in my life, so I'm sure I'll be back for those!