We've recently been on a roll with seafood spots around the city.  A little odd, since none of them are new, just new to us!  The same weekend as our four course feast at Little Fish, we also had a belated birthday dinner with my other family (also known as the in-laws).  We often dine around my husband's hometown north of Philly, but I requested a meal closer to us.  Route 6 seemed like a perfect fit- easy to fit a group, relatively easy to find nearby parking, and a fun place to eat.

It looks pretty industrial from the outside, but the inside is warm and full of nautical touches- I actually was really obsessed with all the little details, including the full sails acting as window covers inside.  We had a perfect corner booth, great for conversation and sharing food, not so great for the waitress trying to reach to those of us at the back.  The menu is full of fun twists on classic seafood, with plenty of "must haves" including a huge raw bar selection.

We started with a few appetizers for the table, including one of our perennial favorites, calamari.  Route 6's version is the Fried Judith Point Calamari ($10).  Apparently Judith Point (or Point Judith?) is in Narragansett, Rhode Island, so assumedly this is the origin of the squid.  A solid rendition, with lots of battered and fried jalapeño pieces mixed throughout (obviously, my favorite).  The sauce was more tomato based than tangy cocktail sauce, which was sad since I'm a sucker for the classic version. 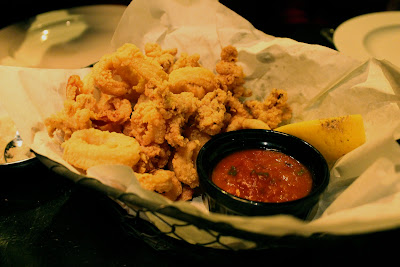 My contribution to the appetizer selections was a special of the day, fresh salmon tartare ($12).  The tartare was shaved into small pieces and arranged as a disc with a celery leaf salad with capers and a citrus vinaigrette.  One of my favorite dishes of the night, for sure, since it was really light and fresh- what I prefer in a seafood dinner as opposed to heavy/fried (don't get me wrong, love that calamari).  A few small pieces of grilled bread served as great vehicles for the fresh fish. 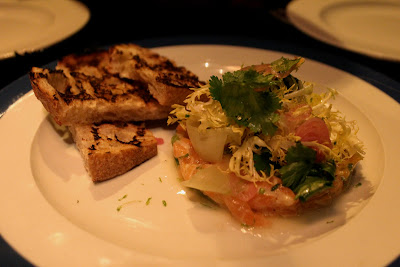 Our final shared plate were the Crispy Maryland Crab "Bombs" ($13), which I really think need to become a bar food menu staple (but only in restaurants that can handle fresh seafood, please).  Essentially little cheesy crab cakes formed into balls and fried... what exactly is not to like?  A few more to an order, maybe? 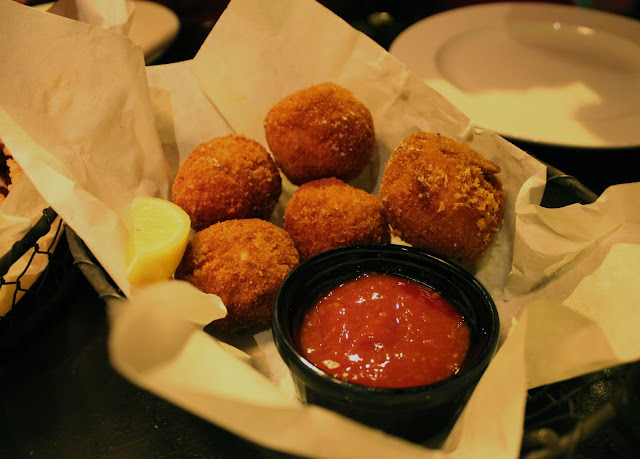 Almost the entire table ordered from the "Wood-Fired" section of the menu, with a few orders of the salmon and swordfish, and a plate of scallops (which I didn't try or catch a picture of but they looked fantastic).  I can never fill my salmon quota but at least attempted to, especially as it's served with a horseradish vinaigrette ($19).  A generous piece of thick cut fish with a crisped skin exterior and a barely pink interior (perhaps could have used a little MORE pink?), with the spicy horseradish very complementary to the fatty salmon. 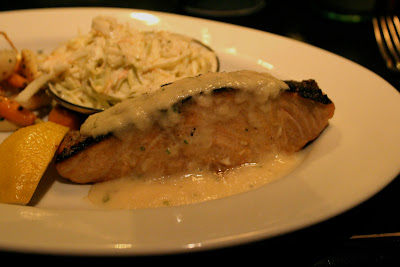 The wood-fired options come with two sides out of a selection of eight, most of which are a bit different than you'd expect (curried carrots, anyone?).  I chose the house coleslaw and the roasted root vegetables, both of which were solid.  The coleslaw had a good balance of mayo and vinegar, while the vegetables (carrots, parsnips, potatoes, and fennel?) were intensely buttery.  Neither were of the "light" variety I typically enjoy, but for a cold, snowy night they were perfect. 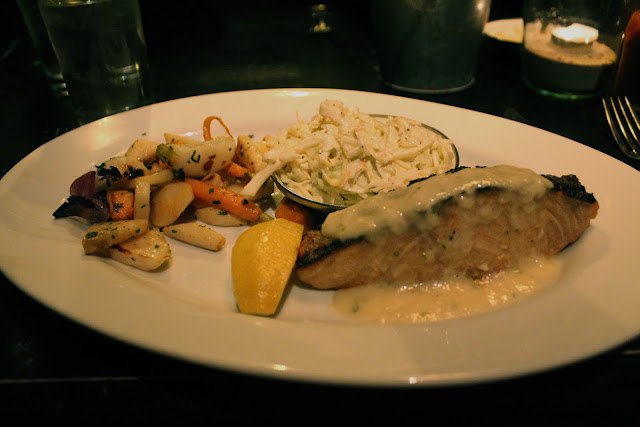 The swordfish comes with a different sauce (although I'm sure you could mix and match if you so desire), with a slightly lighter feel ($25).  Swordfish has a distinctly light flavor, so would potentially suffer under a heavy sauce, but the tomato-caper salsa didn't weigh it down.  J's sides of choice were the cider braised brussels sprouts and the rosemary marble potatoes (ironically, both the sides I wanted- are we twins or something?).  However, I'm glad I didn't order the brussels- the apple flavor was enhanced by chunks of apple served in the mix.  Not a huge fan of vegetables and fruit mixing, but she seemed to enjoy them. 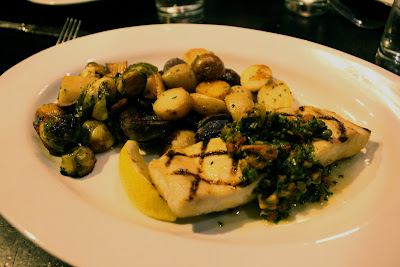 The husband took the road less traveled and selected an entree from the "Shore Classics," the Maine mussels ($16).  A personal pot (always a nice touch) gave way to an enormous pile of large mussels, steamed in a butter-garlic-white wine sauce- the best way to cook mussels, in my non-mussel-cooking-opinion. 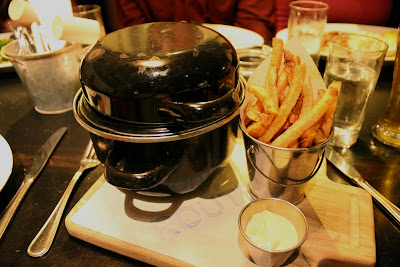 The pot is served with a bucket of house cut fries with a mayo-based dipping sauce, giving nod to a classic French/Belgian moules frites.  He was worried it wouldn't be enough food but it was really plenty- those mussels were perhaps the largest I've ever had. 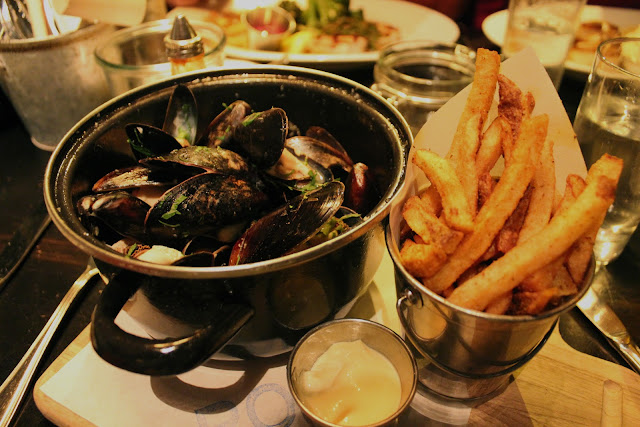 Of course we had to splurge on desserts, especially once we eyed the menu.  It's small, and it's really basic, but it's full of everyones favorites ($8 each).  First up was the warm apple pie, served (of course!) with vanilla ice cream.  I'm weird and don't like warm fruit, but ended up eating most of the ice cream because it was coated in toasted crust crumbles- yes!  The apple were thinly sliced but not baked to oblivion, and the crust was reminiscent of a thin puff pastry (at least from what I heard/saw). 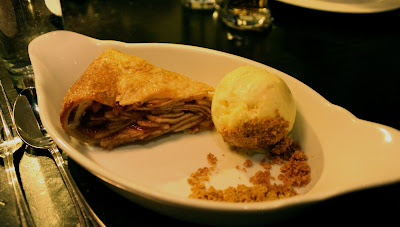 The Chocolate Bread Pudding is definitely the most eye-catching, as it's served with banana ice cream and bourbon caramel sauce-- chocolate, banana, and caramel in any dessert is recipe for success.  Baked into an adorable cast-iron dish, it's definitely large enough to share (but delicious enough not to!). 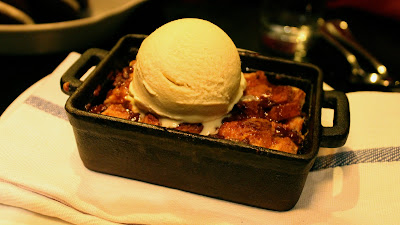 Our final bite of the night was the homemade chocolate whoopie pies.  Whoopie pies are such a regional childhood treat, it's rare to see them served at a restaurant- but we think that's a shame!  The chocolate cakes were a mix of brownie and cake, fluffy but still dense enough to maintain plenty of moisture.  The sticky fresh marshmallow cream made a great "icing." 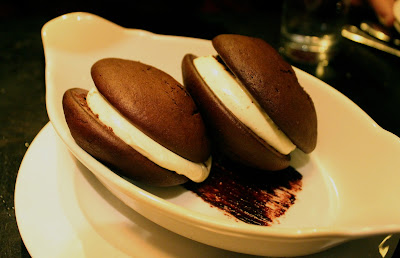 Stephen Starr really never fails- taking a concept that the general public will enjoy and shaping it into a venture with a menu full of both classics and fun novelties as well as an atmosphere that makes eating much more of an experience.  While we wouldn't champion his restaurants as best eats in the city, we appreciate what he has done for the dining scene and continue to enjoy his latest creations.