Yep, we're still on that seafood kick.  A parental visit required a nice dinner out to celebrate a number of things (birthdays, manuscript publications, a new condo purchase), and we decided on a late meal at Oyster House.  Unfortunately, our visit got off to a VERY bad start- we came close to canceling our reservation.  Despite said reservation, the front of the restaurant was absolutely packed with people waiting for tables- and we were told it could be awhile before we would be seated (by a very flustered and not very polite hostess).  The noise level was out of control, and there was simply no place to wait without being constantly jostled by other diners, food runners, and wait staff.  Not my idea of a good time.

After about fifteen minutes, we finally fought the crowds to our table, which was in a slightly quieter (but still loud) space in the back (the bar up front is the major noise culprit).  Our waitress was very sweet and attentive despite her heavy workload.

Our dad started out with a bowl of Manhattan Clam Chowder ($6.50), served in a shallow bowl and spinkled with a little parsley garnish. The classic tomato-based soup was on the thinner side- all the veggies and pieces of clam were chopped very small.  I personally prefer a heartier soup, but the seasonings were well-balanced- a bright (and light!) soup to start the meal. 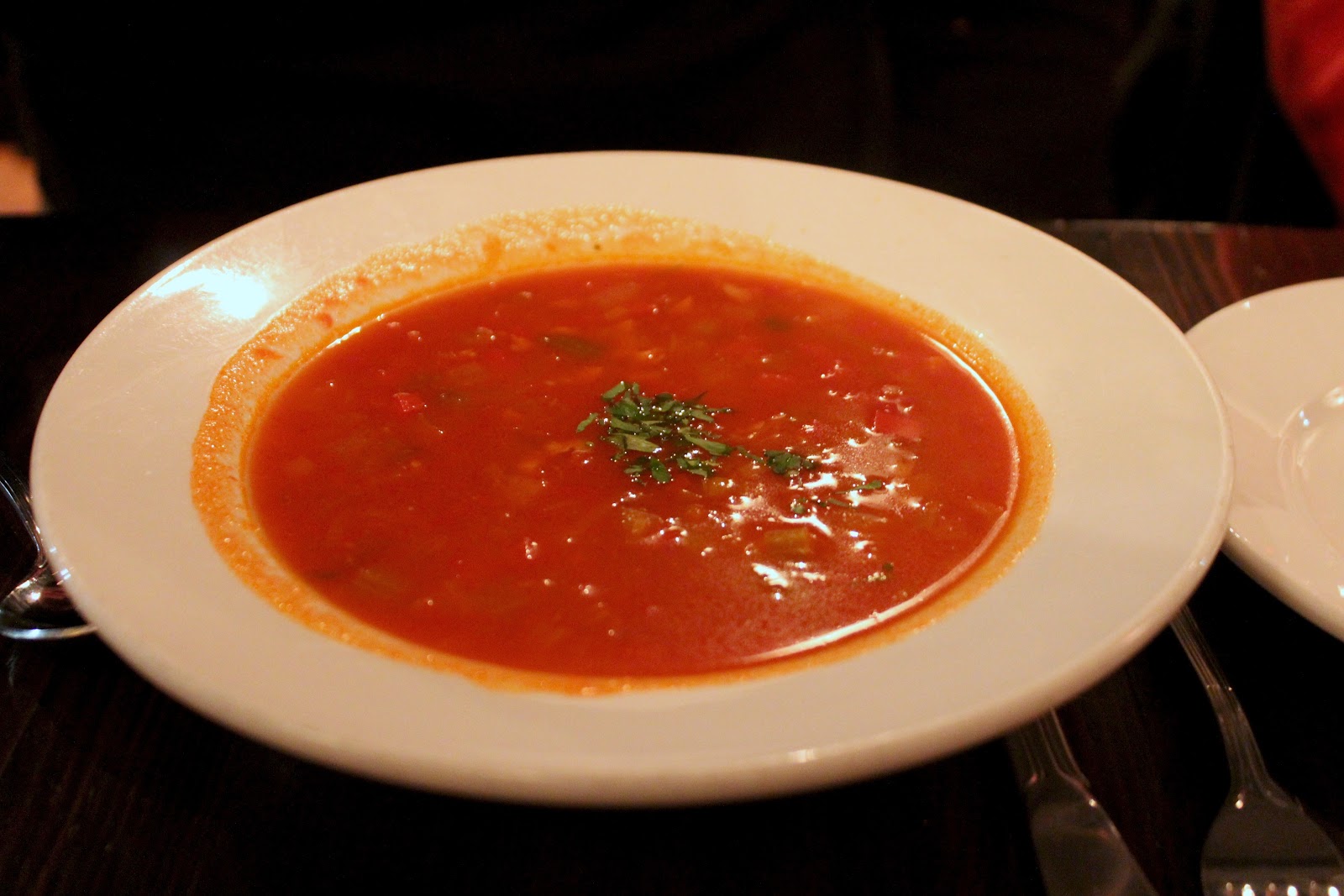 The little touches in the restaurant are nice- the decor is rustic but still upscale, with walls covered in dozens of different oyster plates and the bars topped with marble.  A very large goblet full of enormous oyster crackers made for a nice crunchy snack (and soup accompaniment), though I think the jar of horseradish went untouched. 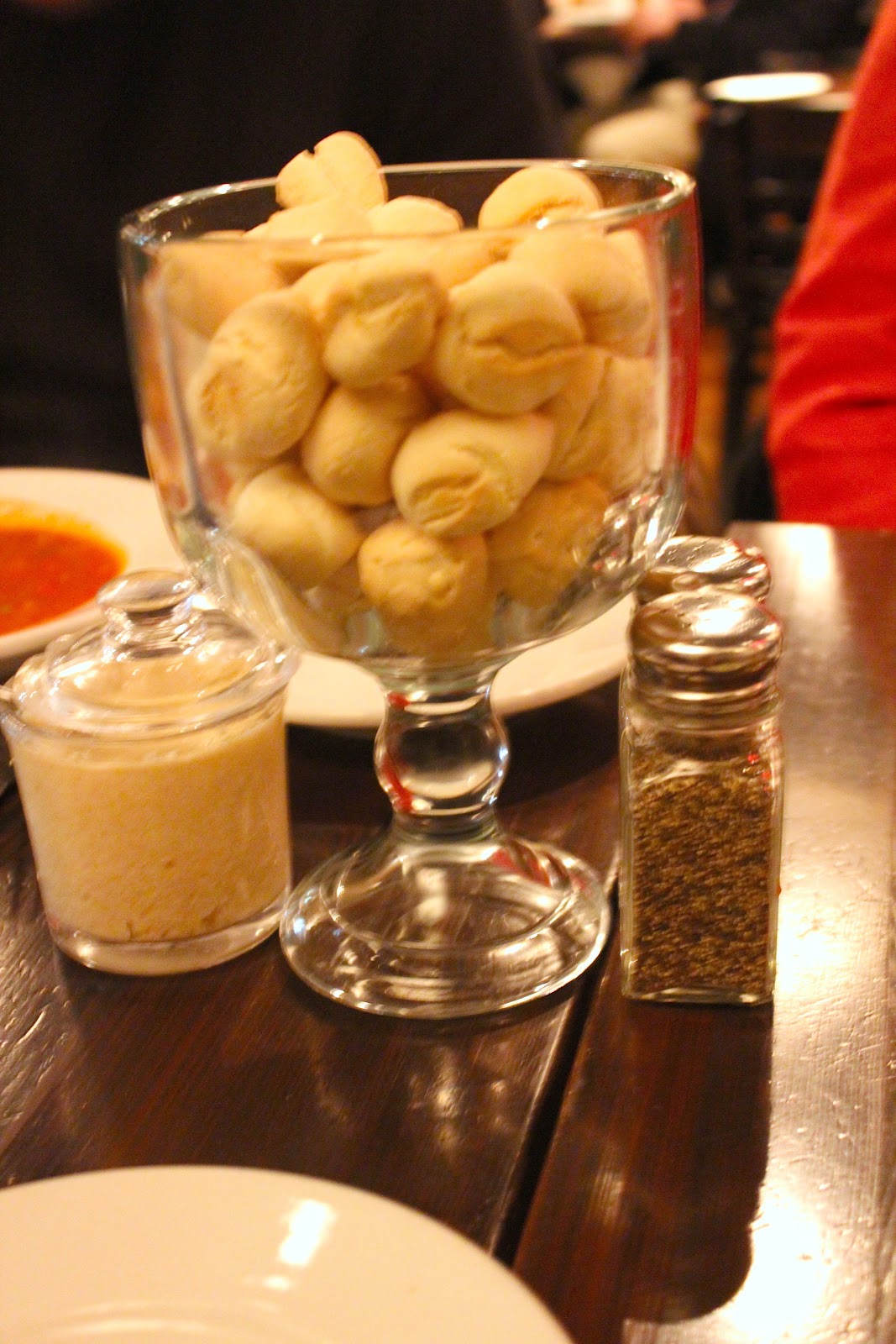 Two of us also started with the smoked bluefish salad ($7). The lettuce was entirely frisee (not indicated on the menu), but the slightly bitter green was subdued by a smoky, creamy dressing.  The dressing was not overly heavy, but had a very rich, salty flavor that was well-matched to the small chunks of smoked bluefish.  Radishes and asparagus were appropriate vegetable additions- definitely not your run-of-the-mill salad. 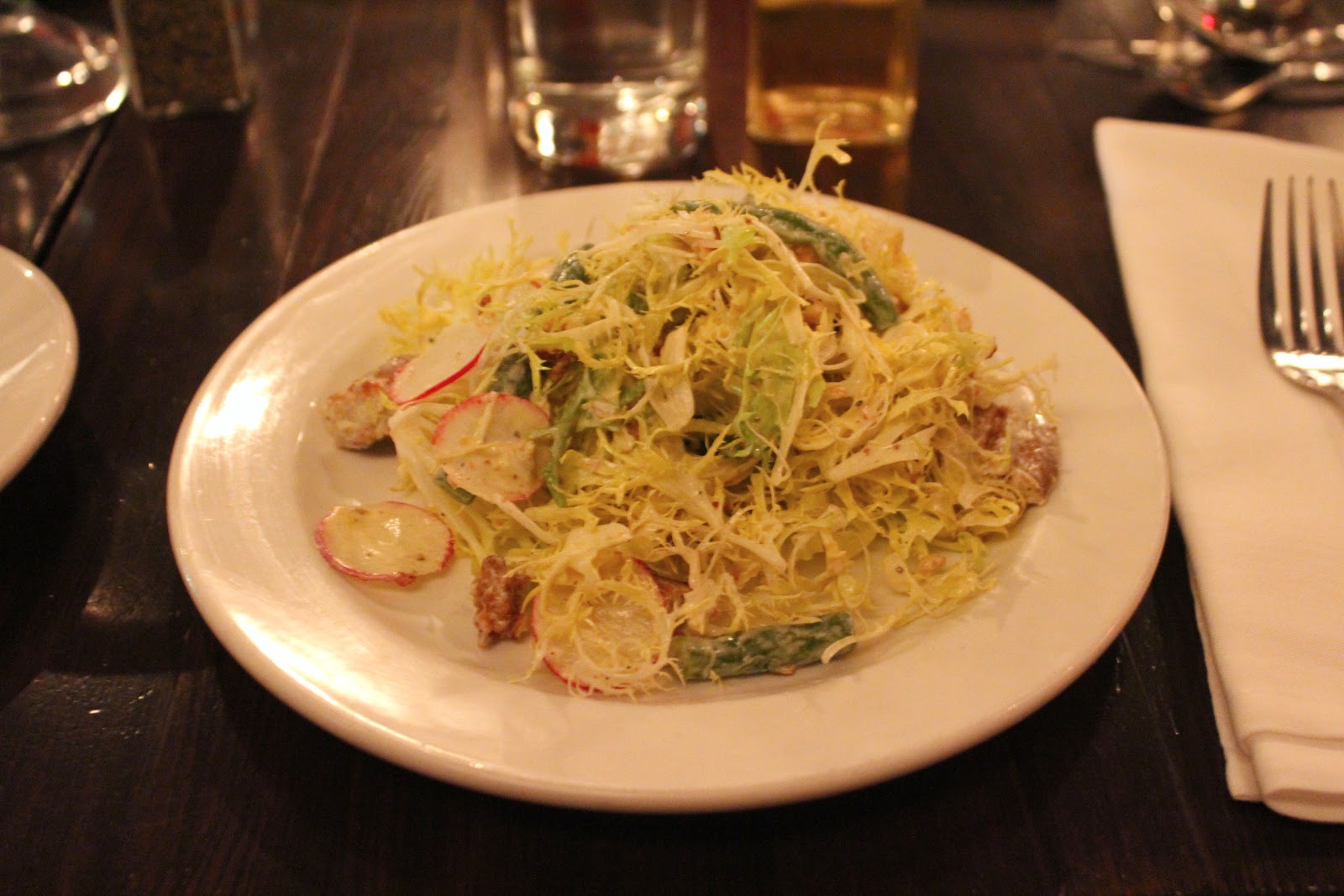 I wasn't super hungry, so I chose the snapper turtle soup ($7) as an "entree."  I've never had snapper turtle, so it was a new experience!  The broth was significantly thicker than that of the Manhattan chowder, though it was packed with similar components: carrots, peppers, onions, celery, and of course, slightly chewy little bits of turtle.  I added a bit of sherry vinegar provided alongside the soup, which gave the already well-rounded dish an extra dimension of sweet tartness. 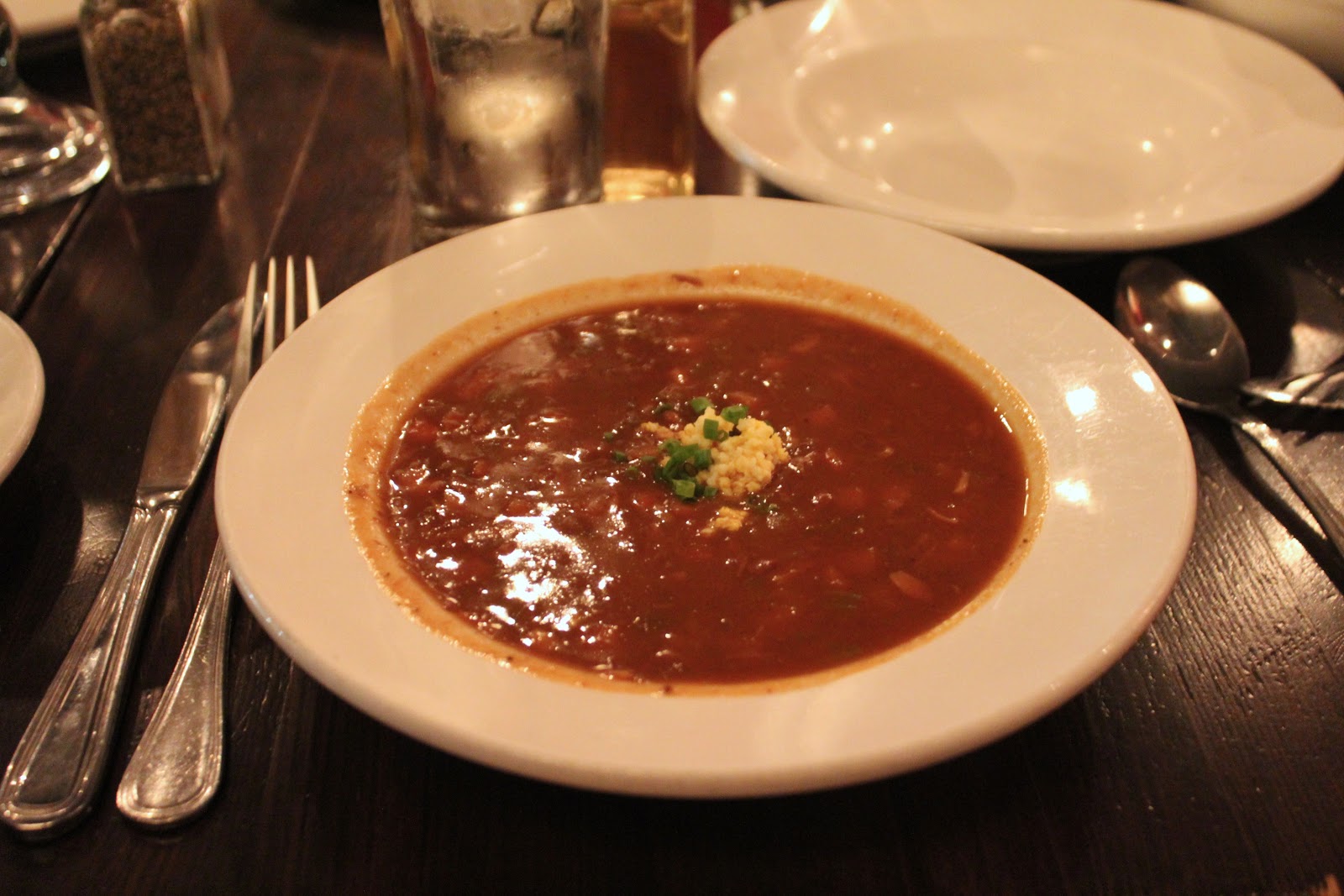 While the snapper was a classic (and delicious!), I had pretty major food envy for A's choice: the Fisherman's Stew ($21).  This soup was packed full of all the best seafood: shrimp, calamari, lobster, mussels, clams, and a chunk of swordfish.  A spicy broth took a lot of flavor from the fresh parsley garnish as well as a saffron rouille: breadcrumbs mixed with spices (chili powder!), garlic, olive oil, and a whole lot of saffron- the flavor was bold without being overwhelming.  A few slices of grilled sourdough smeared with a rich buttery cheese spread added some much-needed chewy carbs to the meal. 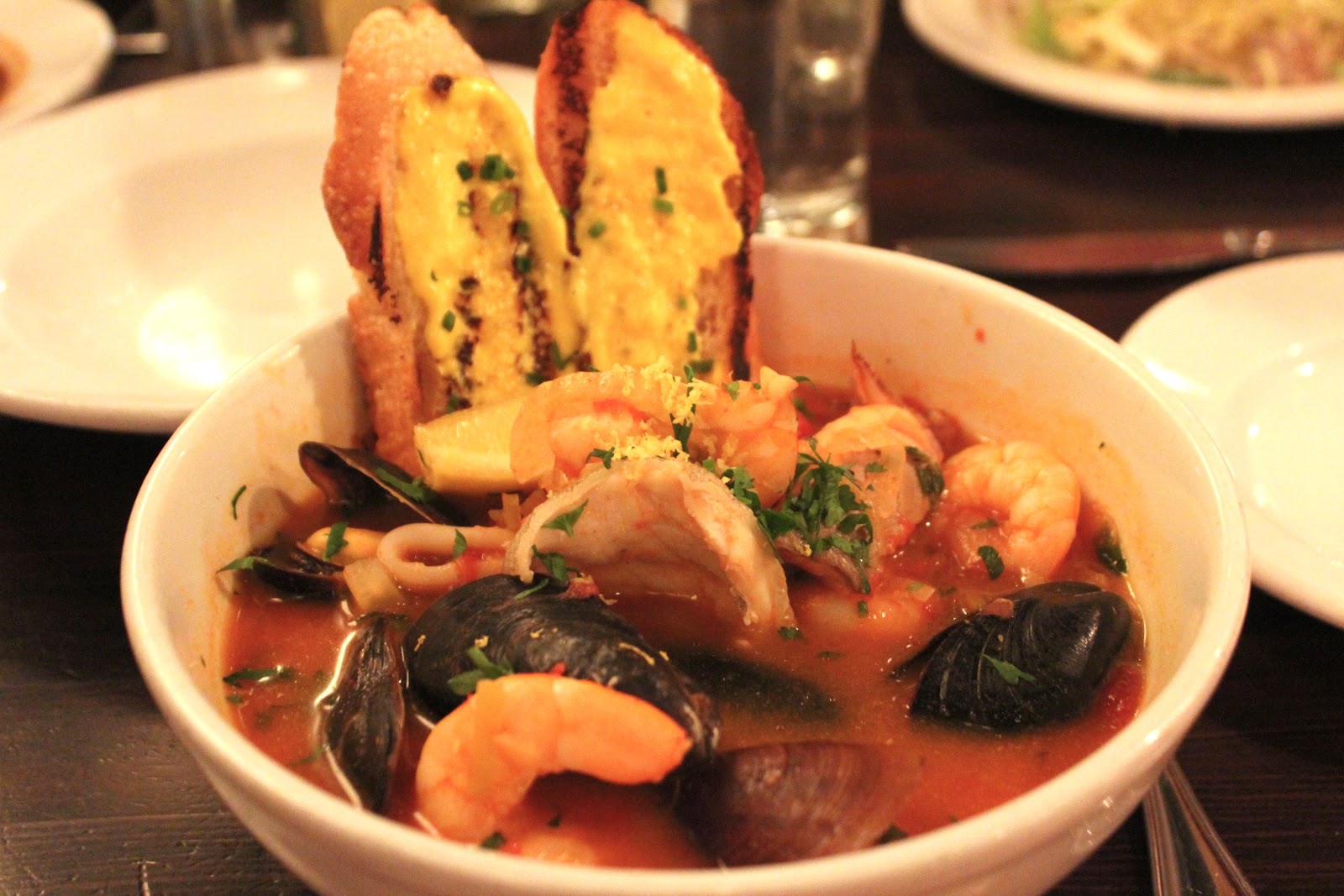 Once again, our resident burger eater "took one for the team"- the OH burger ($14) is a beast.  A hand-formed grass-fed beef patty is smothered with blue cheese and topped with a cornmeal-crusted fried oyster.  Pretty perfect burger, in my opinion.  Fries and a few bread-and-butter pickles completed the plate- just right for the meat-and-potatoes kind of guy (or girl!) with the added seafood twist of the fried oyster. 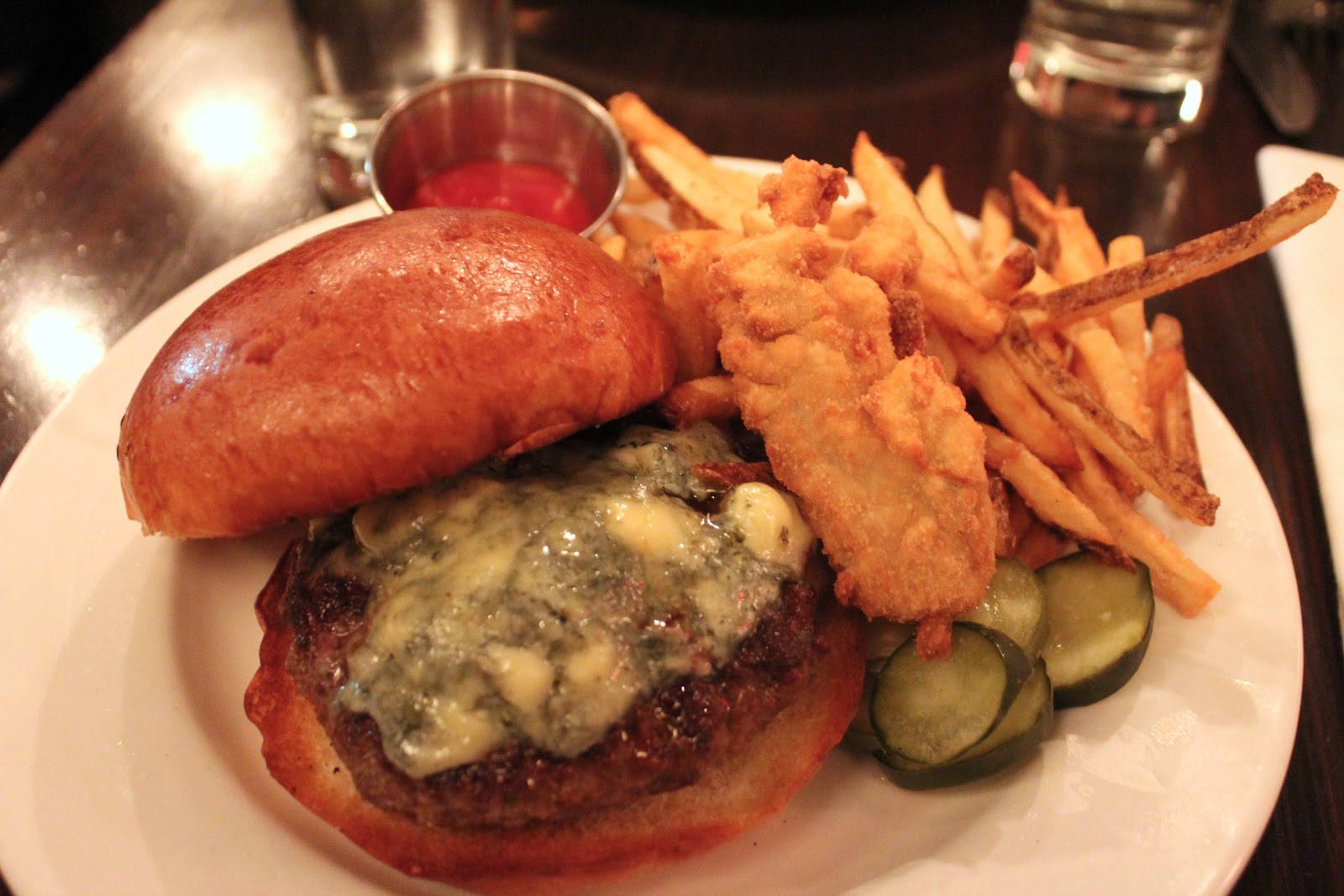 The more decadent choice in sandwich comes in the form of a lobster roll ($26).  Offered chilled or warmed, the split roll is absolutely stuffed with lightly seasoned and sauced lobster meat.  Oyster House does a good job of taking a high-quality product (super fresh lobster maintained in really large pieces) and letting it speak for itself.  Sweet and salty, with an authentic brioche split roll vehicle- just lots of lobster, no bib required. 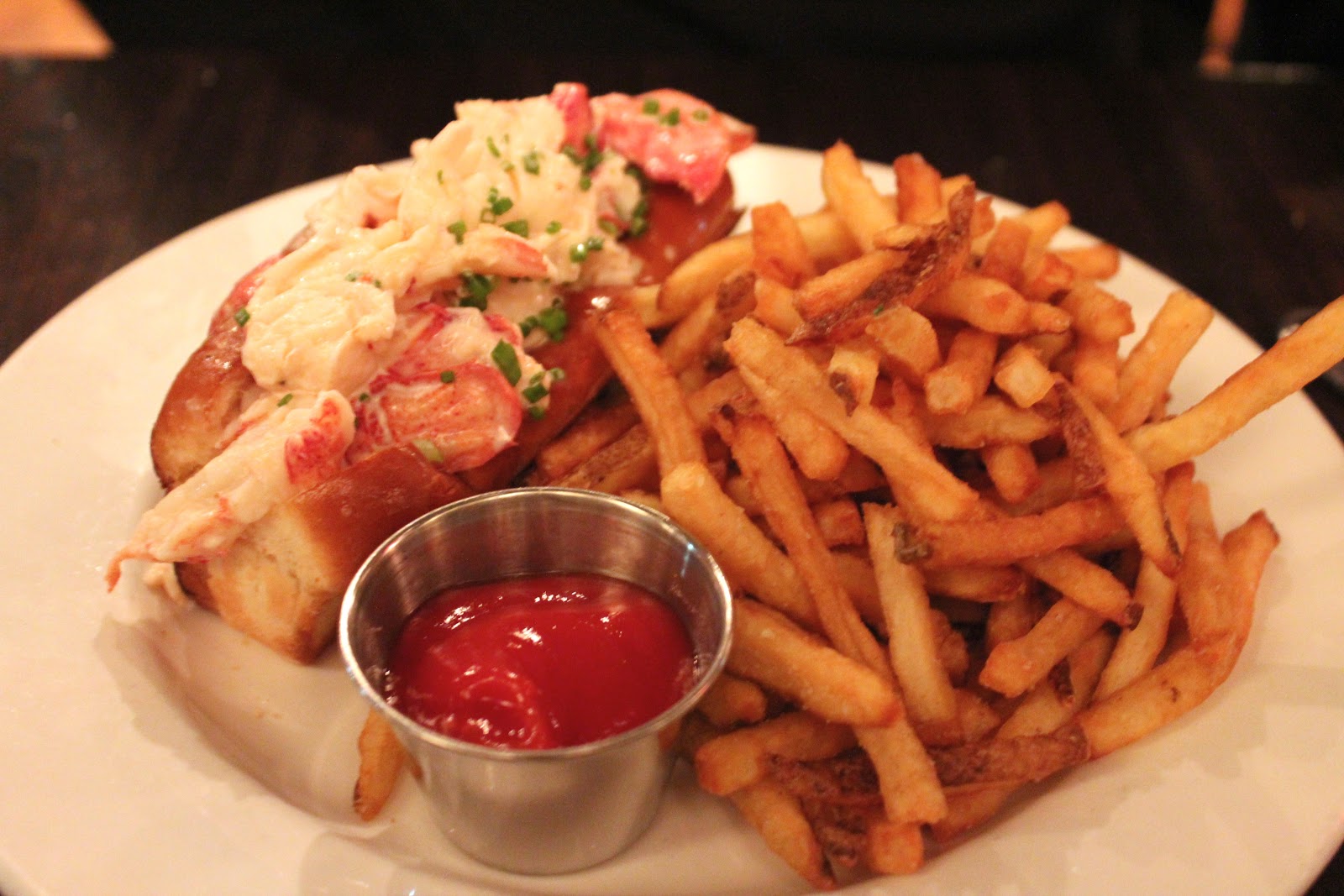 I also decided to add a few more vegetables to my meal with a side of cauliflower ($5).  The texture said "steamed" but the florets were also lightly browned, indicative of a quick trip to the oven as well.  Unfortunately, the cauliflower had a really odd flavor- I'm not sure what they were dressed in, but it did not taste right at all.  I know cauliflower has that potent cruciferous smell, but this seemed like an amplified flavor version of that smell. Hard to describe, hard to eat. 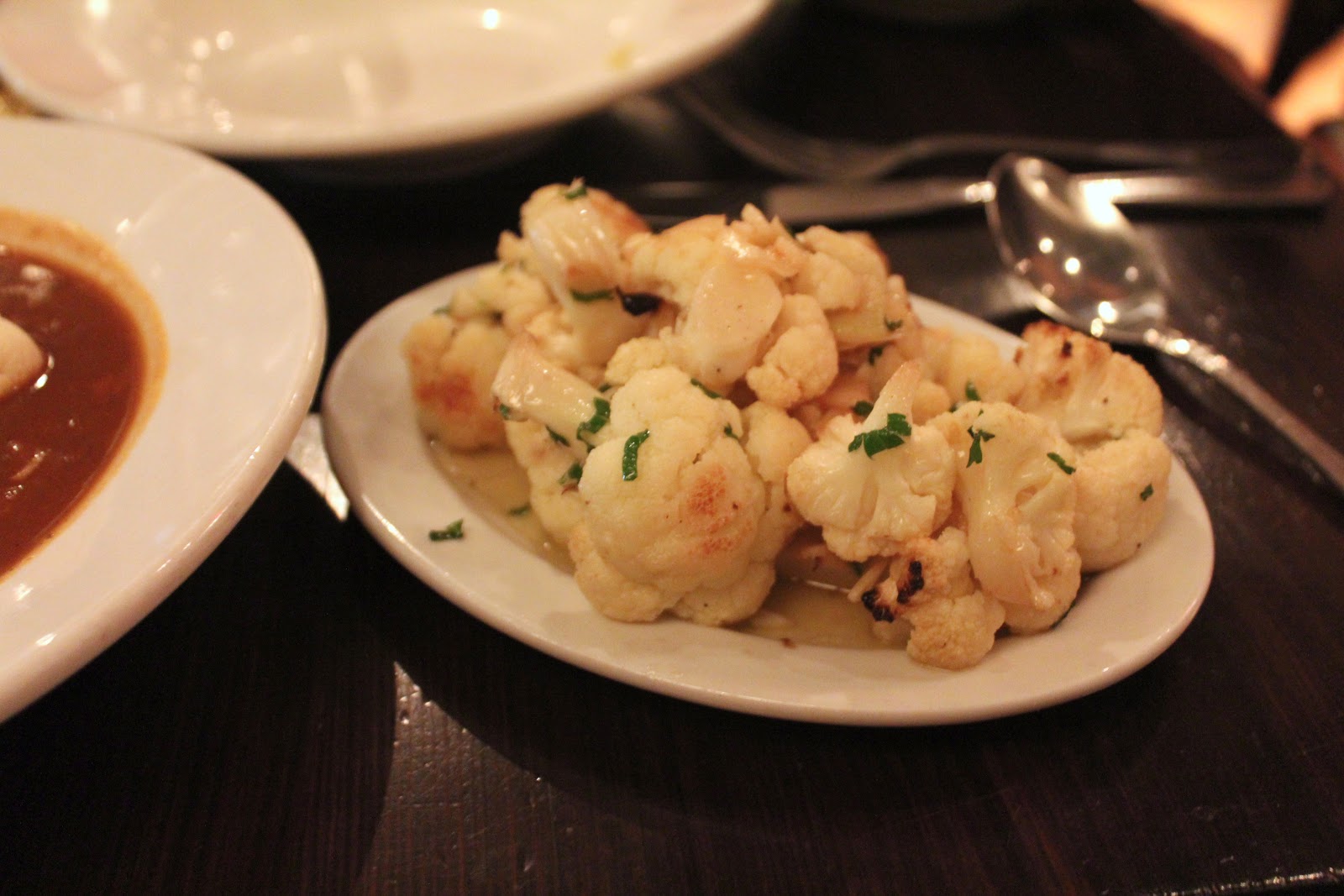 My mom also tried the BBQ oysters ($12)- grilled and served on the half-shell on a plate of salt.  The addition of fresh herbs, butter, and a little hot sauce give the oyster some extra flavor, and they had a strong fresh-off-the-barbecue scent.  If you're looking for fully cooked oysters, avoid these- they're cooked lightly to maintain the super-delicious natural flavor of the raw oyster.  This dish ended up being "forgotten" when the rest of the plates were served to the table, so our waitress took the oysters off our bill... something not a lot of restaurants do anymore!  $12 for 4 oysters seemed pretty steep anyway, but oysters from the raw bar range from $2.25 to $3 a piece, so no real surprise. 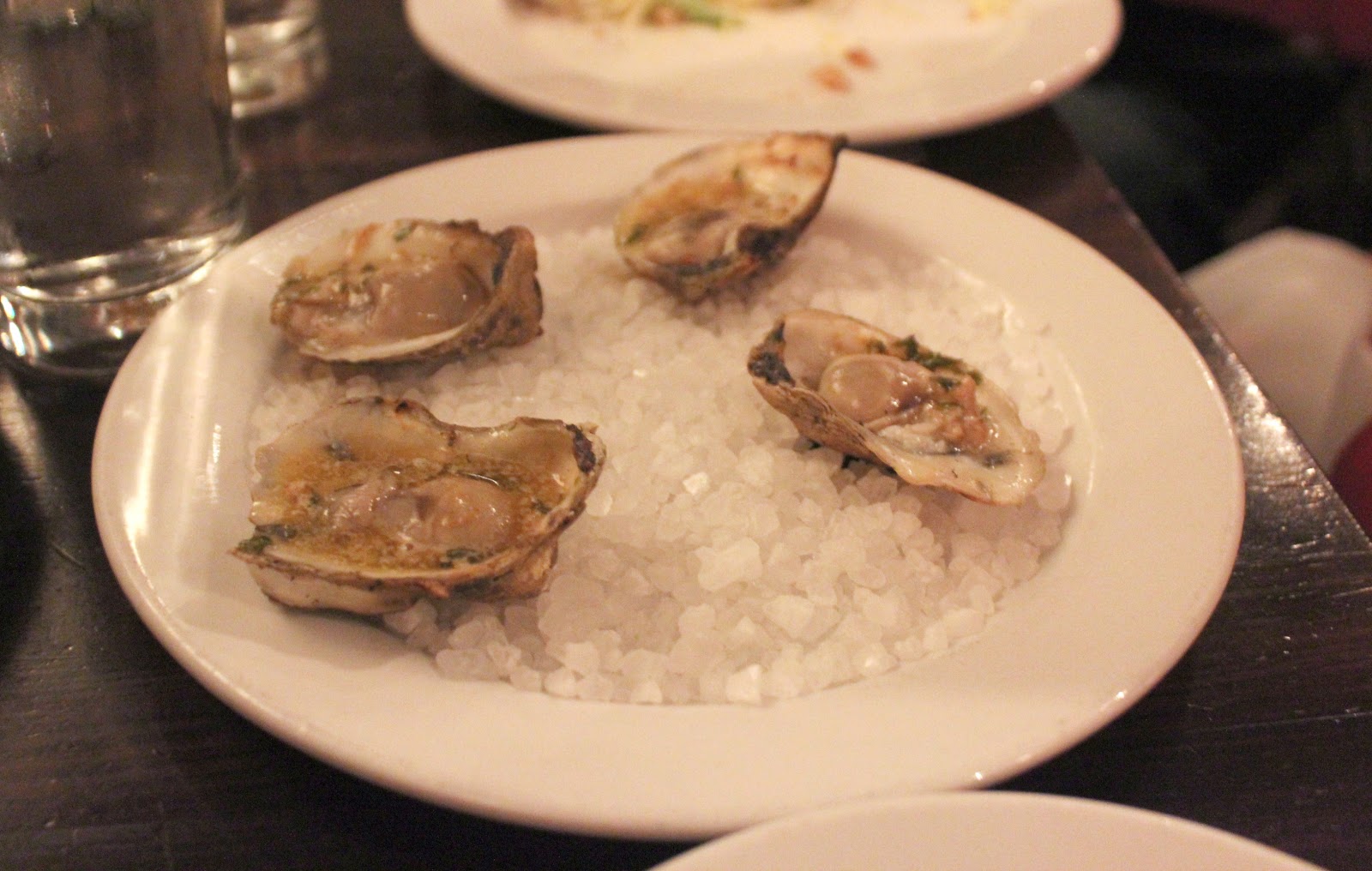 The food at Oyster House was solid, but our main take-away memory of the meal was the super annoying hassle before any idea of food was even introduced.  I'd definitely stay away from Oyster House in the later evenings of the weekends.  Several of our other recent seafood eats can provide the same fresh eats with a more relaxed, less stressful atmosphere-- we'll post a recap of all of them soon!