After stuffing our faces on unlimited food truck snacks (if you missed out, read here), we headed inside for the EATS Philly Chef Throwdown.  The huge ballroom at Vie was transformed into an Iron Chef-type competition space, with the judges up on stage and tables for each of the competing chefs down below.

The judges included Michael Klein from the Inquirer and Tony Luke Jr., famed cheesesteak heir, and the competition was emceed by NBC 10's Tom Furlong-- it was fun to see so many local "celebrities." Tim did a great job of interviewing the contestants, the judges, and the crowd, but unfortunately the sound system wasn't great enough to overcome all the chatter of the guests.  While it would have been fun to catch all the action, it was enough just to taste test all of the competitor's goods. 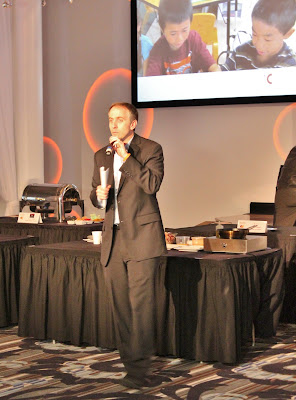 The food started rolling out almost as soon as we sat down, clearly having been made in mass quantities ahead of time.  For some of the dishes, that was fine, but some would have been significantly better if eaten straight off the stove.  Understandably, providing samples for 200+ folks at the same time doesn't allow for that.

There were two rounds of 6 contestants, so plenty of bites circulating over the course of the hour.

Up first: Chad Rosenthal from The Lucky Well (Ambler): Memphis Pie-- Handmade pie crust, filled with a backyard Ambler smoked pork shoulder, homemade BBQ sauce, and slaw with a kick, finished with a pickle trio.  Genius idea, but not as flavorful as I hoped (and it was cold).  Second out: Angie Brown from Soul Catering Inc. with a Louisiana Creole Peacemaker: Louisiana oyster po'boy with spicy remoulade sauce and creole praline.  Can never turn down a fried oyster, but again would have been better fresh outta the fryer. 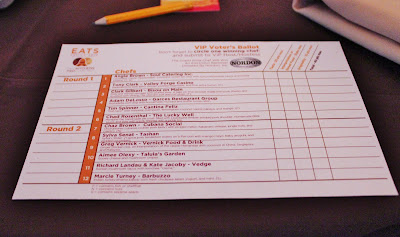 The judges gave marks for Taste, Interpretation of Street Food, and Originality, and I have to give major props to the chefs for getting very creative.  Clark Gilbert from Bisou on Main made one of my favorite dishes: pork and shrimp sausage with pickled slaw.  A really nice two-bite dish. Some of the dishes were way too big, including a ridiculous artsy dish from Tony Clark (Valley Forge Casino)- a steamed bao bun with BBQ shrimp, pickled vegetables, and five-spice bacon.  The overly sticky bun dough sealed the deal: not my favorite.

The final two dishes of the first round were a two-component dish from Tim Spinner (the owner) of La Calaca Feliz, and a Mortadella corn dog with housemade mustard from Adam DeLosso of Garces Restaurant Group (formerly head of Garces Trading Company).  Tim's dish was awesome: a "fish taco" (in a mini hard shell) with Hawaiian kampachi and a lemongrass-coconut sauce, and an off-the-cob corn salad reminiscent of the Mexican street classic, esquites.  This dish actually won the "People's Choice" award-- top ranked by the audience, although not so by the judges.

After a short break and some amazing auction items (really wish I had a couple grand to spend on a private event at COOK or a dinner with Craig LaBan!), the food began again.  The second round was a more competitive round, as chefs included Greg Vernick, Aimee Olexy, and Marcie Turney.  Scary!

We were allowed to go and watch the chefs making their creations (larger portions and more beautiful plates fresh for the judges), but I mostly stayed out of their way.  Highlights from the second round included:

Sylva's Slider (from Sylva Senat of Tashan; see above): a wonderfully flavorful pork tenderloin slider with mango mayo and pickled cucumbers-- is this on the regular menu at Tashan?!  The bun was a bit dry but the meat and the topping flavors were perfect together.

Korean mushroom tacos with kimchee "crema" from the team at Vedge: Richard Landau and Kate Jacoby have no trouble concocting a vegan dish for a carnivorous crowd, that's for sure.  I do think they could have been more heavy handed with the spice, but understandable for a mixed audience.

Gooey cheese and mushroom crepes from Aimee Olexy of Talula's Table: quite a feat to provide something gooey to such a big crowd, but she succeeded.  Unfortunately at this point in the evening, something this heavy wasn't sitting well with my palate or my very full stomach.  On its own it may have been one of my favorites!

Last, but not least, Marcie Turney's Indian turkey khema kabob with fresh chickpea salad, yogurt, and mint.  Another ridiculously over-the-top plate which was kind of a turn off (no food truck would construct this!), but especially when wrapped up in the Bibb lettuce leaves, all of the components shone together.  And here we are: the winner of the evening!  Apparently the judges were more enamored with the presentation than I was.  I also loved that she went with an Indian dish, a little throwback to her days at Bindi.

The evening wrapped up with additional live auction items, and then we rolled ourselves home.  A walk down deserted Broad Street was perfect for recapping our favorite eats of the night- and mentioning several times how happy we were that the team at EATS Philly reached out to us with the offer to attend as their guests.  A really nice event from conception to conclusion- very well organized, with lots to offer attendees: an overwhelming amount of food and drinks, hours of entertainment, and the chance to meet and mingle with some local celebs (we fangirl gawked at Jose Garces on our way out!).  A great way to support worthy causes, and get a big bang for your (tax deductible) buck- we're looking forward to future events.
Posted by A and J at 9:22 AM