It's been a month (!!) since I gave you details about a fun event for a Philadelphia-based charity, EATS Philly.  Just a little reminder, EATS (Eat Along The Street) is co-chaired by Moon Krapugthong, a much-loved Manayunk based chef, and was established to support organizations through "feed(ing) both body and mind through multicultural cuisine and education."  This years event raised money for new kitchen facilities at both Wat Bodd Voraditth, an orphanage in Thailand, and Children's Village, a local Chinatown education center.  The event was really a two-for-one, with a free-for-all of amazing food trucks to begin, and then a Chef Throwdown, with chefs from around the city challenged to produce their best street food inspired dishes.  Our recap will be split in two, since there was so much to do (and eat!).

The event was held at Vie, on South Broad, with participating food trucks making a mini food festival on adjacent Green Street.  After checking in, guests were invited to sample from amongst all of the trucks- quite a feat, especially so soon after the Manayunk StrEAT Festival.  Thankfully, the trucks realized we didn't want to fill up and offered smaller portions.

Since J was unfortunately occupied at a Phillies game, I invited a food-loving friend to help me get a wider perspective on the offerings.  After doing a quick run through of the options, we started at the far end at Foo Truck.  A new-to-us truck with a definite Asian flair, Foo Truck actually got my vote for Best Truck at the event.  The truck typically produces "Foowiches," your choice of filling tucked into a tortilla and grilled.  For the EATS eaters, we were provided just a sample of the filling- perfect to get a taste.  I sampled the Lemongrass Chicken, chunks of grilled chicken with plenty of flavor from both a lemongrass marinade and the smoky grill.  The Thai Curry Quinoa completely stole the show though- a surprisingly delicious vegetarian option that completely outshined its simple appearance.  The green curry was both intensely bright and super spicy, and helped create an almost risotto-like texture. 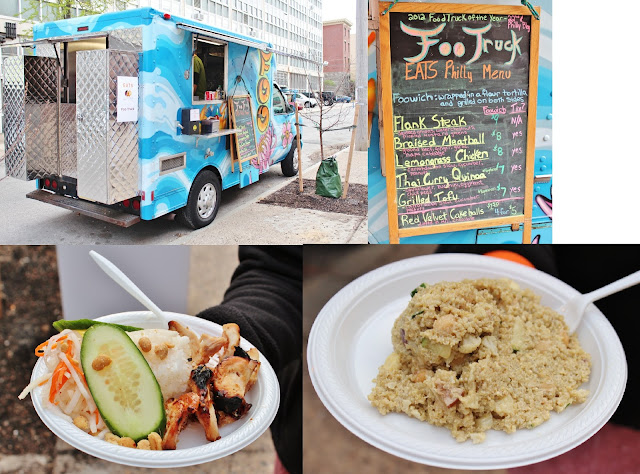 Our runner-up for Best Truck (well, it may have been a tie, since we had two votes between us) was Nomad Pizza.  I already know that the Nomad storefront off of South Street is one of the best pizzas in the city, so no surprise that they can turn out the same quality of pie from a (very decked out) truck.  This isn't your typical food truck.  Nomad sets out separate tables under an attached awning for pizza preparation, including dough stretching and topping application, and the truck serves essentially as a mini kitchen- wood-fired brick oven, refrigerators, and sinks.  A major step up from most trucks, but the food they produce makes it all worthwhile.  We sampled slices of Truffled Pecorino (with super runny egg- yes!), Spicy Soppressata, and Arugula con Proscuitto.  I definitely preferred the Truffled Pecorino, but all of them have the ridiculous soft, chewy crust and high-end organic/local ingredients that make Nomad what it is. 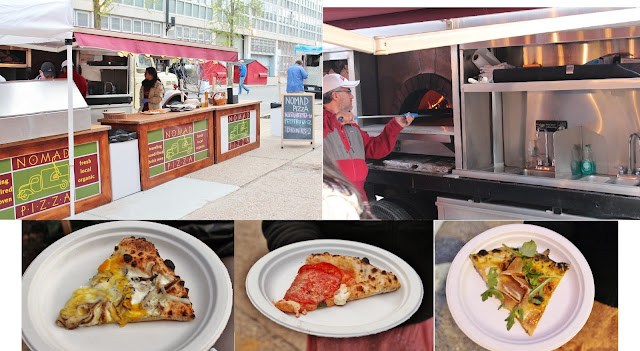 I was pretty pumped to try Sammy Chon's KTown Express Koagie Truck, but they unfortunately were only offering a sampling of tiny tacos (Korean tacos?) and two flavors of wings.  The man dishing out the food suggested the tacos over the wings, and instructed us on different sauces available for extra flavor.  The taco shells were essentially deep fried wonton wrappers, but made eating the little guys more difficult than you'd imagine.  The fillings weren't terribly memorable, although perhaps too small of a serving to really get a handle on.

Vernalicious was our next stop, although looking back we probably should have skipped this one.  No offense to Verna (?) but the menu was much more basic and "typical food truck" fare than most of the other trucks.  The Fried Haloumi wrap caught my eye, since I am obsessed with the squeaky cheese, which worked really well in a soft pita with lemon dressed greens.  A grilled lamb gyro was also solid- flavorful meat and all my favorite Greek toppings. 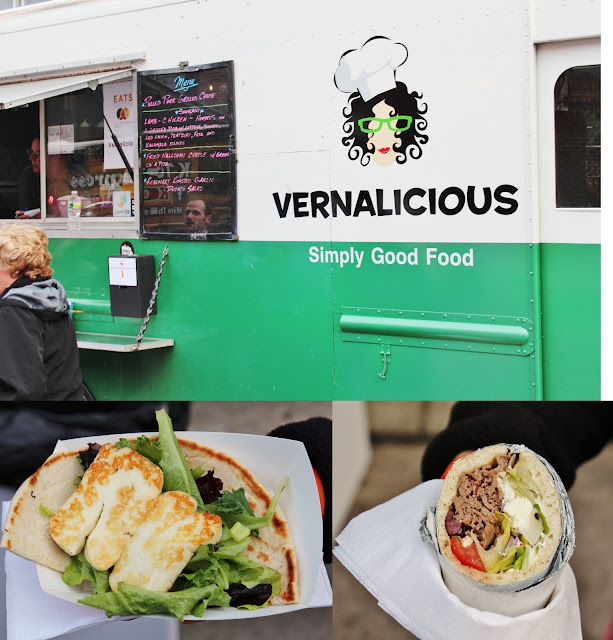 I had to laugh at the nonexistant line at The Cow and The Curd, since it was probably THE most popular truck at the Manayunk lineup.  Definitely a different crowd at EATS, and apparently a crowd that doesn't favor fried cheese curds.  My first foray with these little fried nuggets was fine (although the truck owner did a terrible job of keeping track of who was next to be served, which was semi-ridiculous considering the overall lack of interest), but really just reminded me of mozzarella sticks.  Am I missing something here?

While waiting for our curds, we were entertained with a Dragon Dance, a traditional Chinese celebration performance.  Three two-man dragons danced down the street to live drum music, attempting to "eat" guests along the way.  I can't remember ever seeing a live dragon dance, so it was fun to see the participants get so into it, even though it was relatively small compared to some of the ten-men dragons out there. 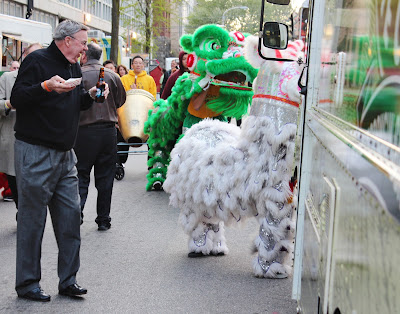 Our final truck eats of the night was at Gozen Yogurt, which I personally enjoyed based on their concept alone.  It was seriously just like a serve yourself frozen yogurt shop, just stuck into the side of a truck- so great!  A small variety of flavors, both fruity and more dessert-y (fruit alone doesn't classify in my opinion), with a small stand of add-your-own toppings and sauces.

At this point, we'd been perusing and eating for about an hour, and it was finally time to head inside for the first round of the Chef Throwdown-- and more eats!  Stay tuned for details on the competition itself.