Location is everything super important for a restaurant to succeed, and one would think 11th Street between Walnut and Locust would be fail-proof.  Unfortunately, after the long stint of Doc Watson's (1971-2010), the space has changed hands a number of times in just a few years.  Strangelove's is the newest rendition, thankfully run by the same experienced pair who has brought us Memphis Taproom and Local 44.  Let's hope this concept sticks because it sure is good. 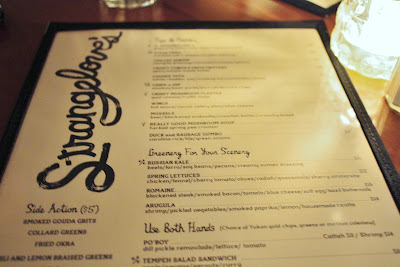 We were seated in the back portion of the first floor, which was a little too dim but cozy and quiet. Our waitress was completely emotionless but no other complaints on service.  The menu finds inspiration from NOLA cuisine, a nod to Chef Paul Martin's place of birth.  I particularly enjoyed the "greenery for your scenery" section of the menu- I love a good, inspired salad, especially amongst many gastropub-y options.  The Russian kale salad ($10) is hands down the best salad I have had in recent memory, an ENORMOUS portion of kale perfectly massaged with an acidic sumac dressing and mixed with nutty farro grains, edamame, chopped pecans, and huge chunks of sweet roasted yellow beets.  Although this is the perfect balanced meal all by itself, three of us could not take on the size of this thing. 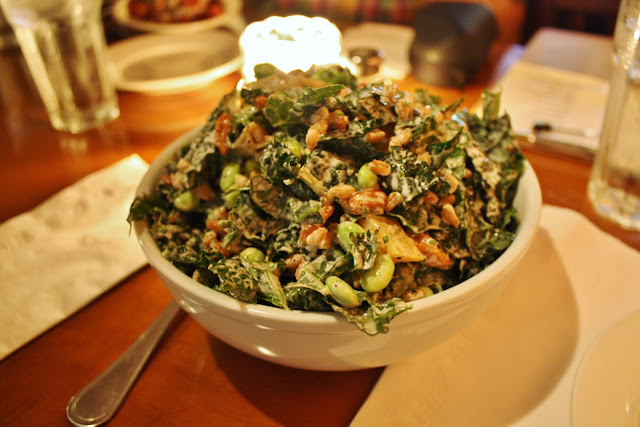 Obviously we had to try lots of the unhealthy stuff as well, including the loaded tots ($5).  The "tots" were more like really rich gnocchi, with a creamy center- I'd like to see a little more crunch, but if you like melt-in-your-mouth tater tots, these are for you.  The potato bites are topped with a thin, mild white cheddar "wiz," crumbled smoky bacon, and chunks of tomato and finished with a sprinkle of fresh chives.  I think a few more toppings are needed for these to be truly "loaded" but they were enjoyable. 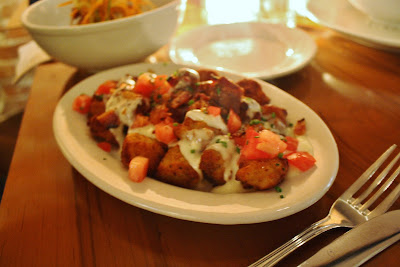 The wings were also a necessity ($8), oddly served in a bowl topped with a carrot and celery slaw instead of the typical carrot and celery sticks.  These are described simply as being coated with "hot sauce," but we tasted an interesting complexity to the sauce- rice vinegar? Sesame oil? Something Asian, it seems.  There was definitely a crisp, tangy bite thanks to plenty of vinegar. 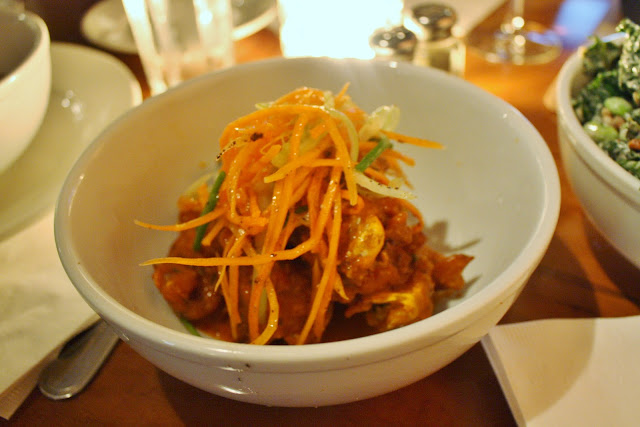 Strangelove's caters to the vegetarian/vegan population, with several clearly marked options for each.  Even though we're indiscriminate eaters, A tried out the "really good mushroom soup" (vegetarian, $6) which had a surprising amount of flavor- very well-seasoned and with a richness probably due to plenty of cream and a variety of mushroom species.  A drizzle of truffle oil didn't hurt a bit.  The large crouton dressed in a pea puree added some textural variety and helped make the soup a little prettier, but the pickled mushrooms didn't pair quite as well. 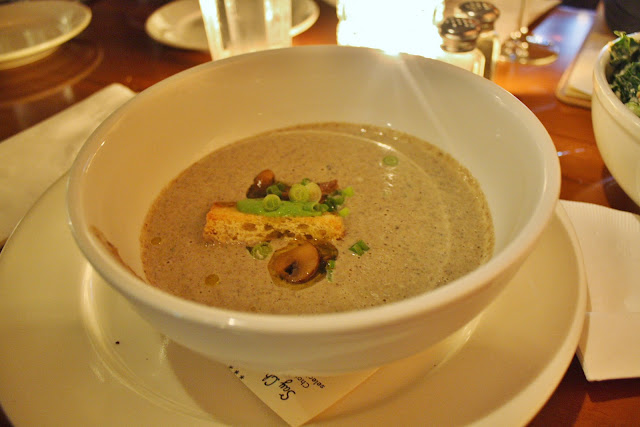 I also tried out the signature burger ($14), an incredibly dense, thick patty of beef on a fluffy potato roll.  Well seared with a perfect pink center, thankfully medium-rare as ordered. The thing I noticed most was that the burger didn't drip grease, making for clean eating and all the flavor retained in the sandwich instead of on my plate. 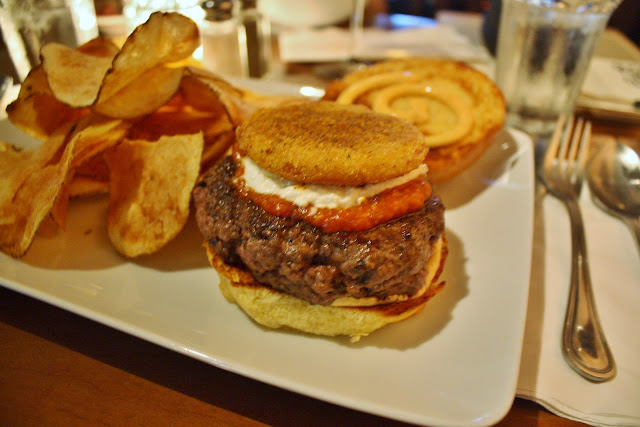 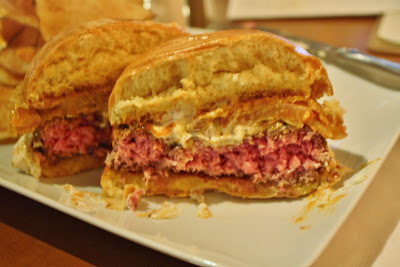 Toppings include a fried green tomato (always a good bet), a pool of goat cheese sauce layered with a chili pepper aioli, and a bacon BBQ sauce in place of your typical ketchup.  There was lots going on, but each element was portioned perfectly to create the right ratio of flavors.  It was even great eaten cold for lunch the next day (yes, I'm weird, I prefer things cold over reheated).
A simpler sandwich is the catfish po' boy ($11), a flaky fried piece of fish on airy white hoagie bread complemented by a slightly spicy tartar sauce, a bit of shredded iceberg, and sliced tomatoes.  The softness of both the fish and the bread was slightly surprising- not a lot to bite into- but the simplicity of it was appreciated.  A chose the "greens" over the house made chips- definitely not as good as the kale salad, but a solid mix of crisp veggies with a light lemon-y dressing. 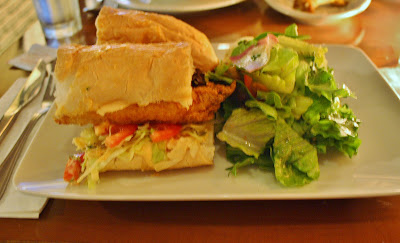 The last dish we tried was the only disappointment- the duck and sausage gumbo ($8).  Though this soup had a dark color and plenty of shredded meat, the flavor was extremely subtle and the texture was a little on the thin side.  Maybe a good "starter" gumbo for someone breaking into the Creole scene. 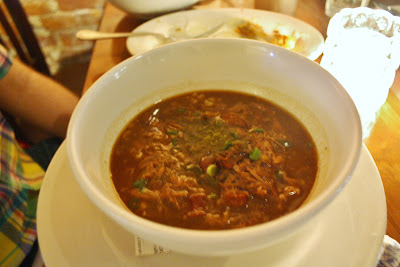 I wish we had bigger stomachs because all of the side dishes and the desserts sound terrific- definitely lots of the menu left to return for, and knowing Brendan Hartranft's other endeavors, the menu will evolve over time.  Though this place seems to be getting the most attention for their beer list, the food alone is well worth a visit!