As being from the South gave us authority on BBQ, perhaps having a German heritage gives us some authority on German food.** Brauhaus Schmitz opened sometime in the summer of 2009, and it has been on our list of places to check out for quite some time. A good way to try a new place without blowing the budget is stopping by for a weekend lunch- in this case, we also avoided the loud, drunken festivities that one can imagine occur nightly at any German "brewhouse".

By chance, this restaurant is mere doors down from Percy Street, at 7th and South. Sandwiched between Domino's and... something else... the front of the restaurant is brand new and totally inviting. The German flag hanging from the second level acts as a sort of beacon to those craving brats and/or giant beers served in boots. Around 1 PM the bar was already full but a sign directed us to seat ourselves at one of the many open tables on the first floor (there is also a second floor presumptively used when it gets busier). We chose a booth with benches that were kind of like low church pews... slightly awkward for eating. Our waitress was quite attentive, but all of the servers were dressed in unfortunate "authentic" dirndls that were almost obscene.. not cute. 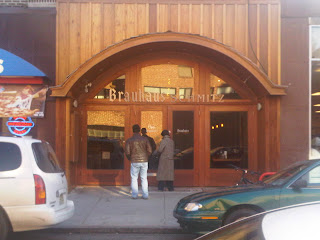 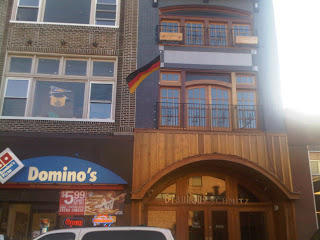 Our lunchmate and the two of us all ordered appetizers- there are bigger appetizer plates as well as "small plates", which at $3 seems like the best way to try some of the more typical German fare. We chose the Bavarian pretzel (laugenbrezel) and the rollmops on rye. For the former, as Philadelphia residents, we can appreciate a good soft pretzel, and this was certainly delicious. Not quite as dense as something you might find at a street cart, but more flavorful than a Philly Pretzel Co. pretzel. Our table had two small jars containing two types of mustard (housemade?), but the pretzel honestly needed no accompaniment (Dad- you would love this!). The rollmops was a much more unique dish- a little like tuna salad on a piece of bread, but with herring, big chunks of crispy pickles and softer potato, and a sour cream base. The rye bread could have used a little more substance to stand up to the weight of the fish- it was too soft to cut with a knife which made for messy eating. Our friend ordered chicken wings ($7) which seem like a copout just to offer a bar food option that anyone would like. He said they weren't anything special... if I remember correctly, the quote was "they're not that great". Neighboring diners had chosen one of the meat & cheese plates- a German charcuterie which looked totally delicious. But I suppose any combination of meat, cheese, pickles and bread would look totally delicious to me... 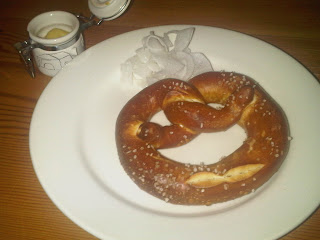 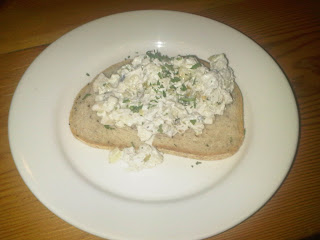 For the main course, two of us chose to go with standard German eats- brats and kraut ($10/sandwich, $11/plate). The sauerkraut was very different from what I usually eat (Ba-Tampte, straight out of the jar)- it was much drier, the cabbage was very finely chopped- overall, quite satisfying. The bratwurst was good as well, mild flavor with an almost grainy texture. Would like to try the other types of Wurst as they're supposed to vary in flavor intensities. I tried both types of mustard with the brat. The first looked Dijon-ish but had an almost bitter taste- not a fan. The other was a grainy, spicy-sweet mustard that was a hit. I prefer my mustard to be a bit more horseradishy, but this was a good enough substitute. The brat sandwiches are served on a crusty round white roll that seemed like a good choice to let the brat taste really come through. Sandwiches are also served with fries... I thought those were French? Anyhow, they were a little soggy and bland, and even worse, the ketchup had a good bit of curry powder added- unexpected and weird. 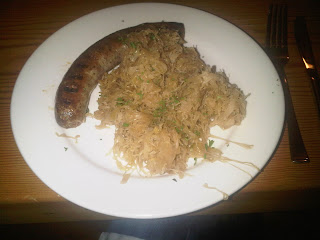 The "winner" of the dining experience was A's dish- the Gulasch mit Spatzle- spicy Hungarian beef stew served over Spatzle ($12). But what exactly is this "spatzle"? I would have described it as a crispy pasta-gnocchi sort of combination, formed into small pieces of an odd shape- kind of irregularly round (as you can see, hard to describe)- according to Wikipedia, they are egg noodles. The stew had a spicy flavor (but not hot spicy) with good chunks of meat and potato in a tomato based sauce. Tasty! 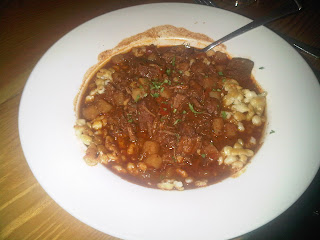 Overall, it was a unique restaurant experience, but I wouldn't run back (well.. maybe for the pretzel). The dinner menu seems quite a bit more extensive, with many additional entree options, mostly priced in the $20-$25 range. The place certainly has a heavier emphasis on drinking, but if Craig LaBan reviewed it (2 bells), its an eating establishment worth checking out.

** Note: We do not actually have ANY authority on German food.

http://www.brauhausschmitz.com/
Posted by Julianne at 5:54 PM