Philadelphia has a few "big name" chefs/restaurateurs: everyone knows of Stephen Starr (you're not even special if you can name all his restaurants), Jose Garces (yes, we have our own Iron Chef) and Georges Perrier. But one name gets less street-talk than the others: Marc Vetri. Maybe it's our peer group (mostly other "poor" students), but we know very few people who have had the pleasure of dining at either of his restaurants, Vetri or Osteria. Maybe it's his lack of showiness, which creates an air of exclusivity-- no big ads, no television shows, no gimmicky themes, no participation in Philadelphia's "Restaurant Week" (stay tuned for more to come on this annoying phenomena).

Regardless, he still has arguably some of the best food in the city- Philadelphia Magazine placed both Vetri and Osteria in the top 5 in their latest rankings of the city's restaurants, and Craig LaBan gives both restaurants high marks (the prestigious 4 bells for Vetri, and not-too-shabby 3 bells for Osteria). Not surprisingly, these restaurants have been on our list for awhile, but the $$$$$ on the menu have kept us away. Thankfully, Mr. Vetri has been so kind as to create a third restaurant in the city, which he models after the trattoria in Rome- more of a casual, neighborhood spot with simple dishes done well. Amis- which means "friend" in Italian- opened just this week near 13th and Pine, and the prices on the menu looked more up our alley. A reservation was made, a dining mate was procured, and there it was. Our first Vetri meal.

The restaurant space itself was nothing out of the ordinary, and seemed to follow along with some recent trends we've noticed- open industrial ceilings (exposed pipes and the like), an open kitchen (which, as we were tucked into the corner, we couldn't see at all), and touches like dish towel cloth napkins. It was a cute space, and definitely seemed to fit the bill for what Vetri was intending.

Our waiter was super nice and pretty funny (not saying much if you know us), although more than a little clingy (we should have counted how many times he came to check on us). He informed us that most of the plates were on the small side- and that he would guide our choices if he thought we were ordering too much or too little. Nice of him, particularly considering waiters practically work on commission. Apparently he was satisfied with our choices- we all chose to start with two small plates and one pasta as our main course. He warned us (?) that our first plates would arrive "so fast its almost hilarious" which seemed a bit odd... but thankfully all of the food arrived in a timely but not hurried manner. He also brought us the complimentary bread- small strips of fluffy foccacia topped with caramelized onions and roasted garlic. The table next to us never touched theirs, and I had to refrain myself from stealing it. Good stuff. 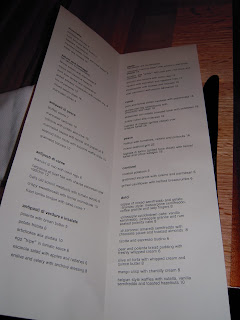 We didn't do a great job of sampling from the entire menu- both the bruschetta and salumi portions were left untouched. Also of note, the menu was slightly different (both in terms of items and prices) than the sample menu we had viewed online ahead of time. Most of the small plates will run from $8 to $12, but of course you can pick out the "cheap" ones. We sampled one antipasti di pesce and three antipasti di carne between the three of us. The marinated seppia with fennel and grapefruit ($6) was exactly that- nothing special about this dish. It would certainly not be ordered again. It wasn't bad, just sort of bland- chopped squid pieces with the aforementioned fennel and grapefruit. Good texture if you like squid, but little flavor. 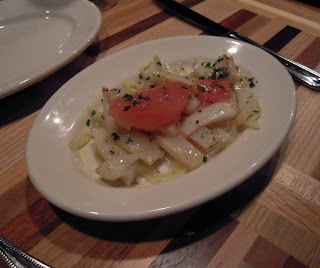 The meat appetizers were definitely favored- particularly the polpettine with tomato potato ($8). Tomato potato? Yeah, we were confused too. But basically, that's what it was! Three meatballs (but these were beyond your average meatball, maybe due to an excessive amount of cheese mixed in) over a slow cooked mash of tomato and potato. The flavor of the tomato was almost outrageous- it's January! How do they do this? 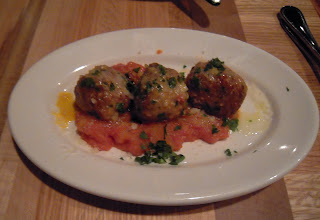 The arancini di riso with meat ragu ($6) was also a hit, although on first glance we almost sent them back- where was the promised meat sauce? Two fried risotto balls sat in an otherwise empty dish. One bite into them revealed the secret- it was hidden inside the outer shell of soft rice. The outer crust was reminiscent of hushpuppy- crisp but without that deep-fried greasy texture. Very flavorful- they looked small, but they were so rich that the portion was perfectly satisfying. 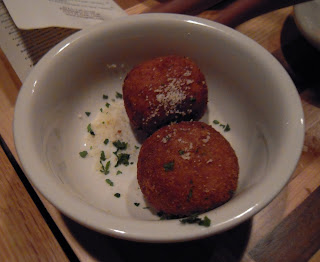 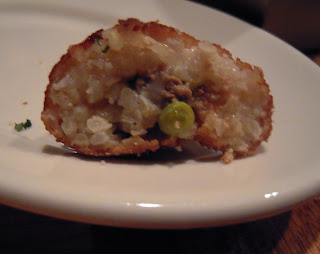 We also tried the crispy sweetbreads with fennel marmalade ($10), another small portion that was perhaps overly rich. The subtlety of the "I've been in the deep fryer" that worked for the arancini unfortunately wasn't passed to the sweetbreads. 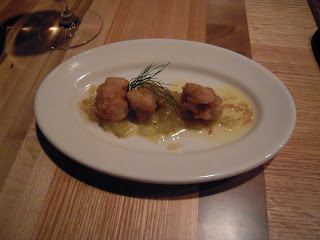 We all chose a pasta as a main dish, thereby also leaving the meat and fish entree dishes unexplored. We would definitely recommend this if you see a pasta dish that interests you- the portions are large enough for an entree, the pasta is all housemade (ie extra delicious), and most of them contain meat or fish, so you won't miss out on your protein. Perhaps most importantly, they're a little less expensive- all of the pastas are $14, while the other entrees range from $16-26. The pasta dishes were definitely the highlights of our meals (or maybe the desserts were.. hmm..). Two of us chose the rigatoni with swordfish and eggplant fries, and J ordered the gnocchi alla romana with oxtail ragu. The rigatoni was pretty much to die for.. lovely pasta pieces in a whole-tomato style sauce, with bite-sized perfectly cooked chunks of swordfish, fresh basil leaves, and the eggplant fries. Ohhh, the eggplant fries. I almost ordered an extra side of these fries. They somehow magically made eggplant taste like fried plantains. One of the most delicious things I've ever eaten. The sauce on the dish was also ridiculously good, with great flavor- as a whole it looked like something we could put together at home, but the flavor would probably be impossible to capture. 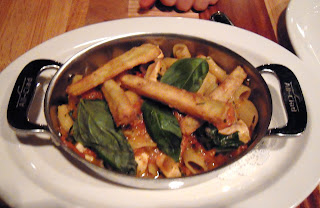 The gnocchi was not the traditional potato pasta we know- perhaps we missed out on what "alla romana" means, but we're now pretty sure it means "delight." The pasta seemed to be made mostly of cheese, and came in two palm sized (we have child hands, so with this reference they weren't huge) discs covered in the meaty ragu. Talk about rich... a smaller portion than the rigatoni, but perhaps it was a "less is more" kind of dish. She also ordered a side of escarole, braised with a parmesan topping ($6). Most anything would be great if you topped it with quality cheese, but this also had that super flavor going for it that we were continually amazed with throughout the meal. 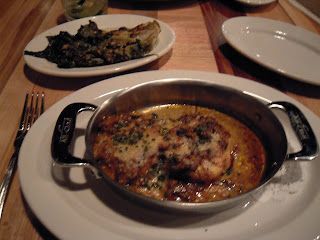 After all of that food, we still had room for dessert- and we highly recommend it. We all ordered something different, but once they arrived I couldn't think about much beyond what was going into my mouth- a play on "pineapple upside down cake." No pineapple was directly involved in this, nor was cake. Pineapple flavored granita (you know, the shaved ice type dessert) sat pebbled over a scoop of vanilla semifreddo (it's like ice cream.. on crack) and a piece of extremely sugary, dense.. ok, maybe it was cake. But it was caramelized, and so sweet it melted in your mouth. We've heard people describe some desserts as just too much- perhaps many of them would say that about this one. Personally, we can handle sugar. It was definitely worth the $8 price tag. 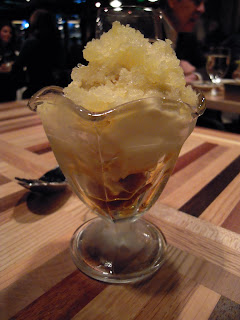 The ricotta and espresso budino ($6) was an authentic Italian dessert- sort of like pudding, but way creamier. And just better. A good cap to the meal, particularly because of the bitter espresso flavor- no need for a cappucino, thanks. 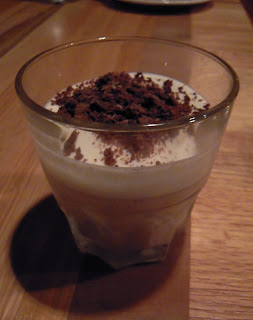 The mango crisp was ordered by our dining companion, although we didn't taste any. It came nestled at the bottom of a small All-Clad pan with handles- giving the feeling that you were eating right out of the baking dish- and had a liquidy cream coating on top. It was decided that vanilla ice cream would be a better pair. 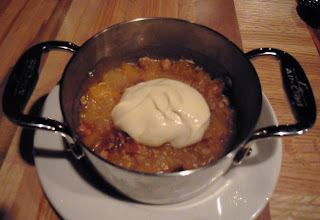 The dessert pushed us towards the edge of food coma, which perhaps helped in dealing with paying the check- even at his "cheaper" restaurant, we still put $100 in Mr. Vetri's pocket. For a freshly opened spot (we were there the day after it opened), the service was adequate, the food was great, and business sure was booming. We were glad to be one of the first to check it out, and may be back at some point to try some of the other dishes and to return to those we will surely be craving again soon.

Amis
13th Street & Waverly Street
Posted by Julianne at 10:20 AM